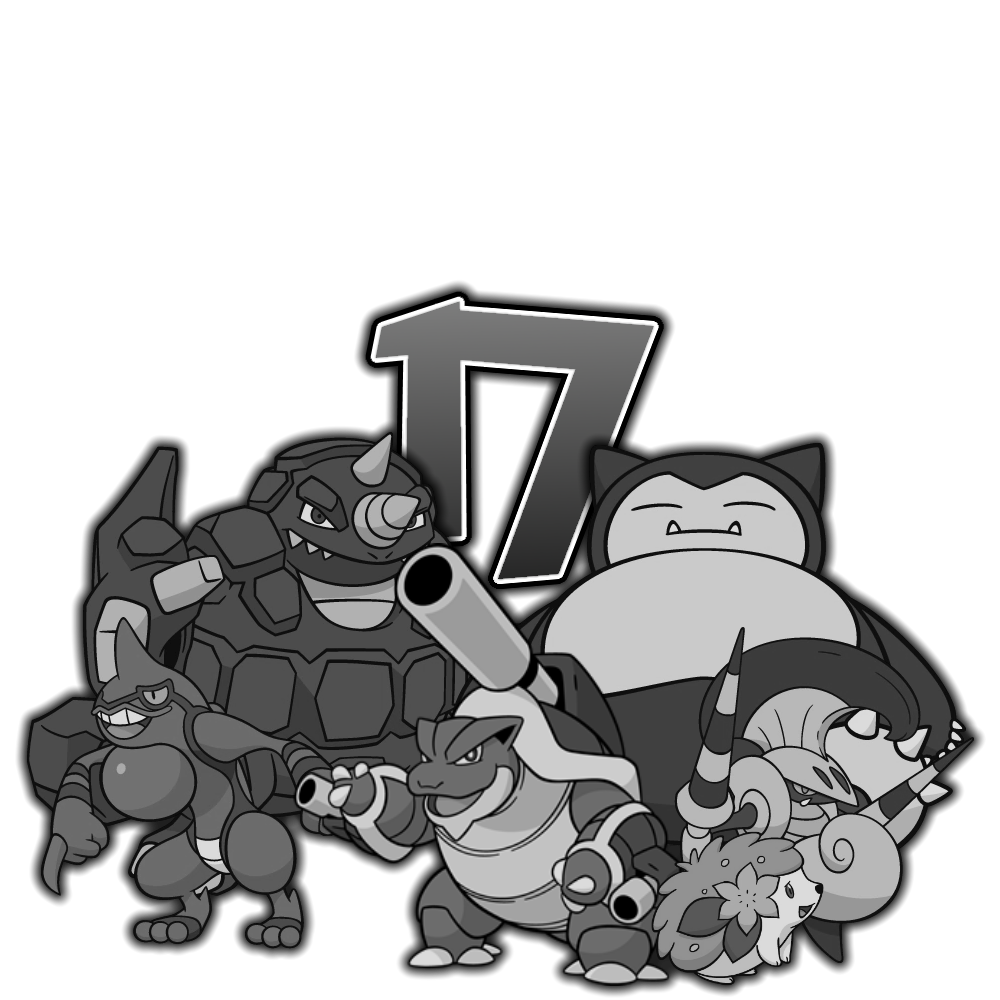 What's going on everybody? Today I wanna showcase a team I built a little while back. I originally built this team because I wanted to use one of my favorite viable Pokemon in the tier, which is Toxicroak. I used this team round 1 of RU Open and it helped me win one of my matches. I've let a couple of my friends use it also and they've seen decent success on ladder with it, mostly being used around the 1500 range.

As I said in the title, the Pokemon I decided to build around is Toxicroak. This Pokemon has an amazing offensive typing in Poison/Fighting. This mon is amazing at keeping bulky waters like Milotic in check with Dry Skin, and wearing them down with Gunk Shot, and Drain Punch. Knock Off is also an option to hit Bronzong, but due to having Escavalier on this team to trap Bronzong and KO it with Megahorn, I don't need it. I'm also able to revenge Virizion with Toxicroak due to it being Choice Scarfed. if you don't miss you always kill. This Pokemon provides a great switch-in to bulky waters for this team, It also is able to revenge things like Virizion, Banded Zygarde 10%, Roserade, etc. Earthquake is a spectacular move on Scarf Toxicroak to hit Salazzle.

Mega Blastoise is a phenomenal spinner in the tier at the moment. This pokemon is able to do so much such as switching into Nidoqueen, Rhyperior, and Mega Steelix, removing their hazards and having the power to KO them with Scald. This mon provides an amazing check to those mons for this team, working in tandem with Escavalier being able to switch into strong fire attacks for it, and Escavalier wallbreaks for Blastoise in return. Blastoise is also able to eliminate Spin-Blockers like Doublade, and Mismagius if predicted properly.

Snorlax is a great Pokemon in the current RU Metagame. Being able to serve as a wall VS Special Attackers like Salazzle, Roserade, Rotom, Galvantula, and Gardevoir. While also being able to beat a ton of Physical Attackers after a Curse such as Entei, Flygon, Doublade, etc. Snorlax provides a good switchin to Fire Types for the team, helping out Escavalier, and Shaymin in the process.

Escavalier, I consider this mon personally to be one of the most potent Wallbreakers in the tier right now. This Pokemon is able to beat Bronzong 1v1, you can switch into it due to being immune to Toxic, and taking nothing from any of it's attacks. Megahorn always does a major amount of damage crippling Bronzong and not letting it switch in after rocks, you can Pursuit trap Bronzong on a predicted swap and do a nasty amount of damage. Escavalier is also able to beat things like unboosted Snorlax, Slowbro, Slowking, basically base 30 Speed Pokemon due to running the amount of EVs needed to outpace them. Escavalier is able to switch into mons like Gardevoir and KO or chip with Pursuit, and Iron Head. This mon provides alot of Wallbreaking power for this team, eliminating a ton of Special walls so the team doesn't need to worry about them.

Rhyperior is a very good Stealth Rocker in RU right now, able to easily switch into passive Pokemon such as Diancie, and Registeel, Fire Types such as Entei, and Salazzle, and reliably get Stealth Rock up while eliminating those threats. Running coverage like Ice Punch hits Pokemon like Flygon, Shaymin, Virizion, and Gligar on the switch crippling or even outright KOing them. It's best to force switches with Rhyperior and get up Stealth Rocks due to it being slow and not ouspeeding much. This pokemon works as a really good Entei answer for this team being able to take anything it has to throw at it and getting up rocks, while also KOing or heavily chipping it.

Shaymin is one of the best offensive Grass types RU has to offer. Being able to beat a massive amount of Pokemon with it's vast amount of coverage. I opted to run Air Slash on this team to beat Virizion. Shaymin is able to beat Pokemon such as Rhyperior, Moltres, non Speed Boost Yanmega, Virizion, Milotic, Mega Blastoise, and more. Grassium Z is used to always KO things like Milotic with Seed Flare, which you otherwise 2HKO. Shaymin is able to beat the bulky waters Blastoise struggles with, making its job alot easier.

This set its really just your bread and butter Toxicroak. Earthquake is used to hit Salazzle, which would otherwise win VS you. Low Kick is for Steels like Registeel and Dark Types like Pangoro, etc. Gunk Shot is your strongest stab move used to hit Grasses and Fairies. The EV Spread is just your simple 252 252 4 that you would run on most sweepers / scarfers. This mon is absolutely amazing in the current metagame with all of the waters and grasses roaming in the tier that it's able to beat. This mon provides a Scarfer, and an answer to Roserade, Virizion, Milotic, and more to the team which is extremely valuable in a fast paced metagame. Choice Scarf lets it beat the mons I named prior and puts Toxicroak at a high speed tier making it an amazing revenge killer.

Mega Blastoise is the best Rapid Spinner in the RU Metagame at the moment. This pokemon is able to beat Spinblockers like Mismagius, and Doublade if predicted correctly with Dark Pulse making it easier to remove hazards, putting this team in a better position vs mons that rely on Hazard Stacking like Flygon, Zygarde, Barbaracle, etc. The EV spread helps you check Entei and comfortably switch into it being able to KO it with Scald after Stealth Rock damage. Blastoise relies on Toxicroak, Escavalier, and shaymin to eliminate things that give it a hard time fulfilling its role on the team such as bulky waters, and Grass types like Roserade, Virizion, Milotic, Opposing Blastoise, etc.

I added snorlax to the team because I needed a true answer to Specially offensive Fire Types, Ice Types, and in general just Special attackers as a whole. Snorlax is able to wall some special attackers like Ninetales, Roserade, Salazzle, Rotom, Shaymin, Galvantula, Gardevoir, and alot more. Snorlax is also able to check Entei after a Curse and beat other mons like Flygon, and Doublade. This takes a major load off of Escavalier, and Shaymin allowing them to fill their roles on the team as Offensive Wallbreakers.

Escavalier fit on the team because I needed a Pursuit trapper and a Wallbreaker, Escavalier is great at both of these. Choice Banded Escavalier is able to kill Bronzong on a roll as stated in the calcs above. Escavalier is also able to beat special attackers like Gardevoir chipping it down with Iron Head, or Pursuiting it on an attempted swap. Escavalier works in tandem with Snorlax, and Blastoise due to them handling the Fire Types Escavalier doesn't wanna deal with such as Entei, Ninetales, Salazzle, etc. In return Escavalier beats Bronzong which helps Snorlax immensely due to being walled by it. Escavalier can also beat Shaymin if it lacks HP Fire, helping out Blastoise in the long run. The spread on Escavalier helps you outspeed base 30 mons like Snorlax, Slowbro, and Slowking.

Rhyperior is a very reliable Stealth Rocker in the current RU metagame. I chose to use it because it is a spectacular answer to Entei and other Fire Types that roam the tier. Rhyperior is able to force switches and get up rocks vs Pokemon like Entei, and assorted Fire Types like Rotom Heat. Ice Punch is able to hit mons like Virizion, Flygon, Roserade, Rotom Mow, and Gligar on the switch being the preferred coverage move on it due to how Viriz weak this team really is. If one check falls like Toxicroak Or Shaymin i have nothing. Rhyperior can switch into Fire Type moves, synergizing well with Escavalier for that reason. Toxicroak, and Shaymin are able to deal with the bulky waters that give Rhyperior trouble throughout the game.

I decided to use Shaymin on this team to break things like bulky waters and ground types. Shaymin is able to beat Zygarde 10%, Virizion due to me opting to run Air Slash, Milotic, Mega Blastoise, Rhyperior, Barbaracle (if Z is used), Moltres, and Yanemega (lacking Speed Boost). Shaymin must use it's Z Move VS Milotic due to normal Seed Flare being a 2HKO even after rocks. Shaymin is able to help Mega Blastoise by killing the bulky waters that are an issue for it to get around.

This thing could literally 6-0 me if I don't play around it right. You're forced to make a sacrifice so it wastes it's Z Move, then go into Shaymin and handle it from there, if it's sub that makes the issue even worse. Toxicroak handles it, but if it dies it's basically over from that point unless you play shaymin perfectly.

These two are extremely dangerous for this team if they get to set up, especially if the Zygarde is Dragonium Z. These 2 can run rampant if I don't predict them switching in and make the correct play of going Shaymin, or in Flygons case Ice Punching w Rhyperior on the swap.

This mon is scary as fuck if I lose Shaymin, or Toxicroak early. It's able to run a train on this team without my measures being available.

This thing is somewhat of a threat. You can run HP Fire on Shaymin to lessen its potential to kill things, but then again this mon in general requires outplaying to beat with this squad.

I just wanna get sappy here and mention a few friends that have helped me build, and are just amazing people in general.

Jordy : You been there for me all the time and even helped me with the RMT I'm writing rn. I couldn't ask for a better best friend.

wmartinez101 : Clean shaven William! Nah but fr you're mad cool bro. We should talk more often and do another ADV Wi-Fi battle!!!!

HarrisIsAwesome : I give you so much shit yet you still talk to me and call me a friend. Thanks for helping me build this team somewhat basically i should say that about all of Leo's server bc ya'll recommended some fire shit for this squad. Love you bro

mellowyellowhd : You were the first smogon forums user I've ever met and I'm glad to be in your server still and call you one of my true friends bro.

The Hunters Prowl : Love you, finesse some e-thots and make me proud

Wanna thank all of Draco too for welcoming me into their server w warm hearts, glad to call ya'll friends.

bebo7788 said:
Alright so this looks like an amazing RU team and I think I have some slight changes

besides all those changes the team is fantastic!
Click to expand...

Specs Gardevoir isn't a huge threat due to me also having Snorlax which takes nothing from it. Even if it decides to psyshock me I get to Curse which lessens the damage. forcing a swap even if it wants to Trick me.

Leftovers recovery​
HP Rock is a decent coverage move because this team was built when Moltres is in the tier. It's also able to hit Specs Yanemega incase it tries to switch-in predicting seed flare.

Will change the shoutouts though :]

Omg great team Loom, it sucks that you stole it from Vizually though.

esdeflex said:
Omg great team Loom, it sucks that you stole it from Vizually though.
Click to expand...

That's a fact bro :[.... Cant believe I've already stolen two of my RMT's from him because he used them on his channel so that automatically makes them stolen..... I'm just a bad player :(
You must log in or register to reply here.
Share:
Reddit Pinterest Tumblr WhatsApp Email Link