damn, watch them cancel the season again sometime this week

NBA has released approved statements that players can use in the back of their jerseys, which are

Black Lives Matter; Say Their Names; Vote; I Can't Breathe; Justice; Peace; Equality; Freedom; Enough; Power to the People; Justice Now; Say Her Name; Sí Se Puede (Yes We Can); Liberation; See Us; Hear Us; Respect Us; Love Us; Listen; Listen to Us; Stand Up; Ally; Anti-Racist; I Am A Man; Speak Up; How Many More; Group Economics; Education Reform; and Mentor.

love to see it 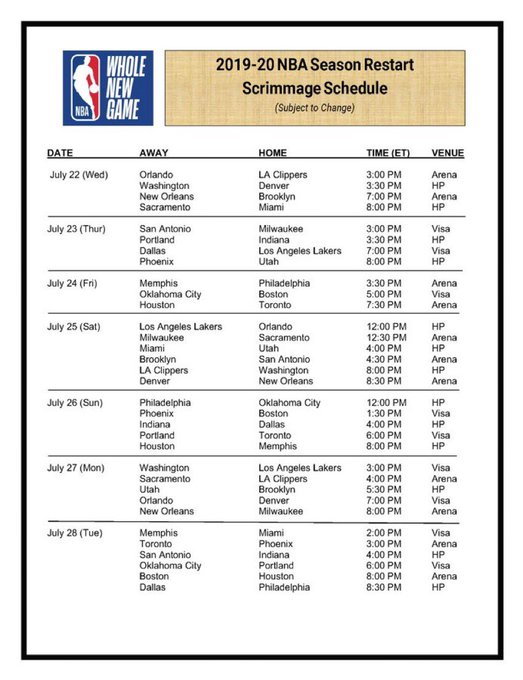 scrimmage schedule is up- likely won't be televised but w/e
also Landry Shamet is tested positive, first tough blow for the clips

Lazy_bread27 said:
Who all is sitting out Orlando?
Click to expand...

Dwight is in. Lucky for us, it would've been tough losing him too.

Bradley Beal is out due to a shoulder injury (the Wizards cannot replace him).
Nets doctors have decided to sit Spencer Dinwiddie.

EDIT: Aaaaaaaaaaaaaaand Taurean Prince is out for the Nets too. The Nets realize they can't really tank this, right?
Last edited: Jul 7, 2020

5 things to watch out for when the season restarts

Fuck I love basketball, today was a good day.

Also I wrote two more articles this week, but didn't wanna spam you guys - this thread has been surprisingly quiet!

-kawhi and PG looking great, no signs of rust detected and had great games overall
-lebron had a shit game offensively- played fantastic defense and the game winning putback at the end, but he could do better overall
-AD carrying the lakers on the back
-DION WAITERS is legit and he's looking comfortable out there. hope he keeps this up gotta support a fellow heat player
-rest of the clips looking solid. played with no trezz and lou too

heatvice said:
-rest of the clips looking solid. played with no trezz and lou too
Click to expand...

This, but we also exposed Lou defensively down the stretch in March when we beat them. No Montrezl hurts the Clippers more when playing the Lakers.

Also did anyone catch Kawhi calling for the switch so he could go at Danny Green instead of Kuz? HAS KUZ MADE IT DEFENSIVELY???

in a game of surprises last night (lakers' bench outscoring the raptors' bench 50-15 for one holy shit), the biggest surprise was watching the lakers just give up like 2/3s of the way into the 4th quarter. I don't know whether it was 'the raps who have nobody to get them a bucket in crunch time' exploding for that late run, or whether lebron thought back to his beating the clippers and thought 'meh, that's good enough'. really sad way for what was otherwise a phenomenal game to end. oh well guess the defending champs reminded everyone that they're here to stay and it'll be fun to see how they keep rolling to go forwards.

oh and @ every lakers fan saying the raptors aren't a real contender - you could erase the raptors' 13-0 run to open the game and they still would have won.

Lakers just need to clinch #1 seed vs the Jazz so they have 5 games to figure out how to properly get JR, Dion, and Markieff in the system.

don't forget jr being jr! also say what you want about danny green but he was only -11 which was ironically the best mark of the lakers' starters (and nba teams as a whole only shoot 33.7% from 3 - 33.6% now, actually - vs the raptors all season, best mark in the league etc etc).

in a broader context, I won't lie and say I was all that thrilled with the way the game went and seeing key bench pieces like powell and ibaka being pushed around sucks (and probably needs to be addressed going forwards). ironic how the lakers' depth looked like actual nba players and the raptors' vaunted rotation struggled to stay on the floor at times. that said though, the raptors proved that their alleged rebounding weakness was a construct by outrebounding a much bigger team 51-40, and they held the unguardable anthony davis at bay not two days after he sheared through the clippers' defenses in such dominating fashion. also og anunoby's work on lebron was amazing, almost kawhi-caliber if I was to be hyperbolic and he cut loose on offense particularly during the raptors' big runs, not only knocking down shots and catching lobs but flashing some of his off-the-dribble game and getting to the rim from time to time. if he keeps progressing like this future all-star appearances are definitely in the cards.

lastly as much as I ragged the lakers for quitting on the floor this game definitely felt like a playoff matchup - low-scoring but intense and cerebral in a way that felt like a high-speed chess match full of back-and-forths. there were moments when I thought the lakers would start grinding the raptors down or the raptors would pull away but the other team responded each and every time up until the very end. also it's nice to see that the raptors can kill mismatches and get iso buckets even down the stretch against a top5 defense, it bodes well for the actual playoffs. in the meantime I'm going to have to look up how to inject the entirety fourth quarter into my veins because it was really that good.

give more mins to dion

as for my own team- big win vs a great team in the nuggets. Adebayo and Butler was putting in work with an efficient 22 for each, Robinson is hitting them threes and defense did a good job slowing down Jokic and MPJ

I mean, the Nuggets did only have 3 guards available lol.

But damn, I missed basketball.

Zion for rook of year? Thoughts?

Not a chance, Ja will be unanimous.

blazers are closing in that 8th seed. nurkic have been outstanding since his return man, had 30 the other night and 18p/19r today. he looked p comfortable out there so hoping he keeps it up

another big win for the heat over the celtics w/o jimmy butler- we were hitting them threes, great games from bam, duncan and dragic. minor ankle sprain for dragic hurts though

It should be Ja Morant. Morant has been better, and he's played more games.

Stallion said:
5 things to watch out for when the season restarts
Click to expand...

So my Raptors take (point 4) is looking pretty good.

Awards finalists have been announced. 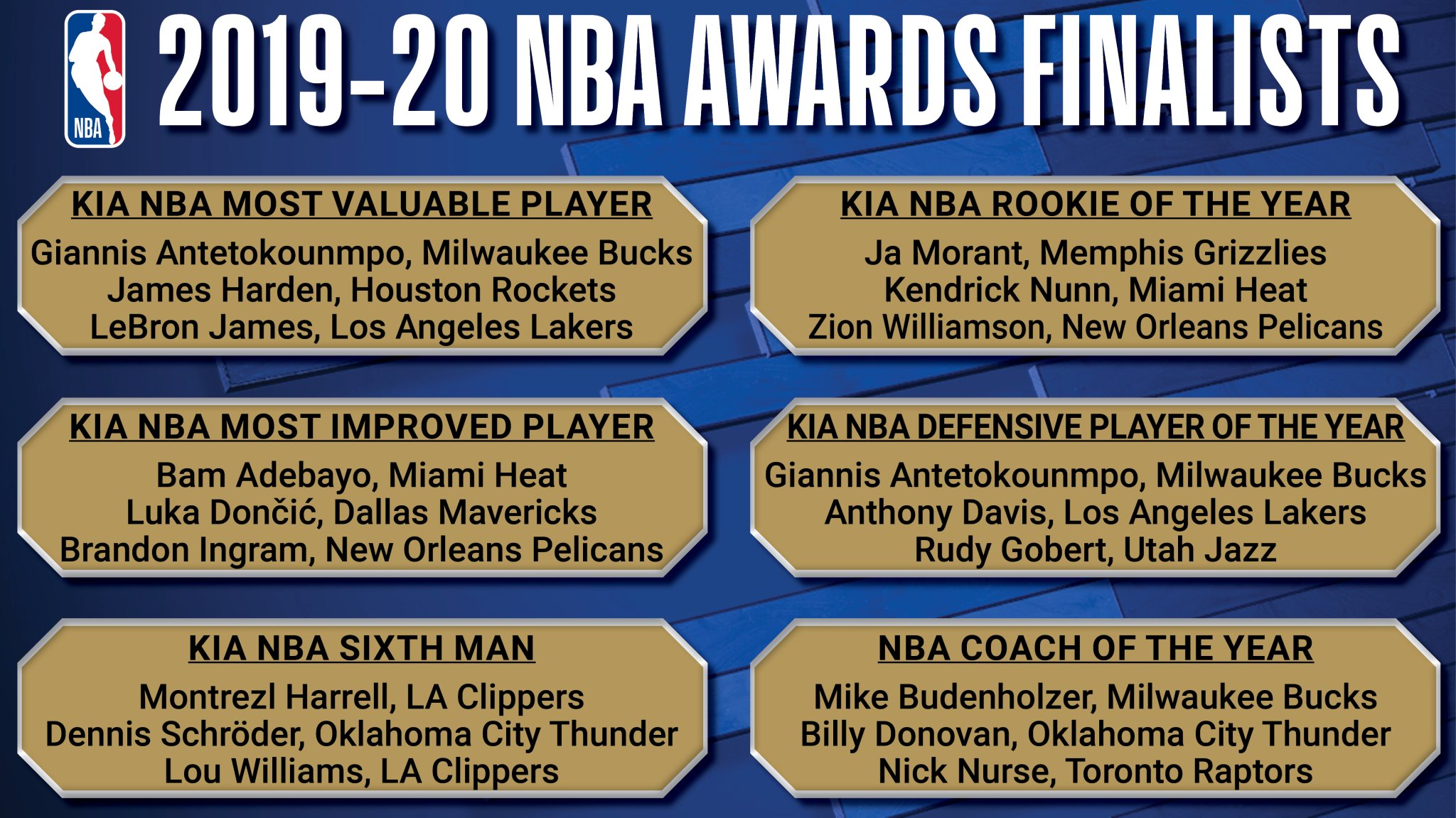