Just copy pasting most of JackTheGordie's thread from last year

Two Brackets; One for the whole playoffs, one revised bracket after every week. I'd recommend both typing the brackets out on here, while also using this site (http://playtronics.net/nfl/bracket) some of us used last year as another means of filling it out for everyone else to see. Ill start things off with my picks for example/formatting (ya'll already know who I picked).

1. Failure to submit a prediction by gametime will result in a forfeit of that game: no exceptions. If the game kicks off at 1:00 EST and you submit at 1:02 EST, tough shit.

2. In addition to this, any edits to posts after the first games kick off will result in the forfeiting of all prior games. If you make your guesses for the saturday games and sunday games in the same post, then decide to edit your sunday afternoon pick on sunday morning by editing that post, you will be given losses for the two saturday games. Instead, make a new post with your changed picks.

3. Do NOT get into discussions/debates with other peoples' picks. No flaming, no bashing, no "omg why did you pick them" etc. Tips are OK, but it's preferable to keep them in the NFL discussion thread instead.

Part 1: Weekly Picks
This part's easy. For each week after the first (or the first too, if you prefer) the matchups for the week will be posted in the thread. Simply choose the winners for each matchup sometime between when they're posted (Sunday night) to when the first game the next week is played (Saturday afternoon/night). Each correct pick is worth one point.

Part 2: Overall Picks
For this part, you have to pick the overall outcome of every playoff game, from the wild card games to the Super Bowl. There are 11 games, and 1 point is awarded for choosing the winner of each game (only the winner is necessary, ie it does not matter if the #1 seeded Patriots beat the #5 seeded Bengals or the #6 seeded Ravens, you still get 1 point if the Patriots win).

Since all four matchups are the same in week 1, you'll only have to post those once. However, after that, take special note of the seedings! The lowest remaining seed in each conference plays the #1 seed after the wild card round, and the highest remaining seed (3-5) plays the #2 seed. The higher seed always plays at home, so remember that while making your picks. If you do not follow the seedings carefully, you're liable to fuck it all up and not be awarded any points from those games.

AFatMudkip said:
gonna do my picks but why you gotta do my san diego LA chargers like that and not even put em in the poll

All my picks will be this for the first week I’ll write it up later.

Posting a screenshot of my picks from another site so y'all know it's from before any games this weekend: 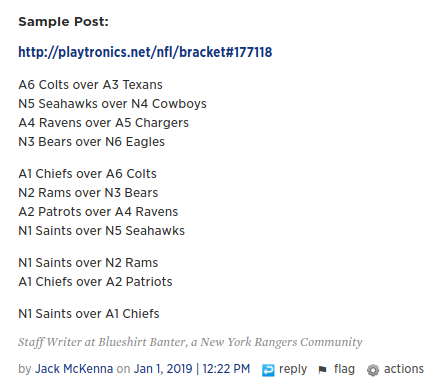 Well, that was a bad week.

Chiefs over Colts
Chargers over Patriots

Eagles over Saints (believe in the BDN conspiracy)
Rams over Cowboys

Well, rip My NFC predictions. I'm looking good on the AFC side of things, tho (I'm sticking with the same predicts for the AFC, I'm just posting them down below so it will be easier to keep track of them).

Huge shoutout to Parkey ruining my round

Colts vs. Chiefs
Cowboys vs. Rams

Chargers vs. Patriots
Eagles vs. Saints