Merry Christmas, everybody! By now, it should be well into Christmas Day worldwide, and it's time to reveal the pairings for Secret Santa!

You are now free to contact your gift recipient, publicly or privately, to get their gift to them. Feel free to post what you received in the thread! Some of these gifts blew me away, so cheers to all of you!

Also feel free to coordinate with Eisenherz so as to get your participation prize when he gets back from holiday, and I'll get my Exeggutor to all players of LGPE!

Merry Christmas, all! Thanks so much for participating; it warmed my heart to see all this generosity a second year around.

Well, I guess I'll go first and say what I received from BlackoutSLM.

I've got to say that my face was a picture when I saw the shiny Solrock (Barsoom is a great nickname) and even more of a picture when seeing KingGhidorah the shiny Hydregion (all those Gen 6 ribbons). Then to top it all off, Hazel the cute little Seedot arrived and I currently have a massive grin all over my face looking at all of them as well as scratching my head over how two of my favourite shinies were figured out :)

Thank you so much BlackoutSLM for my gifts as well as Ullar for organising this. I also haven't forgotten you, Eisenherz, for all the mons I've received from your giveaways.

Happy Christmas to everyone :)

I just received my gift from NixFaux which was an awesome shiny Rotom in an Ultra ball which is my favorite type of ball. Also, shiny Rotom is a shade of red which is also the base for my favorite color which is Burgundy. Not only that, but as we all know, Rotom was first introduced in the 4th generation games which took place in Sinnoh, my favorite region and Rotom is a half ghost type being one of my favorite types. Overall, I am very very happy with my gift. So I just want to say thank you NixFaux and all of you who made this awesome event possible :)

I've already thanked them in private, but I'd like to give thanks again to Hare_vs_Tortoise for their fantastic shiny Froakie that they have given to me. I love it's nickname, and was greatly considering shiny hunting for one my own. Additional thanks go to Ullar and Eisenherz for organizing and providing gifts for everyone.

Gallazard gave me a beautiful HP Ice Camerupt in an Heavy ball (my favorite ball).
I love it! Numel and Camerupt hold a special place in my heart as they were the first Hoenn pokemon i saw back when i bought my first Ruby and Sapphire TCG pack. :)

I want to thank Blueforce for the amazing gifts!!! He gave the blue Gastrodon, such a cool Pokémon, specially in a beast ball. He also gave me a Latias, another cool Pokémon that perfectly matches the love ball.
Also thanks to Ullar and all the participants!!!

I was paired with LordDunsparce, with both of us as eachother's giftee. I have to say, i'm very impressed because he went out of his way to prepare not just one, but two gift Pokemon for our exchange: Both of these totally fit my aesthetic, they're perfect. I'm also a sucker for nicknamed Pokemon, they just sweetened the pot for me, especially Mizuchi. I didn't know LordDunsparce had a second Pokemon for me, my only regret is that I didn't prepare two myself, and decided to send him my token Latias along with Gastrodon.

Thanks to my man Ullar for hosting. I suppose that makes this an annual thing now, huh?

It’s a very special gift the one I received today from my friend Xen, a Shiny Wishmaker Jirachi from Gen 3! It has a Careful nature and comes with the exclusive moves: Body Slam, Mimic, Dynamic Punch and Power-Up Punch. It’s already been trained with the classic 252 HP / 200 SpD / 56 Spe EV spread and ribboned! Estella is a Spanish name of Latin origin meaning “star”. It’s absolutely perfect and I would like to thank Xen once again for this extremely rare Pokémon :) ~
I would also like to thank Ullar for hosting the event this year: thanks for making this possible!

Draelok gave me an awesome shiny Flygon! Not only is it my favorite colors (blue and green) but Flygon is also from Hoenn, which is one of my favorite regions! I’ve always thought Flygon was a really cool Pokémon too, being the first Ground/Dragon type. So thanks again to Draelok for getting me such a great gift!

I would also like to thank Ullar and Eisenherz for organizing this giveaway and helping to make all of this possible!

Eisenherz gave me three pokemon that I am very thankful for, alot of thought went into these pokes and I am very grateful for his gifts; here are the pokes 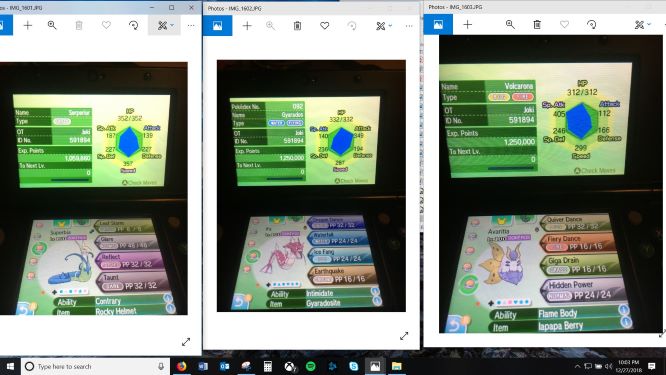 Also here are his words on the pokemon;

Eisenherz said:
I thought it was pretty cool that your 3 favourite types were the starter types, so I decided to gift you a trio of Pokémon! I chose Volcarona, Gyarados and Serperior firstly because they're good Pokémon on BSS, but Volcarona in particular because I thought you would like its shiny orange colour, and the shiny Gyarados to represent the Lake of Rage's from Gen 2.

I made sure all of them are in regular Pokéballs since that seems important to you, and I named them from the original Latin names of 3 cardinal sins I thought they represented pretty well: Ira is Wrath (I doubt this one needs an explanation!), Avaritia is Greed (representing the temptation to be greedy and set up "just one more Quiver Dance" before sweeping) and Superbia is Pride (which also seemed natural to me from looking at Serperior's face!). If you would prefer different nicknames, I can always use the name rater in my game, so just let me know.

Received my gift from King Halcyon earlier, which was an event, battle-ready Genesect! Bug is one of my favorite Pokemon types, and Genesect also happens to originate from one of my favorite regions and games in the series. I'm also a sucker for hyper-offense teams and have been known to favor VoltTurn teams too, which makes Genesect a perfect fit to my playstyle. Definitely an awesome Pokemon and solid addition to my Ubers team.

Thanks again to King Halcyon for the Genesect, and thanks as well to Ullar and Eisenherz for organizing and hosting Secret Santa this year. Merry (late) Christmas, and Happy New Year. :)

gaarasword got me a BR shiny Rayquaza! One of my top favorite Pokemon (and let's be honest here, best shiny by far)

Thanks to Ullar, Eisen, and most of all gaarasword for this wonderful Secret Santa!

LerisaBebelabs got me a nice shiny Houndoom with Houndoomite which looks cool and blue.

Thanks everyone for the good times!

Tapu Koko Loko got me a Woobat with perfect IV's and good egg moves, which I may use in my breeding projects.
Thanks to Ullar, Eisen, Tapu Koko Loko and all participants for this event and Happy New Year everyone!

Moderator
GC7 gifted me a Leafeon (best Eeeveelution!) in a beautiful Premier Ball, 5 IVs and fully trained at level 100! Thanks a lot to him for the nice and thoughtful gift!

For anyone who hasn't received their Exeggutor participation gift yet, feel free to deposit something of your choice on the GTS asking for a level 100 Exeggutor and posting your deposit here, I'll get to them as soon as I can!

Thanks a lot to Ullar for taking initiative and organizing the Secret Santa, and Happy New Year to everyone! :D

Moderator
I've been sending them as they get posted, but just to be sure no one misses it, all sent Tapu Koko Loko, Gallazard and gaarasword!

Not in my dex yet so not able to specify gender I'm afraid.