Whats going on everybody, TheDoff here with a team I've had a lot of success with. I'm particularly happy with how it came out because of how it manages to give the spotlight to some of the least used mons in OU that are huge threats nonetheless in the right conditions. Please do enjoy this tune by Deorro while reading through, as it kind of summarizes the fear this team can cause if played well.

The Team at a glance:

Mega Aerodactyl is one of the few megas that didn't manage to stay in OU for very long. This is most likely due to its poor movepool, and having to rely on a 60bp move and a 80% accurate one in terms of STAB. However with its insane base Speed and above average Atk and tough-claws boosted coverage moves it manages to be a very big threat to frail offensive teams. Stone Edge is the obvious STAB and the move it's going to try to spam most of the time. Double fang coverage to blow back 4x weaknesses such as lando-t and ferro, while Aerial Ace is the best option Aero gets in terms of flying STAB. At least it's boosted by tought-claws so it effectively is 80bp.

This thing is becoming rarer and rarer in OU and thank god for that. Comfortable switch-ins are virtually nonexistent as anything that doesnt get 2HKOd is going to be vulnerable to taunt. This set beats Chansey 1v1 and thats crazy for a special attacker. I tried venoshock as a gimmick with toxic spikes Tentacruel, it was fun and definitely worked at times, but sludge wave is just way more reliable. Ghost is an amazing offensive typing in this current meta, and focus blast is a necessary evil for Tran and the likes. Taunt > Sub because with life orb the recoil damage really starts to add up and cut its longevity.

The main special wall and first hazard setter of the team, as well as spinner, scald spammer and setup preventer. This is the team's main answer to Keldeo, Volcarona, Volcanion and Heatran, which otherwise have the potential to steamroll this team. The set is relatively standard with heavy Def and SpD investment to be able to tank secret swords too. The 24 Spe evs are to speed creep defensive landos that speed creep Volcanion. Not too likely to come into play but 24 mere evs are worth a surprise scald for about 50% damage. Liquid Ooze was the chosen ability mostly because the other two are garbage on him.

"Put yo hands in the air, if yous a true playa"

Nice and standard Tankchomp. He is the Big Poppa and he runs this bitch. Come in on phisical moves, deal passive damage, set up rocks and phase out. This is the team's main answer to M-Scizor as it is otherwise a huge threat. Bonus points for the ones that actually stay in to get Blasted in the face. D-tail is amazing here for phasing and racking up damage from hazards, EQ for Trans and just dealing good damage in general. Stealth Rocks do what they always do. Speed Evs are to outspeed Jolly Bisharp because god that thing is scary as fuck.

Keldeo is a nice glue to the team, and fits well as a revenge killer and second scald spammer. Scarf is preferred here because on the ladder everyone just assumes its specs and free kills on scarf landos and such are always nice. Also because the team lacks priority so the more speedy mons the better. The first three moves are pretty standard STAB and icy wind is there mainly as a filler that will never be used, but actually comes in pretty handy not to get hard walled by the lati or if you feel like stunting on dem fools. Also the speed drop is nice as a dying gift to allow Gengar to potentially revenge kill faster threats.

​
Silentó (Ferrothorn) @ Leftovers​
Ability: Iron Barbs​
EVs: 252 HP / 132 Def / 124 SpD​
Relaxed Nature​
IVs: 0 Spe​
- Leech Seed
- Spikes
- Power Whip
- Gyro Ball​
​
"So watch me Whip, watch me Gyro"​
​
Ferro is is the last hazard setter of the team, and main Lati@s switch in. Power Whip is here to increase its offensive presence and to be able to hit manaphy and keldeo. Gyro Ball hits very hard the faster mons that Ferro likes to switch into. Spikes rounds up the hazard setting core of this team, and Leech Seed is chosen over T-wave because it increases Ferros longevity by a lot as well as encouraging switches, which synergises very well with hazards. Very handy mon and its as annoying to face as that song is annoying to listen to.​
​
​
​
OVERALL:​
​
This is a very powerful team that takes pride in its ability to check most of the metagame threats and to force a number of switches in order to abuse the hazards to its maximum potential. It should be played offensively when it has the momentum, trying to get gengar and aerodactyl in as often as possible on predicted switch-ins or moves that don't affect them. However it definitely feels the lack of a solid pivot that can ease some predictions, as well as some priority to help out when set up mons get out of control.​
​
The team feels complete as it is but I am open to any suggestion, especially anything on filler moves or EV spreads, but even a change in mons if you feel it would help the overall result.​
​
I'll reserve the first comment for some replays I'll add in as soon as i find some decent ones, and a threat list should I get around to compiling one. For now keep in mind weavile who did absolutely blow me back recently and has to be played very offensively around.​
​
​
Peace out.​
​ 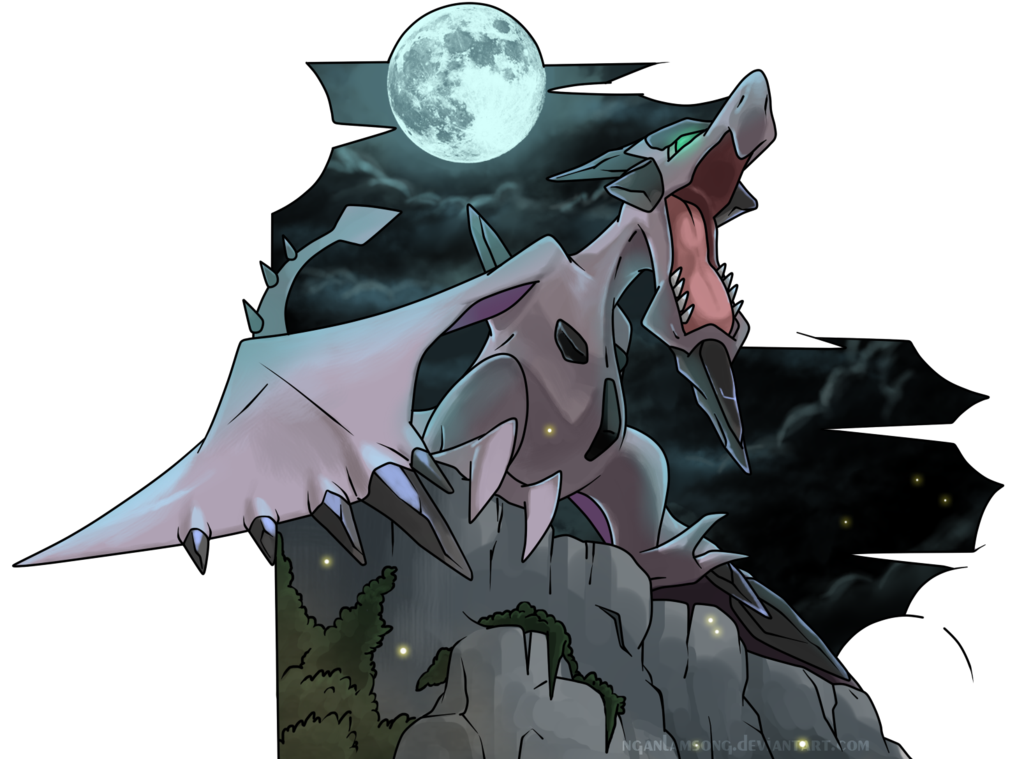 (Amazing art by nganlamsong btw definitely check him out)
http://nganlamsong.deviantart.com/

I actually built a mega aero team too but mine when something more:
serperior aero keldeo clefable latias and rotom wash

Now less about my team and more about yours:

The first thing I would suggest is Ice Fang < Aqua Tail

While yea it may be better vs Landorus-T, there are plenty of other situations where say you are versing a Excadrill, a Ttar, a Weakened hippo, etc

Its a better option overall and plus you never know if they are scarfed and bop you with a stone edge, or if they are defensive and rack up damage with rocky helmet.

I also sam CM Twave Clefable > Gengar so that you can afford to run Specs Keldeo and since their mons are gonna be slower.

Starmie is a great spinner in OU and its ability to have self recovery, a powerful scald, and a good typing and access to Reflect type make me lean more to Reflect type starmie > Cruel

I personally think Scarf Magnezone < ferrothorn is appropriate since you can trap steel types and revenge kill water types for Aero, which is always nice.

Gl with the team

Hi, TheDoff Good team around Aerodactyl mega. Okay replays to see what the team in action. Apparently nothing wrong. In one Ferrothorn does a good job. Maybe it does not seem to appreciate or easily, but the team is somewhat weak to Slowbro mega. But you can rest assured, it is controllable with several components. Gengar is the fastest way out. Moreover accounts Taunt + SBall to end. The problem comes when Gengar is out, you can give that situation. You go behind the Haze of Tentacruel or support of Leech Seed + Power Whip Ferrothorn. Good idea put Keldeo, I think you've done with the thought of Bisharp or mega Sableye. Okay, having said that I would like to give you any help / solutions. I try to approach it the most beautiful and best you can. Step by Step.

· Rotom-W > Keldeo -> The reason is obvious. More fan to Slowbro / Slowbro mega successful. Tornadus-T with its powerful Hurricane may also be problematic for the team. Rotom-W keeps him away thanks to its electric type. It is best not mega pokemon tier and high use is not surprising.
· Clefable > Gengar -> Curiously it removes Gengar, but Conkeldurr is another danger although not as frequent. Clefable not only stops if you do not have Poison Jab, of course. Faces covered by Keldeo mega Sableye. Absorb that again. The same applies to Thundurus, you forget with this option. It is another not so much but it has its dangers if present.

· Tornadus-T > Tentacruel -> As pressure to remove Stealth Rocks and all kinds of movement that damages the output of each pokemon, you can change this point is the most fragile, because you do not have Rapid Spin / Defog. But there is always solution impossible as it may seem. If I thought Tornadus-T is because it is a brutal pokemon, it will help against MVenusaur of first. It has a decent speed and special attack where he makes good use with his ability to last longer. I can also name Gengar but this time the dark side, haha. Strikethrough as a threat to this proposal.

· Defog Aerodactyl -> I know, it sounds weird mention this. I imagine that will not make you grace like this pokemon have if tests as the only method to release the Stealth Rocks, Spikes. You could substitute a movement for this, or make Aerodactyl a little more bulky. Obviously keeping Roost. It is risky, but with these changes and as being the mega Aerodactyl is untouchable, and I respect that. For that, you are free to try and perhaps convince you.