Moderator
This game has no hammer btw hal 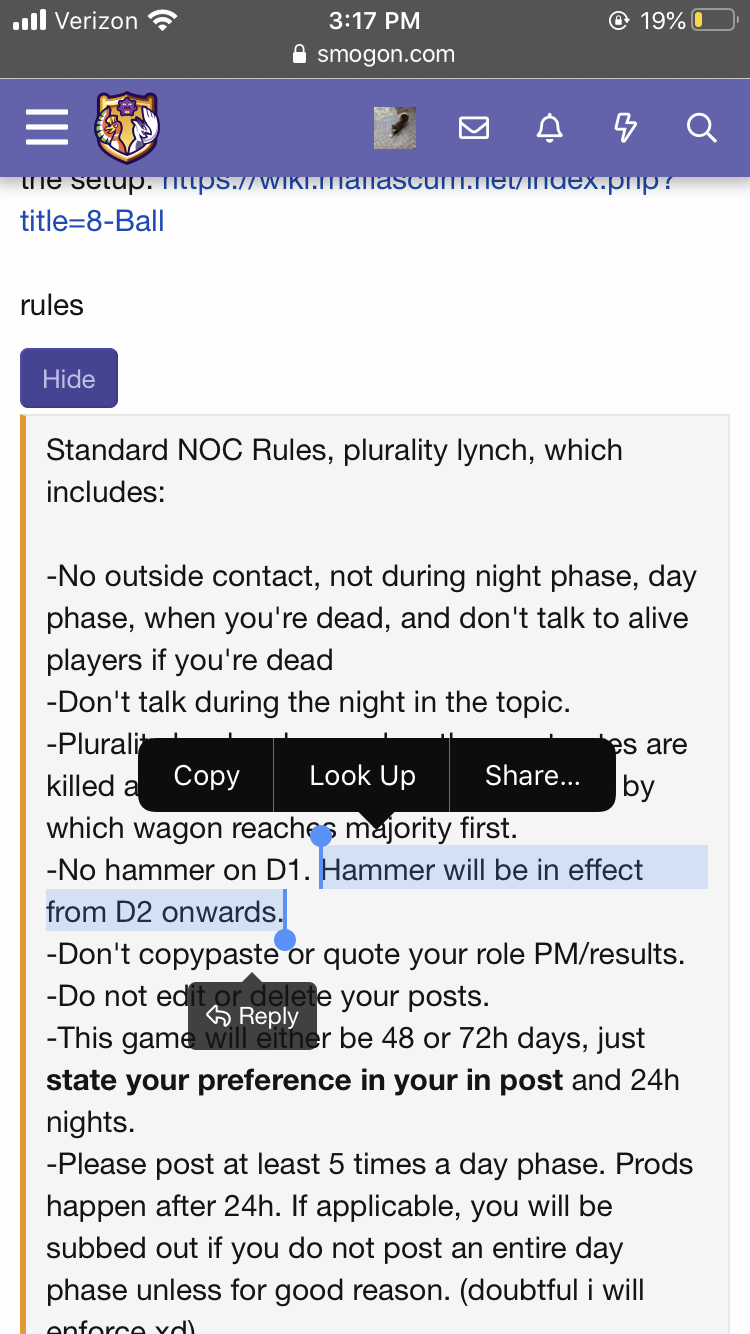 JALMONT said:
-No hammer on D1. Hammer will be in effect from D2 onwards.
Click to expand...

Gg though, was fun.

apricity said:
Gg though, was fun.
Click to expand...

... why is he talking like the game is over

so was I 8th ball EVERY DAY?

M24 said:
Rn the only person I'm sure is safe is bluegummybears
Click to expand...

This was very funny.

Moderator
I was gonna push hal after clarinet too f

Wait clarinet, why did you want to die so badly then

I mean no shit. It’s not clarinet and it’s not tommy. Which leaves only bluedoom and uturn and it’s obviously not bluedoom who’s been trying to get me lynched since start of day

apricity said:
I mean no shit. It’s not clarinet and it’s not tommy. Which leaves only bluedoom and uturn and it’s obviously not bluedoom who’s been trying to get me lynched since start of day
Click to expand...

All in all, this was a fun experience for a first game, i think i learned a few things about standard mafia.

Yeah that’s gg clarinet was voted out (dusk, uto, apricity, m24) and was town . He was also 8 ball so mafia kills someone and gains parity so they win. Grats uto and apricity brief Post-game tonight

Moderator
Uto was good gg wouldn't have got you

here's my postgame i guess:

we lynched knights because he's annoying and he's unpredictable. i always gravitate towards getting rid of unpredictable people when i'm scum, because i feel like when everyone is predictable (even if they have good reads) it's much easier to play. we 8balled bgb because we thought he might be an inactive lynch

day 2 we saved poke by dogpiling onto bgb. we 8 balled marth that day, it was poke's suggestion, i didn't actually want to nightkill at all. nightkilling is good for scum obviously in that we get to kill off a town, but it also has the setback of kind of informing town what the gamestate is through the choice of nightkill. Obviously you can wifom it but ultimately it's hard to make kills that don't benefit you for the sake of appearances. so i was honestly pretty happy not to have a nightkill. so we 8balled marth and didn't approach it at all. we also tried very hard to keep tommy and clarinet in the game assuming that they would crossvote. the way i viewed it was that there was a lot of tension between town. when specific people get lynched, the tension resolves, eitehr because people in the tvt die or because people kind of figure out what the gig is. so bgb was a good lynch for us in that it didn't resolve the tension within the town

day 3 i kind of reflex voted marth when i saw him coming after me, i assumed that we could get clarinet the entire day honestly and was really surprised when tommy backed off it. then i was at work and when i checked back in there were four pages and a post from tommy pinging me and uto (lol) to get onto clarinet. so we did. i'm not sure why m24 hammered? if he had stayed on me i would've been lynched via the tiebreak and i'm pretty sure we would've just lost because it's 1v4 and marth and m24 would've both looked really good (me/clar could've been a team i think). so not sure what happened there. also i'm honestly pretty convinced that most of the mechanical speculation in the thread was completely off: voting clarinet day 1 was better mechanically, as was voting clarinet day 3 (obviously didn't pay off but what can you do).

apricity said:
i'm not sure why m24 hammered?
Click to expand...

Literally did not know what a hammer was lmao