Just note that I am sorta afraid to post this team 'cause I know it has a lot of holes and Smogon just seems so elite I'm afraid of being laughed at. But, whether you laugh at me or not doesn't matter. I just need to know how to improve my game from these standard sets. Without further ado, here's my team:

Tailwind (Aerodactyl) (F) @ Focus Sash
Ability: Pressure
EVs: 6 HP/252 Atk/252 Spd
Jolly nature (+Spd, -SAtk)
- Taunt
- Stone Edge
- Stealth Rock
- Earthquake
--------------------------------------
She's quite effective at doing her job. Besides guaranteeing a SR setup and preventing my opponent from setting up for a few turns, she provides sweeping ability against Trick starts like Metagross, or frail starts like Azelf. If she manages to survive her start (unless she survives with < 50% health), I'll often switch her out and keep her for sweeping mid- to-late game, or use her as a check for Choiced Pokemon before getting a free swap to an appropriate counter. She also works wonders as a Bait Pokemon, which I find my team relaying on a lot.

Manchi (Infernape) (M) @ Life Orb
Ability: Blaze
EVs: 66 Atk/192 Spd/252 SAtk
Hasty nature (+Spd, -SDef)
- Close Combat
- Fire Blast
- Hidden Power [Ice]
- Grass Knot
--------------------------------------
The more I battle, the harder I'm finding it to actually use Manchi, so if any Pokemon has to swap it'll be him. Originally he played the role of a MixApe-Physically Biased, with U-Turn as a check. When I realized my team had a horrible hole in Special Attacking, I swapped to this set. It was fine for a while, especially with HP ice to surprise-attack Latias and Salamence that think that can sweep me, but now I'm back to finding little to no use with him. Correct me if I'm wrong, or if I'm missing opportunities to bring him in other than as a pseudo-revenge killer/wall breaker.

But now I've noticed my lack of physical defense. I tried swapping Blissey for Cresselia, but found that I detest its movepool and there are just so many people prepared to counter Cresselia that I am mortified - plus the recovery method sucks when up against any whether team. Perhaps I could swap Infernape for something like Gliscor, but then I'm back to not having a special sweeper. 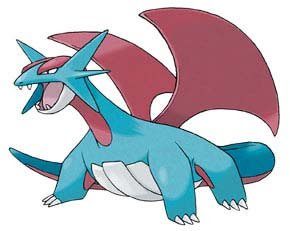 Riksaw (Salamence) (M) @ Leftovers
Ability: Intimidate
EVs: 192 HP/140 Def/176 Spd
Jolly nature (+Spd, -SAtk)
- Earthquake
- Roost
- Dragon Dance
- Dragon Claw
--------------------------------------
A rather unconventional set, but works amazingly well. Most people expect a physical sweeper after seeing my Infernape, or a MixMence if they haven't seen him yet. All-in-all, 90% of the time they expect a DD and go for an attack - which I do, unless I know they have an ice attack, in which case I swap to Scizor or Magnezone, or if it's from the likes of Swampert, Infernape/Magnezone (whichever is alive). For electric attacks, I roost, especially if I need to recover SR damage. The Roost catches a lot of people off guard, and suddenly they don't know what to do with my set. Most either keep attacking, allowing me to roost-DD up to a sweep, or swap to an Ice-attacking Pokemon, giving me a free DD. If it's something like Mamoswine or Weaville, or any Ice Shard Pokemon, I will not hesitate to swap out and lose my DD. I'd rather keep my Salamence alive and Bullet Punch with Scizor.

I am rather hesitant to remove Salamence from my team, especially this set, because it pairs so well with my Magnezone and sorta plays up on my physical weaknesses. Unless there is a perfect reason for removing him for a Pokemon that does his job better, or will better make up for my other Pokemon (which there probably is), I'd like to keep him. Ramrom (Magnezone) @ Leftovers
Ability: Magnet Pull
EVs: 6 HP/252 Spd/252 SAtk
Timid nature (+Spd, -Atk)
- Substitute
- Thunderbolt
- Hidden Power [Grass]
- Magnet Rise
--------------------------------------
This guy comes in handy in all sorts of ways. His main job is to deal with pesky steal types, but he also has a double ability against water-types and ground-types- especially Swampert. Magnet Rise makes its Earthquake null, and HP grass slices it in half. HP grass also serves as a great check for ground types, since most expect a Thunderbolt against their water-types, and I can instead get some major damage on their grounds. If the ground type is faster than me and I don't have Magnet Rise up, I'll swamp to Salamence and either get a free DD from their swap out, or if I'm facing a Gliscor or Hippowdon, I'll Roost to check for an Ice attack and then swap to Scizor. Another reason to run HP grass instead of fire: most Steel types are specially weak anyways, and Thunderbolt is a 3HKO at most, most likely a 2HKO. I can Sub+Thunderbolt+Thunderbolt, or in the case of Metagross, Thunderbolt+Sub+Thunderbolt.

Magnezone is another Pokemon I'm hesitant to remove because it works so well with Salamence and Blissey. Salamence lures out those he's made to kill, and Blissey absorbs the only Steel-Type I'm afraid to leave him out against: Heatran. Salamence is also great at checking Heatran for Choiced items, because if I predict an Earth Power correctly, I can get a free DD/Roost on their swap out.

So there it is. My team, which is good but needs improvement. Probably a lot of improvement. Known trouble spots for me are Machamps and Stall Teams with entry hazards, though if I can get Salamence set up on DDs I can usually break through stall teams. Forretress, while I can take it out with my Magnezone, is a problem because it blows away the SR Aerodactly sacrificed herself to set up and will get at least one entry hazard on my side. That said, I'd like to know of a good Rapid Spin Pokemon that could work well with my team.

If anyone laughs at you just tell me and I'll deal with them. >:( GRRRRR

A standard DD Salamence with one DD up can sweep through team. T_T
Give a Choice Scarf to Infernape since it has HP Ice a scarf would be the right choice.

K lets think that you scarfed Infernape but what's your best counter to a Gyarados with one DD?

Also Agiligross can rip through your team so using a Scarfed Latias if perfect. You can at least trick Metagross locking it into Meteor Mash or Ice Punch, then finish it off with Magnezone. ^_^

From what i see here you have a farly solid team If a littel weak to stall and very weak to fighing types as after a SD lucairo can 6-0 your team therefore a few simple changes would help this as you saidf yourself your looking for a new lead i would simply suggest, a Gliscor with a EV spread of 40HP/252Def/216Spe with a jolly nature with a move set of Taunt/StealthRocks/EarthQuake/Roost. In doing so you would have a good weapon against Stall in the use on taunt a Fighting resists with the ability to outspeed jolly lucairo and OHKO with earthquake.

If your not finding Mixape effective Try changeing it to a Bulky Gyrados With an ev spread of 156 HP / 72 Atk / 96 Def / 184 Spe with an Adamant naturewith a moveset of Waterfall/StoneEdge/Taunt/DragonDance. This will also help with your stall and your fighting weakness. Being able to come in on Skarmory/Blissy taunt them then DD on the switch and cause pain

And lastly as a small change i would make is to swap Magent rise on magnezone to explosion to catch special walls on the switch doing this can break stall teams as you can come in and trap/kill skarmory then explode on the special wall switch in But in doing this you would need to switch to a mild nature to now lower explosions power and put the sare 4 evs into att to boost it eve slightly.

Darkvirus said:
, a Gliscor with a EV spread of 40HP/252Def/216Spe with a jolly nature with a move set of Taunt/StealthRocks/EarthQuake/Roost. In doing so you would have a good weapon against Stall in the use on taunt a Fighting resists with the ability to outspeed jolly lucairo and OHKO with earthquake.
Click to expand...

I like this suggestion, but just a nit pick. Have the EV spread be: 252 HP/40 Def/216 Spe, it gives better overall defenses.

butterfingers158 said:
I like this suggestion, but just a nit pick. Have the EV spread be: 252 HP/40 Def/216 Spe, it gives better overall defenses.
Click to expand...