I took my foot off the gas pedal a bit this month and didn't watch at quite the insane pace I've going all year. A vacation and an entire week of HunterxHunter were key in slowing me down but I also had a bit of anime fatigue. After such strong start with Liz and the Blue Bird and more of Mamoru Hosoda's films, watching anything else almost felt like a drag. I did manage to smash out a bunch more of my Netflix exclusives list as well as a Violet Evergarden and side stories rewatch. In other news, HiDive was added to my streaming services so I look forward to watching a bunch of their exclusives as well as the uncensored versions of several ecchi shows and series.

I dove back into the Netflix exclusives and it was mostly average with a few bad shows but also some gems were found. The 2nd season or continuation of Baki delivered on promises made. It lacks finesse and a refined plot, but makes up for that in spades with herculean beefcakes meticulously beating the ever loving shit out of each other. The visceral aesthetics are sure to please the carnal urges everyone has sometimes.

Rilakkuma and Kaoru is very much the opposite of Baki. It's the epitome of slice of life comfort wrapped up in a gorgeous stopmotion animation presentation. Life got you down, feeling a bit worn out? Check into a couple of the nicely brief episodes to help restore your soul. A re-watch of Violet Evergarden and anohana is never a bad idea, but it was in Knights of Sidonia that I found the unexpected; a half-way decent anime series in quality CG. The plot was actually a boon, and the character development was questionable at times but all in all it was a good show. Sure there are some slow parts, but space opera's always have those. If you can look past the CGI stigma, KoS is a well written, well produced series set in a post apocalyptic colony ship in space, give it a shot.

HunterxHunter, what hasn't already been said about this absolutely fantastic adventure series? It has strong characters (and antagonists!), a rock solid power system, heaps of character development, a well thought out plot and both comedy and intrigue to keep everything greased. Man am I glad I was able to devote an entire week while off work to give the thing a proper binge watch. Greed Island was my favorite arc, with Chimera Ant getting the unanimous second slot and the final arc featuring Gon, Killua and his sibling plus Ging on the last episode. What an incredibly well thought out, well put together way to complete the very first step on what could be an amazing story; sadly the mangaka has health issues and the manga has not progressed much in the last decade. If you haven't watched HxH you owe it to yourself to find the time and watch this masterpiece.

And then I watched a bunch of good-to-mediocre shows that couldn't compare for the next three weeks. I feel like my slow come down from watching HunterxHunter had a hand in curbing my ravenous consumption of anime along with running across some inconceivably bad movies. Psychic Wars and Black Cat were both laughably bad, despite black cat's best efforts to spend a massive budget on pricey VAs. Watch them with a friend and enjoy tearing either one to pieces.

Blood Blockade Battlefront + and Beyond was a ride. Same author as that of Baccano I believe and the show had a similar vibe.
Last edited: Oct 2, 2020

Deca-dence: Really cool twist, super excited to see where this goes. I cant say anymore with spoiling so go watch. Humans living in a giant mech in a post apocalypse will always be a good genre.

Monster girl doctor: Sometime around 5 years ago a neuron misfired in my brain and ever since then Ive been desperately searching for monster girl material to consume for the plot. Centaur ecchi sucks ass but the romance between the main character and the lamia doctor is really cute, and I like monster girl world building. Recommend if you are a Rugi-tard

Olympia kyklos: Funny short with a greek statue spending time in modern day Tokyo during the 2020 olympics which will totally happen. Lots of good jokes for the history nerds and surprisingly well thought out punch lines for whats essentially an expensive Greek-Themed shit post.

Rental girlfriend: Cute romance but the cringe comedy is so cringy I can only watch it slightly drunk. If you liked domestic kanojo and for some reason want a more SFW version of that vain of cringe romance this is for you.

Uzaki: it's a meme in Japan for a reason. Very funny massive tit girl attempts to bully her senior at uni. Its like Takagi and Nagatoro except much more entertaining because Uzaki is a pathetic idiot who is fun to watch fail and the main characters have an iota of chemistry that doesnt seem to be the writer putting in their personal wishes to be stepped on by a 12 year old.

Rent-a-gf: Pure trash, the sort of thing that you only watch because that's what you want. All of the characters are dumb and/or obnoxious in very unlikable ways.

Deca-Dence: Actually pretty neat. Original concept, fun to watch, likable characters. It hasn't knocked it out of the park but it's solid. The mascot animal thing that looks like a pug except uglier is seriously ugly though.

God of High School: okay-ish tournament shonen with no real distinguishing characteristics except the fact that everyone's nose is red for some reason. I feel like this and Tower of God (which was an okay-ish HxH knockoff) are getting overhyped for being the first big manhwa adaptions.

Hamefura: Pretty fun comedy, with the one issue that it kind of runs low on ideas in the middle and basically relies on the characters to carry things.

Tower of God: Okay Hunter x Hunter wannabe. It has a couple major problems in that it likes to setup overly complicated challenges and then do a poor job of explaining the rules, and the fact that the main character is an utter bore but the show insists that everyone likes him and wants to be his friend. Sounds like it might get better later but who knows when that'll be reflected in the anime.

Princess Connect: Really entertaining, the main characters are all likable idiots that play off each other effectively and it does the sensible gacha game adaption thing and restricts the number of new characters each episode to only a few. The more serious episodes are pretty weak though.

Appare-Ranman: For a show about wacky racers this puts way too much time into the backstory and not enough into the wacky or racing.

i have been powering through haikyuu lately, watched 40 episodes in like 4 days

Lazy_bread27 said:
What anime’s are you all annoying you’re friends to watch? You can send that at me bc I am looking for some.
Click to expand...

I'll never stop recommending Steins;Gate and its 'sequel', Steins;Gate 0. Its reputation speaks for itself, but it's still hard to get people to watch due to the confusing/slow start. I think it's best watched without a lot of expectations, so all I can say is that it's a wild, emotional ride. Highly recommended to literally any fan of anime, and pretty much anyone else.

Rewatched ID: Invaded this week. It's still pretty great; the aesthetic really grew on me, and I really appreciate any show that allows the writer a chance to stretch their creative muscle. I've been trying to keep up with the sequel manga, but since there are only broken english fansubs, its not exactly easy

My entire quarantine was spent watching / reading Bleach, One Piece, BNA: Brand New Animal and Kaguya-Sama and also writing for my fanfics

This sounds like a very productively spent quarantine in my opinion. Did you enjoy Kaguya-Sama?

CloudyWithAChance said:
This sounds like a very productively spent quarantine in my opinion. Did you enjoy Kaguya-Sama?
Click to expand...

Oh hell yeah, Kaguya Sama is just a bunch of dumb kids doing stuff and falling in love and all that stuff

I almost picked up Sword Art Online but then I said "No. No. Not today."

the new digimon is fucking sick

Uh, I'll get my monthly watch list up soon, been a little busy and watching less anime this month

However, I will say, mixing up King's Avatar with King's Game was a wonderful experience. Binging the first 72 episodes of Black Clover was a lot of fun once Asta calmed tf down with all the screaming bits. Now I have 2 shows with ? episode count, One Piece being the other.

As for anime I recommend to other people all the time, REDLINE, REDLINE, REDLINE, always Redline!
Besides that, and actually a show as opposed to a movie, I suggest either Mob Psycho 100 or A Place Further than the Universe depending on the person's personality

took a break from haikyuu binging, needed a change of pace

a place further than the universe is absolutely delightful, it's so much funnier than i was expecting and it's got a ton of heart 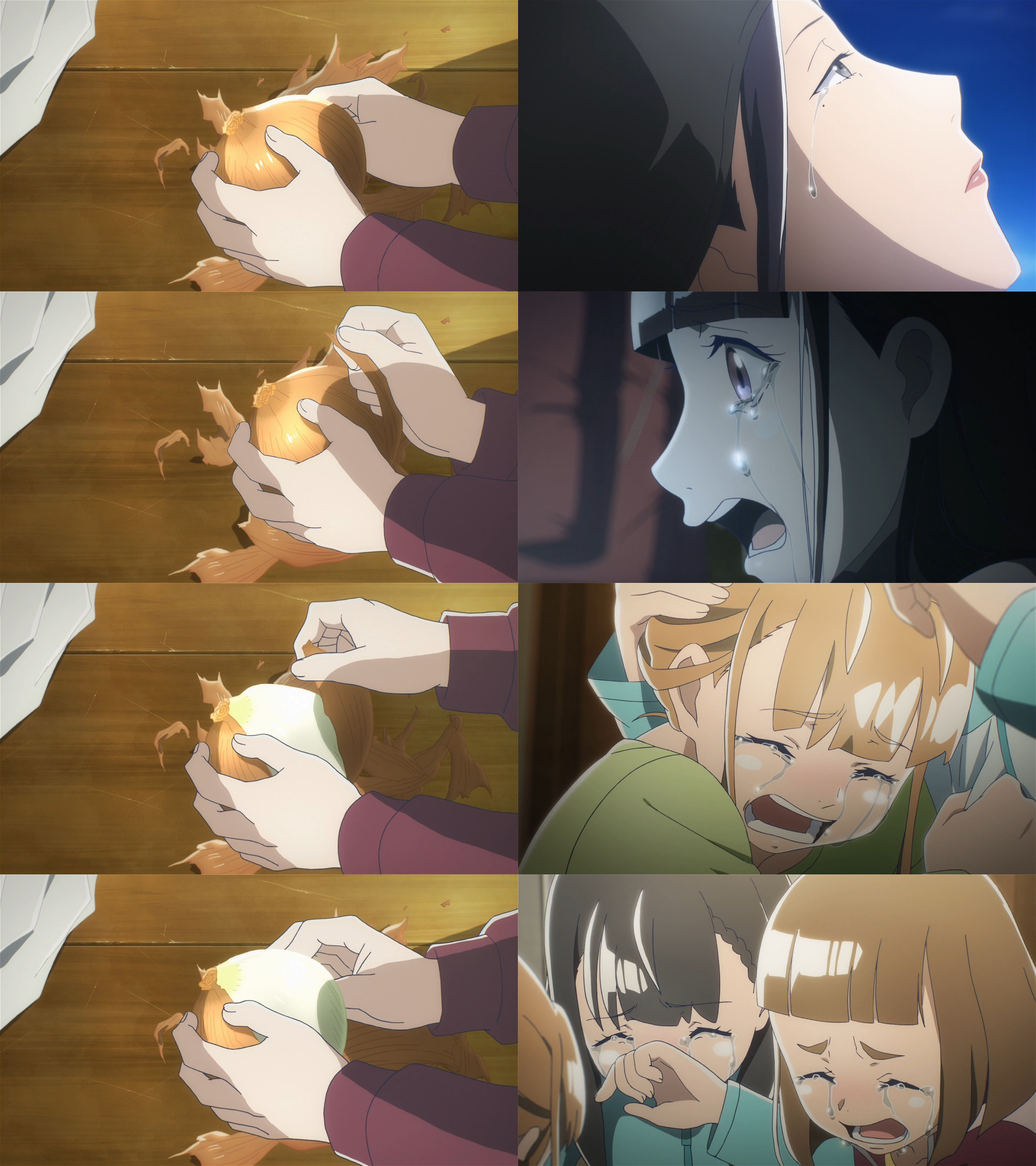 I watched bna. Amazing visuals do not do enuf to shore up the weird pacing, bad character writing and garbage ending. Just watch some clips for the animation

Also theres only one song in the bna universe. Luckily its good but damn does it stretch the suspension of disbelief

I also watched eva rebuild, the newest one idr which. wtfboom the movie 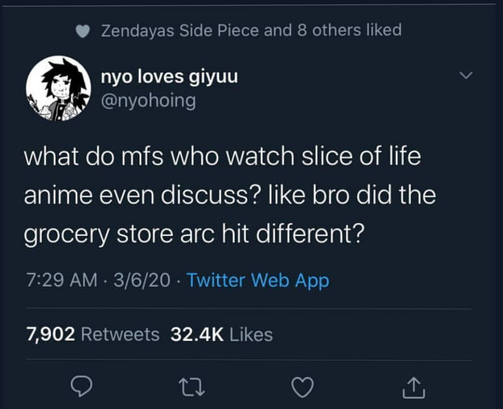 Holy smokes was BNA a fun watch. Too many clunky spots and weird action crunches really held it back but I still love Trigger; glad the Franxx fiasco hasn't weighed the studio down. Next up should be Kaguya s. 1 rewatch and then the new cour at last

As much as I was not sure about watching Digimon Adventure 2020 at first, I will admit that it feels a lot better to watch than I expected, and "BE THE WINNERS" and "X-Treme Fight" are kickass insert songs by Tanimoto Takayoshi, who sung "One Vision" from Tamers. They won't release until about the 18th of this month in Pacific time, though.

Also i hope whatever English dub exists does not try to turn it into a kids' show.

Jebus McAzn said:
a place further than the universe is absolutely delightful, it's so much funnier than i was expecting and it's got a ton of heart
Click to expand...

Well as previously mentioned I watched a lot less anime this month. Between 4th of July and the mild reprieve from Covid-19 (it's back) there just wasn't as much time for binging anime as I would have liked and I don't have the excuse of completing an excessively long show like HxH like I did last month. I did watch the first 6 arcs of Black Clover so those 72 episodes surely count for something. Anyway just mixing up genres and eras to keep things fresh as well as keep up with the anime podcasts I currently listen to. I hate spoiling a potential show so I usually try and watch stuff before it gets discussed on one of the six anime pods. So this means Shirobako will be on my viewing plate either end of August of else September for sure. I'd also like to knock Shensekai no Yori off my list sooner than later.

It's a fiasco now?

how does everyone feel about black clover, i personally think its the best ongoing new gen anime but i'm open to an opinion change
You must log in or register to reply here.
Share:
Reddit Pinterest Tumblr WhatsApp Email Link