Okay ive got to put a few sprites here otherwise everyone will have to scroll down to see the team and then youll leave so... yah here is my team.

I intend to use this team both on Wifi and Shoddy battle. I've made a number of teams but i think this one is by far the best i've used so far, thats why im posting it... Funnily enough I didn't originally make it so that it would be good, I made it mostly out of pokemon I like and then somehow I figured out all of them covered each others weaknesses and all gave something to the team, sort of. Oh yeah I don't know if anyone noticed that I don't have a Scizor.

Basic pros and cons of typing and stuff.

Pros:
Only 1 weakness to Stealth Rock
3 immunties to ground - Gyarados, Gengar and Flygon
A few more immunities (fighting, poison blah blah blah).
Scizor + Lucario counter, ive never been swept by a Lucario, am i alone?
One of these pokes can own Blissey and it's not shaped like a star.
For every one weakness I have at least one resistance or immunity.

Cons:
would i really say bad stuff about my own team??? Thats your job! Swampert is a great mixed lead, in my opinion anyway. It's main job is to get Stealth Rock up either early or at least mid game which it does phenomenally well...although I could be half asleep and keep him in on a Grass Knot. After it has set up Stealth Rock it can proceed to Roar in the case of the opponent setting up or because I can't harm the opponent in any serious way, or it could either use Ice Beam or Earthquake to take out as many dragons and stuff as it can before dying. The Relaxed nature is to promote it's defence which it needs as a bulky lead. I've just gotta say Torrent is completely useless but never mind. With most of my team benefiting from the Stealth Rock damage possibly built up from the Roaring it is a great asset to my team which can only be replaced with something that does the same job much better...oh wait there is no pokemon that can do that. Swampert is a unique lead that does exactly what it needs to to support my team. If im wrong which I probably am punch me, softly.

Now for a bulky physical. Gyarados is my Dragon Dancing sweeper that loves to switch in on Scizor and set up. Gyarados is primarily my Dragon Dance sweeper but also works well as a Scizor and Heatran counter which are just a few of the countless more. This is one of the only pokemon in my collection who approaches the battle with a more defensive strategy as the power and speed can come with the Dragon Dances. After this thing has had one or two dances it becomes a monster stopping at nothing, not even Starmie or Jolteon (Gyarados's arch enemies) if Gyarados is fast enough. I chose Ice Fang over Stone Edge as I really hate moves with low accuracy, I really can't stand them, plus Ice Fang hits dragons and stuff much harder where Stone Edge could not. Taunt helps with Skarmory and Blissey as the Taunt will really mess up Spikes and Thunder Waves rendering walls useless muahahaha. This beast also works well with my other pokemon especially Lucario and Jirachi as he resists all their weaknesses and in return whatever Gyarados can't beat, Jirachi or Lucario can easily. With the almighty ability Intimidate it can make all physical sweepers much less scary for a short while which enourmously helps my frail pokemon to sweep.

Now for the special scary sweeper.

Gengar is my awesome special sweeper paired with awesome coverage. With these three offensive moves Gengar can hit every OU for at least neutral damage which is very important to Gengar because of its low defences. One of Gengars jobs which is not entirely what I chose him for was I can lure out Scizors ready to kill Gengar with BP, then I can switch to Gyarados and set up. As well as this Gengar can also block Explosions and Rapid Spins which are really annoying. With high base spa and spe paired with a Timid nature this makes one of the fastest most dangerous threats in OU and with Hypnosis and excellent coverage too this is not a pokemon to be messed with. With Hypnosis Gengar becomes Uber, although it doesn't hit all the time it helps none the less, I love putting Brelooms to sleep. This guy also helps with the two ground weaknesses that I have and the one fighting weakness. This thing can switch in on all sorts of attacks and get an attack in on a slower pokemon for a OHKO. A major help to my team.

Woopdeedoo another physical but now it's a scarfer.

Flygon is my awesome revenge killer obviously holding a Choice Scarf. Thanks to Levitate and its good resistances to fire and ground this killer earned a place on my team. Garchomps little brother is almost as good as Garchomp himself, in a different way. With Outrage and Earthquake theres almost nothing that wont be affected by these amazingly powerful STABed attacks. With Fire Punch he can hit Scizor for super effective damage and kill many more like forretress. U-Turn permits Flygon to come in and out against Azelfs and Starmies which will really wear the enemy down. The Adamant nature makes up for the not so great attack stat but coupled with the speed of the Choice Scarf this pokemon can race anything to a good OHKO. With its attacks and excellent STAB moves (Outrage and Earthquake) which go over 150 power each this is definitely not a pokemon to underestimate, it might just be the last thing you ever do.

And now for the 3 eyed steel type (seriously it does have three eyes). 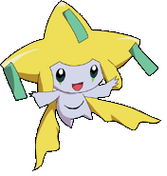 The Calm Mind variant of Jirachi. With Flash Cannon and Thunderbolt this set provides excellent coverage and amazing defences creating an almost flawless pokemon. Jirachi has 100 in all his base stats making him one of the most flexible pokemon imaginable. With Thunderbolt Jirachi can take out major threats like Gyarados and maybe Scizor in two hits as Scizor will not be able to harm it much with Bullet Punch. Jirachi also has excellent typing which provides some key immunities and resistances and along with all the other pokemon this one fits in nicely. With Substitute and Calm Mind this set can really annoy Blissey muahahaha and I really hate Blissey so that's good. The only other thing I can say about Jirachi is that it's so cute and the rest is pretty self explanatory and no one can say this set is not good if they have faced it before.

Now to my favourite ever pokemon and the star of the show. The Chosen One

Lucario is my late game sweeper and most prized possession on the team. When Lucario sets up with a +2 attack boost pretty much nothing stands in its way as all ghosts are koed by Shadow Claw, faster frail pokemon should be owned by ExtremeSpeed and anything thats slower than Lucario and not resistant to fighting is no doubt OHKOd by Close Combat even SkarmBliss is afraid of a Swords Danced Lucario as it rips through teams like tin foil. ExtremeSpeed is used for frail pokemon like Infernape killing them in one go thanks to Swords Dance, Close Combat does exactly the same but for slower pokemon and Close Combat has one hundred more power and thats only if it's hitting neutrally. Without the ghostly Shadow Claw this set would be walled by ghosts and with the high critical hit rate, now they don't stand a chance. No doubt the best late game sweeper in OU and pretty much all the other tiers. This pokemon with this set can potentially sweep a whole team so watch out! Oh and in case you are wondering which I guarantee you are, I'm using Shadow Claw because I've already bred a perfect Lucario and I can't be asked to do it again with Crunch, and the critical hit rate really helps too.

Ok well i started off with my two favourite pokemon and decided which would be the best movesets for them. What I decided is written up there.
I noticed i had quite a weakness to ground and fire! Aaaaaah! Ok so I need something to counter fire and ground. Also a Scizor counter would be good as 1 hit from SuperPower and Lucario dies. It could either be Zapdos or Gyarados but Zapdos didnt have resistance to fire so Gyarados it was.

At this stage i had pretty much no weaknesses but i still had two spots to fill in. I was looking through OU tier looking for stuff. I wanted a fastish pokemon but I also noticed i was missing a special attacker. The fastish bit ruled Heatran out as i din't want another choice scarfer that was weak to ground and fighting. I came out with either Latias or Gengar and I chose Gengar for its higher defences haha, for its higher special attack and better coverage and also it fit in well to the team providing a fighting immunity and another ground immunity.

Lastly I needed a lead that could for sure set up Stealth Rock, and maybe a bit bulky too as most of my team is quite frail. There was Hippowdon, Swampert, Metagross and Bronzong. I tried Metagross for a while but i couldn't stand the huge fire weakness I had. That pretty much left me Swampert and Hippowdon. Hippowdon had a higher defence but Swampert had better typing and a balance between both defences so I went with Swampert as I liked him more and he semmed better to me.

Also people im looking for good nicknames so if you can come up with any thanks very much.
​

Gyarados after a dd is a huge threat to the team. After a dd it can 2hko most of your pokemon. Switching fire punch to t-punch or stone edge can help you revenge kill it. Next i don't really like hypnosis on gengar. Since it has 60% accuracy now it just misses to often to be useful. Switching it to hp fire or sub would be a better option and can help against scizor from trapping you. Other then that, the team seems good.

Here I stand in the light of day

Max speed on Flygon is necessary to at least tie with +1 DDers. Jolly to outspeed them if you feel you're losing to them a lot.

Hypnosis is generally a bad move in DPP, so you might want to switch it for Explosion as a last ditch attempt.

Lucario won't last long enough for Shadow Claw's crit rate, so just go for the standard Crunch. Also, you won't be killing Gliscor anyway without Ice Punch, so there's no need to go for Jolly. Go for Adamant instead.