LADDER TOURNAMENT III
​
Welcome to the third iteration of the Battle Stadium Singles Ladder Tournament! In this tournament, players will take their skills on the BSS ladder on Pokemon Showdown, and aim for the top. The first part of this tournament features 4 cycles, each a week long, where the top 4players on the PS ladder will be qualified to play in the playoffs. The playoffs will be a best of 3, single elimination tournament, with a best of 5 starting at top 4. Your performance in this tournament will earn you CP to qualify for the Battle Spot Singles Invitational and a chance to win the BSS Circuit Ribbon (

To participate in this cycle, follow these 3 simple steps:
Qualifying stage

Every week, for the 4 cycles, players will climb the [Gen 8] Battle Stadium Singles ladder on Pokemon Showdown, aiming for the top of the ladder. The 4 highest players in each cycle will qualify and will go to the playoffs. The playoff seeding will take the winners of each cycle in the top 4 seeds, and the remaining players in the other 12 seeds, ordered by the elo that the players have when the cycle finishes. Players can qualify in multiple cycles to improve their seeding, if they choose to do so. In the event that a already-qualified player qualifies in a later cycle with a better seeding rating, then their earlier cycle slot will go to the next available player within the earlier cycle. All qualified players will earn 4 CP in the BSS Circuit.

The 16 qualified players will be entering a best-of-three single elimination tournament bracket. Starting in the top 4, the games will be a best-of-five. Players earn 2 CP per win in the playoff bracket, with a bonus 1CP for winning in finals.

To clarify, the entire tournament will be playing with the Isle of Armor metagame. 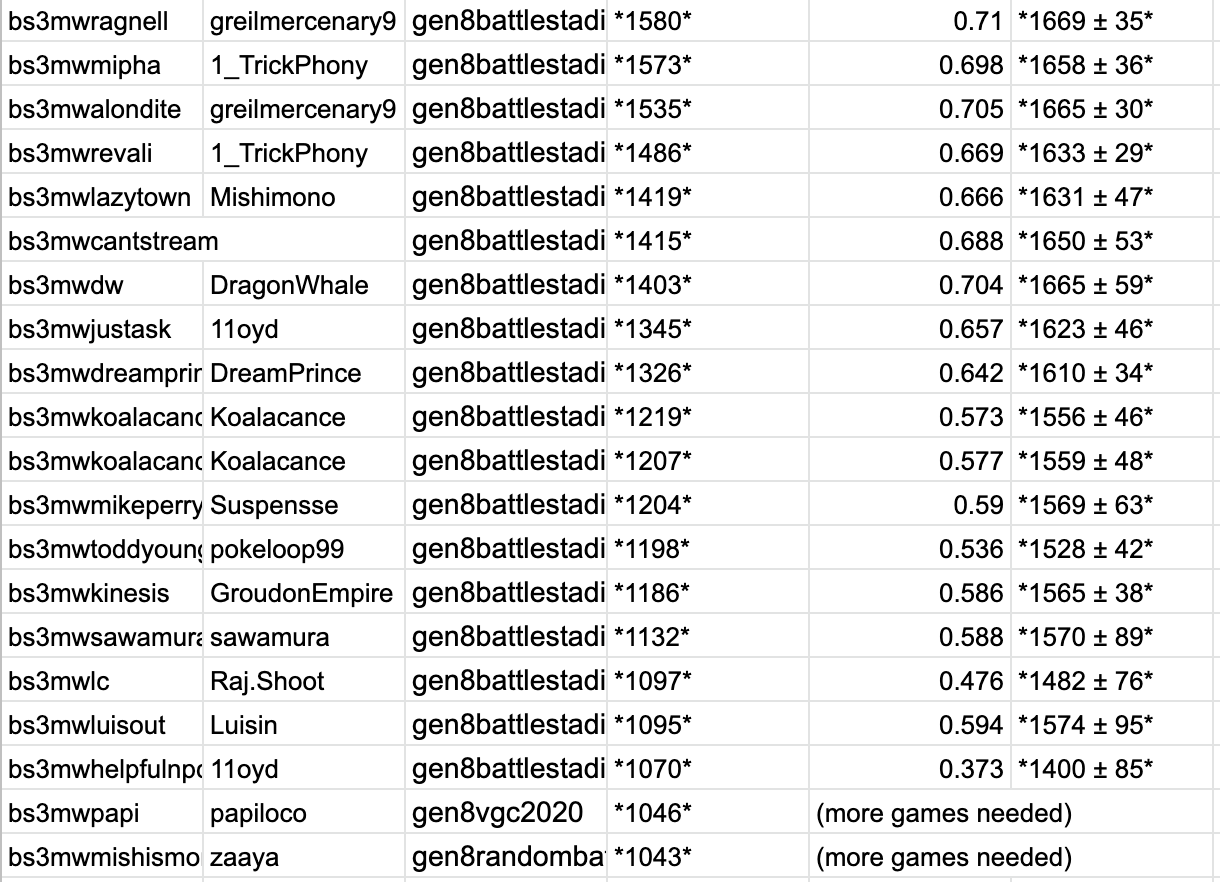 Congrats to the qualifiers!

2nd cycle begins now. The new tag for the 2nd cycle will be BS3FE
An additional rule will be applied starting in this cycle. In order to promote fair competition, players are required to post in this thread before Friday of the week cycle, to prevent obfuscating the leaderboard at the end of the cycle. Any signups past Friday will not be counted for the cycle.