Balanced Hackmons Suspect #1: CFZ's
​
What?
I am beginning a suspect on Z-Moves that can be run in movesets without requiring the use of their corresponding Z-Crystals (or as I cleverly dubbed them, "CFZ's"). The two options will be Ban and Do Not Ban.

Why?
As seen from the discussion in the BH Suspect Thread (beginning here), there are several reasons which are quickly summarized below:

How?
There is a simple COIL Requirement of 2800. Get that and you can vote!

Where?
You must post your proof of reqs in this thread and play your games on the main pokemonshowdown.com sim. A new Balanced Hackmons (suspect) ladder shall be created for this suspect.

When?
On account for New Year's keeping people busy, deadline for proof is Jan 12. The voting will likely begin immediately after and I'll try to get it completed by Jan 15. The reqs (and imo the outcome) should be fairly straightforward for this so gonna try to keep this snappy.

Are CFZ supposed to be banned on the suspect ladder? Because I lost to a guy that used them on the ladder.
http://replay.pokemonshowdown.com/gen7balancedhackmonssuspecttest-507454037

Coil doesn't seem to be working on the ladder. Sorry for the bad image I'm not good at screenshots.

Ill edit this later w/ my thoughts on z-moves but i wont now cos Im tired af but for the record I'll be voting Ban on CFZ.

Wanna take a guess at what my stance on CFZ moves are?
spoilers: i want them gone
In all seriousness, the fact that I was able to have a decent W/L ratio (I only lost to people who dedicated their teams to beating it or just due to poor investment on my part) by just scumming z moves should probably be a sign that they should go. I even slapped a random CFZ on my Phero for coverage and it actually did some work by bopping typical counters to most Deo spam so it's not just Deo Spam that's causing issues
The first quarter of this was me getting wins with Volt Absorb AV yvel because I didn't want to have to deal with that nonsense myself at the start

If you want to be the embodiment of cancer, steal my team and claim it as your own. Fair warning though I trademarked everything so you're gonna get a lawsuit if you do steal it unless you keep everything exactly the same besides sets i'll let you change that

NOTES FOR YOUR CONVENIENCE:
Attack investment on Phero is to attempt to beat Berry Innards Out Chansey by reducing the last hit's damage such that it won't OHKO with Innards Out. Whether this actually works or not, I'm not sure, all I know is that max doesn't (it's still accomplishing its purpose anyway)
Twinneedle can be run over Pin Missile if you want that juicy poison chance but imo it isn't really worth it
Magic Guard is immune to Innards Out, so if you suspect something throw the Magic Guard out.
Investment on Harvest set lets it OHKO Solgaleo that invest at most 72 Def 100% of the time, anything less than 168 Def will result in at least a roll in your favor. This also lets it OHKO all but the bulkiest of Yveltals 100% of the time thanks to me running Catastropika instead of 10MV Thunderbolt, Max HP/Def is a 75% chance. This spread probably isn't optimal though as Genesis Supernova now misses out on certain KOs.
I'm missing hazards because I'm too afraid of Magic Bouncers. A mold breaker'd solve this, yes, but what would you really replace?
I ran Frost Breath on some things to get around Unaware Zygod at least somewhat, but you can run Icicle Crash/Bolt Strike over that on the Smash set if you feel that other things (AV, SDef Gyarados Mega) are causing you grief.
Filler Z Move on the MG set can be swapped for whatever you want, I just ran Oceanic even though I should've probably run Catastropika instead
I'm not running Innards Out Chans because your opponent can easily just run like 5 phero like that one guy did and ruin you
I used to run Icium Z + Ice Burn/Beam on the Dazzling set instead of a smash set but I decided that was stupid and got rid of it
I saved replays of pretty much every match I fought but I don't really find most of them that good so rip

Squawkerz said:
Are CFZ supposed to be banned on the suspect ladder? Because I lost to a guy that used them on the ladder.
http://replay.pokemonshowdown.com/gen7balancedhackmonssuspecttest-507454037
Click to expand...

By allowing them, it gives people a possible last chance to ladder with cfz spam which also lets new people going for the suspect form an opinion on their impact, be it positive or negative.

Used some stupid CFZs on the ladder, took only about 30ish games to reach the COIL showing everyone how aids it could be if it stays.
(oh well those 3 loses though, really shitty play by me lol)
The idea of "either banning them all or no ban at all" actually makes me feel a bit sad since I wanted to restrict it to one per team.
But given there is no other option, there is no reason to postpone my vote.

Edit:
after going over all replays I saved locally, there seems to be only two notable replays worth a look:

SSSSS on MMY lures in and kills AV Solgaleo: This is basically saying the most dedicated wall shall also fail due to Z moves being insane. While in the battle M Gyarados Volt Absorb(which also surprise-killed many Electric Z move spamming Deo-As with beat up) lures opponent Chansey to stay in and get trap-killed, and this M Gyarados also serves as the imposter proof for a Z-move spamming MMY.

rub a dub dub one scrub in a tub

Ban CFZ's because they enable sweepers to take out things that should be able to check them and make counterplay to a lot of mons insanely difficult, especially if they run a CFZ you don't expect. Teams built around spamming these are far too effective, as seen from the fact that Pikachuun's team is currently all over the ladder (gdi chuun). The presence of defensive Mega Gyarados on many teams, often with volt absorb, because it walls the psychic spam (and moongeist and sunsteel) andcan wall the other z moves is a symptom of a meta that cant really deal with the power level. I've heard it said that because they onoly have 1pp z moves aren't that bad because of the risk of hitting the wrong mon with them, but I say you only need that one hit to break a wall for your sweep.

I used a couple teams including the sample I posted in the bazaar but this is the one I finished with. It's okay, not great. Needs some work. Shout out to The Ruby Kitty whoever you are for wrecking me harder than I think I've ever been wrecked. TrickScarf Mewtwo Y seriously caught me off guard.

EDIT: Okay apparently first pic isn't good enough so here
http://imgur.com/iUIdW5g this one has the proof its me and all (E4 Flint still sucks)
Last edited: Jan 4, 2017 I came on PS yesterday, saw the announcement in the news box and hit up this thread. I used Deoxys-A spam courtesy of Pikachuun since I've never played Balanced Hackmons before and it was easy as hell to get reqs I'm not going to lie. I'm glad I saw that announcement because otherwise I wouldn't even have attempted to get reqs, although it was annoying having to make a Smogon account to vote.

After all that being said, I am going to vote Ban, as after using them myself I realised how little skill they need and how easy to use they are, taking all the thought and skill out of laddering and playing Balanced Hackmons in general.
Last edited: Dec 31, 2016 Had a nice run.

I normally use Google Chrome, but I had a bunch of private bookmarks that I didn't want to bother taking down.

I'll be posting my thoughts regarding the suspect in the other thread soon.
Last edited: Dec 31, 2016

i had decent success without using any z-moves (shocker!), but while there are countermeasures against z-move spam, it is entirely too unpredictable and over-centralizing as you have to literally play perfectly(predict every z-move) to avoid losing the game or risk running a team that has a bad matchup against anything other than Deoxys-Attack spam. Voting to ban cfz. If anyone is interested in the team I used I can edit this later but if no one wants it there's no reason to put it there.

I know. My records are a steaming pile. I don't care. I am with a ton of people when I say we Ban CFZs.
They are just too powerful for even BH to be using more than once a game. They can be placed literally anywhere to devastate a wall or tank.
As for Deoxys spam... CFZs are powerful there, too. Even if they are a bit more predictable because of it. But it's 6 Deoxys. They can just as easily pull a Sashed Refrigerate or a Contary one, and annihilate that wall you sent in.

Oh, and yes. BAN WATER BUBBLE. ...Well, when we have another suspect. But still! Doubling the power of any type of move is going to be broken. ...even if it does have an absorbing ability. That's centralizing enough, however.

Some replays:
http://replay.pokemonshowdown.com/gen7balancedhackmonssuspecttest-508859523
Actually one of the best matches I have ever done in BH. That ending is beautiful.

BAN CFZ Even though I'd rather ban imposter Chansey/blissey being banned but it's still OP. http://m.imgur.com/996UEt2 Bad w/l cause my team auto-loses to deo-a spam, rip.
Vote: BAN (Mostly because I don't like playing 50/50's all the time) 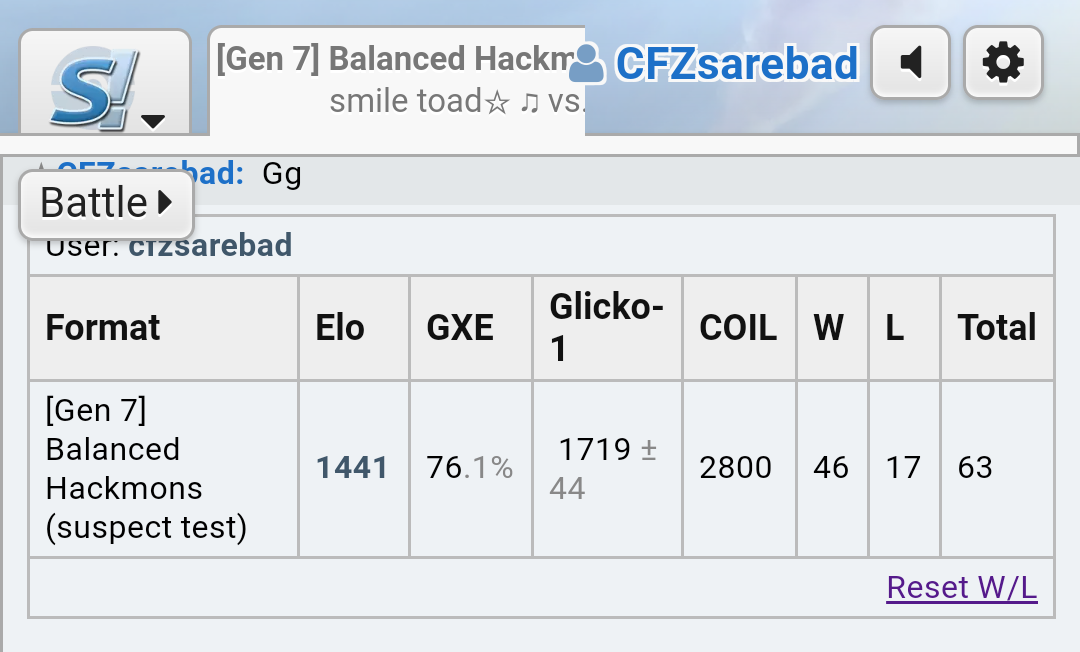 proof, also proof I don't know how to use spoiler tags

E: Just realised I actually had 2799.8 coil and it rounded it up :/
Did another battle so here's actual proof:

DG9 is actually the best balanced hackmons player i have ever seen. That guy is a sure pickup in the next SPL.

shoutouts Adrian the God and pdt for teams, ban cfz and all zmoves in general and water bubble and triage and dazzling and queenly majesty and psychic surge and comatose (man really fuck comatose stupid broken ass shit)