approved by Jho
OP Stolen from Drapionswing, which he stole from Take Azelfie

Funbot28
neomon
Jordy
Frat Dude
MysticLanturn
TRX
Winkata
GardeLame
None
For the seasonals bracket to work, we're stuck revolving around the points system that defines Champion's Cup. For that to work, we need a bracket that falls into a system with a top 16 and so on. As such, we follow the tournament ruling from the smogon tournament rules to define the starting bracket, and from there whoever is excluded is put in a pool of subs.

All tournaments that don't have a specifically approved sign up method will use First Come, First Serve for the first 62.5% of the players, and then the host must select the last 37.5% from the remainder at random.
Click to expand...

I will be subbing aggressively in this tournament because of this; be active and get your games scheduled, and done. As for how subs work, each sub has a number and we'll be randomly picking a number whenever needed. [/quote]
Rules
Ranking System

There will be 4 tournaments, 1 for every season. Depending on where you place in each tournament you will be rewarded with points. At the end of all the seasonals the top 16 points will be invited to the Champions Cup.

This edition of the CAP Seasonal will be handling points differently. In the previous seasonal, you gained points for winning matches which allowed people in the earlier stages in the tournament to get points easier, especially due to activity calls. Now to make qualifying into the Challenge Cup harder and more prestigious, you will only be awarded points based on where you place in this tournament.

why did people who signed up before your deadline not get a chance to play? Just put them in and figure out the bracket later come on son get it together
edit: you didnt include that shit in the OP and should have responsibly halted signups at 16 if you wanted to do it differently; there previous seasonals have done workarounds for bracket issues.

Snorlax in the way said:
why did people who signed up before your deadline not get a chance to play? Just put them in and figure out the bracket later come on son get it together
edit: you didnt include that shit in the OP and should have responsibly halted signups at 16 if you wanted to do it differently; there previous seasonals have done workarounds for bracket issues.
Click to expand...

Because of the way this tournament gives points towards the Champion's Cup, it's important for it to have a well defined bracket, and its standard policy for Smogon tournaments to guarantee the placement of the first 62.5% of players which signed up and then randomize the rest. This system was already used in previous seasonals for the same reasons; although I admit I should have made this clearer in the sign ups thread, that was a mistake on my part and I apologize for it.

ggs, thanks for the matches

I have defeated Frosbiyt in two good games!

EDIT: or did I really beat reachzero

EDIT: or did I really beat reachzero

too old for this shit, people younger than me should be playing these good players lol

Alright, because we now have more than 8 substitutes, I've decided to expand the original bracket up to 24 players to allow for more people to participate in the tournament.

The following users will play the next round against the winners of this phase:

Funbot28
neomon
Jordy
Frat Dude
MysticLanturn
GardeLame
Winkata
TRX
Additionally, DetroitLolcat is being subbed in place of The Elite Roman, who hasn't replied to Dj Breloominati♬ 's pm since Thursday. As there's only ~40 hours left until deadline, I'll be granting them an extension until Sunday 11pm GMT -3. The deadline for the rest of bracket will remain the same unless other players require an extension too.

shoutouts jordy for the teams ofc

Alright, Round 2 is up now. Because according to his opponent's Smogon wall, DugZa missed their scheduled time, cbrevan was granted the activity win.

Sorry about the hax G3

BTW, I made a video of my results of last matchup with snor. Have some CAP videos and good scouting material

As DetroitLolcat hasn't been online since Tuesday and his opponent informed me he won't be available until their deadline in a few hours, I will be giving Dj Breloominati♬ the activity win, so he moves to play against TRX. For now, their deadline will remain the same, although I will grant an extension if needed.

Not the cleanest three game set, but I'll take it.

Won against neomon with some preferable rolls on my end. GGs. Video likely to follow

Cbrevan gave me the win 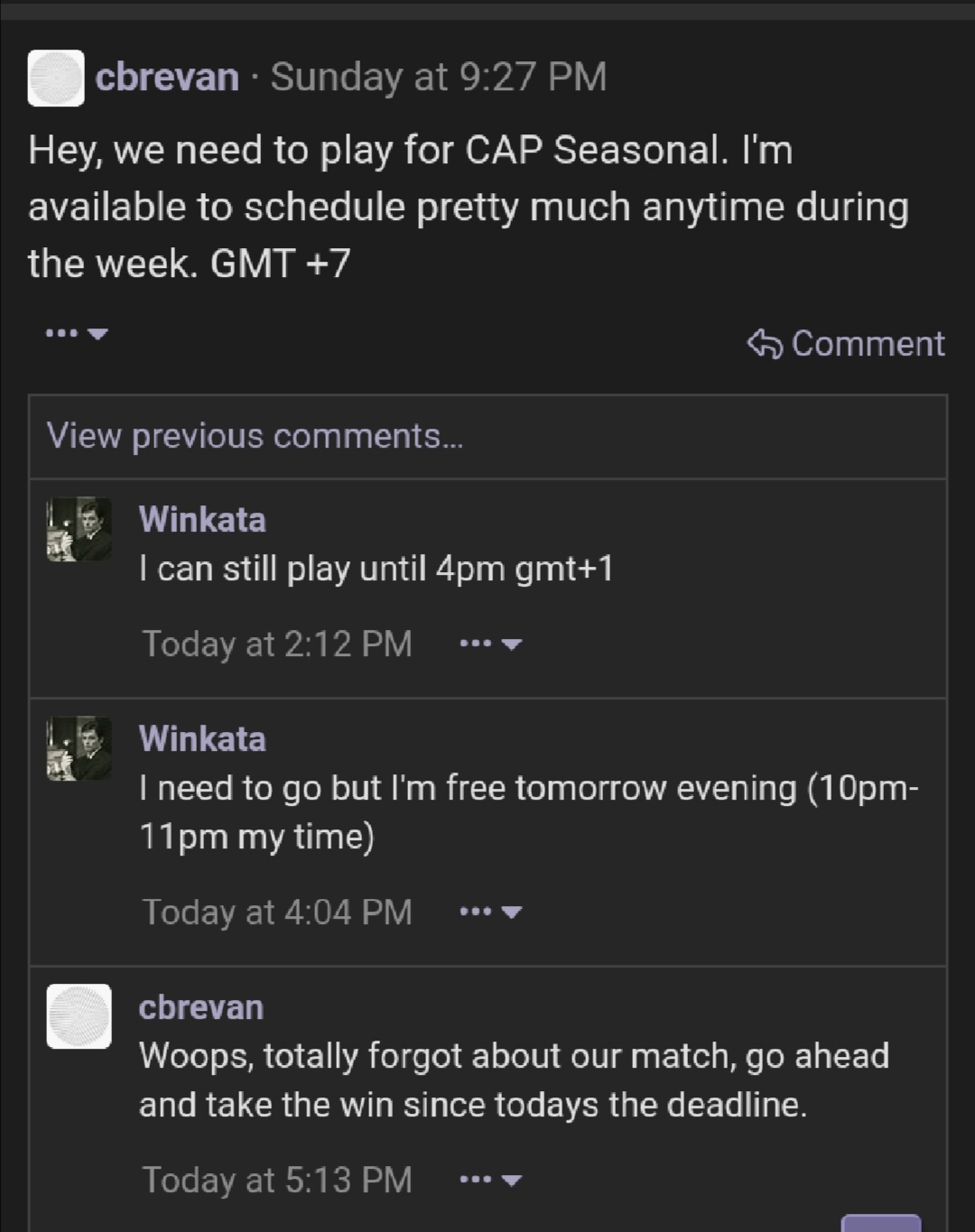 Moderator
won in 3 ggs, sorry about the crit at the end man

Calling act, opp missed time on Tuesday that we set in pms and never got back to me to reschedule.

SunMYSER asked for an extension for their game with Funbot28, so they have until Sunday to play. Yami is given the activity win. With that out of the way, Round 3 is now up. Deadline is in exactly one week, November 7th, 19:00 GMT -3.

From last round, but here's the video for my match against neomon