On to week five. Matchups are below. Please note that as this is a team tournament, no extensions will be granted. There will be no exceptions.

All standard tournament rules apply. Ghosting is strictly prohibited. Replays must be posted or else your battle will be considered invalid. Once again, since this is a team tournament, no extensions are given; substitutions are used instead of extensions. If any trade occurs this week, neither traded player will be able to participate in a battle the same week. Please complete your games by Sunday, August 7th at 11:59pm GMT-5.​

bro you got to be kitten me. ive been robbed blind, lied to and bamboozled

Baloor said:
bro you got to be kitten me. ive been robbed blind, lied to and bamboozled
Click to expand...

How was I suppose to know that Lasen would resort to necromancy???

Either the Bagons or Crawlers need needs to swap their SM slots.

i would like to request something of my opponent this week:

Please dont hax me again like the past 2 weeks, how did a rotom-w get 1v1d by excadrill with i head and a bisharp get beaten by weavile :(

Now feels like a good time to commentate on team standings for the final week and which teams are looking to make it into the finals brackets, because the competition is crazy close right now, with the most prominent feature being the three-way tie for the Rank 1 spot! I am operating under the assumption that points = placement so if that's factually incorrect consider me stupid and unviable.


Weathermen Whimsicotts
Having fallen into dead-last, there is unfortunately no hope for the Whimsicotts to make it to semis. A series of heavy losses outside of a tie versus the Lechonkers in Week 2 has left a -12 deficit on their side. At this point, the main goal for the Whimsicotts is one last hurrah to clutch out a victory against the Saharajas, and at least have some of their high-profile players really show up strong in this final series. A 7-1 victory would provide enough points to surpass their opponents in the end: though with little to gain, there is also little left to lose, and such a relaxed position may bring out some pretty insane builds and battling prowess from players hoping for one last chance of glory this CAPPL.


Storming Saharajas
Although sitting in second-to-last place, it isn't over for the Saharajas: the scores have fallen in such a way for the right sequence of events to get them into third place, though getting there not only requires a lot of skill on their end, but favorable luck from the other competing teams: if they can pull off a 6-2 victory against the Whimsicotts, and either one of the other pairings also has a 6-2 score, or the Bagons lose, they will have successfully made it into playoffs. Alternatively, a score better than 6-2 will ensure their position no matter how the other teams perform. This is a very demanding situation either way, as the Saharajas struggled to find their footing until recently, and even winning not being enough to make it in stacks the odds against them. Without 3k carry Fogbound Lake making an appearance this week, the Saharajas need to secure key matchups to relieve pressure: victories against quziel and Darek, who have not shown up this tour as expected, and SHSP pulling out all the stops in Bo3 puts them in a prime position. Luna being pitted against JayHeaven, debatably the scariest player on the Whimsicotts, is a precarious situation for one of your best players to be in, but winning this matchup would be a good sign of things to come.


Thatcher Begone Bagons
The Bagons kick off the main contenders for a first place finish; despite dominate showings in the first half of the tour, that momentum seems to have slowed down considerably, and riding off a loss to a previously winless team isn't a good precedent to follow. Star player Clementine, one of the few players so far with a perfect record, is sourly missing as well, though their lineup is far from weak with the good performances of jonfilch, gorex, and Revenge Killer thus far. Outside of this, however, things are far more complicated, as the Bagons have otherwise relied heavily on these players to secure wins. spoo, D2, and Jordy especially have been underperforming despite their skills, and even OMPL X champion Finchinator-approved stealth carry Potatochan seems to have lost steam. There's a fair bit of scary matchups against the Crawlers, particularly against Micaiah and apparent 3k carry Atha, who are pitted against Bagons players which definitely need to be winning here. Similarly, TNM should remain a threatening opponent despite a mediocre 2-2 record so far. If ORAS can be taken control of as looks fairly likely, and Seo wins versus AM, that will provide the platform they need to get back into fighting order.


Aogiri Aurumoths
I feel like the Aurumoths have been the strangest team in this tournament by far: their most expensive player in ausma sitting dead-last in ranking, and no players outside of pannu standing out as exceptional so far. Nonetheless, this team is far from being incapable of making it to finals, and may even be favored. If wins against snaga and Mimikyu Stardust are attained by pannu and astralydia respectively, they should have enough raw strength to push through the rest of the Lechonkers lineup, and this team definitely has good clutch factor going for them. Fc getting the upper hand against velvet here would be huge for their chances assuming those two win, as one of their remaining players should be able to even out scores. DugZa returning to form here would be a massive advantage in their favor, as would the continued success of Fakee and/or Kate, but it's not an easy sell considering all we've seen (or perhaps not seen) thus far; good prep and team mentality are going to be key here for the Aurumoths to get themselves into the next rounds.


Cannon Crawlers
You would think that a team being managed by a literal child half the age of his co-manager and a consistent inability to submit lineups on time wouldn't be favored to make it to finals here, but the truth is the Crawlers have really turned things around. Although their record isn't any better than the competition, their progression is critically important, as they started off with a pretty poor loss initially, but then tied in Week 2 and swept through Weeks 3 and 4 rather convincingly, with two of their losses against the Lechonkers being par for the course at this rate. Micaiah and Atha are on winning streaks so far, and Piyush has been just as solid up until recently. Them winning is a good start, but won't be enough on their own. The Number Man has definitely not performed according to the 28k price tag attached, and Jho was sadly not unleashed at the power some expected; while being pitted against 0-4 Jordy may seem good, who knows where this match may go. Meanwhile, though Blui and So Noisy have done alright so far, gorex stands in the way of the former, and the latter's 2-0 record comes off of a winless quziel and the double-sub airfare, who had yet to play at all and was rather unceremoniously slotted in. There's a lot that go right for the Crawlers here, as they've has a good showing recently, but competition is extremely tough and one thing going wrong could spell disaster.


Lechonkers
With the makeup of an all-star team, the Lechonkers being a contender for finals is no surprise: what is alarming is how things have been shaped up for them by this point. The most obvious points in their favor are the 4-0 records of DetroitLolcat and velvet; having two undefeated players going into the final standard week is quite comforting, and their repeated success will provide a strong start for the Lechonkers' race to the finish. A 2-1 record on sasha's end may not be as immediately impressive, but achieving wins against Jay and Jho is no small feat, and should hopefully leave a favorable matchup into anique. Beyond this, however, nothing really stands out among their ranks. RaJ.Shoot isn't doing so hot right now, and though Steam Buns hasn't performed poorly by any means, his actual presence has not been desirable for one of your 10k players. Mimikyu and tier have faltered significantly since Week 1, to the point where tier was swapped out for ojr in ORAS, who has but a single 1-0 win to their name. Luisin's apparent absence throughout the tournament is likewise concerning for the Lechonkers' continued drive to press onward. If they can get DLC and velvet to continue the win streak, then have sasha take SM, they should find themselves in a more favorable position, while having RaJ turn it around and/or Buns not get owned by complications of Australian origin would make for an easy route to a victory or at least tiebreaker situation.
Last edited: Aug 1, 2022

Giving reasonings is for suckers

And then, Hefest got this run

I won against Jho, gg. Looked forward to playing you.

let's goooo team we've got it 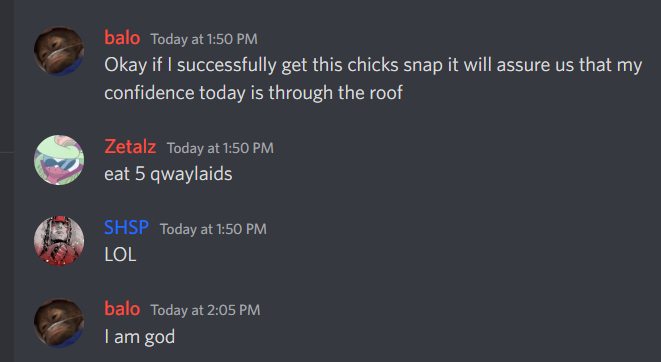 won sorry to all parties https://replay.pokemonshowdown.com/smogtours-gen6cap-642125

Mimikyu Stardust said:
i would like to request something of my opponent this week:

Please dont hax me again like the past 2 weeks, how did a rotom-w get 1v1d by excadrill with i head and a bisharp get beaten by weavile :(
Click to expand...