Hey there and welcome for a confined RMT. I decided to share this team with people because it has been quite effective on the ladder versus the majority of the current metagame. Since UULT is underway, I think it's quite nice to share a HO like that because it's quite easy to play with it which lets people enjoy it while laddering. It's a pretty straightforward Screens HO but the team is quite nice overall... let's dive into it !

Espeon is in my opinion the best screeners in the tier at the moment due to its great speed and access to Magic Bounce which allows it to prevent the opponent to set its Entry Hazards, the main purpose of Espeon is simple, set-up Reflect and/or Light Screen to allow its teammates to setup and shred the opponent. On the other hand, I decided to try Dugtrio-Alola which is a pretty niche Pokemon in Underused but it has some real benefits as a Suicide Lead in my opinion. First of all, it's really fast for a Stealth Rock setter and has a great STABs coverage which allows it to pressure a lot of common Pokemon such as Sylveon, Incineroar, Rhyperior, Cobalion etc.. but it also has access to Memento which is a bless for its teammates because it almost ensure them to setup. Dugtrio-Alola also have a quite interesting ability : Tangling Hair, which lowers the opponent's speed if it makes a contact with Dugtrio-Alola. This allows Dugtrio-Alola to bother some Pokemon such as Cobalion or Darmanitan. Overall this two paired well together and can support their teammates.

Shell Smash users are always nice under screens and that's why I decided to play Barbaracle. I decided to opt for tricky set with Protect + Life Orb which allows it to pressure really hard a ton of Pokemon in the tier while still being able to bypass revenge killer with First Impression such as Choice Band Haxorus or Golisopod. Life Orb allows Barbaracle to claim some important OHKO particularly on Cobalion or Bronzong which are OHKOed from full. I opted for Rock Blast to allow Barbaracle to bypass Focus Sash users if I wasn't able to set my Stealth Rocks. However, Stone Edge is 100% legit too.

Haxorus is one of the most threatening setup sweeper in Underused and probably the best wallbreaker in the tier. The main of Haxorus is to break in early/mid game to allows its teammates to clean in the late game. Haxorus is also often used as a death fodder vs Pokemon like Noivern or Flygon. It forces Noivern to use Draco Meteor to remove it which allows its teammates to abuse of Noivern at -2 and setup with ease even if screens are not up so don't be affraid to sacrifice Haxorus. I opted for Poison Jab to shred opponent's Sylveon, even if they are max HP/Def. Earthquake is the best coverage for Haxorus and allows it to punish Steel-types such as Cobalion or Doublade while Dragon Claw acts as a nice STAB.

Like Barbaracle, Linoone enjoys a lot screens which allows it to setup with Belly Drum. Linoone is actually a pretty underwhelming threat and sometimes you'll be able to setup turn 3 and then clean the entire team thanks to Extreme Speed. Throat Chop is used to beat Bronzong, Doublade and Ghost-types while Seed Bomb is useful to punish Rock-types and Quagsire. The EVs spread allows Linoone to outspeed max speed Bewear and Sylveon but also Modest Polteageist.

Last but not least, Toxtricity acts as the final piece of the puzzle. Shift Gear allows it to outspeed almost any Pokemon including the vast majority of UU's Choice Scarf users. Overdrive is the best STAB of Toxtricity and Boomburst is overall fantastic and this Pokemon and allows it to hit Ground-types. Like Barbaracle, I decided to opt for Protect instead of coverage to prevent Toxtricity to be revenge killed by First Impression's users.

My perfect blond Lead. Its main purpose is to set the Stealth Rock and then pressure the opponen with its STAB or just use Memento to allow its teammates to rush into the pile.

Much like Dugtrio-Alola, Espeon has one purpose, set its screens to ensure the setup of its teammates. Psychic acts a solid STAB while Toxic is useful to cripple some defensive threats or Dark-types such as Incineroar.

After a single Shell Smash, Barbaracle is able to pressure to an extreme extent the UU metagame. +2 Life Orb Liquidation / Rock Blast allows it to OHKO/2HKO the vast majority of the tier and Protect is super useful vs First Impression's users. Life Orb is the key of the set and ensure Barbaracle to claim some KO that it could not normally imagine such as an OHKO on Cobalion and Bronzong.

Haxorus acts as the main breaker of the team and forces some Pokemon such as Noivern to revenge kill it with Draco Meteor which then allows its teammates to setup on it. After a single Dragon Dance, Haxorus is able to outspeed almost any Pokemon while being able to hit insanely hard. Dragon Claw does solid neutral damages while Earthquake hits Weezing-Galar, Incineroar, Rotom-Wash but also Steel-types such as Cobalion, Bronzong or Doublade. Last but not least Poison Jab hits Sylveon which can otherwise pretty well Haxorus. After Stealth Rock damages, +1 LO Poison Jab is an OHKO on max HP/Def Sylveon.. That's dumb.

Linoone is a fantastic cleaner thanks to Belly Drum + Extreme Speed. Once the opponent's team is weakened, Linoone can really overwhelm the opponent's and clean without much trouble. Extreme Speed is quite fantastic and allows it to not be revenge killed by Golisopod and Sirfetch'd First Impression since it outspeeds them. The only First Impression user able to outspeed it is Haxorus which is Choice Band most of the time with this attack which means if it revenge kills Linoone is a free setup for one of its mates. Throat Chop and Seed Bomb are the best coverage option for Linoone in the current metagame.

Toxtricity is the only special sweeper on the team and a fearsome cleaner/wallbreaker once it used Shift Gear and has consumed its Throat Spray. Like Linoone, Toxtricity is really good in the endgame when its checks/counters have been weakened by its teammates. It's also really hard to revenge kill thanks to Shift Gear + Protect which ensure it to outspeed the vast majority of the tier while not being weak to First Impression's users.
​
THREATS

Opponent's Haxorus can be really tough to deal with especially Dragon Dance variants. If it's able to go +1 Atk/Spe it's almost impossible to come back.

Stealth Rocks are mandatory vs Polteageist because it breaks its Focus Sash. Since the only priority on the team is Extreme Speed, Polteageist is able to 6-0 the whole team after a Shell Smash, nothing on the team can take on this beast once it's setup. Fortunately with Stealth Rock up, it can't handle any hits from the team (besides Toxtricity if it hasn't used its Throat Spray yet.

Flygon has a decent match-up vs my team since all my Pokemon are grounded and half of them are weak to its STAB Earthquake. Luckily, under screens it can't OHKO Haxorus, Barbaracle or Linoone which allows to setup or KO it. 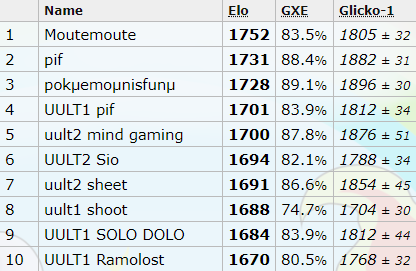 While I definitively agree that this team doesn't bring some new real tool to the well known screens HO, it has some details which allows it to stand out from the others. The main goal of this RMT was to share this team with as much people as possible because I really enjoyed playing with it. The team is also quite easy to use so it's nice if it can help some new UU players to enjoy a bit more the ladder. Anyway, thanks for the reading and I hope you liked my third RMT and first one in the SSUU format. Be safe and stay at home

Moutemoute grats on the ladder peak. I have a few suggested changes that could help to deal with the issues you brought up with the team. As you have said yourself, this team is unfortunately 6-0d by Polteageist if rocks don't get up, meaning Polteageist Screens are an incredibly tough matchup cause of opposing Magic Bounce. The Flygon stuff you mentioned can also be fairly easily fixed.

One of the best fixes to this team to help with Polteageist is to put an SD Incineroar on your team, which is a fantastic option on Screens right now, and great at weakening stuff like Rhyp/Giga for your Toxtricity too. Obviously since you lose rocks, you'll have to add them on Barbaracle instead of Protect, but splitting Rocks onto an extra Pokemon wasn't really worth it when it made this crippling weakness. Weakness Policy is an interesting option on SD Incin under screens letting it make use of Intimidate + its natural bulk, but Shuca is a fine option too.

Xatu is typically a better screens setter right now, Teleport is absolutely invaluable momentum for HO teams, and the ground immunity/extra bulk are especially handy. In particular, giving you a ground immunity helps with Flygon here.

Poison STAB is definitely a better choice than Protect, which isn't super useful behind Screens anyway. Its definitely more valuable for its ability to pressure Sylveon.

(optional) One issue with the super bulky spread you are using right now is that Chandelure can just outspeed and revenge kill you. With Incineroar change you obviously might not mind this as much though. (196 Speed EVs would creep Chandy)

(optional) While the extra damage from Life Orb lets it get some guaranteed OHKOs you mentioned, resist berries are arguably a better option for allowing you to set up easier and keep your HP out of revenge kill range without tect, and without Protect the Life Orb chip would make it easier for stuff like Goli to revenge you through screens.

i tried trio as well and found that iron head isn't particularly useful on dugtrio. rock tomb works better instead. you get to slow down special attackers as well as physical ones which is good. other than that most of estarossa's suggestions are good. if you do want to patch up the polt matchup change linoone to incin, not duggy. you can try different berries, shuca might be a cool one for you, gets flygon and pressures giga / rhyp for tox. i dont like having psychic as the only attack on xatu, you could probably mess around with other options like a flying move (idk which one it gets) or a status move but this is w/e ig.
You must log in or register to reply here.
Share:
Reddit Pinterest Tumblr WhatsApp Email Link