Thanks to tiki for the banner!​
I will post some shit here alongside Boat and Arai

Moderator
Our sheet is (kinda) ready and can be seen at http://spo.ink/cplv.

Contact one of the hosts if the results for your team are not correct! 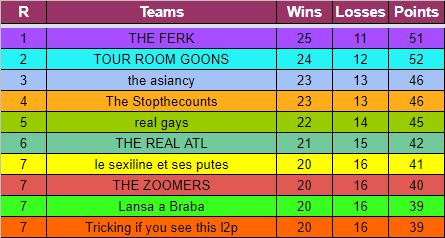 Lansa a Braba, although completely tied with Tricking if you see this l2p, won the hxh with a 1-0 record (HANTSUKI v Aurella). the asiancy and The Stopthecounts were completely tied and also had a tied hxh at 1-1 (Skyrio won vs. Altina, trace won vs. CMDoge). As such, I picked the higher seed:

To define the 7th and 8th positions, our tiebreak will consist of:

Situation : The activity win for Xiri over Dread Arceus was inputted incorrectly, leading Dread Arceus's team to believe they qualified, and leading the hosts to believe the tiebreak was four ways. In reality, the tiebreak is a five ways for the last three spots. This tiebreak is not feasible for a team tour, especially one with such short deadlines. We will be advancing the team with the most points (le sexiline et ses putes) to 6th seed, leaving the other four teams to play the tiebreak. THE REAL ATL expressed some frustration with the possibility of them tiebreaking, stating that they only let Dread Arceus vs Xiri go to activity under the assumption they had 21 points. However, a closer inspection of the timestamps of scheduling show that, in addition to the fact that sugarhigh never responded to Xiri, the substitute and subsequent scheduling attempt occurred during the dead of night in Xiri's timezone. Xiri and Dread Arceus's manager did make contact, but only after the deadline had passed. Therefore, we reaffirm the decision to give Xiri the activity win, as his initial opponent never scheduled and he had no opportunity to play the substitute.

Result : le sexiline et ses putes advances to playoffs. The tiebreak is between the following teams: THE REAL ATL vs Tricking if you see this l2p, THE ZOOMERS vs Lansa a braba. 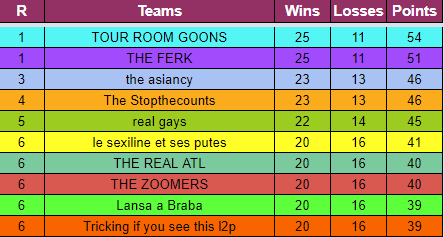 I'd like to apologize for the confusion and frustration this caused. There's a lot of matches to update, and unfortunately mistakes are bound to happen. This mistake was late enough that nobody caught it until it was too late, and that's our fault.

Moderator
Re : Eternal Spirit vs frisoeva

Situation : In the SS OU game of their Bo3 series, Eternal Spirit purposefully threw a 100% win condition on the last turn of the battle. This is blatant game throwing. Because this is an unofficial tournament, Eternal Spirit will not be tourbanned. He will, however, be banned from the remainder of Coronavirus Premier League V and any future editions of the tournament. He will also be infracted. The result of the game will stand.

Result : Eternal Spirit will be infracted and is banned from this and the next edition of the tournament.