won in a close one gg 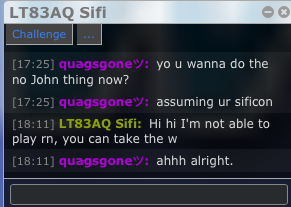 Moderator
Starting round 5 early because all games were played. Players will still get the full 4+ days to play.

If there's something wrong with this round or the last please contact me asap. Remember that replays are mandatory.

Hype update: there's 12 great players left :) Next round, the semi-finals, there will only be 6 left, and those who make it to the finals will be guaranteed cash prize winners!!!! Good luck to everyone left, you're all really close to some cash x)
Last edited: Jul 26, 2021

Excuse the lack of explanations here, decided not to because I don't know more than half the players well enough and haven't looked at their replays. That being said, all of these are exciting matchups and while it's a shame much of the ZU mains dropped along the way, it's fun to see new players join and play the meta. Looking forward to drud vs ninja and quagg vs antares the most perso

Gray  vs  Chokepic (40-60)
Gray knocked me out but overall I am much more impressed with Chokepic’s play. No knock on Gray as a player but he has gotten repeatedly lucky in this tournament, with my fat finger moment in our game and haxxing through opps. Gray is a great player in any tier he touches though so wouldn’t be surprised to be wrong in this one. Imo Chokepic has a better grasp of meta


Drud  vs  Ninja (70-30)
Hard to bold against Drud in a ZU tournament after his most recent run in ZULT, and I don’t see the repeated uses of an albeit well piloted team from Ninja working out this time against the more comfortable player.

termi  vs  TonyFlygon (50-50)
Probably one of the best games to watch this series, two newer ss zu(from what I know) players who have been having very good runs. Both competent pilots, Tony’s last game was full of hax and yet his past games have been very dominant. Was very impressed by termi’s ability to play through an interesting match up vs Terreitor last round, so looking forward to a nail biter.

Quagg  vs  Antares (80-20)
Antares is an interesting player to watch. Very linear team structures from what I’ve seen here and in the many room tours we’ve competed against each other. Quagg on the other hand is an established ZU player with a versatile playstyle, and so long as Quagg is able to deal with whatever cheese webs or other spicy tricks Antares has up their sleeves, he should take this handily.

TJ  vs  OnArceus (45-55)
This may be a mispredict, but let me explain to you why I believe OnArceus might take the win in this other highlight game. TJ is a well known and established tournament player whereas OnArceus is an up and coming tour wrecking ball. From what I’ve seen whether it be RU Seasonals, NUPL, or other tournaments, OnArceus has the ability to come in and beat established players. Although his teams have not been as unorthodox as his higher tier teams, he is extremely well at piloting out of poor situations to flip the tide of the game in his favor. In my one tournament game vs TJ, the usually weird pick of offensive Silvally Water caught TJ off guard, and gave me the upper hand throughout the game. If TJ reuses a team and OnArceus builds some anti meta heat, I can easily see OnArceus stealing this one. If OnArceus chooses not to, the more comfortable player in TJ should be able to stave off most common teams with general good play. Gotta make a spicy predict though and this one is it.

TheFranklin  vs  oversway (60-40)
I gotta say, this series intrigues me. After watching the replays of the most recent games for these two users I have to say I wasn’t too impressed. Don’t get me wrong a W is a W and making it this far is an accomplishment in and of itself but starting with TFL’s run, winning vs kay with Freezes and Crits, and then proceeding to fight an odd team from a fruitshop owner isn’t the most impressive thing ever. TFL is still an amazing player all around and has been able to pilot the Frosmoth balance team to near perfection, but those two wins weren’t enough to sway me to be 100% TFL in this mu. On the other hand we have oversway who got an act win in round 3(no fault to them just less replays for us to watch), and then had to fight OBB, an common player in the ZU scene. But the team that OBB brought seemed 6-0d by Silvally ground and Altaria of all mons, and luckily enough oversway brought the commonplace Ninetales+Groundvally hazard stack balance. Not too much else to say other than these guys have had some pretty fortunate runs, and I’m hoping to see a very good match from these two seemingly underdog ZU players. Based on what I have seen though, TFL seems better overall, and his team has been very effective at what it sets out to do.

Looking forward to some fun matches and cool teams in these later stages of the tournament, and pls don’t John the No Johns tour ;)
Last edited: Jul 21, 2021

Termi vs TonyFlygon: Flygon is illegal, and Termi knocked me out.


Quagg vs Antares: Quagsire may be illegal, but at least it’s a pokemon. I have no idea why an autotune software is playing mons.

TJ vs OnArceus: Normally I’d make an exception to the legality rule for the god of all pokemon, except that it doesn’t exist this gen. TJ beats Sandhagen on the weekend, and TJ wins here too.

This was just a joke, please don’t take these predicts seriously. I would be lying if I said I knew more than 5 ppl left in the tour. That being said, GL to everyone!

Played pretty poorly throughout the entire game, specially in the end game but won thanks to a perfect mu. Still gg though: https://replay.pokemonshowdown.com/gen8zu-1382834039

won vs ninja, gg thanks for putting up with my scheduling

This is the last chance to make it to the money round!!! Finalists are all gauranteed cash, so win here and you’ll win some dough. Good luck, and please tag us in the ZU discord when you play!
Last edited: Jul 27, 2021

Antares vs TJ: Both TJs won their respective battles, TJ dominance continues. Sorry but I don’t like autotune

Chokepic vs TonyFlygon: Flygon got choked out of NU and so is used to chokes.

TheFranklin vs Drud: You don’t predict against arce9

once again, take this with a grain of salt