I have nothing to seek or offer but I just wanted to wish you the best of luck with your beautiful new thread! I hope that many happy cabbage babies may find a warm and welcoming home here.

Aye, I hope this thread blooms into a beautiful garden for the cabbage babies.

free to be the greatest

Chief is just swinging by on his Chandelure to wish you lots of fun with your trade thread.
It's nice to see so many new threads blossoming in our section.

Good luck with the cabbage garden!

good luck my lovely the minute I get a cool level 1 pogo shiny I can send to gen 8, they’re all urs :wiggly:

Btw, if you're interested in it, I do have this lil lv 1 guy from Go. Spe SRing got messed up unfortunately because I accidentally clicked save in the dum Go Park menu 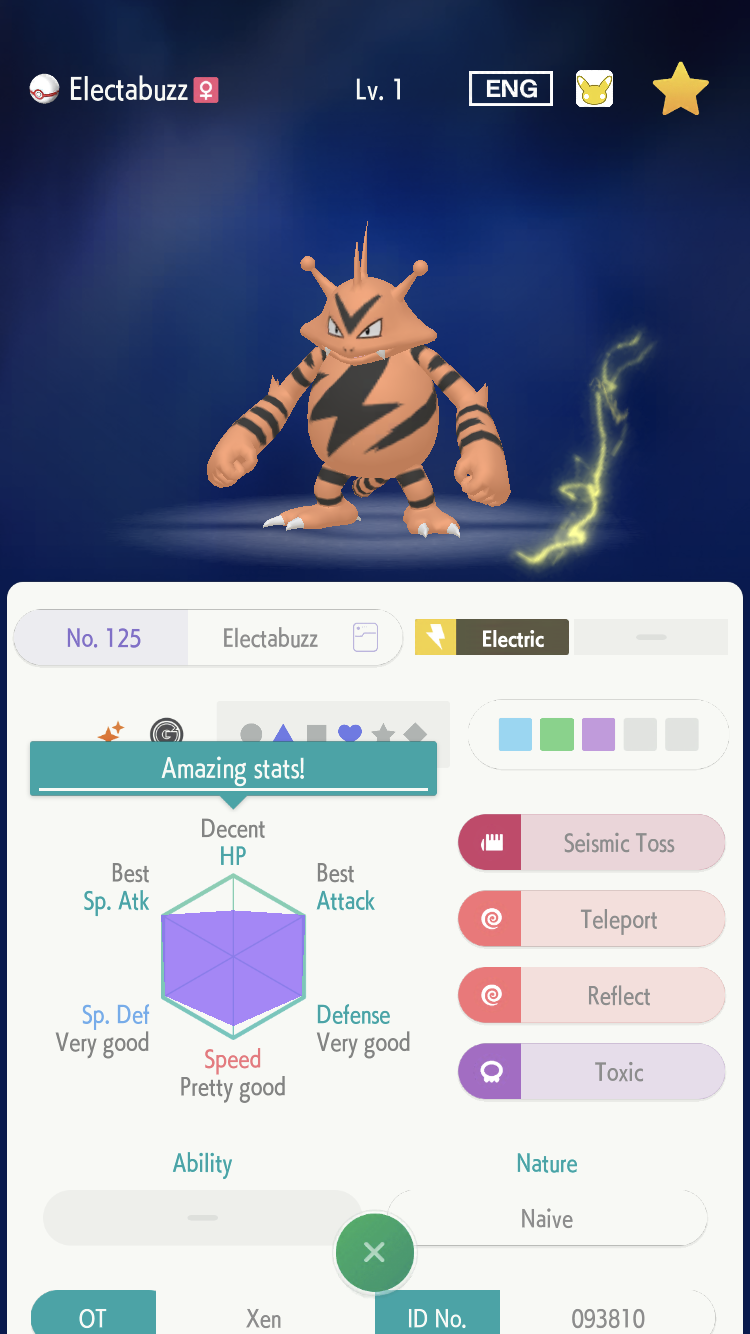 Xen said:
Btw, if you're interested in it, I do have this lil lv 1 guy from Go. Spe SRing got messed up unfortunately because I accidentally clicked save in the dum Go Park menu

Ohhh what a good baby!! I also messed up the speed resets on an articuno so I feel you there, that interface is a menace.
Is there anything from the thread that catches your eye? I’d love to trade for it

Skadiv said:
Ohhh what a good baby!! I also messed up the speed resets on an articuno so I feel you there, that interface is a menace.
Is there anything from the thread that catches your eye? I’d love to trade for it
Click to expand...

A copy of Keros sounds cool, if you're fine with that?
Also would you rather have it as Buzz, or Electivire?

Xen said:
A copy of Keros sounds cool, if you're fine with that?
Also would you rather have it as Buzz, or Electivire?
Click to expand...

Electivire would be great! I’d be happy to send Keros your way. My internet is struggling so It might be a bit before I can trade, is it ok if I ping you in discord once it’s back up?

Skadiv said:
Electivire would be great! I’d be happy to send Keros your way. My internet is struggling so It might be a bit before I can trade, is it ok if I ping you in discord once it’s back up?
Click to expand...

Sure thing. Just ping me there whenever :)

New Showcase Pokémon
(All are NFT)

Thank you Anubis for these!

"Apophis" refers both to the Egyptian god who embodied chaos and to the near-Earth asteroid (99942 Apophis) discovered in 2004.
The reason for this name is tied to Gastly's chaotic shiny factor, which should result in g8 stars but doesn't do so in practice.
He is a xor8 shiny caught by botting LGPE's GO Park at 13865 encounters after missing one at 7738.

However, the gen 8 games have an override to always display GO shinies as square.
If not for that, this would be the equivalent of an overworld star shiny in SwSh.
His unusual sparkle is masked for now.

"Daedalus" is a name of Greek origins that means "craftsman".
It's a nice fit on the surface because some grubs must make a little cocoon in order to protect themselves during a stage of their metamorphosis.
However, that explanation isn't the real reason behind his name. His Origin Seed has 6 Ds ([...]DD5[...]) which is what inspired the choice. His encryption constant is also aesthetic as it is 6-digits long (preluded by 0s) and is composed only by numbers.
The best part? No one is able to tell by just looking at him. His cute entrails are a secret to strangers.

Thank you Lego for the guidance!

Art peeled by Anubis.
This cabbage will be a PID search for a E995E995 Shaymin.
The IVs are still undecided.
Might also receive ribbons depending on how lazy I feel.

One can always dream, right?
The estimated rate of appearance for a curry mon with a full bonded + full friendship party of 3 is of ~1/5.
Wooloo, Joltik, Budew, Cutiefly, Ferroseed, G-Meowth and Milcery all share the same non-overworld slots in the route I chose.
This is a full odds shiny hunt and possibly one I'll never see through.
Last edited: Jun 4, 2021

You know I am right n_n

Love the thread! Good luck on your future hunts!

Thank you for the kind comment! Wish you the best of luck for your own :)

Changed up my thread. All of the tradeable Pokémon are now Fully Redistributable.
I don't really care too much about who has my stuff. The more people enjoy it, the better!

Proof
Given to me by my friend Benny.

Hi hi everyone! I forgot to post back in June that I'd be disallowing comments for a while, whoops

(Thank you Max. Optimizer for locking/unlocking this thread)

I'm on a study break so I wanted no distractions, however, I enjoy tending to this too much to leave it aside completely.
I also got a better grip on how to organize my time so this'll be a nice thing to do when tired of studying.
While I will still be mostly MIA, the thread will be updated with ribbons and stuff I might find.
Big hugs to all of you cute forum users.

Proof
The Jolly nature and 30 speed make Oliver, by far, my luckiest transfer until now!
I'm really happy that the good rolls were on him and not on random fodder.
BIG s/o to Lego for all of his help! I'd still be a huge PoGo noob if not for him.

PoGo Victini is a cute mess.
This mythical encounter, unlike others, was set to not have an infinite amount of balls.
If one were to get rid of all of their normal poke balls and great balls, an ultra ball catch is possible.
There are also reports of users being able to feed them berries through an encounter HUD which is still a mystery.
Great and Ultra ball PoGo Victinis are way more elusive than regular poké ball ones, which makes me appreciate this little guy even more.

Entei was obtained through a PoGo trade with Lego.
He represents the eldest of the three cat brothers whom I adore.
As the king of the house, everyone knew not to mess with him. Even if he is a loving goof.

Suicune is named after my fave cat, brother of Moose and Oscar. His temperament, habits and personality fit this Pokémon like a glove.
He's the type of cat who always has something to say but only if he deems you worthy enough of his time. Expressing himself both by indecipherable chattering and by harassing online onlookers with walls of text through comfy keyboard strolls.

The nature and speed roll he got through HOME make this Pokémon a fitting tribute to him.
Last edited: Aug 12, 2021

It's a very nice thread. I look forward to seeing it grow (and possibly contributing to that growth myself) in the future! :)

Rain Moon said:
It's a very nice thread. I look forward to seeing it grow (and possibly contributing to that growth myself) in the future! :)
Click to expand...

thank u rain!! i still have your evolved blades otter but id like to get its ivs before including it :) will add it once i do!

Hosted by Lego in the Smogon WiFi discord from 10/01/2021. Caught in all available balls!

Hosted by Lego in the Smogon WiFi discord from 10/01/2021. Dive ball catch will be kept uncloned and will be cherished in my trophy collection. Lost a repeat ball catch due to not saving the game.

Hosted by Lego in the Smogon WiFi discord from 10/01/2021. Couldn't get it in Beast before burning out.

-NFT-
Some of these Pokémon are Fully Redis. but for the purpose of this thread I won’t be offering them.
Special few
Small sodden birby

Hosted by Lego in the Smogon WiFi discord from 10/01/2021. This little bee bird remembers getting soaked in the rain, which matches the thematic Dive ball. She is the next iteration of a Rowlet who used to be in my possession but somehow got sucked into a void. No idea how it got lost but I'll make sure that Bee doesn't escape in the same manner.

Traded / Fandom Pokémon
A whole set of AoT inspired pokemon given to me by M.O. after finishing the animated series

As taken from M.O.'s description:
The nickname is a reference to Zeke Jäger from Hajime Isayama's ❝Attack on Titan❞ manga series, host of the Beast Titan.
Challenge Beach, his hatching location on the Isle of Armor, is a reference to the docks of Paradise Island with the help of which Marley's warriors go ashore.
❝Isn't war a terrible thing?❞
Bred by Christian, hatched by Max. Optimizer

As taken from M.O.'s description:
The nickname is a reference to Reiner Braun from Hajime Isayama's ❝Attack on Titan❞ manga series, host of the Armored Titan.
The Safari Ball in military camouflage colors was chosen in order to reflect the ❝warrior❞ theme.
❝I don't know... what's right anymore... But... I do know that I have to face the consequences of my actions... and carry out... my duty as a warrior to the end.❞

As taken from M.O.'s description:
The nickname is a reference to Eren Krüger from Hajime Isayama's ❝Attack on Titan❞ manga series.
He was an Eldian spy that had infiltrated the ranks of Marley, while secretly helping the Eldian restorationists under the code name ❝The Owl❞.
❝The only truth in this world is that there is no truth. Anyone can become a god or a devil. All it takes is for people to believe it.❞

Looks great Mica :) Give Stunfisk some love though.

New update!
A ruthless warrior, one big chonker and a pair of marked puppies join the fray.
Only Mikasa is NFT, the rest are fair game!

Treasures from my friends

Deadly and in possession of a pretty red "scarf", Greninja is the perfect embodiment of Mikasa Ackerman from the AoT series.
This particular Pokémon was given to me by Max. Optimizer and is an especially cherished friendship token since he calls me "Micasa".

She also represents my excitement for the series in a similar way that Lara the Marowak does. Lara holds a "group" aspect since I watched the series with Lego (who contributed to Lara's RNG by M.O.) while Mikasa (my favourite character) represents my personal enjoyment of the series.

Big S/O to The Chaotician for allowing this wonderful Pokémon to be sent my way.

Watchtower Crystal (Celebrate + Wish) G-Max Pikachu event (10/10/2021-10/24/2021).
Hosted by Zyro on 10/11/2021. The watchtower crystal den events can be shiny but cannot be rolled like a regular den. This den was found by creating save files until the first frame of the watchtower was a square shiny (read with a CFW console). Only then was a code utilized to spawn and host the raid. Beast ball catch took 20 attempts!
Beast ball proof

Puppy daycare paid off! This dog is well socialized and ready for a home. Found while watching Kiki's delivery service.

" In Norse mythology, Sköll (Old Norse "Treachery" or "Mockery") is a wolf that chases the Sun (personified as a goddess, Sól) " - Source
The Beast Ball choice for both Sköll and Hati alludes to how the two of them chase the respective celestials around the globe, leaving behind a trail.
0 attack is ironic because Sköll will chase the sun for eternity, she's not strong enough to catch it.

Glad you are pleased with Mikasa! Holler at me if you are interested in anything else I have :)

The Chaotician said:
Glad you are pleased with Mikasa! Holler at me if you are interested in anything else I have :)
Click to expand...