Thread Update!
Thank you Lego and Nitachi for the Valentina and Vurazir art pieces respectively!
Thank you TyVip for the Galarian Articuno!
All NFT

A new look for two of my favourites

Capture proof
"Valentina" is a name that means healthy & strong.
She was found while searching for a Sandstorm Mark Lopunny in the Challenge Beach, "rare mark and yet the hunt continues" indeed.
Her internals say that she's extremely tall, her nature is Sassy and her IVs are oriented towards attacking rather than defending.
I love it when the game gives my pokemon a great attitude!

Art by Hutt gifted to me by Lego!
Lego’s reference sketch

Misc.
Adam why
Tried our best

Capture proof
"Vurazir" is a name that combines the word "Vuur" (Fire in Afrikaans and Danish) with "Azir" who is known as "the emperor of sands" in LoL.
This is one of the pokemon that fits the "Pokemon that look hacked" criteria in my interests as this mark on a Galarian Moltres was previously thought to be unavailable. The explanation can be found here.
When posted in different servers, It got called out for having an "illegal" sandstorm mark which needless to say, gave me happy brain juices.
He wears Safety Goggles to make sure that no sand gets into his eyes. 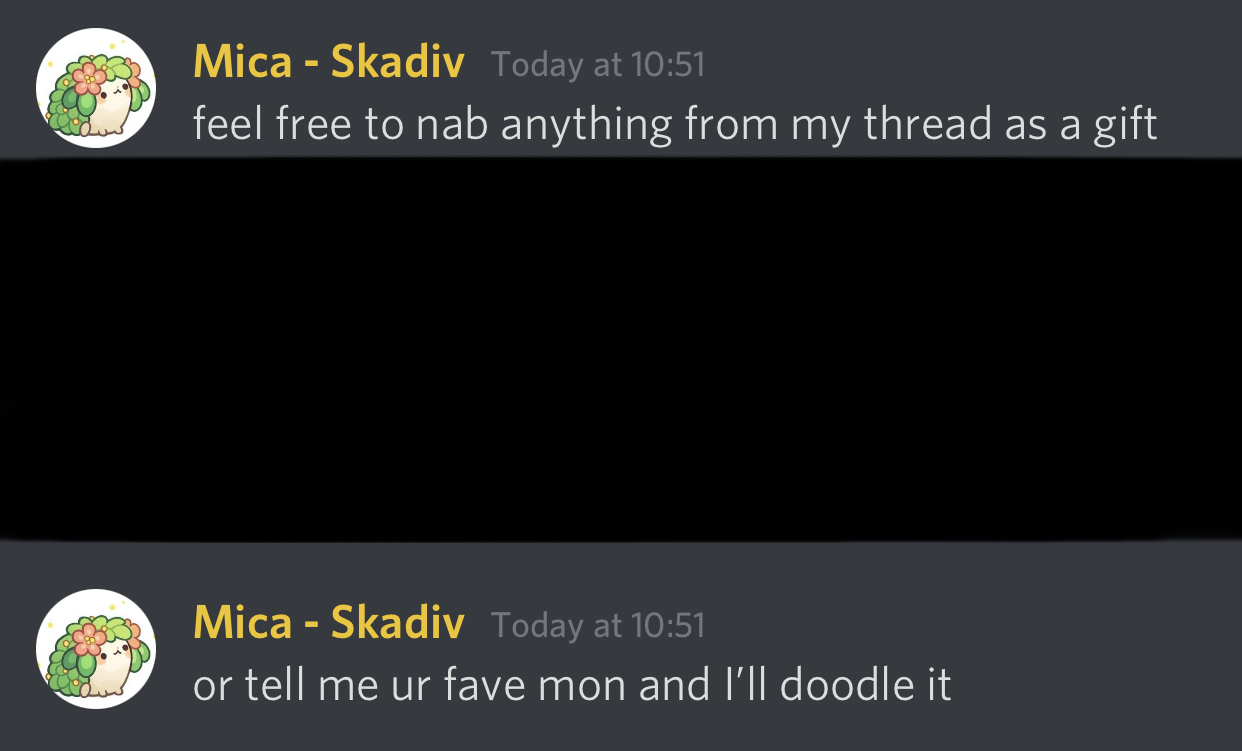 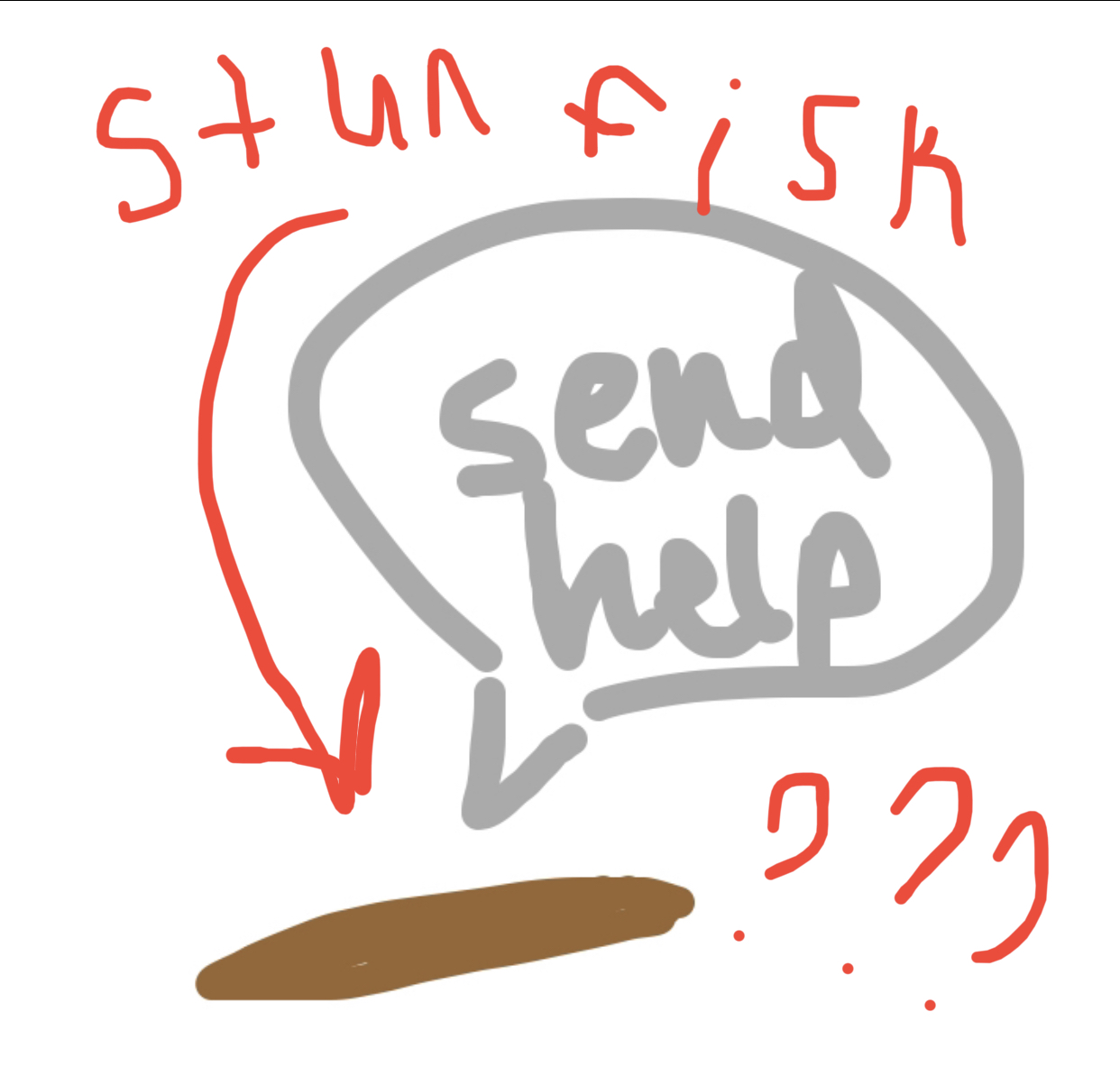 such a lovely Stunfisk ?_?

I’m glad that you liked it dear light

I’m glad that you liked it dear light

Not only was Fugaku one of JuanJo's first RNGs, he also decided to turn him into a full Ribbon Master. Juanjo's ease for picking up gamecube RNG and the amount of effort he put into this project, including learning competitive play for the Galar ranked ribbon, make this Metagross a wonderful trophy.

Fugaku was traded for a copy of Vurazir.

This little Sport Ball Gossifleur is a birthday gift from TyVip.
He was hatched by Lego, holds a Galarica Wreath and remembers buying a salad: "Leg went to a Pokémon Center with Lego to buy Salad Mix. The Pokémon definitely remembers that it got sleepy." which I love. This little flower with a funky memory sits amongst my treasured gifts. RNGd and given away by Sephi; I received this spooder as a birthday gift from Max. Optimizer after picking him from his thread.
JOLTANK has amazing art and no mercy for little splatted Spheals.

Originally RNG'd by Rain for M.O. as a thoughtful gift.

Hi hi! Thank you for your interest, I’d be happy to trade those except for the Mew. I’ll ping you in the SWF discord later today to coordinate

An addition I thought I'd never see!
Thank you Lego for the amount of effort you put into this kind gift.
-NFT-

RNG'd by Lego in Galar. A tribute to Nobara from JJK.
The markings on this Pokémon, the chiseling of cursed stone and the shadowed grin of the official art are a perfect match for her.
Warning: Jujutsu Kaisen anime spoilers ahead.

Brutal Swing and Curse allude to her attacks due to her raw arm power and the nail portrayed in Curse's animation. Destiny Bond and Payback directly reference the last episode of S1 and the nature of her abilities. Additionally, her memory is: "Nobara went to the Pokémon Center with Lego to buy TR81s. The Pokémon remembers that its feelings were complicated." which fit her as Foul Play's description is: "User turns opponent's strength against them.". Finally, the Pompous mark acts as a link to Nobara's name, which in Japanese means "Wild Rose" and to the last episode's patterned markings [Spoiler reference].
Last edited: Nov 11, 2021

Thank you Lego version 2.0
A glamorous rose deserving of its own post.
-NFT-

Vanitas is a Galar RNG by Lego, found on frame 874 million. This translates to roughly 48 hours of waiting before the seed was encountered and subsequently hit. Lego managed to finish his own RNG tool with the help of shiny finder before the frame was hit, allowing him to test it 864k frames before the encounter.
0 attack, Thorny mark and "Somewhat Vain" characteristic were the set parameters for this project. However, since Vanitas wasn't the target gender, he was given to me as the search for his sister continues.

His name means "Vanity" in Latin, a term highlighted in this Pokémon by the characteristic, synchronized nature, Thorny mark title (Pompous) and the ball of choice. Additionally, this Pokémon's memory is: "Vanitas practiced its cool pose for the move Petal Dance in a Box, wishing to be praised by Lego. The Pokémon definitely remembers that its feelings were complicated." which further adds to his character.
​
Last edited: Nov 16, 2021

Howdy! Are you still trading?
I've transferred a special-ish Giratina. Unfortunately, it isn't shiny, but it's completely untouched. (6/6/6/6/6/6 IVs/PID spells out ACE once)
Would you be interested in it? I'm looking for breedjects with a matching bank ball if you have any.