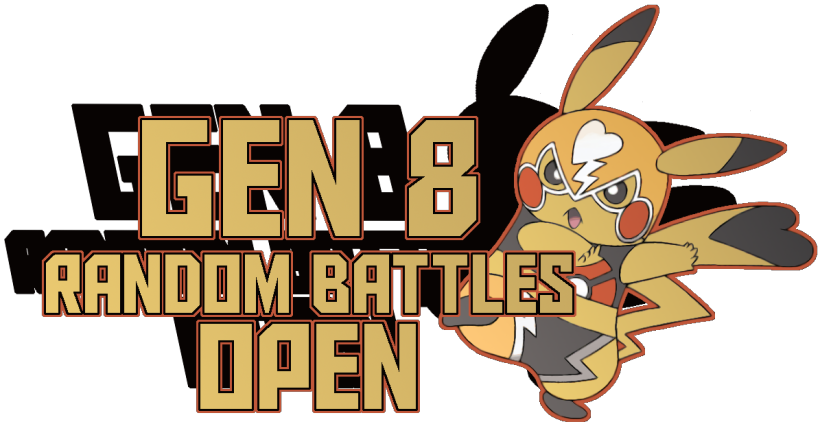 Logo by Clementine​
Welcome to the second annual Gen 8 Random Battles Open! This tournament is your chance to showcase your skills in the current generation of Random Battles in a Single Elimination best-of-3 series (best-of-5 in Quarterfinals onward).

This tournament is part of our ongoing Rands Slam II circuit. Stay tuned after this tour for news about the next one!

The winner of the Gen 8 Random Battles Open will receive the Room Prize Winner rank and a joinphrase in the Random Battles room for a month, be inducted into the Randbats Hall of Fame, and be awarded points for the Rands Slam II. The winner of the Playoff Round for Rands Slam II will get a Smogon banner for a full year, along with a month-long Room Prize Winner rank and joinphrase and a custom avatar.

1. All scheduling attempts MUST be done publicly on Smogon Walls. No other proof of communication will count for act calls regarding scheduling attempts.
2. If you participated in the Random Battles Classic Open, Gen 7 Random Battles Open, or the Hackmons Cup Open and have since changed your Smogon name, LET US KNOW in your signup post.
3. You, and I cannot stress this enough, MUST post replays of your wins. Any battles without replays will need to be replayed.

We strongly recommend familiarizing yourself with the Smogon Tournament Rules and General Guidelines, if you haven’t already. If you have further questions, don’t hesitate to contact the tour hosts, Magmar54 and myself, here on Smogon.

Timer
For the timer: The timer does not need to be on for any battle but it can be turned on by either player if one wishes.

so to clarify, my battle takes place after (Xceloh vs martinvtran) have their fight first?

GoldenBoot04 said:
so to clarify, my battle takes place after (Xceloh vs martinvtran) have their fight first?
Click to expand...

✨Let the sun warm your soul✨

requesting act, my opponent never came online ( i had waited for 1 hour past the agreed time (which they gave) and they didn't reply or come online)