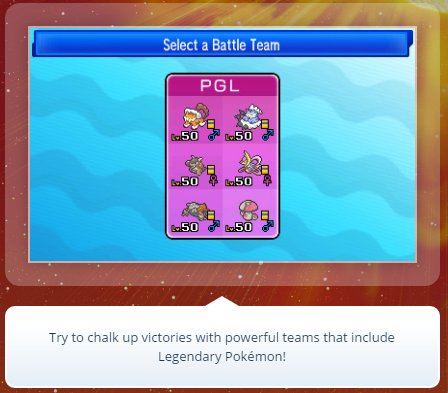 Prof. Almeida said:
Is it just me, or at the end of the Japanese trailer, the Ash-Greninja looked like he was doing a second attack, mimicking Parental Bond?

I love this game more and more.
Click to expand...

No, it's just water shuriken (the move) hits 2~5 times per turn.

Cresselia~~ said:
No, it's just water shuriken (the move) hits 2~5 times per turn.
Click to expand...

Ah thanks. Never used this move so I didn't know.

Rarycaris said:
I haven't seen this mentioned anywhere: why is it called Ash Greninja in game when Ash isn't canon?
Click to expand...

I CAN FINALLY NOT FEEL GUILTY ABOUT HAVING SIX BOXES FULL OF MONS I'M NEVER GONNA USE! Also, the level-up island is called Isle Evelup. Ha ha ha. (Isle Aphun, the item-finding one, is actually hype. Now they can actually be useful!)

Anyway, megas are sorta back, Ash-Greninja is actually a thing (though I don't anticipate it taking the metagame by storm because no Protean), and how about that chanting at the start of the first song? This is a killer soundtrack.

Ah, so that's how you're able to evolve Alolan Vulpix.

I like the news. The starter middle stages look really weird to me, though. Litten probably looks the best out of them. Good thing we already know how the final evolutions look like..

Welp, finally, mevos confirmed, as if it wasn't obvious from the beginning.

Sirya said:
Welp, finally, mevos confirmed, as if it wasn't obvious from the beginning.
Click to expand...

I never thought they would be removed. They haven't dropped a major gameplay mechanic like that

New info is coming on the 14th.

I don't think I've ever liked every member of a starter line until now (assuming leaks are real). Rowlet and Dartrix are both overflowing with personality. Dartrix in particular is great and I love it's description. It's basically taking the normal bird preening behavior and turning it up to 11. The Litten line is also awesome, but Torracat is just a bigger cat... I won't even start with Brionne.

As for Ash-Greninja: I've never understood the claim that it's not canon. The anime sucks but it's clearly a story within the Pokémon universe. Just because it may not be a part of the same Pokémon storyline as the games doesn't disqualify it as canon. Other franchises do this all the time.

As for megas and VGC implications: new megas could still be a thing. Maybe this game will be used for VGC 18 as well, but this first season they want to show off the new mechanics?

Welp, this leaks is the most satisfactory in years. The anti mega idiots got destroyed here, and on purpose they had to show Luke, Salamence and Khangaskan to do that!

Well, it seem that I will go litten since I want to use Lurantis and the new Greninja in the story.

Norne said:
Welp, this leaks is the most satisfactory in years. The anti mega idiots got destroyed here, and on purpose they had to show Luke, Salamence and Khangaskan to do that!
Click to expand...

"oh my god I showed those idiots har har har"

I expected it, I just expressed my concerns of mega evolutions just like many people, I'm not a fucking idiot for having balance hopes.

Why is Brionne getting so much hate? its a super cute pop idol seal. Love it. And the final form looks amazing as well I feel. In fact all the starters look good this gen.

It does seem that Greninja will lose Protean for Battle Bond. To make up for it, Ash-Greninja will probably get the +100BST Mega boost.

Just thought if something: The islands are basically Dream World, arent they? You can Get Pokemon to Join you and find items, and it is using Pokemon that have been deposited in a box.


Aura Flare Riolu said:
It does seem that Greninja will lose Protean for Battle Bond. To make up for it, Ash-Greninja will probably get the +100BST Mega boost.
Click to expand...

They why would people want to get it from the demo broski?

We are taking Ash-Greninja to Alola.

zferolie said:
Why is Brionne getting so much hate?
Click to expand...

Aura Flare Riolu said:
It does seem that Greninja will lose Protean for Battle Bond. To make up for it, Ash-Greninja will probably get the +100BST Mega boost.
Click to expand...

Really, REALLY disappointed that it's just a random new ability than an actual mechanic....I was really hyped for a starter bond....

But yeah it probably will be ridiculously strong for fanservice lol.

And the image is different than the Icy Rock that prolongs hail, so this all but confirms Vulpix's evolution method.

zferolie said:
Why is Brionne getting so much hate? its a super cute pop idol seal. Love it. And the final form looks amazing as well I feel. In fact all the starters look good this gen.
Click to expand...

I don't like Brionne... but it's one of the best Pokemon among those I dislike, given its animations.


Nelson Tangela said:
We are taking Ash-Greninja to Alola.

Greninja is looking for a job after getting ditched from bottling up in the Kalos finals.

There's a possibility that it could lose Torrent (Not Likely) or gain a secondary standard ability. But if they do the latter, Froakie and Frogadier will gain something random...

A girl in Pokémon XY mentions Ash directly, so I think he is very canon.

I love how triumphant the music is during the starter evo reveals; they knew this was exactly what we've been waiting for.

Dartrix looks like it's just oozing with personality, Torracat looks fantastic but Brionne looks.....off to me. Can't explain it.

Lastly, WHY IN ARCEUS' NAME THEY KEEP THE NAME "ASH-GRENINJA"?

Z-Abilities, maybe? I still don't know what to make of Ash-Greninja, even moreso now that Ash-Greninja is actually in the game. Coincidence on Ash's part? Some kind of Chosen One antics? Shameless "fan service"? "Here's who Ash would be as a Pokémon, kids! Have you're very own Ash today!" Whatever it is, Battle Bond doesn't seem like a fill-in second ability for Greninja as a pokémon, but rather like a special fourth ability, hence a z-ability. If it is, then it is very possible that other pokémon will have it, or something like it.

On the other hand, I love the concept of Poké Pelago, and the sheer utility that comes with actually filling our boxes now, beyond simply going through the game without a care, or only doing it to have a start on breeding later.

The first part of the Mega debate has finally been put to bed, now only the second part remains: Will there be new ones? If there were to be, it seems like this would have been the time to reveal one, but on the other hand, between Alola Forms, Z-Moves, Ultra Beasts, and Ash-Greninja, why not add any more? The landscape is so radical at this step that there's really no point in stopping now.

I don't know what to make of Festival Plaza, other than we need it if we want clothes. I wonder how FC fit with BP.

Finally, the mid-stage starter designs seems to fit with the leak final forms. Dartrix gives me the same snooty disposition that put me off from Prinplup and therefore Piplup for years. I really like Torracat, and it reinforces my first impression of Litten. It's really going to be a shame if they turn this good line into that...wrestler, but the bell reinforces the belt. Brionne is cute enough that she probably would have put me in Team Popplio by herself, even without the leaked Litten final.

They really need to make Brionne female dominant, it's about time that we've had a starter that isn't male dominant. I know they do it for breeding reasons, but that was always a weak argument. I mean, Ditto were literally found in the grass outside of the Day Care in Gen II, and the only times where the starters were ultimately unobtainable after evolution were the Gen I games, which was moot for genders anyway, and pre-FRLG Ruby and Sapphire, if your Treecko, Torchic, or Mudkip were male. Otherwise, it was always easy to breed them out eventually, or even just soft reset for your prefered gender. Other than that, starters have a history of being fairly poor, competitively speaking. Some have their places in the limelight, but they never get far on their own. They always need some kind of upgrade, be it their hidden ability which is, more often than not, event locked, or they need a Mega to really get anywhere. Infernape's the only one that I can think of that really got anywhere on it's own.

On that note, I wonder if they'll opt to lock Ditto out until the Bank update. A part of me kind of hopes they do.

zferolie said:
Why is Brionne getting so much hate? its a super cute pop idol seal. Love it. And the final form looks amazing as well I feel. In fact all the starters look good this gen.
Click to expand...

Because seals are cute but Brionne is an abomination of nature complete with clothing and pigtails. It's a little too Disney for my tastes (love Disney but not in my Pokémon). It even has eyelashes. They should have taken a design cue from their Piplup line designs: elegant, adorable, and Empoleon even has a "tux" but it works because it's feather patterns. Brionne is just literally wearing a ruffle dress and its pigtails seemingly have no reason to be there.