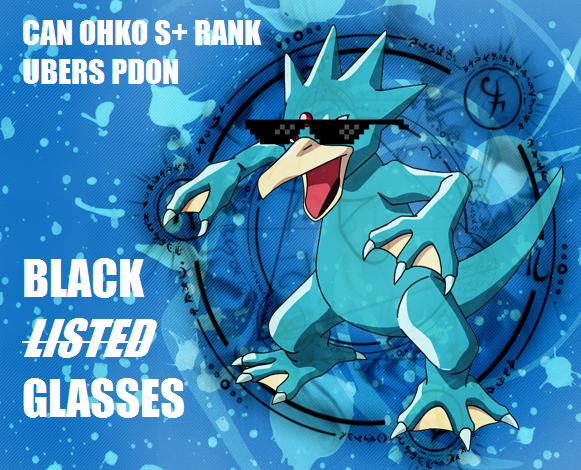 " The sunlight turned extremely harsh! I don't give a duck..."

HAAAAALOAAAAA Ubers!! Antacool here, finally back on Smogon despite the very few time I have, tons of work as I'm actually reconverting into engineering informatics and teaching maths in free time (yh I'm old today), but I have just the time to RMT a very cool but somewhat "Meme" Ubers team cause I wanted to do it since a long time, and to share a team for players who just HOPE to make Golduck working in Ubers. And yeah, and yeah, and yeah Ladies and Gentlemen Dream is True!! :D

Anyway, this is an offensive team who works quite nicely, my recent ladd was peaked at 1672 from 1450 considering I haven't the time to play atm, and I went to Top 2 a few months ago thanks to the contribution of this team in ladder rising before shining with AVrachi team.

A special team? Hard to guess. It's using Golduck, the best Pokemon you can have to take out the God of Ubers named Groudon-Primal, thanks to its Cloud Nine Ability + its STAB Water move. So OP it's a banned word in Ubers forum since a long time, as epic as the Duck is Thugly (shoutout)

Many competitive people says Golduck is a waste of a teamslot, since Rayquaza can do as well the job at hitting Pdon with a water move but Golduck has a very little niche you can exploit with: Hypnosis.

The Details of my teambuilding is bellow, ENJOY!!

Golduck is well known to be one of the few Pokemon able to hit Groudon-Primal through Desolate Land with a Water move, and is the only one with Psyduck to have the STAB on it. Obvious choice for a great meme team. A Focus Sash set is opted

Another Nikel Krom choice. Choice Scarf Zekrom is a very good offensive partner for Golduck since I'm gen 6 XY nostalgic it takes care of opposing Water types, Lugia; and key fast threats such as Shymin-Sky, Mega-Gengar and especially Darkrai who is right now a very dangerous threat in the actual Metagame. Golduck takes care in return of Pdon who is the best check to Scarf Krom

I need a Pokemon who can place Stealth Rock and who can remove entry hazards for teammates. Mold Breaker Excadrill is a great choice at doing these roles, and can also pressure even more Groudon-Primal for Zekrom, as well as dealing with most defoggers / Magic Bouncers and Deoxys-Speed leads

Curse you Ferrothorn. And omg I have nothing for Xerneas right now. ParaDancer Pdon patches up these problems thanks to Powerful STABs and great typing + Desolate Land.

Foul Play Yveltal can cause severe problems and I lack of a powerful specially offensive Sweeper, GeoXern is added

THE WHAT THE DUCK TEAM 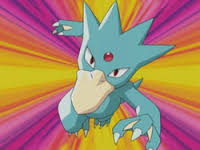 YAYAYAYAYAAAA Misty can be proud of this Pokemon. This Golduck set is yes, gimmicky, but works quite nicely haha. The idea behind this set is to rape an opposing Pdonner with STAB Hydro Pump through Desolate Land, so ANTI-LEAD it. And that's pretty nice since you can have more chances to keep Rocks off the field. You can also force Pdon to switch to place a... Hone Claws. BUT WHY running it specially offensive then???
Hone Claws brings in a very useful accuracy boost. You're also able to hit, after 1 Hone Claws, 100% Accuracy STAB Modest Hydro Pumps, or attempt an Okey 80% Accuracy Hypnosis on the incoming check. Golduck has for example a great chance to beat Ekiller with a Focus Sash intact, if Ekiller places SD and doesn't run Lum Berry. Spam in impunity Hydro Pumps, or Ice Beam on Dragons such as Giratina and Salamence (who doesn't beat Golduck thanks to Sash). The Speed investment is honestly only here for Bulky Pdon and up to 128 Speed EVs invested GeoXern, as 85 BS is quite bad.
27 SpD in for Genesect, even if this threat is rare nowadays, in order to give him a +1 boost in SpA.
Encore is an option but I like the Hone Claws accuracy boost since my luck is known to be... extremely bad sometimes. Blizzard is not a good choice since you can miss to RK MegaMence in a crucial moment. Don't run Choice Scarf neither since it's not fast enough to RK RP Don, or +1 DD Mega Salamence.

This set KOed once 4 opposing Pokemon in a battle... it's quite unpreducktable ^^

Zekrom acts as a decent Choice Scarfer and provides STAB Electric STABs to complete the offensive coverage with Golduck. He also helps a lot against Darkrai thanks to Sleep Talk, as it might be the worst threat of the team otherwise. Bolt Strike is a nuke that hits really hard Water Arceus and Primal-Kyogre, who laugh at Golduck FOR A GOOD REASON; and also Fairies and Bulky Birds such as Lugia and Skarmory. It also hit decently hard Klefki, who can't Thunder Wave Zekrom. Dragon Claw hits mainly Lati twins, Giratina, and Mega Salamence if needed. Volt Switch helps you keep momentum if you successed to take out opponent's Pdonner, but you can still opt for another coverage move, like Focus Blast for Mega-Kangaskhan and Ferrothorn, it's up to you if you're more lucky than me.

Standard Excadrill set, nothing original as you can see. Excadrill plays the role at hazards control in order to deal with Deoxys-Speed, and with more Defensive teams thanks to the ability to ignore Magic Bounce and Wonder Guard with Mold Breaker. Stealth Rock damage every Pokemon entering in the field, Rapid Spin removes pesky Hazards from Scoli, Deoxys-S, and Primal-Groudon if it doesn't want to be taken out by Golduck. Earthquake hits a bunch of Pokemon including Levitate Defoggers, and Toxic can put a timer on Ground Immuned Pokemon and those spamming Defog / Rapid Spin. Jolly Max Speed to get Speed tie with other Excas and outspeed max speed Adamant Dons.

I like this set, I mean it checks anything it wants without the job to place Stealth Rocks. The Bulk investment helps stomach threats such as GeoXerneas and Mega-Kangaskhan. Ground + Fire hit specific threats. Every Steel types including Ferrothorn, Bronzong, and Jirachi. EQ is self explained, Fire Punch deals more damage than EQ on Xerneas in order to revenge kill him with Life Orb Extreme Speed if needed, I won't like missing a Precipice Blades on this threat. Swords Dance boosts Attack to muscle through Stall oriented teams, that Golduck can't touch very much except putting a foe to sleep. That means I can have more opportunity to sweep, including this SD Don. Thunder Wave slow down fast threats and brings setup opportunities or a way for Golduck to outspeed even more things.

Lolz I lack of nicknames' inspiration but anyway, GeoXern packs a big specially offensive presence + a way to hit super effectively Dark types. Geomancy + White Herb = 2 Quiver Dances in one turn, Moonblast because AV Crawdaunt Yveltal is a threat and Moonblast is a powerful STAB that has great coverage. Focus Blast to hit Ferro and Steels though I'm thinking of using HP Fire instead. Hidden Power Rock is chosen for Ho-Oh because I have no true check, but I'm still able to hit it effectively with most of my mons.
128 EVs in Spe is to outspeed opposing most other Xerneas. 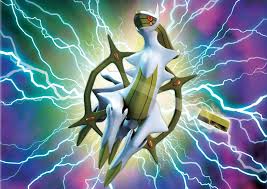 Last but not least (except the Nickname), Extreme Killer Arceus is here to Revenge Kill threats thanks to Life Orb boosted Extreme Speed. Swords Dance patches the lack of Power of a 80 base stat move, in order to sweep through many teams. Extreme Speed revenge kills Groundceus, Xerneas, Mega Kanga, Deoxys-A, and many others. Shadow Claw hits Ghost Types, a typing that none of my other teammates resist to it, offensive Giratina-O is a good example. Earthquake hits Steel and Rock types for great damage, though they are already pretty nicely dealt with my other members, but we never know.

Mega Kangaskhan is a nightmare to face with its multiple priorities in form of Fake Out and Sucker Punch. It also hits twice so can OHKO through Focus Sash with the right move. Probably the worst threat.

With only one good check to it, Xerneas is not hard to guess that's a serious offensive threat. My sashers cannot hurt him a lot once placed, depending on the sets. Bring it with Mega Gengar or haxx support and you would have a lot of chance to win.

SD Groundceus. Golduck is ironically the best response to Him lol

-Shrang for nerfing such an OP Pokemon Jk you're an awesome Room owner and meme makers :]
-Milktank 2.1, James Jimmy, Parivard, Daenys, Samqian2, Lord Outrage, PoMMan, Thugly, Henri and many others in Ubers Room for being awesome players and great friends

Very sorry for being absent so long I shouldn't ;-;
For being sorry: Mega Banette raping BP Replay
http://replay.pokemonshowdown.com/ubers-330590600

Thanks everyone for reading my RMT :D

Haha...cool team man..you don't know how much I want to find a flaw in your team but it doesnt have much xD. Though even with xerneas, foul play yveltal and support pdon can fuck you up pretty well with rocks up(if excadrill fails to rapid spin), also support or even offensive ghost ceus can be a issue for you. That's all
Best of luck :o)
I just love it when somebody builds teams well around uncommon mons lol.
You must log in or register to reply here.
Share:
Reddit Pinterest Tumblr WhatsApp Email Link