Umbreon Dan said:
also Here's what I love about Google+ in general and the Google+ Diet in particular:

Instead of saying, "I'm going to write a blog post now," or "I'm going to send an e-mail" or "I think I'll tweet something" you simply say what you have to say, then decide who you're going to say it to.

If you address it to "Public," it's a blog post.

If you address it to "Your Circles" it's a tweet.

If you address it to your "My Customers" Circle it's a business newsletter.

If you address it to a single person, it can be a letter to your mother.

I'd say this is pretty revolutionary. *snip*
Click to expand...

You can do everything listed there with facebook. There's the notes application, which you can make public so that it's like a blog post, or more privately so that only your friends or some of your friends can see it.

You can send facebook messages to anyone, as well, so those can be like a business newsletter, an email sent out to all your friends, or a letter to your mother.


tl;dr:
Sooooo pretty much the only advantage google+ actually has over facebook is the ability to group video chat. Otherwise, they're on equal ground, and FB comes up ahead for me because that's where the vast majority of my friends are.

The ability to very easily choose the audience of your posts is what makes it so nice though. With a very simple choice of circles, which facebook does not make so intuitive, you can direct your posts to the people that need to see it. If you have a business on the side, your customer circle can be used to post business related things with no crossover. The fact that it is so simple and intuitive is what makes it attractive. I know that there are certain people in my life that I want to keep separate. I like having all my coworkers and bosses on my social network, but I really don't want to mix them up with my friends from college. The ease that it provides, the nice minimalist interface (think the new chat bar on facebook), being able to migrate your pics from facebook over, and the opportunity to make pretty neat scripts and extensions to customize your experience make G+ a really awesome choice.

i woke up in a new bugatti You make a business group in your friend list, or family in my case There's no way Google+ will be a huge success. Unless Facebook dies like Myspace, or FB starts charging for its use. So until then.. it's more of a.. "why bother" type of deal.

i don't know guys, facebook is doing its very best to piss me off lately. the new chat is awful and i'm not sure how they thought they were making things easier.

You make a business group in your friend list, or family in my case

the same thing on google+: 'send'

Circles are just lists with a better name. That's all it is.

Well, on facebook you can either show all your stuff on your wall to a group or none of it, this gives you more flexibility

Actually, that's not true-- you can include or exclude specific people from seeing specific posts on fb, as well. It's all part of the custom privacy settings that Phantasia screenshotted.

Lanturn314 said:
Actually, that's not true-- you can include or exclude specific people from seeing specific posts on fb, as well. It's all part of the custom privacy settings that Phantasia screenshotted.
Click to expand...

you cant use a decrement operator on a boolean

Justin8649 said:
you cant use a decrement operator on a boolean
Click to expand...

Lanturn314 said:
Actually, that's not true-- you can include or exclude specific people from seeing specific posts on fb, as well. It's all part of the custom privacy settings that Phantasia screenshotted.
Click to expand...

I was always under the assumption that when you changed the permissions for a post you're about to make it applied it to your entire wall so I never bothered.

Can someone hook me up with an invite?

i woke up in a new bugatti

Just about every time there's a Google+ v. Facebook case, it comes down to:

"Google+ has X which Facebook doesn't have", then someone (if present) shows that FB does actually have X function, and G+ goes all like "Oh"

I think it's because people are more willing to explore a new thing rather than an old one. Maybe because you feel accustomed to it and feel you know everything about it. I got really giddy when I found the Privacy Options in FB 'cuz I was bored. Gotta do some research.

edit: I'm not some sort of FB zealot or anything, but in G+ I don't see anything or much that FB doesn't already offer (or will offer: see video hangouts). I also don't want to have to friend everyone I know again, or have to find X Facebook function in G+.

I think it is also because facebook is really unintuitive to use. It's actually pretty awfully designed.

Have a nice day.

Google plus doesn't have a lot of the retarded spam that finds it's way through face book (and I always laugh that somebody is retarded enough to paste some random java script into their address bar), but maybe that's a highschool dialema.
Regardless I think facebook is pretty dumb anyways.

Hipmonlee said:
I think it is also because facebook is really unintuitive to use. It's actually pretty awfully designed.

Wasn't built from the ground up to incorporate these features. That's the one advantage I saw to google plus, ease of use thanks to better initial design.

I also genuinely believe that facebook has one of the worst design teams of anything ever. Not for any reason in particular besides that their updates always strike me as change for the sake of change with no improvement to functionality. And they update shit so often. And the trial periods for updates are really fucking retarded. It just fills floods facebook with "Oh god new facebook layout is awful" twice, instead of just once. They never change anything after having the option of the two different modes [currently going on with chat (or not anymore, but it was a couple of days ago I'm nearly certain)], it's just prolonging the inevitable.

I found this pretty neat little article on the differences between facebook and google+.

The first main difference is in the emphasis within the product and the ease of use. Facebook's Friend Lists functionality is currently de-emphasized in the Facebook product (it's hard to find and manage, even if you know it exists), whereas Google+'s Circles are at the core of the product experience (they are the first thing you see and are very easy and fun to create).

The other difference is the ability to explicitly indicate to friends how broadly is the particular piece of information or content being shared. If one shares something with the "Family" Friend List or "Best Friends" Friend List on Facebook, the users in the friend list have no way of knowing that this content was shared only with their small select group rather than with all of the users' friends. In Google+, users can easily see who the content was shared with (it's either "Public" or there's a "Limited" button one can click right next to the content item). Knowing who a particular piece of content or information is shared with and feeling part of the select small group it was shared with, may facilitate more interaction and in-depth responses.

Finally, Google+ offers an "Incoming" stream, where one can see the content of folks who have added you to their Circles, but whom you haven't added back. There's no explicit analogue of that in Facebook.
Click to expand... 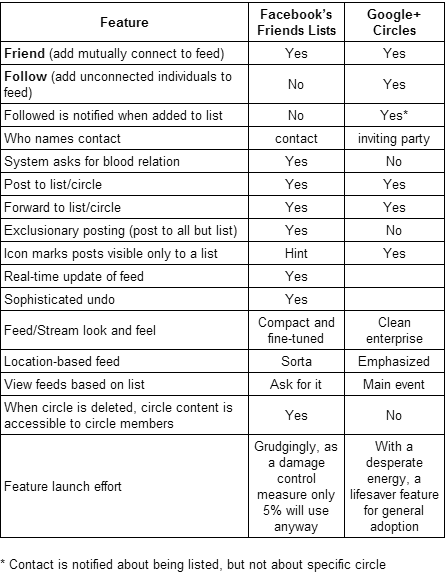