How did you create your username?

It is the logo for one of the albums by the band AFI. I only recently discovered that it also refers to Azumarril :P

I was wondering the internetz looking for info on the new DP coming out, discovered Serebii, and enjoyed it very much as a long time "in the dark" pokemon fan. I then discoverd the forums, thought "wow, they have these for pokemon??", then decided to create an account. Now FFVII is one of my favorite games off all time (which explains my avatar), and since Cloud seemed pretty gay, I remembered I made an addicitinggames account. Now when I had made the account the name Chocobo was already taken, which I used for all my net gaming sites as an alias (for when they asked for a high score name). So I used GoldChocobo. Which made me decide on the name. GoldChocobo. Which has stuck pretty nicely. Which, until recently I stayed with Serebii, but once Reno left it died down considerably, so I joined Smogon, and checked it every one in awhile when I felt like rating, but there is nothing on Serebii. (Thanks for reading my story, haha).

My username was origianally going to be Justinawesome, but that proved to be too long, so I just shortened it to Justinawe. Now I am kind of glad I did, although I still have people making puns and what not about it, thinking Just in Awe. In reality it is just my first name with and "awe" afterwards. xD

My face makes people faint. That includes me, which is why I can't look in a mirror for more than 3 seconds.

Destiny100.
I liked destiny because I'm still debating whether you make your destiny or if someone choses it for you.
Most other forums it's Dark Destiny but this was the first name I could of when destiny was taken XD. Pretty lame I know. I'll get it changed soon ;)

happiness is such hard work

Because Chris is me, of course.

I always used to use the name ccool2ax over the internet. When I was 7 I wanted to sign up for some AOL Game thing or whatever for kids. So I thought, hmm, I'm chris, and I'm cool, so I'll use ccool. There already was one, so I went with ccool2. Because I'm twice as good. Then I registered for AIM with ccool2a, then I wanted a full blown AOL account but ccool2a was taken so I had to use ccool2ax, and that stuck.

At that point, I was 12 or 13 or so, so I really hated telling people on Wikipedia that my username was "ccool2ax" in person, or trying to tell people my email in person was really dumb. One of the Wikipedia users Danny had an alt called Dannyisme that he used for Office Actions, and since Chris was taken, I decided to become Chris is me to match that.

From there, I've pretty much used Chris is me since, including on Smogon. I'm not terribly obsessed with myself or whatever, I just thought it was clever. I've considered changing it to Pontus or CIM, but I don't really want to.

I just clicked and filled it in. Duh!

Okay, that's it for the annoying answer, now it's time for the real origin of my nickname. KrakenNLD

The "NLD" part is... no, it isn't from "Non-verbal learning disabilities"! It arrives from my country, which "Officially assigned code element" is NLD for The Netherlands.

Next up is the "Kraken" part, it can mean different things. It can mean the giant squid that draws down everything beneath sea-level. But I've heard some origins of that it was a Dutch word as well, some I thought: "that's fun that it can also mean that" while with others it was just a coincidence and I found out later. For instance, the Dutch word for "Squatting" is "Kraken", another example is that it can be a form of sound. It can also apply in chemistry, is that the Dutch word for "Cracking" is... you guessed it... "Kraken".

So my name can mean lots of things :). Esspecially if you are from The Netherlands :P.


Edit: Ow btw, you wanna know what "Cartilage" is in Dutch? It's "Kraakbeen".

Back in the days when I joined my first forum, I had to think fast...
Something cool! Something catchy!
Unfortunately, all I came up with was the name "K.O. Kreator".
And that name sucks. Seriously.
But, for a while it stuck, and, to tell the truth, it became a part of my identity.
However, I drifted from the forum scene, and the post count stood still.
Until, one day, I stoke up the courage to join a new forum, which I cannot remember. But the KO bit stuck... and so a classic pun was born!
HasbeenKOed, someone who is not only behind the trend, but also relatively unconcious! Genius!
These days I find it too much of a mouthful to use liberally, so I often shorten to simple ol' KOed.
But someone on Smogon took it.
So here is HasbeenKOed, and if you read this far, I reward you with a thouroughly unfufilling conclusion...
...
Bye.

I tend to obsess over certain things. For example, I was overly obsessed with Neon Genesis Evangelion for several weeks. That is why I originally chose the name Nerv (along with an Evangelion avatar). For some reason I got back into YUGIOH, and was planning on changing my name to something related to the game. Of course, I know that I will move on to something eventually which would warrant another name change. I decided to change my name to "Obsessed" because of my habit. Now I only need to change my avatar to show what I am currently obsessed with.

Well I read a digimon fanfic called Blood and Binary, and my favorite character's online name was something Kaiser. I loved the name and donned the same cloak. I love element of darkness so since then I became the Dark Kaiser.

< is the result of my large ego , thinking im good at pking (player killing) in mmorpgs but i suck so i just lurk at random forums etc you will find me almost anywhere on the net , yet im not a troll just a pro lurker :P

I wanted to make a clever rhyme for my name. All of a sudden, my older sister barges in the room and says "WHY DOES THE BATHROOM SMELL SO FUNKY?! ITS STANKS!" I of course, was laughing my ass off, and told her I had too many beans for dinner. (Though I didn't even have beans ;))

Anywho, it reminded me of Stunky. Then I was like, holy shit, that rhymes with Funky!


So now I am The Funky Stunky.

Ravelle´s one of the many aliases and Identity of the main character from my favorite book series, The Lies Of Locke Lamora.
So loving the character and it´s alias I decided to use it online.

Massive Dynamic is a company from Fringe, a TV show on Fox (in America). Some people bash the show for the "bad acting from main characters" and others for "being just another X-Files knock-off", but I still like it! (:

I just happen to like how the name sounds.

Original username: DemonEye or DemonEyes
-similar to my username in another forum

current username: D~MonsterR
-combining my nickname with the nickname of a character from my fav manga

My original one is endamaster, which was originally a play on Eian (is) The Master. I didnt not notice end a master in it, so that how most people saw it. And it stuck with me that way.

The original one I had (txrdriftking) was related to a certian videogame that has never been that popular, and probably will never be.
My current is after one of my favorite bands, Boston. The name is from one of the albums they released.

Ralts/Kirlia/Gardevoir reminds me of emotion and drama. So my name is EmoKirlia because EmotionKirlia just doesn't sound right, and Kirlia is one of my favorite Pokemon.

as surprising as it may seem, my name is Elmo irl.
thus, "The Real Elmo"

My username is derived from (read as: a copy of) the instrumental 'Soothsayer' by Buckethead. It still remains one of my favourite pieces of music ever.

This past Halloween i got a lot of Bazooka Joe bubble gum, so i thought the named sounded cool and used it when i joined up.

1) The character Dark Mousy from D.N. Angel (Which was one of the first animes I've ever seen). Here is a picture: 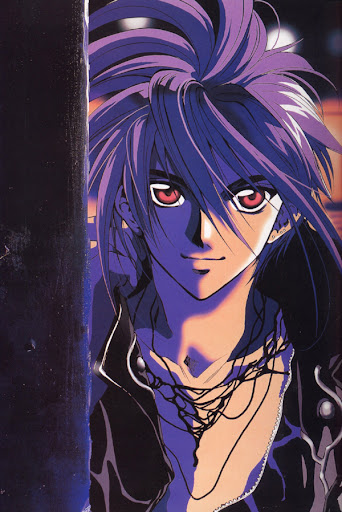 2) People think I'm evil, and what is better than 'Darkness' to represent evilness? Well, Darkness is too long, so let's shorten it to 'Dark'

And Lynx, well, when I first had to change my nickname, I was playing Chrono Trigger, then I've discovered there was a 'sequel', Chrono Cross, I started playing and on the first scene with Harle and Lynx appeared (in the castle), I tought to myself: Holy crap, this dude is FREAKING AWESOME.

And there we have it:
Dark + Lynx = DarkLynx.

So yeah ;) By the way, I'm not really evil, but people insists that I look evil. It's funny, because most of my girlfriend colleagues from college don't even talk to her when I'm with her .-.' lol