Gather 'round kids, Pink is finally doing an RMT of the team he's used for literally a year, passed to just about the entire OU room (S/O to OU room), and got to 1800 with it alone.

This started out from a request to build Mega Gyarados hyper offense around the time USUM came out. I thought to build pure Hyper Offense with inbuilt stallbreakers to broaden its beneficial matchups, and this team is what came about. It has been viewed, critiqued, and generally praised by players much better than I am.

Standard sash-boom Landorus-T, and go-to lead, barring specific situations (See: Gyarados) Stealth Rock is mandatory on the set, but I set them up less than one would imagine (unless the situation demands it, i.e. a Volcarona, Charizard, etc, or a solid opportunity to get rocks up presents itself) in favor of deleting or at least chunking whoever they lead with. This team generally ends battles very quickly; usually within 20-30 turns, win or lose. Therefore I find putting the opponent down one mon to be beneficial over rocks in many situations. Many a Greninja, Keldeo, and other fast special mons have been baited into ice beam/etc-ing this boi and getting deleted. Swords Dance over Rock Tomb is an option for if you want to break bulkier leads, but Rock Tomb's Speed drop does wonders for fast leads that come in on Landorus-T, and can give you ways to play around said fast leads to ideally set up Stealth Rock and delete a mon.

Stallbreaker Extraordinaire. This is the mon I originally built the team around, as I mentioned in the intro. I was asked by a friend to make Mega Gyarados Hyper Offense, and an early version of this team is what came about. (this mon is most of the reason that the team has minimal trouble with stall) On that note, Gyarados is my go-to lead against stall teams, as many will lead with Mega Sableye, who Gyarados hard counters. By Mega Evolving, you become immune to Sableye's Prankster if it chooses to hold Mega and try to Will O Wisp you, and Taunts through Mega Sableye's Magic Guard. I also lead Gyarados against Araquanid variants of Sticky Web teams, as Gyarados outspeeds and taunts Araquanid to force it out, giving me opportunities to deny my opponent their Sticky Web. You may find yourself wondering, "Why does this Gyarados only have 224+ Speed?" Well, in the words of Ske Mask The Slump God, I thought the number looked cool. Also, 224+ Speed outsruns Heatran at 0, Mega Lopunny and modest Mega Alakazam at +1. (Note: Max Speed Gyarados doesn't outrun Timid Mega Alakazam at +1, anyway) If I ever find that base 80's bother me (Mamoswine, Hoopa-U, etc), switching to max Speed is an easy fix. Grass type hole in its coverage is known, but I generally use other mons to take care of the Tapu Bulus and Tangrowths of the world (See: Blacephalon, Hawlucha, even Tapu Lele in a pinch), as EQ's coverage outside of that is very desireable (hits Toxapex, Heatran, Magnezone, Rotom-Wash, and any other Levitate mon after it Mega Evolves, plus many more). This is also a great mon to teach you when to delay Mega Evolving. Early game, Intimidate is absolutely invaluable. Therefore, I only Mega Evolve if I need Mega Gyarados' higher Attack, greater bulk, typing, or Mold Breaker.

Wallbreaker/Hole Puncher #1. I find many mons "resistant" to Tapu Lele's Psychic type stabs still take massive damage because of Choice Specs and Psychic Terrain, hence the lack of Hidden Power Fire. Psyshock is mainly for Chansey and other special walls and tanks. Also keeps terrain up for fairly self evident reasons I will nonetheless explain later.

The mon that has pulled me out of the fire more times then even Hawlucha has. So many games on the brink of defeat were saved because of this little leafy boi here. Set is self explanitory. Smart Strike is used for more neutral coverage options, plus it hits Mega Pinsir harder, someone walled by the Knock Off set. Knock Off remains a viable option for utility, but Smart Strike fits better here as an offensive mon and cleaner. Defog is for if hazards get out of hand (In rough order of the priority of which I will clear hazards out: Sticky Web, Reflect/Light Screen/Aurora Veil, multiple Spikes/Toxic Spikes layers, and if I find that the match is going to require a lot of switching, Stealth Rock), and is handy since Kartana has a penchant for scaring many mons out. Choice Scarf guarantees a jump on most of the faster threats in the meta (barring opposing Hawlucha, faster scarfers, Kingdra in rain, etc). Also has surprising physical bulk, as it has a fairly solid chance of tanking, for example, a +3 Sucker Punch from Bisharp.
+3 252+ Atk Bisharp Sucker Punch vs. 4 HP / 0 Def Kartana: 241-285 (92.6 - 109.6%) -- 56.3% chance to OHKO

The obligatory Hawlucha on a team with terrain. I try not to rely on it too much anymore and use it more as its name suggests, as a reset button to a match going sour. 132 Speed outruns Smogon spread Hawluchas, as well as Sand Rush Excadrill. ( *hipster glasses on* I was running 124 when the analysis spread was 96 Speed, when suddenly that spread became the new thing, so I had to speed creep) Stone Edge is used over Roost for Zapdos, and, in a pinch, Tapu Koko; though ideally those threats are removed before Hawlucha comes in. Special Defense boost from Psychic Seed is a godsend in helping it set up. Tapu Lele / Hawlucha is a much rarer core than Tapu Koko / Hawlucha, in my experience; so people aren't as familiar with what it can and can't tank with the Psychic Seed boost.

My little Destroyer of Worlds, and Hole Puncher #2. Flawed as Blacephalon is, I love him to death. This set is one I came up with and have seen very little of in favor of the more pedestrian (and Smogon standard) Substitute / Calm Mind, Speed Boosting Blacephalon. This set is used over that one for a couple of reasons: Firstly, it was the set I came up with when Blacephalon came out, after trying a couple of different ideas to boost its speed (like Firium Z + Sunny Day for the option to use Z-Sunny Day, or Inferno Overdrive, which would be nice if Blacephalon wasn't made of particularly damp toilet paper and could take a hit to set sun up). Secondly, The Substitute + Calm Mind set is more focused on stallbreaking while this is moreso a wallbreaker. My stallbreaking on this team is covered by Mega Gyarados. This set allows it to not only wallbreak, but sweep very reliably after clearing out threats or just getting a Flame Charge kill. Naive is used over Timid nature, along with putting the 4 remaining EV's in Attack, to squeeze every little bit of extra damage out of Flame Charge. (Also, with Blacephalon's horrid bulk, it's not going to be tanking many attacks regardless of a few points in Defense/Special Defense) Ideally, getting a kill with Flame Charge on a weakened mon is the best way to set up a Blacephalon sweep, as that basically gives it a special Dragon Dance and outspeeds most of the meta (barring everything I mentioned for Choice Scarf Kartana, as well as Scarf Kartana itself, and Scarf Keldeo) Hidden Power Ground is used for sneaking damage on Heatrans who come in to sponge hits, as well as being able to hit Tyranitar with SOMETHING, and doing decent damage to Toxapex. Psyshock is another option that I used for a long time, but using the moveslot solely for Toxapex seemed excessive. As for the obvious question of Chansey, Psyshock hits it marginally harder in terrain than Fire Blast does, but it's still nothing spectacular.

​
Out of Context Accolades for This Team: 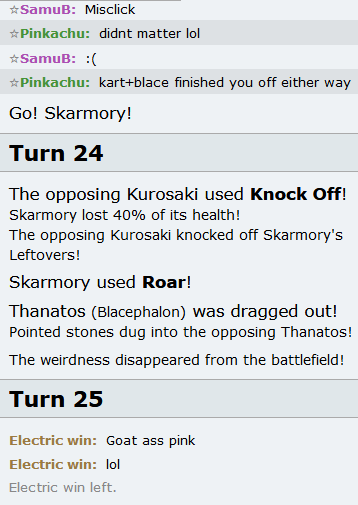 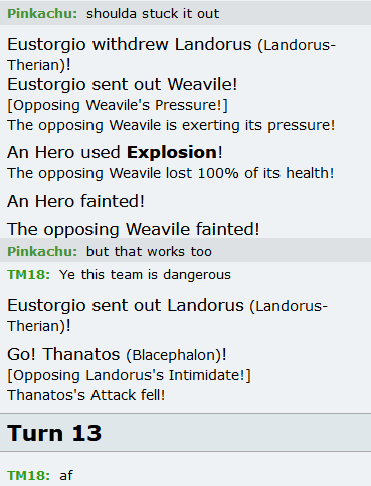 Below are replays of the team in various ladder, tournament, and private matches. If you decide to use the team and have a match worth showcasing, post it in the comments and I will view it. If I deem it a good showing of the team, be it by good fundamentals, smart plays, or beating a team you or it struggle with, I will post it in this folder under a special header, along with your name. Please specify whether you want your Smogon username or Pokemon Showdown username to be the one featured (if they differ).

NOTE: Some of these replays might feature older sets and/or spreads. They are perfectly usable, but the team as seen above is the most recent version and what I've deemed best as of yet.

This team would be alot better if you didn’t make it, but It is pretty fun to play.

Also, what do you do against fairy types like Clefable?
Last edited: Dec 27, 2018

This team looks really nice and like we managed to see, it has a really high offensive potential, but there are few flaws.
I suggest you to use ExcaLead over Lando-T for two simply reasons: Better MU against Tapu Koko and Rapid Spin since you have two mons weak to stealth rocks.

Excadrill @ Focus Sash
Ability: Mold Breaker
EVs: 252 Atk / 4 Def / 252 Spe
Jolly Nature
- Stealth Rock
- Earthquake
- Rock Tomb
- Rapid Spin
I suggest Substitute>Taunt on Gyarados since you can setup with it against such threats as Heatran and Toxapex
Smart Strike over Knock Off or Defog since fairies are literally everywhere.
The Blacephalon set is really interesting, too bad it's extremely based on Psychic Terrain, so be careful against other tapus.

SW1FTCL0NE said:
This team would be alot better if you didn’t make it, but It is pretty fun to play.

Clef can't do much against a specs psychic

My changes to the team.

My changes to the team.

1. Psyshock helps lele break special walls it otherwise couldn't touch, namely chansey. Jirachi ends up being a problem for lele alone, sure, but I have other things to deal with it, namely: gyarados, blace, landot. Verdict: Wouldn't recommend.
2. Sub works if you don't like scald burns and don't mind whirlwind/haze. Would like it more with some kind of passive recovery. Verdict: Sure, go ahead.
3. Poison jab doesn't outdamage acrobatics against Lele, one of the mons I know you want to answer with it. Only fairy it outdamages against acro/stone edge is Koko, and +0 pjab doesn't even kill 0hp koko after rocks,, so if you fear koko more than you do zapdos, I can understand but don't agree.
252+ Atk Hawlucha Poison Jab vs. 0 HP / 0 Def Tapu Lele: 192-228 (68.3 - 81.1%) -- guaranteed 2HKO after Stealth Rock
252+ Atk Hawlucha Acrobatics (110 BP) vs. 0 HP / 0 Def Tapu Lele: 198-234 (70.4 - 83.2%) -- guaranteed 2HKO after Stealth Rock
252+ Atk Hawlucha Poison Jab vs. 248 HP / 0 Def Tapu Koko: 174-206 (50.7 - 60%) -- guaranteed 2HKO after Stealth Rock
Verdict: Understand, considered it myself, don't recommend after calcs.
4. Defog on kart is meant to be a curveball and option to clear webs off the field even past the speed drop. If your only hazard clearer is excadrill, a sash mon meant to take a hit to set rocks, it can leave you stupidly vulnerable by anyone else in the back setting hazards. Verdict: Keep defog, if you want smart strike that bad, put it over knock off. Also, if all you have is rapid spin, screenzveil teams fuck your shit up.
5. I haven't tested Exca on this team, but if you were to follow my above advice and keep defog alongside its spin, then I could see it working. Verdict: Go ahead, just don't use it as your sole hazard clearance.
6. I like and use Blace for its snowball potential, something ZCeleTini doesn't have. It's a strong mon, sure, but I just personally prefer blace here. Maybe if you knew how to use it.....
Verdict: Fuck it sure.
You must log in or register to reply here.
Share:
Reddit Pinterest Tumblr WhatsApp Email Link