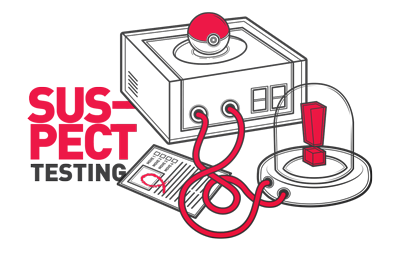 The Mix and Mega council has voted to suspect Zapdos-Galar. Zapdos-Galar has seen usage even prior to the ban of Urshifu-Rapid-Strike, but after its ban, its stocks have skyrocketed. Flying / Fighting type coverage is essentially unresisted in the metagame, but Zapdos-Galar was blessed with a multitude of other tools to work with. At base 100 speed, it's relatively fast, typically outrunning everything on a team that's not speed control, and with Metagrossite, it can even outpace the likes of Solgaleo. Pre-Mega Defiant allows it to badly punish intimidate, whether it's from a Manectite Mew or a pre-mega Landorus-T. With Thundurus Kick, it rarely has to predict, as even if they go out to a fighting resist you likely still KO with a Brave Bird when they're at -1 Def. As if that weren't enough, Zapdos-G also comes with U-turn to allow it to get momentum on the few things that do check it, like defensive Zapdos; thanks to its high attack and Tough Claws, even this pivoting tends to hurt. Defensively, Zapdos-G is rather less potent, but it can still freely come in on Ground-type attacks, and its bulk is good enough that neutral attackers like Barraskewda need some chip to revenge kill it.

However, Zapdos-G is not without its flaws. While it's a powerful breaker, Mix and Mega has no shortage of those, and compared with other options like Kartana, who sports a variety of helpful resistances and a blazing fast speed tier, Zapdos-G can sometimes come up short. Zeraora and Barraskewda both give it competition as a pivoting fighting type, as each of them outspeed Zapdos and offer their own utility. Zapdos-G also has some opportunity cost, as it can't be run alongside normal Zapdos and its stones do have other users. Defensively, Pokemon like Ho-Oh, Slowbro, Magearna, Zapdos, and Solgaleo can give Zapdos-G trouble, as do rarer picks like Toxapex and Tapu Koko. And against offensive teams, Zapdos' lack of reliable resistances mean it can have a tough time coming in safely to do its job.

With this in mind, it's up for the community to determine how to weather this storm. Eligible Mix and Mega voters will decide whether or not Zapdos-Galar will continue to be allowed to hold mega stones.

Requirements can be achieved by getting 80 GXE with 30 games, down to 76 GXE with 50 games on the Mix and Mega ladder. In order to participate in the suspect, you must create a fresh alt (creation date no earlier than 26 July 2022) with the prefix MGZ at the start of the name. When you have obtained the reqs, make sure to post proof of your alt's record (generally a screenshot) in this thread, and if you wish to do so, you can also share your thoughts on the test here.

Voting:
Once the suspect period is over, everyone who has obtained reqs will be tagged. The post will then outline a process of blind voting, which will be clarified once the time arrives. For now, follow the above "Requirements" subheading to ensure that you have posted your reqs correctly. You must post on this thread in order to be tagged in the voting thread, however you do not need to include your vote on this thread.

A super-majority of 60% ban votes is required for Zapdos-Galar to be banned from the metagame.

TL;DR:
- Zapdos-Galar is allowed on the ladder during the suspect test
- The GXE requirement is 80 and the minimum game count is 30, down to a minimum of 76 after 50 games
- You must ladder on a newly-created alt using the prefix MGZ
- You must post your reqs in this thread, though the voting process will happen in a separate thread. You are not required to state your vote in this thread.
- The suspect test will conclude at 11:59pm GMT +0 (7:59pm EDT) on Tuesday, August 9th.
- A ban vote of 60% is required to remove Zapdos-Galar from the metagame.

I don't really think that gapdos is broken ngl

I wish it was a 30-0, but very good tier, it was a pleasure testing it! s/o UT and Instruct for the emotional support

quite confused with this meta's banlist & priorities in general tbh

e: think work pointing out that Solg is stronger, has way better bulk, about same speed, doesn't get revenged by -Ate, has recovery, and extreme versatility in the sets it can run.. Also despite what the post intro said, Zapdos gets outsped by a lot of the offensive threats in the meta. But it gets uturn, i guess..
Last edited: Jul 29, 2022

gzap is fine this was just a test to see opinions im p sure (or qt is still bad, likely the latter 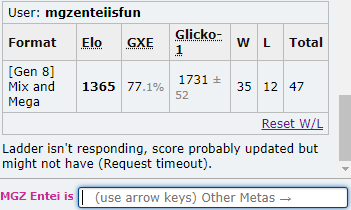 Divinity in the making

I mentioned this in the OM cord already, strong fighting types are never going away in MnM especially when Blissey is one of the best and widely used mons in the meta. If Gapdos gets banned, the next fighting types will rise to take its place and there are already alternative fightings being used like Buzzwole and Barraskewda each with their respective niches. I don't see this ban changing the meta in any major ways and I also think the prior ban for a pivot fighting type in Pheromosa was very strange and out of left field considering that mon was barely used to begin with and predictably, we saw no major changes in the meta to reflect that quickban. All this to say I think the council is possibly a bit fixated on pivot fighting types right now because these mons have the ability to tear apart some balances so well. I think any contributors to making Blissey harder to use is a positive one and it clearly didn't stop people in OMPL from spamming Blissey all the time.

I will say I am a bit on the fence about this suspect because Gapdos truly is very difficult to switch in on. So as a balanced-minded builder it doesn't sit well with me when a mon is extremely difficult to check in the builder. With that said, MnM has been very offensive for a while now and this means a mon with an exploitable defensive typing is going to be less formidable in application than it is on paper and I think we have seen that result very clearly for a time now. The ability to dance around multiple brutal offensive threats has been a central aspect of Gen 8 MnM since the dawn of DLC 2 and with or without Gapdos present I do not see that changing. With those things in mind, and Gapdo's struggle with 1v1ing opposing offensive threats and thus struggling quite a bit vs offense, I would vote do not ban at the moment.


The more Solgaleo is explored in MnM, the more alarm bells start to ring for me. Metagrossite was already one of the most splashable mons in MnM with an amazing speed tier, coverage, and bulk. Aerodactylite still shares some of the Metagrossite qualities but sacrifices the speed control for outstanding breaking power and is extremely hard to switch into. Those two sets were difficult enough on their own before the bulky CM sets started being developed. Bulky CM Venusuarite is a lategame nightmare that has the ability to 6-0 some teams from preview. Milotic was traditionally able to handle bulky setup but is hit too hard with +1 Tbolt to be able to check Solgaleo. This is the story of these bulky cm sets for me. It gets too powerful and specially bulky in one or two turns for assumed checks and counters to be able to handle it anymore. The only Ground-types with the offensive firepower to overwhelm Solgaleo don't have longevity so if Solgaleo attacks once or twice when they hard in they're already in a really hard spot. The only Ghost-type that is realistically used in MnM right now is Lunala and it isn't calm mind, it will lose 1v1 to Solgaleo after burning its power herb. If it's calm mind, it doesn't have longevity either so it falls victim to the same cycles as offensive ground types.

Compare the traditional Tough Claws stone sets and the bulky setup stone sets and you start to get into some really difficult mindgames when an unmega'd Solgaleo comes out. If Lunala is the main means of handling CM sets, it needs to come in right away or it will be too late to damage Solgaleo enough to beat it 1v1 after it CMs a few times. But if it's a tough claws stone, you have the pleasure of coming in on a Sunsteel Strike and then potentially dying to the following Sunsteel Strike or definitely dying to a Crunch. If you have a Hippowdon as a Solgaleo counter and hard that in assuming it's one of the tough claws stones and it starts CMing up, you probably lose. The inherent nature of a mon that has potent physically offensive and specially offensive sets that perform in two very diverse ways means the means of playing and building around that mon are going to be difficult and frustrating. I think we have learned throughout this generation of MnM that when bulky setup mons are very strong like the Sablenite Mew meta, misery follows and I think we should keep a close eye on Solgaleo especially if CM sets start picking up and causing consistent issues in games. 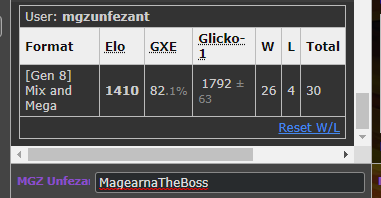 confirming, thanks Clastia for making me run into my own team 9 times, that was fun

confirming as mgz i omor

thoughts on things and stuff:
Gapdos really doesnt feel that broken in game, it's strong sure, but it's sometimes hard to know what to click and often it just sits in the back because of its mediocre speed tier.
The more important thing, in my opinion is the ladder, a lot of the games were close to won on MU against no mega/1 mega/mzard mchomp mscizor teams which makes it really hard to notice whether a mon is broken in practise or is it just a theoretical builder thing. Obviously strong, fastish breaker kills those teams but does that push gapdos over the edge? Not sure.
Shoutouts to Clastia for the team uwu >-<
and saba pp is already used for something, use pfp instead smh

Confirming as Some Thug
GXE is based

the unsuspecting victim of darkness in the valley