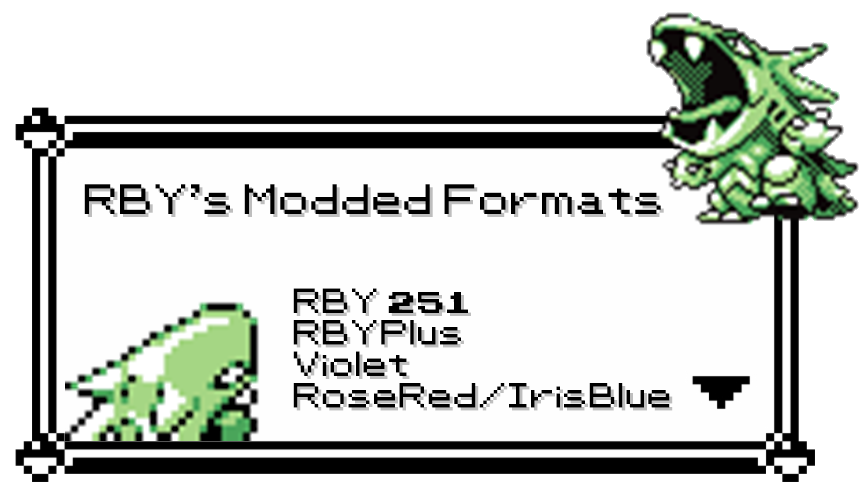 All of these formats are playable on rby.psim.us, the RBY PS Server!​
So you may or may not know of Beelzemon 2003's Gen 1 Side Formats thread. Given the radical differences between these formats compared to the rulesets he's used, as well as mechanical changes across the board, I went and started this thread instead. All in all, this thread aims to document Pokemon Showdown mods for RBY, how to play them, and what they all do.

Starting off with something quite un-RBY, we have RBY 251. Originally conceived by Crystal_, this was a mod for Pokemon Online produced way back in 2013. From what I know, it had fairly decent success and was played well into 2015, even on Pokemon Perfect, before the platform began to die out in favour of PS. I took it upon myself to port this mod to a Pokemon Showdown format and made it available on RBY 2k20's PS Server.

As the name implies, the mod adds the Johto Pokemon to an RBY environment, taking Special Stats from their SpA, SpD, or averaging them out for balance. Feraligatr and Shuckle had some particular changes to stats as well. The learnsets are essentially their Gen 2 Level-up Learnsets + a selection of TMs picked for the format. Some signature moves, such as Heracross's Megahorn, also make an appearance. I'm sure your brain is darting around imagining the horrors of Blissey, and you would be right, that's kind of how it plays out. You can even put this Smog article into context!

One important distinction is that since the mod is no longer limited by how PO stores the data for RBY Pokemon, I didn't have to remove NFEs to make room!

Important Links
This mod was, unfortunately, not very well-documented. There's no comprehensive info spreadsheet, nor many resources. As such, this is the best I have.

A recent mod created by Petuuuhhh, RBY 898 does similar things to RBY 251. The Dark, Steel and Fairy types are added alongside a Dark-type Bite, and every Pokemon from the later generations are added. Tradeback moves - NYPC ones, specifically - are also allowed. If the Pokemon gets a Gen 1 move at any point, it gets it here. This buffs Gen 1 learnsets a good deal as well, as a result. Unlike RBY 251, there is no TM/HM system, and Special stats use the highest of the two stats for later-gen Pokemon.

This leads to a pretty offensive metagame, with Amnesia and Swords Dance sweepers becoming particularly potent. Regice ended up being banned pretty early on due to its Amnesia access and incredible bulk, for example, as Fighting-type moves aren't very widespread. There are also some interesting strategies available, like Wrap Xurkitree and Nihilego. Generally, though, the Kanto Pokemon are pretty heavily powercreeped, with only Snorlax really seeing play as of now.

Important Links
Resources are not very widespread for this mod, but there are a few good ones you can use until better ones drop;

RBYPlus (sometimes called RBY+) was also originally a Pokemon Online mod, though it was ported to Pokemon Showdown around 2017. I believe WaterWizard and the general RBY 2k10 community collaborated to make it, and it was kind of the flagship OM on the forum. It's been made pretty well-available by Enigami, being usable on the RBYPlus and Pokemon Perfect PS Servers before they died out. As with all the mods here, it's available on the RBY PS Server now.

This mod aimed to make every fully-evolved Pokemon viable in OU, usually in some pretty creative ways. This involves things like Normal/Ghost Lickitung, Fearow with ridiculous bulk and more. They also changed a lot of the moves, making Explosion variants among other things. I want to believe this was the first one to make such radical RBY changes, but I'm not 100% sure.

Since RBYPlus was made available again, one of the creators has returned to support the mod, aiming to make a successor to it.

Important Links
RBYPlus is among the most well-documented PS mods I've ever seen, though it was mostly on RBY 2k10. However, some dedicated members of the forum archived the pages for a lot of the resources, so through WayBack Machine a lot of the content can still be accessed. Analyses for the Pokemon were written, but unfortunately, it doesn't appear that any actually survived. There is this old Battle Log from Water Wizard though!

Violet is a PS Mod that's made its rounds on the Pet Mod forums here, produced by lilyhollow. The mod originally had its own PS Server with RBYPlus also making an appearance. It's was adopted by RBY 2k20 as the "flagship" OM, in a similar fashion to RBYPlus before. It has since been added to the RBY PS Server.

Unlike your traditional RBY, this mod utilizes Team Preview, removes some frustrating mechanics (Recover failure, x/256s, etc) modernizes the type chart and takes a conservative route to balance. Many Pokemon are outright removed, as if there isn't an explicit reason to include it, well, it's unnecessary. Mew is also unbanned through nerfs. Many moves are changed with the express purpose of improving the Pokemon that learn them, and then stats are buffed accordingly. It's really interesting, and many of the move changes add a ton of depth, such as Dream Eater being completely reworked and Haze acting as a pseudo-Refresh that restores HP. Many RBY players like this one, from what I know.

Important Links
While the Pet Mod thread is usually enough, RBY 2k20 has supported the mod quite heavily. It also found support on Pokemon Perfect after its addition.

Another stab took at balancing RBY in the Pet Mod forum, RRIB was made by KuraiTenshi26 with a more liberal approach to balancing compared to Violet. Unbanning Mewtwo through nerfs and even having an expanded format to add later-gen Pokemon, this mod is kind of nuts.

Similar to Violet, this mod adds Team Preview, modernizes the type chart and removes some of the frustrating mechanics. The balancing approach makes the metagame more akin to later generations, being more centred around type synergy. However, the typical old paralysis spreading and such remains a fantastic strategy. It also superbuffed a bunch of moves with the aim of giving STAB to more Pokemon, such as turning Razor Wind into a kind of Air Cutter-like move and turning Hyper Fang into Draco Meteor. With moves having power akin to later generations, it's a much faster metagame overall. With later gen Pokemon like Breloom around too, the format as a whole is very unique.

Important Links
RRIB found support on RBY 2k20, giving it a Strategy Pokedex like Violet's. It's probably one of the more accessible formats overall, as unlike all the others it has its own dedicated client.

This is a Pet Mod that was run with the intention of recreating the entire Pokedex. While it seemingly didn't finish, Petuuuhhh, the creator, saw it transition to Gen 8's NatDex AG with more tweaks. Pokemon are similar to the originals in that they have the same BST and similar STAB movepools, only they're made with RBY and its mechanics in mind. It's found a home on the RBY PS Server.

Moderator
I've added RBY 898 to the OP, which recently launched on the RBY 2k20 PS Server. It's a fairly interesting one for sure.

awaiting "not racist" certification from faint

Moderator
It would've made more sense to give Shuckle its special defense stat as special, then exclude it from learning any special moves at all (including Hidden Power ). That way you retain the gimmick plus it's a fun troll to have the highest special in the game but no moves to abuse it with.

Petuuuhhh said:
Made unofficial viability rankings for RBY 898 as well as some sample sets
feel free to discuss here or in the rby Discord in #modded-metagames
Click to expand...

it occured to me today that paraspread + fire spin volcarona is a great way to win games in rby 898; too much so? Might be a cause for a quickban.
typical volca set:
Volcarona
Ability: none
- Amnesia
- Fire Blast
- Psychic
- Fire Spin
you can amnesia to speed up the process and minimize your miss chance. regardless, with volcarona running around, it makes garchomp even more prominent, as its speed tier is higher, it gets rock slide, it's a fire resist, and it's immune to twave. which brings me to wanting to suspect chomp. it has a great matchup vs most of the metagame. once it sets up, it's hard to stop.
Garchomp
Ability: none
- Earthquake
- Rock Slide
- Hyper Beam
- Swords Dance
Last edited: Mar 26, 2021
You must log in or register to reply here.
Share:
Reddit Pinterest Tumblr WhatsApp Email Link