Hey! Forgive me if this has been discussed previously or if it is outside the scope of this subforum. Also forgive me since this suggestion is proooobabbbllly a little more involved than a simple change. But it's just a shower thought I'd figure I'd share.

I have been seeing a lot of discussion lately about Smogon's withering tournament scene and how tournaments are not seeing a lot of sign-ups, especially the big honcho official tournaments. This seems contradictory in a way because it seems Pokemon Showdown has been seeing steady growth. It seems especially odd when you think of events like last year's LC Open, which ended up being the biggest tournament in terms of sign-ups at the time, spurred on because Freezai pushed it so hard on his Youtube channel. That should reveal that there is some interest in competitive tournaments on Smogon; even if many of those new players came just for the meme of it, or had not intention on staying, it certainly shows there is plenty of room for growth. Not to mention other smogon-orientated YouTubers who have been absolutely popping off in terms of watch-time/subscriber count, like blunder, whose Smogon profile page has become one of the best places to get started in competitive Pokemon just for the fact there are so many team dumps there.

My activity levels on Smogon come and go for sure, so take my perspective with a grain of salt, sure, but it seems that Smogon does not have a player problem- it just needs some more marketing! I would bet that a fair portion of the current Pokemon Showdown userbase doesn't even know what SPL is- and if they do- they probably aren't up to date on the tournament circuit or timeline. PS and Smogon have a good symbiotic relationship, but it's clear the pipeline of players is from Showdwon to Smogon, and while I know there are links to the forums on PS itself; but forums can naturally be a bit hostile to new users. Ultimately, I think we could increase traffic to the forums and to the tournament sign-up/discussion pages if we give a little more visibility to the happens of the tour community on Showdown itself.

I know we have a "news" tab but it only holds around 2 pieces of info and includes happenings beyond just tournaments. Consider this really epic and beautiful mock-up I made: 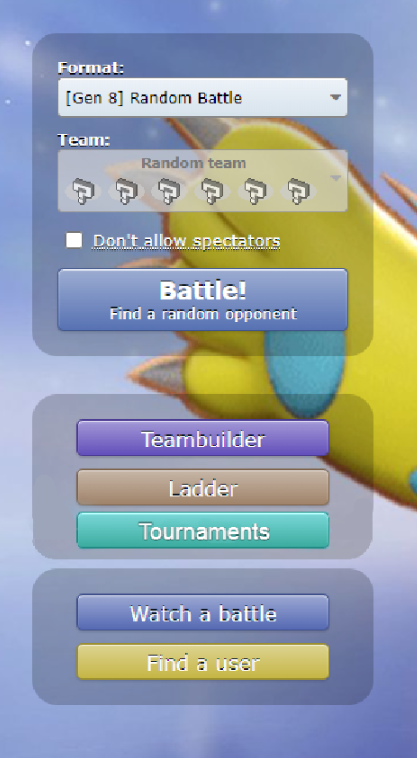 I know that PS has its own built-in tournaments, so that wording might not be ideal, but the general idea is a hub for official smogon tournaments. It could open a link to a page, like the teambuilder, that has information about whatever tournaments might be happening.

Further consider this epic mock-up i made in 5 minutes: 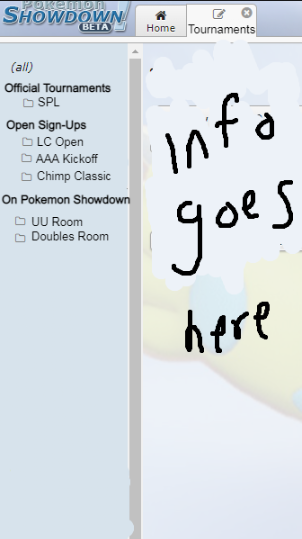 In regards to SPL, for example, you could have each team's roster and standings on display, as well as replay links posted as they happen. For other tours, give some space for a bracket that players can periodically check in to! Maybe even links to official Smogon Social Media posts. The 'Open Sign-Ups' page is just there to show you could advertise smaller tournaments that are seeking sign-ups, and they can just link to their respective smogon thread (understandably not every tournament hosted on this site can get the same visibility treatment, but just having sign-ups in a permeant, high-viz place can go a long way, maybe they can be simply updated with new threads as the tournament progresses? An 'in progress' section?) And then a section for tournaments that are being running through various chatrooms; I know there is Chat Room for this already but so maybe not but maybe its cleaner?

I know that this would be asking a lot, since it requires a level of manpower that we might not have; but I think it could help in some respects by giving more visibility to Smogon tournaments on the main Showdown page. I know I'd be happy to help with whatever.

Again- apologies if this is something that's been discussed before of its out of the bounds of what is acceptable on this forum!!!! Love you all. Kiss kiss.

PS Admin
This is in part a duplicate of https://www.smogon.com/forums/threads/tours.3710635/. But its a much more detailed and thought out duplicate, so I won't remove it. I'm noting here that the general concept is Approved but details need to be worked out before I change the thread tag to that to signal devs they can work on it.

To carry over my thoughts from before, logistical questions exist concerning what exactly to display and how to update it. If its just what tournaments are ongoing/have signups open thats not too difficult to just have trusted community members (TDs, staff) update smogon events and PS room tours can be automated easily. If were also including things like standings for the bigger events it becomes trickier, perhaps just link back to the standings page on smogon for that info?

For smaller unofficial tournaments, I'm not opposed to displaying those that have been approved by the TD team (using the existing system), but I don't want to allow literally anyone to put events not hosted on smogon forums there as that adds a ton of overhead moderation work and policies.

It would also probably be wise to automate the updating of these events as much as possible eg: when making the event list the time signups close and an end date (event is no longer displayed).
Last edited: Dec 3, 2022

We face the heat as we are fighting until the dawn

I'm working on this. Sorting out some design/UX stuff first.

We face the heat as we are fighting until the dawn

This is largely done - I added the server end for this, accessible with the command /smogtours. I'll add the homepage button in a few days, once we're sure it's stable.