​
You should only post in this thread if you meet the requirements to vote on Slowking-Galar. Those are:
You should post a screenshot that confirms your alt has met these requirements and that you own it. If your image is big, please make sure to use a hide tag.

Do not post incomplete or falsified requirements. If you do, you will be infracted.

s/o to the homie adem for the teams

confirming as nduugk no ban 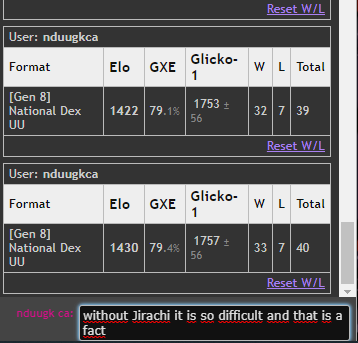 i used this https://pokepast.es/74361f634b1a59bc
is literally the same team that everyone is using, the only changes are Salamence-> Bisharp (priority is very important) and Mew-> G Moltres to not lose to Mew in every battle.

confirming as nduugk trollface
thanks adem for the team 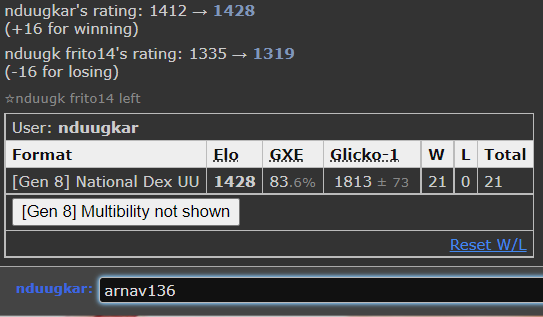 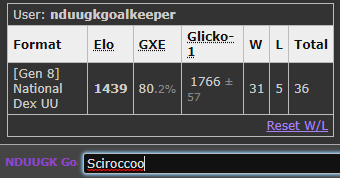 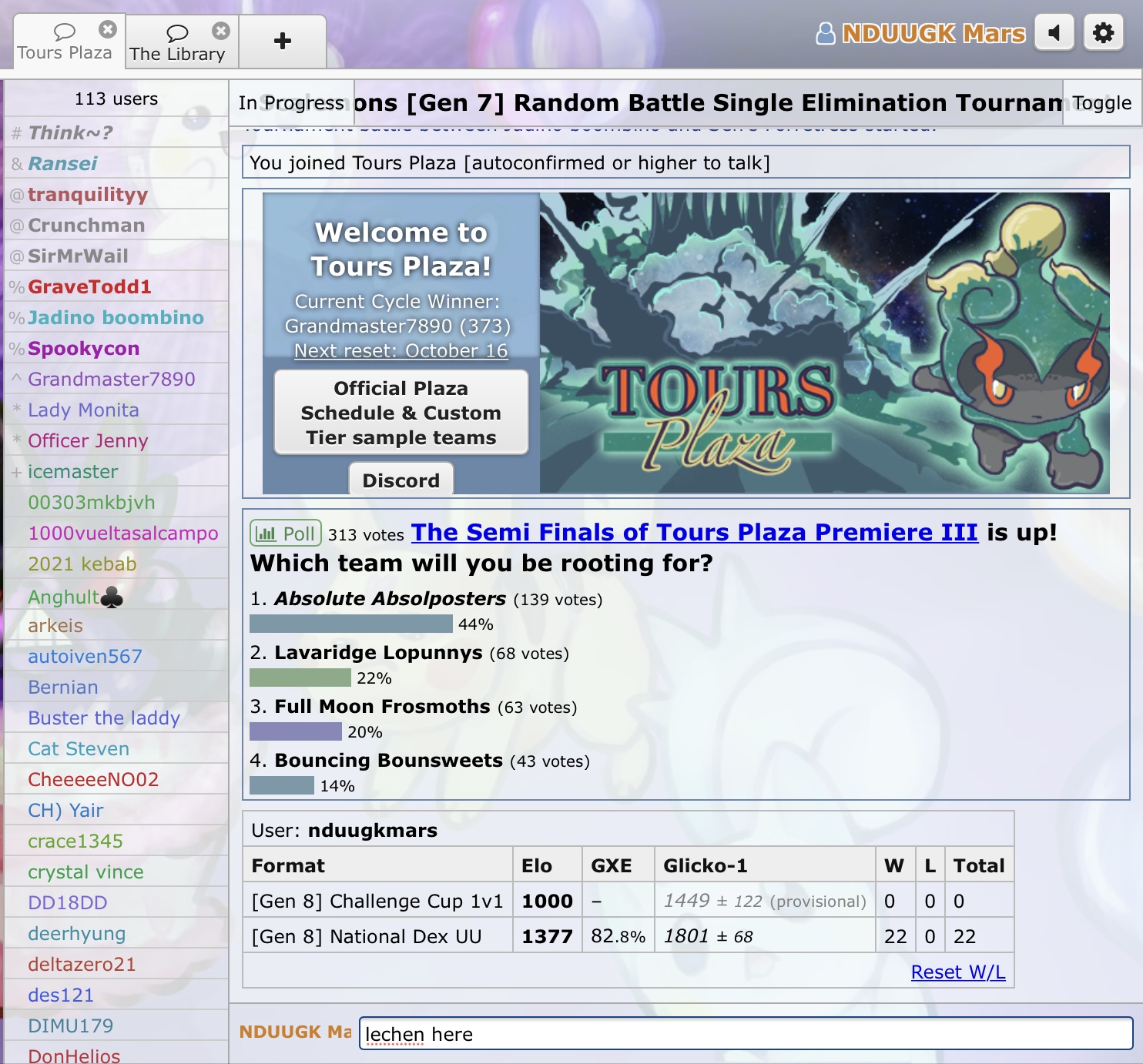 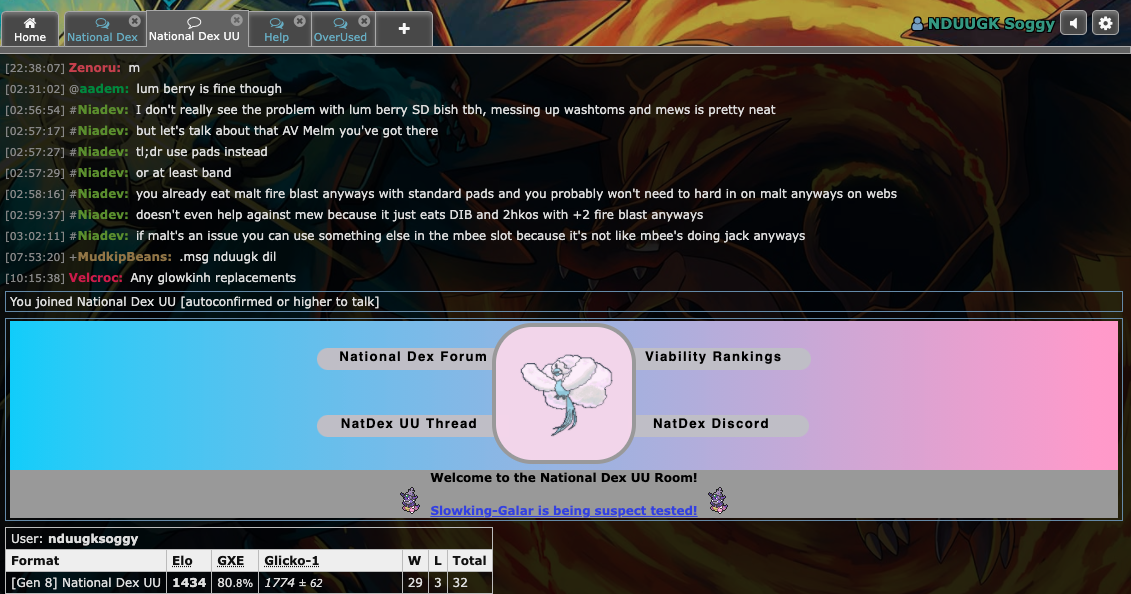 get this shit OUT of here. mew next tho

confirming as NDUUGK please. i dont like this tier ngl also thanks adem and beans for letting me steal your teams

have experienced true pain by playing this ladder willingly

s/o pdt for the team

I'm dropping the team I used most in this suspect test. I think hyper-offense is definitely the best playstyle right now to consistently farm wins on the ladder. This is because the tier is filled with so many hard-hitters that can be used to their full potential behind screens since the lower ladder is generally overwhelmed with such offensive capacity.

The idea is to get Krookodile in immediately to set up Stealth Rock and potentially block slower opponents’ hazards too. Then, use your discretion to see if Krookodile can be sacked or if it needs to be preserved to deal with certain Pokémon late-game. Regieleki can come in once to get up both screens and suicide, sending in one of the 4 attackers to start setting up and sweeping.

Shout out to SSJRobbieRotten for helping me build the team

MY THOUGHTS ON THE KING

Slowking-Galar is definitely a menace in NatDex UU. The most common Slowking set I ran into was Assault Vest; this set is extremely easy to use and is very efficient in brainlessly blocking whatever special attacks come from the opponent. Slowking has an amazing defensive typing that makes it immune to Toxic, becoming almost impossible to whittle down by weaker special attackers. Slowking can switch in and out of the battle freely to soak hits and force switches, potentially luring in physical breakers and punishing them with Future Sight. AV Slowking is definitely the superior special wall in this tier, being able to deny common special attackers like Moltres, Primarina, Rotom, Keldeo, Mega-Manectric, Nihilego, Hatterene, Sylveon and Toxtricity.

Though it is still very effective, the problem with this set is that it is generally very passive, and can only dent teams by Future Sight luring, poisoning with Sludge Bomb, burning with Scald or hitting Pokémon on their weaknesses. Slowking is very prone to Pursuit trapping, strong special Dark and Ground moves, being gradually worn down with Spikes and Stealth Rock, and strong super-effective physical hits. In this case, it makes Slowking like a weaker Chansey, but is definitely still an S-tier Pokémon in NatDex UU.

I think the most problematic set is definitely Calm Mind, which warrants it to be ban-worthy. In the early/mid-game Slowking reserves its role as a special sponge that can deter common switch-ins like Krookodile, Melmetal, Aegislash, Steelix and Bisharp with a burn from Scald. In the late-game, once Ground/Dark-type attackers and strong physical attacking Pokémon have been knocked out or weakened with Scald burns, Slowking can become unstoppable as it starts setting up Calm Mind. Late-game special sweepers like Slowking are commonly paired with a Z-move to dish out a very strong attack on a Pokémon that it struggles to knock out normally, like opposing Slowking and all Steel-types barring Empoleon.

The Future Sight + strong attack core can be very overwhelming in this tier as well. Slowking can use Future Sight and then switch into strong physical attackers like Melmetal, Aegislash, Scizor, Urshifu and Buzzwole to lure out opposing defensive walls like Moltres, Skarmory, Amoonguss, Hippowdown, Rotom-Wash, Tangrowth and Gastrodon, where they will not appreciate a 120 BP special move. Hence, this creates bad situations where you are forced to choose a Pokémon to lose: either tanking the physical hit and dying to Future Sight or straight up sacking whatever is on the field so Future Sight fails and you can get a clean switch-in.

When I was laddering with a balanced team, the only way that I could overcome the late-game Calm Mind Slowking was to knock out the opponent’s Defogger, then start spamming Spikes and forcing switches. I then preserved a strong Slowking check like Krookodile or Moltres-G as well as switching around to dodge Hydro Vortex. In conclusion, I think Slowking is definitely a centralising Pokémon that makes you sit up and be on high alert the entire battle.
Last edited: Oct 13, 2021

s/o to adem and MudkipBeans for the teams