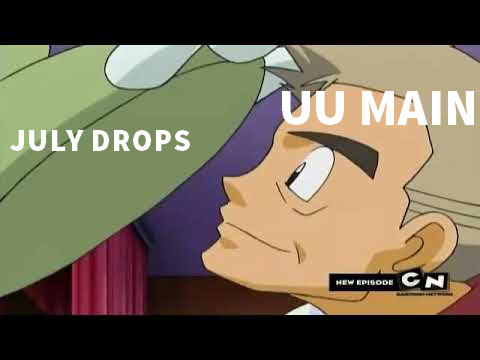 Well I picked an interesting time to get back into uu.

I’m interested in trying out Kyurem + Spikes. I can see it applying a lot of pressure to bulkier teams while still having the bulk and power to take out something on more offensive teams.

I can also see Choice Band Aegislash being really cool, although Incineroar is a pretty good switch in to it. Aegislash does learn toxic though, so I can see sub toxic being a pretty good set.

I’m excited to play around with all of these drops.

Conk is back motherfuckers

I think people are sleeping on Jirachi. The last time it was in UU it was very oppressive. But then again, Umbreon wasn't as prominent as it is now, however it(Umbreon that is) counts as an easy switch in for terrakion, Conkeldurr, and Hera. I don't know how broke kyurem is, because Blissey exists. As for Aegislash, there seems to be quite a few answers, in theory

I know the tier looks like a madhouse now, so we're gonna add more fuel to the fire! In all seriousness, Hogg and I have been discussing that with the drops for this month, that the tier is practically going to feel like UU Beta again. As such the UU Council held a vote to give certain mons a trial run during this chaotic metagame for the upcoming period of time. We are exploring the UUBL Pokemon and giving them what is essentially a test; we'll free them for a period of time and then have another council vote to determine if they're still banworthy or not, while also voting for any potentially broken drops that just entered the tier for the first time.

I know a lot of peoples first thoughts when seeing the drops are "when ban", but we want to explore the possibility that the, so to speak, "power level" of UU could simply just go up with these drops, and make some UUBL Pokemon be okay for the tier again. This is not a sure thing nor are we committed to dropping anything, but we want to ensure that we're exploring the possibility. We realize this may not be an ideal solution, but we believe the best time to explore these drops are while the tier is at its most powerful, not after we have a wave of bans. There is no perfect solution to tiering with DLC happening; it's going to mess up our tier a lot, and there's nothing we can do about it. We simply are looking to handling things the best way we can. I'd like to explore the possibility of having the fewest bans possible, which is what this is striving to achieve. If these Pokemon end up being broken as sin, as they very easily could be, then they'll just get banned again in the coming days.

One last thing I'd like to reiterate before getting into it: this is a vote to test the Pokemon down. We are not voting here to permanently unban the Pokemon. If the UU Council reaches a majority on a Pokemon here, it will be released and we will hold a vote once we deem it necessary in the coming days, alongside any potentially broken Pokemon that just dropped. Again, this is not a vote to permanently free it. Onto the votes!

With this, Crawdaunt, Gengar, and Obstagoon will be LEGAL IN UU, at least for the time being. Tagging Marty and The Immortal, if you could make the change on PS as soon as possible it would be greatly appreciated! If you're curious as to the reasoning for why these Pokemon were banned in the first place, check out this post.

The metagame has developed a lot since these three were initially banned; in fact, it's been six and a half months since they were banned. We have a lot of new Pokemon, a lot of new top threats, and a lot of metagame changes that could potentially lessen these three's impact on the tier. I won't be writing an in depth reasoning for each as to why things may change, when I will regardless of the outcome in the coming days when they are voted on again, but I will write something brief. The metagame has gotten significantly more offensive than it was at the time these three were banned; balance as a playstyle is questionable, the tier is faster and stronger than it was before. Crawdaunt's breaking prowess is unmatched, but with the tier contentiously getting faster and stronger, it faces competition and cannot break like it used to. Incineroar, Blissey, and Porygon2 now are legal and top tier Pokemon, making Gengar's Ghost-type STAB far less insane than it was when it was banned. The speed Obstagoon has is no longer a premier speed tier thanks to things like Cobalion and Keldeo dropping. All of these are potential reasonings as to why these Pokemon may not be as broken as they once were, but we'll find out about that in the coming days.

This tier is going to be chaotic for a while. Weighing the difference between acting too fast and waiting too long is something we'll have to figure out, but we do intend to take action and fix any issue this tier may have. For now, enjoy the madhouse with all of these drops, and these three unbans!

THE GOON IS FINALLY FREE AGAIN​

Moderator
Id honestly free all of the BLs and start fresh. I know it sounds cancerous, but with UU getting over 100 Pokemon available including several Pokemon we had no plans on getting (looking at Aegislash and Terrakion here), we are basically at stage 1 again, and as such I think just freeing everything at once is the play. UU is already borderline bonkers rn, might as well go all in and define our BL list post DLC.

broken arrows in the dark

Moderator
WAIT THEY ACTUALLY DID WHAT I ASKED.

Looks like my identity as the secret Shadow Board Head of UU's Tiering Council has been revealed.

That being said, trash Gengar and cuck Goon really gonna step in the same tier as CrawGod? 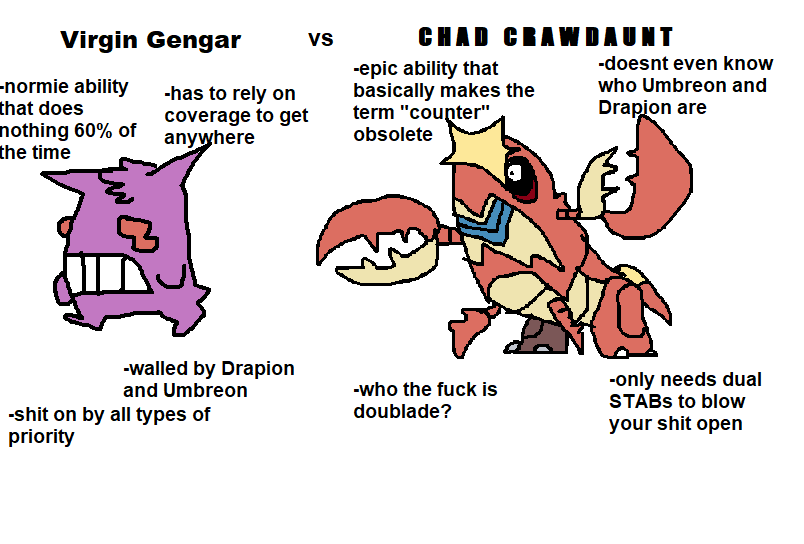 The goon is back I’m crying tears of joy

In all seriousness I think it’ll be fine, the power level going up means goon won’t be as threatening as it once was. In addition, 95 speed isn’t that fast anymore and it can be shit on by stuff like conk, terrakion, cobailon, keldeo, machamp, and pangoro. I feel UU will be It’s home

e: also fuck grimmsnarl and all of his friends and family
Last edited: Jul 1, 2020

Seucra Lockhart said:
I support the addition to the chaos(I genuinely don't understand why gyrados is too good for UU though)
Click to expand...

With the additions of screen setters like grimmsnarl and Klefki, gyarados can get lots of solid opportunities to get in a dragon dance and begin snowballing from there. Also, it’s water+ground+grass coverage allows it to beat its “checks” like milotic and rotom wash.

Can we free Primarina and Venusaur while we're at it?

at this point, unban everything please.

Yeah low-key if we’re gonna get chaotic we might as well go all the way...

G-Luke said:
Id honestly free all of the BLs and start fresh. I know it sounds cancerous, but with UU getting over 100 Pokemon available including several Pokemon we had no plans on getting (looking at Aegislash and Terrakion here), we are basically at stage 1 again, and as such I think just freeing everything at once is the play. UU is already borderline bonkers rn, might as well go all in and define our BL list post DLC.
Click to expand...

Yeah, I agree with unbanning everything. The power level of the tier just went up, so examining all the banned mons is something that should be done.

And unban Drizzle and Baton Pass while you're at it

MaahirMomtaz12 said:
And unban Drizzle and Baton Pass while you're at it
Click to expand...

Oh god i hope you're joking about unbanning bp...

Everyone talking about the Goon, Gengar and Crawdaunt..... but WHERE IS MY BOY DURANT? 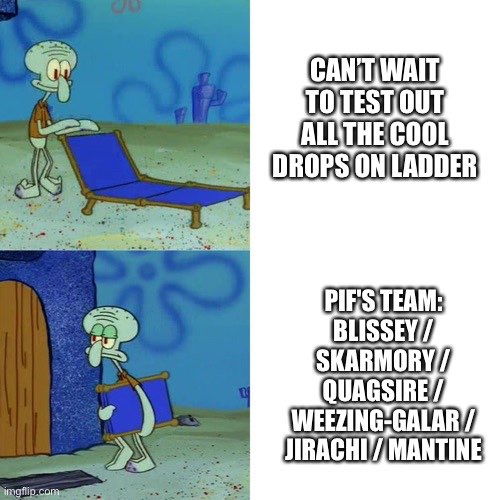 Moderator
Alright, we've had a couple of pages of fun now, but from here on try to make sure your posts are constructive and more than just one-liners, as per standard rules!

Also, council votes for UUBL unbans have already happened; there may be more votes to unban things later, but unbanning more things probably isn't their top priority at the moment. Give the tier some time to settle, and give the council some time to figure out how to assist that settling process. Try to focus on what's here now and how that impacts the metagame.
You must log in or register to reply here.
Share:
Reddit Pinterest Tumblr WhatsApp Email Link

Users Who Are Viewing This Thread (Users: 2, Guests: 4)