Quagsire @ Leftovers
Ability: Unaware
EVs: 252 HP / 252 Def / 4 SpD
Relaxed Nature
- Earthquake
- Recover
- Scald
- Toxic
Are you tired of terrorizing poor OU players with your generic bulky offense with toad, ferro and miscellaneous offensive mons? Well now you can do it in NU, with this special core: Rapidash, Ferroseed and Quagsire! Budget Ferrothorn Ferroseed can set up rocks and chip offensive mons that it checks. Fake Seismitoad Quagsire is a surprisingly solid physical wall that checks set up attackers and can stall them out. Finally, you got Rapidash, which can come on the defensive core's counters and set up on them. For maximum B A L A N C E, I recommend adding a Budget Clefable Clefairy to round out the defensive core.
Last edited: May 15, 2020

Vote for the two cores that you like the most!

This week we have two winners: Rabia and Jonater!

Each of their cores is re-posted below.

Are you tired of terrorizing poor OU players with your generic bulky offense with toad, ferro and miscellaneous offensive mons? Well now you can do it in NU, with this special core: Rapidash, Ferroseed and Quagsire! Budget Ferrothorn Ferroseed can set up rocks and chip offensive mons that it checks. Fake Seismitoad Quagsire is a surprisingly solid physical wall that checks set up attackers and can stall them out. Finally, you got Rapidash, which can come on the defensive core's counters and set up on them. For maximum B A L A N C E, I recommend adding a Budget Clefable Clefairy to round out the defensive core.
Click to expand...

There isn't necessarily a whole lot synergy between these three Pokemon; this core functions well more because the Pokemon all fit on bulky offense very nicely. Toxic + Protect Wishiwashi is really good at chipping away at Grass-types for Gourgeist-S, while Gourgeist-S can smack Water-types that trouble Silvally-Fire.
[i'll add that Dragon Claw Silvally-Fire and Explosion Gourgeist-Small can both lure Drampa, which annoys the rest of the FWG core].
Click to expand...

Moderator
Hi, im the new Co-host and going to help out Expulso with this project to get some fresh wind into it.​

We decided to designe the core arround some of the big new stuff we got recently; mostly more viable Ghost-types e.g. Decidueye + a buff in Poltergeist for many physical Ghost-types - a ton of good and cool Normal-types e.g. Milktank & Kangaskan - Fighting-types that got buffed like Triple Axel Hitmontop or are just really good atm like special Toxicroak.

To aid your team-building, I have put together a list of viable Pokemon for each type, although you are not limited to this list.

Good luck! Check the rules in the OP before posting.
Submit your cores by July 19 and voting will begin next Monday.

NP cofa and Kanga have a good synergy, as Cofa is able to power through a lot of teams but is threatened by other ghosts if it hasn't set up trick room. Kanga to the rescue who can come in on a fast ghost move and threaten with the scrappy Fake-Out into Sucker combo or a fat Double-Edge. In return Cofa is usually able to defeat physically offensive fighting types even without defense investment as well as defeating Iron Defense variants of opposing cofa through its use of Kasib berry. To round out the pair a bulky top is used who can stomach powerful special moves such as decidueye's leaf storm and retaliate with tech boosted triple axel. Another benefit of this trio is that if cofa goes down while sweeping and trick room is still up, both core mates have priority access to keep you in control of the battle.

This core would enjoy being on a team with toxic spikes and or spikes, as Hitmon can spin for the team and threaten most spinblockers other than cofa, while NP cofa can spinblock opposing spinners and usually get a plot or TR up while they pull out their spinner.

Hardly a core, but just 3 sets that work well as the main agressive parts for a team. Kanga punishes Fairy/Poison-type pokemon for Cofag to set up, Kanga wittles Ghost-types for Cofag to set up, etc. Sawk cleans late game if any of the above 2 even remotely did their job. Spikes are fantastic with this and the team overall does a decent job at punishing pivoting teams without a capable wallbreaker or reliable set up in the form of speed control.

Standerd Kanga set, optimizing it's chances vs pivots. Lum is an option to screw with Rotom-n if you really want it worn down early game.
Cofag is using a wincondition Iron Defense Rest-o-Chesto set that typically affords set up against Kangaskhan answers.
Sawk is standerd Choice Scarf with Stone Edge to punish Flying-types.

Why not throw in a little KangaSpikes into the mix? Kangaskhan is nice here with that double priority Fake Out + Sucker and the fact that Double-Edge hits everything that doesn't resist it very well. Add in Scrappy and throw on a stylish Silk Scarf and this thing can do serious damage. Froslass is the spiker here and can help with the physically defensive mons that Kang can have trouble with. Toxicroak is there too as a safety net for Fighting types along with Lass. It also has the NP sweeping capabilities which can be helped by Spikes as well. Overall, maybe not the best KangaSpikes core, but it can get the job done.

Toxicroak @ Life Orb
Ability: Dry Skin
EVs: 252 SpA / 4 SpD / 252 Spe
Timid Nature
IVs: 0 Atk
- Sludge Wave
- Vacuum Wave
- Shadow Ball
- Nasty Plot
This core focuses on facilitating a toxicroak sweep. Scarfed rotom gives you a switch in to flying types such as ninjask and unfeazant, as well as a ground immunity with levitate, and allows you to trick bulky mons like quagsire. Miltank provides a switch in to ghosts such as deciduye and forces golurk into a 50/50.
Last edited: Jul 16, 2020

Although I host this competition, I figured I'd post one this week!

Hitmontop (M) @ Choice Band / Life Orb
Ability: Technician
EVs: 252 Atk / 4 SpD / 252 Spe
Adamant Nature
- Close Combat
- Triple Axel
- Mach Punch
- Toxic / Rapid Spin / Sucker Punch
Pretty standard core here. I started with Specs Decidueye, a very strong wallbreaker I've been meaning to use for a while. Its biggest counter is Miltank, so a Fighting-type naturally provides great support. I wanted the power of a Choice Band Fighting-type but didn't want to be walled by common fighting resists like Colbur Rotom, Clefairy, Garbodor, etc. Thus, I chose to use Choice Band Technician Hitmontop. Technician gives Triple Axel 180 BP, effectively giving Hitmontop an Ice-type STAB Close Combat. This lets you do really cool things like potentially OHKOing Clefairy on the switch: 252+ Atk Choice Band Technician Hitmontop Triple Axel (40 BP) (3 hits) vs. 252 HP / 4 Def Eviolite Clefairy: 309-366 (89.8 - 106.3%) -- approx. 25% chance to OHKO.
(You can also run LO Hitmontop, the power from Band is really great but LO comes close while letting you avoid any possible 50-50s).
In the third slot, I included Kangaskhan to help clean after Hitmontop breaks through some of Kangaskhan's checks, such as Cofagrigus, Garbodor, and Sandaconda. This Kangaskhan set is Jolly in order to outspeed Toxicroak, which is otherwise a massive threat to this core.

If I were building a full team with this squad, I would want to include:
- hazards, ideally Spikes
- an answer to SD Silvally formes
- a fire resist
- a flying resist
- speed control
- something to get my wallbreakers in safely

If anyone is looking for teambuilding inspiration, a team of these three plus Persian-Alola, Qwilfish, and Sandaconda/Stunfisk-G seems pretty solid :) 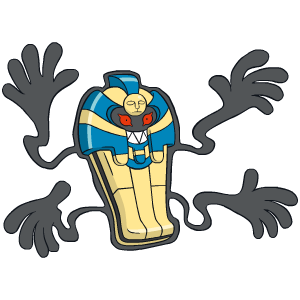 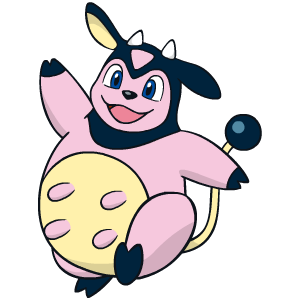 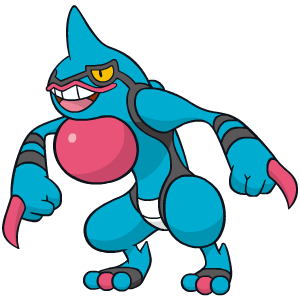 The core is a simple thing, endure damage, wear out and finally kill with croak

Sets are common: spd cofagrigus with pain+wow to hold and toxic spikes to wear out (and Shadow ball by Stab a.a)

Moderator
Week 6 - Voting!
Thank you guys for the insane amount of submissions - Keep it up!
The submitted cores are:

Vote for your two favorite cores of this week!
Voting will end this Wednesday, July 22th at 21:00pm UTC +2