Won GG, not a bad debut if I say so myself. ;3
https://replay.pokemonshowdown.com/smogtours-gen3nu-628763

I am the Scientist now

won gg soz for the crit vs metang 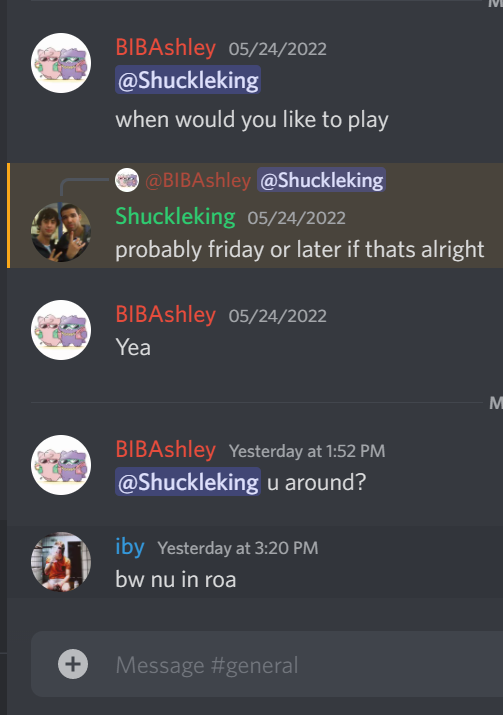 waited half a week for a response, we schedule for saturday evening, then he asks to change to sunday at 7, at 7 he asks for 30-45 mins and still doesn't show. Calling act I have work tmrw..

first attachment shows I was logged on before you logged off.
2nd attachment, which im not gonna be a beta and not show everything, says that I was going to be back between 8 and 8:30, there was never prior messaging that you were not going to be available in the timeframe you were originally fine for. I also messaged you on discord while you were busy playing minecraft, then immediately went gray.
Edit: 3rd message to show all of the messaging, i didnt read his message through. He also waited a half week to reach out to me and it shows i responded that day. the other @ in their message, I didnt see in the public forum so fair, thats why i reached out by message on saturday (we never agreed to saturday anywhere) to 7 and then with family plans agreed to 8 to 8:30. I dont come to this site for like 2 times out of the year for stuff like this I wanna play LMAO

don't put me in a box now

well this is awkward.

Aawin said:
well this is awkward.

won gg in a weird one
https://replay.pokemonshowdown.com/smogtours-gen7nu-629292