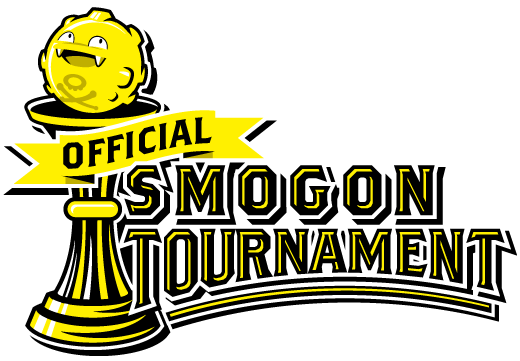 SIGNUPS ARE CLOSED!
YOU CAN NO LONGER SIGN UP FOR THIS TOURNAMENT!​
Welcome to this year's edition of one of Smogon's longest standing traditions, the Official Smogon Tournament! The format is as simple as it is classic - a winner-takes-all best of three in the current generation of our OverUsed format!

Players will be picked randomly against one another for as many rounds as it takes to find one final champion. While posting replays will never be mandatory throughout this tournament, it is encouraged to save them in case of any disputes! Seriously, do yourself a favor and save them somewhere.


In case of disconnections, you may submit your teams in a Private Message to me (Tony) on Smogon before your games are played. If a disconnect happens and teams were submitted, post the replay in the thread and the circumstances that surrounded the disconnection, and I will be able to give you a call on how we proceed.


Playing before the prediction tour occurred

The prediction tournament will return this year! You may play before the prediction tournament is up but try not to announce the result of your games before it actually get posted. In case you would play, the result wouldn't be altered anyway.
Just like last year, there will be a cash prize for this tournament! The winner of this year's Official Smogon Tournament will receive 200 USD! If there are any questions, please don't hesitate to reach out to me or another TD team member!

Signups are closed! Out of the original 2048 signups, the first 62.5% of users that signed up will be guaranteed a spot in the tournament, while the remaining 37.5% will be randomized. It's worth emphasizing that we're expecting a ton of substitutes to take place, so not making the original cut doesn't mean you're excluded from participation by any means.