Unfortunately, this replay doesn't qualify for the achievement, because:

The opponent forfeited with 3 Pokémon left, making the achievement invalid.

Silver_Lucario42 said:
Unfortunately, this replay doesn't qualify for the achievement, because:

The opponent forfeited with 3 Pokémon left, making the achievement invalid.
Click to expand...

dragons are a type of terrain
http://replay.pokemonshowdown.com/ou-419113660

Hoisted by his own petard
http://replay.pokemonshowdown.com/ou-417718260

oyeah and taste the rainbow 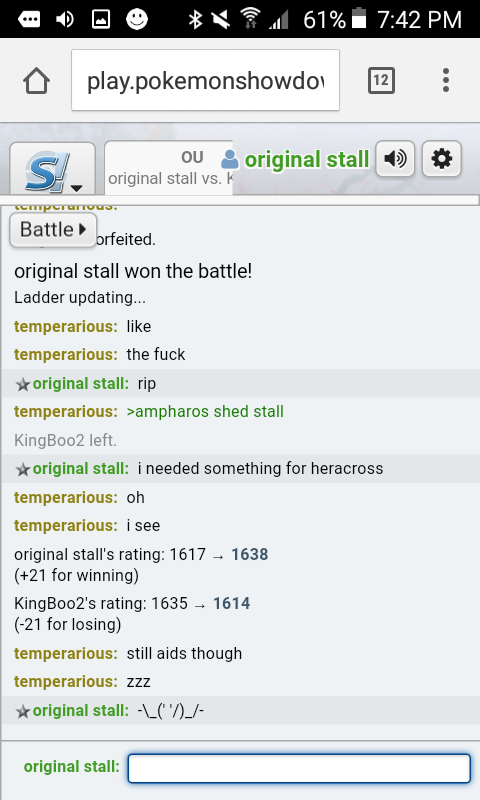 Here's Preservation and Quick Finisher: http://replay.pokemonshowdown.com/ou-425713249
I was thinking of adding a new achievement.

This Isn't Even My Final Form
Win a battle using only alternate forms of Pokémon (Thundurus-Therian, Lopunny-Mega, Cherrim-Sunshine, Gastrodon-East, etc)
Let me know what you think of it!

Silver_Lucario42 said:
Here's Preservation and Quick Finisher: http://replay.pokemonshowdown.com/ou-425713249
I was thinking of adding a new achievement.

This Isn't Even My Final Form
Win a battle using only alternate forms of Pokémon (Thundurus-Therian, Lopunny-Mega, Cherrim-Sunshine, Gastrodon-East, etc)
Let me know what you think of it!
Click to expand...

I like the idea but I don't think the title fits the achievement. "This Isn't Even The Real Me" or "It's Just An Alternative Me" fit better in my opinion.

Ultimate tier-Happy Thanksgiving= went 65-0 on an alt account, I don't know if this counts since it's not 50-0.

For Bronze: Underrated (reuniclus was my pokemon)

my best gxe i've ever had on ladder

UPDATE 9/1/2016 (oh no the summer is over)
Added the achievement "Not the Real Me" (thank you for the name suggestion Amane Misa) to the Ultimate Tier Achievements. I figured that if I added it to a lower one, then that would mean I'd have to take away the "-God" achievements from everyone, which would be no fun. Obviously I can't keep stacking the Ultimate Tier with new achievements, so this is just a temporary solution.

Not the Real Me

Win a battle using only the alternative forms of Pokémon; i.e. Lopunny-Mega, Gastrodon-East, Cherrim-Sunshine, Thundurus-T. The Pokémon doesn't necessarily have to enter the battle in this form, but it must be in the form at some point in the battle.
Achievers:
Thank you all for the continued support!

That should be all. Happy achieving!

Is it ok to suggest achievements?

Is it ok to suggest achievements?
Click to expand...

Suggesting achievements is fine. In fact, if you look at the existing ones, you'll see that many have been introduced because of a suggestion.

One more thing about creating new achievements: As I said before, I don't have a permanent place for new ones, so suggestions for such a place are appreciated.

I'll add these guidelines to the OP under a new hide tag. In other news Xenforo is bad (see Ultimate Tier).

Okay, as for now I got two cool ideas. Imo one is better than the other but I will post both anyways just for the lols. I hope you will like them haha.

I don't think this is too dependent on luck. You got a very powerful wallbreaker (Darmanitan), a sweeper (Vivillon) and Rhyhorn, Corsola and Gabite got a very decent bulk.

I think it does encourage players to do thing they haven't done before like trying to win mostly with non-viable OU Pokémon that have their niches.

And I think it does encourage creativity because you gotta take into consideration that most Pokémon aren't too viable (but as stated before, have their niches) but I don't think you can only use a single strategy.

Quite Alphabetic: Use a team with Pokémon in an alphabetic order (examples: Ambipom, Blastoise, Cacturne, Delphox, Eelektross and Frogadier or Magmar, Nidoking, Octillery, Pyroar, Quagsire, Raikou and etc.)

It's not too dependent on luck because you can build a nice team, pretty sure no one have ever thought of making a team like this so it's pretty creative and I don't think you have to use a specific strategy in battle.

(Idk what to call it yet)
Win with a team of six consecutive Pokemon in the national pokedex. Uber Pokemon may be skipped. An example team would be treeko, grovyle, sceptile, torchic, combusken, and mudkip (since blaziken is in ubers)

Wording could probably be better, but you get the point

Preservation, Greed Pays off Sometimes http://replay.pokemonshowdown.com/ou-431022562
proof its me http://imgur.com/a/8hA68

Underrated (Haxorus)
Where At He Doe?