Voting for blissey killer, i love that set

Bit late, sorry!
The voting phase is over! By its results, the winner of cycle 41 is Super Fang by Zneon. Congratulations! Your submission will be added to the Hall of Fame soon. Now let's move on to the next cycle!

Like last generation, Tornadus-T is a great offensive pivot and Defog user thanks to its access to plenty of utility moves like Knock Off and its fantastic ability in Regenerator, in addition to Heavy-Duty Boots now at its disposal. Not only that, with its newly gained access to Nasty Plot it can also act as a strong wallbreaker.
There's plenty more to explore though, so let's see what you've got!

The deadline is Thursday 28th of January. Good luck!​

Tornadus-Therian (M) @ Maranga Berry
Ability: Regenerator
EVs: 4 HP / 252 Atk / 252 Spe
Jolly Nature
- Bulk Up
- Superpower
- Acrobatics
- Knock Off​
Tornadus-T with access to Bulk Up has the ability to muscle through many pokemon in the ou tier, such as Heatran, Kartana, and Rillaboom. To add onto that it can use them as a setup fodder when they're locked into their Grass-type STAB moves or in their Fighting-coverage in Sacred Swords or Superpower / Drain Punch. Tornadus-Therian however cannot boost its special defense in that scenario so it holds the Maranga Berry to boost the special side, when it gets struck by a special attack means it has a +1 in its Attack, a +1 in its Defense and a additionally +1 in its special defense. Furthermore Tornadus-T can make use of this item exceptionally well, as it has Acrobatics in its set, which gets boosted after the consumption of its item.
Last edited: Jan 23, 2021

A classic from back in gen 6, Life Orb Tornadus-T is shockingly hard to switch into consistently thanks to its high Speed, excellent coverage, nuclear Hurricanes (though less so than Torn-I), and solid range of utility options. The moves are pretty self-explanatory for the most part, but I'll try and explain the less standard options briefly.

First and foremost, LO Superpower lets Tornadus-T bypass Blissey entirely, with 52 Atk + Naive always 2HKOing it as it switches in, while also being a 100% accurate option to hit Pokemon like Tyranitar and Heatran with, OHKOing non-Chople variants of the former and always 2HKOing max HP Tran after Stealth Rock.

Of course, Life Orb is useful for stuff other than going mixed. Aside from turbocharging Torn-T's Nasty Plot set—letting Torn again such lofty goals as OHKOing mixed def Toxapex at +2 and OHKOing AV Galarking after Stealth Rock at +4 (NP on switch, NP again on Future Sight, Hurricane to one-shot)—the additional firepower behind unboosted attacks is also welcome, 2HKOing SpD Mandibuzz and mixed def Toxapex with a little chip, among other things.

One of the main advantages of Taunt is that it lets Tornadus shut down moves like Teleport, Thunder Wave, Spikes, Defog and Recover, which is especially useful versus the likes of SpD Toxapex—a thorn in non-boosting Torn-T's side—while helping out versus Pokemon like Corviknight, Blissey, and Heatran if you lack the appropriate coverage option. It's mainly there for Superpower variants though, as you probably wouldn't want to carry Nasty Plot alongside it.

One thing Torn has over a lot of other Life Orb users is access to Regenerator, meaning it can circumvent some of the wear and tear that comes with its item choice, though on the flipside its SR weakness means that Torn-T needs consistent hazard control to not go into Regen debt after one attack—Tapu Fini, Corviknight, Zapdos, and utility Drill come to mind, and Mew/Lati@s might be OK too once Spect is gone (especially considering they won't face competition as a fogger from shitass Defog Hydra anymore).
Last edited: Jan 23, 2021

Tornadus-Therian @ Rocky Helmet / Leftovers
Timid Nature
Ability: Regenerator
EVs: 252 HP / 4 Def / 252 Spe
- Hurricane
- Knock Off
- Taunt
- Toxic / Defog​
[It is sadness that we can't use HDB because this set would be amazing with it :c]
This set trades away pivot capability of Tornadus-T, and converts it in a very annoying fat-breaker. Knock Off always makes progress and can cripple any switch-in removing its item, which in this meta is highly valuable. Taunt is very good for crippling defensive answers who relies on status moves to function like Blissey. Toxic is very interesting option because it put on a timer checks like Zapdos and Tyranitar, which in combination with Knock Off and Taunt can wear them down pretty quickly, however, Defog still can be used if you need removal, but I think this set function better with the combination of Taunt + Toxic. Also, this set still has the defensive utility of pivot Tornadus-T, which comes in handy against threats like Kartana and Rillaboom. Item is up to you, but I think RH is better to chip U-turners like Landorus-T.
Last edited: Jan 24, 2021

Tornadus-Therian (M) @ Choice Specs
Ability: Regenerator
EVs: 4 Atk / 252 SpA / 252 Spe
Timid Nature
- Hurricane
- Focus Blast
- Heat Wave
- U-turn / Sludge Wave / Weather Ball
​
Choice Specs-boosted Hurricanes from Tornadus-T are no joke, especially in rain teams where it can spam them freely! Focus Blast and Heat Wave are used for Steel-types like Magearna, Heatran, Corviknight, and Aegislash. They also hit targets that resist Flying, namely Zapdos and Tyranitar. U-turn is the final move, taking advantge of Tornadus-T's ability in Regenerator and its great Speed tier. Coverage moves such as Sludge Wave for Clefable and Tapu Fini and Weather Ball on rain for Heatran and Moltres are also options so you don't have to risk missing your other moves, but you unfortunately can't fit all of them. Fun weather teams with other Weather Ball typings like Rock for Zapdos and Moltres, Fire for Ferrothorn, and Ice for opposing Tornadus-T, Dragonite, and Mandibuzz can be interesting lmao. However, Pokemon like Blissey and Assault Vest Galarian Slowking still wall you to no end.
I'll let the calcs talk for themselves, though. 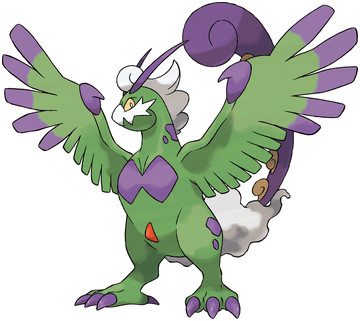 With its access to a naturally high speed tier and an amazing boosting move in Nasty Plot, it is able to shred apart common balance cores that rely on Zapdos or Corviknight as their flying resist. It benefits greatly from rain, being able to fire out 100% accurate Hurricanes and having access to Weather Ball gives it a powerful move to hit targets that resist Hurricane. Focus blast rounds out coverage against the likes of Tyranitar, Heatran outside of rain and Ferrothorn. Life Orb allows it to OHKO one of its best checks in Zapdos at +2 while being able to OHKO and 2HKO many important targets as shown in Calcs. A great ability in Regenerator lets it heal off Life Orb recoil and come in again to wreak havoc on your opponent's team. Nasty Plot Torn-t can be used without rain too with Heat Wave>Weather Ball but then it has to rely on hitting all of its hurricanes and focus blasts to sweep which is a little inconsistent.

Nasty Plot is probably the most common set-up move for Torn-T, so I thought I'd take a leaf out of Spectrier's book and team it with Substitute. This prevents it getting hit by priority (such as Weavile or Mamo) or simply being outsped, although do watch out for Infiltrator Pult if you use this set. Air Slash & Heat Wave were chosen as the 2 best coverage moves. Air Slash does have that very handy flinch chance that fits well with Torn's great speed stat, and although Focus Blast probably has better coverage than Heat Wave, we actually like to hit our moves.

Edit: as I posted this someone reserved Plot Rain Torn; if this submission isn't different enough from that please let me know and I'll come up with something else.
Last edited: Feb 5, 2021


The idea is to use the combination of Regenerator + Assault Vest to have an emergency check in offensive builds.
Old set, but still gold.

U-turn is picked to keep the momentum, whereas Knock Off is here for general utility.
Hurricane is the main STAB and Heat Wave is picked over Focus Blast for accuracy issues.

General idea
Does the fact that glowking is doesnt get teleport like its brothers fill you with righteous anger? Are you tired of all those which is better, slow pivoting or fast pivoting arguments? If your answer to at least 0 of these questions are yes, I have the set for you!
The main idea behind this set is that it can choose whether to slow pivot or fast pivot depending on the circumstances. When you send it in forcing a switch, on the switch you can decide whether you want to hammer arm whatever is coming in, so your speed drops to 197(185 with the second EV spread), making you pretty much guaranteed to slow uturn on anything that isn't a wall(think slower breakers here, like nidoking, magearna, lando t...) or melmetal; or icy wind which makes you faster than anything unscarfed or regieleki. The beauty of this is that it allows tornadus both to assist teammates with free switches as the slow turner, and to keep itself healthy with regenerator as the fast turner.
Moves:
1. u-turn: nothing much to say here; you are a pivot, you run u-turn
2. Hammer arm: vital for slow pivoting, as it lowers your speed to slow turn levels.
3. Icy wind: good to get the fast turn on faster threats like tapu koko or spectrier; also means whatever you uturned into has an easier time since its speed control that also helps whatever you send out; also can do nice chip on some ice weak or specially frail mons while setting up speed control:

4. Knock off/Hurricane: depending on whether you want more of an utility role, or to do more damage.

The great thing about freeing up your speed and damage EVs means you can put them into defense to mitigate the wear and tear you are gonna receive during the match; for that reason assault vest was chosen to make the most of its' special bulk, making it quite bulky:

(keep in mind that you won't need to take more than one hit a lot of the time if you dont want to, as you can elect to fast pivot instead)

In conclusion this set is basically like a glowking that decided to trade in some special bulk for very nice pivoting abilities.

EVs and item
first EV spread makes you faster than max speed nidoking(which is the fastest threat you can EV for without losing too much SpDef EVs), while the second allows it to avoid some 2HKOs it otherwise wouldn't for certain, like specs lele psychic. something else to notice is that 0 IV/EVs in speed let it be outsped by non-speed invested magearna after a hammer arm. Not running max speed also makes you slower than cinderace by default which means you can punish his u-turn with your own slower u-turn, while extra hp investment means it can't OHKO you.

Teammates
Defog support is very important, and wish passing is pretty nice for this set. Slower offensive teammates that appreciate it's pivoting capabilities for either slow switches or fast switches with speed control should also be considered: nidoking,obstagoon,rilla,bisharp,specs lele... 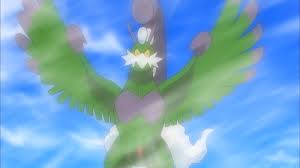 Discount Z-Fly hits surprisingly hard, especially if your opponent expects a Hurricane. I prefer BU for late game cleaning, but U-Turn lets you act as more of a pivot. Acrobatics is reliable stab after the Fly nuke, and Knock Off is Knock Off. The suprise value of this helps but its a pretty legit cleaner. If u wanna not be 3hkod by neutral spectrier run EVs: 200 Hp / 252 Atk / 48 Spe.
Depending on the team, fly can be useful later too, like for stalling out tspikes on your opponent, or against phantom force pupt if anyone still uses him lol
Last edited: Jan 26, 2021
You must log in or register to reply here.
Share:
Reddit Pinterest Tumblr WhatsApp Email Link