And let's start the voting phase! We got 9 submissions so far:

nameless90 your submission wasn't included, since it doesn't deviate from one of the banned sets enough. The deadline is Tuesday 8th of December.​

Too many great and fun submissions here, its hard to chose 1 Set, but i go with Zneons Choice Specs Pheromosa.

But great submissions y'all!

Egor said:
nameless90 your submission wasn't included, since it doesn't deviate from one of the banned sets enough. The deadline is Tuesday 8th of December.
Click to expand...

I vote for Choice Specs by Zneon
because Pheromosa's special movepool is good to work with although U-turn is physical.
Last edited: Dec 6, 2020

Specs. Honestly not looking like it's gonna be close

The voting phase is over! By its results, the winner of cycle 36 is Choice Specs by Zneon. Congratulations! Your submission will be added to the Hall of Fame soon. Now, let's move on to the next cycle!

With the Crown Tundra expansion, Landorus-T has finally returned as the most used Pokemon in OU globally. It has many desirable qualities going for it after all: strong, solid bulk, Intimidate, Electric immunity, Ground immunity, Stealth Rock, U-turn, and so much more. This makes it a splashable Pokemon that can fit onto many teams and is able to fulfill various roles effectively, such as offensive pivot, defensive pivot, suicide lead, and Swords Dance wallbreaker.
Do you have any other set ideas you'd like to showcase? Let's see it!

The deadline is Sunday 13th of December. Good luck!​

Landorus-Therian (M) @ Choice Scarf
Ability: Intimidate
EVs: 136 HP / 128 Atk / 244 Spe
Naive Nature
- Earthquake
- Psychic
- U-turn
- Stone Edge
Okay I'll quit my usual "Hate this? Well use this..." stuff and get right to the point. Lead off with this thing and KO Pheromosa turn 1 with a Scarf Psychic. Revenge every non-QD Mosa set with a guaranteed OHKO; no need to risk hitting a Stone Edge or go for a 2HKO but die to Triple Axel first. Switch into and force out/KO every Dragonite set. Revenge Modest Max Speed Shift Gear magearna with an OHKO. 2HKO the most common Buzzwall spreads and see the look on your opponents face.

Given set EVs are to never be 2HKOed by Jolly Dragonite Dual Wingbeat at +0 (if they DD as you switch) so you can 2HKO them with Stone Edge. HP EVs are to OHKO 0hp 0def magearna after Rocks and a round of lefties. Speed EVs are to outspeed Modest max speed Magearna after a shift gear and Jolly Arctozolt in hail.
Last edited: Dec 8, 2020

A concept I have yet to use much at all honestly, but wanted to try. It is able to lure in and demolish Buzzwole while also having potential against Rillaboom, Tangrowth, and some midgrounds (gets lots of neutral hits, which can go a long way at +2 if you are not sure what to predict vs non-Grounded Pokemon). Stone Edge vs Knock Off just depends what you prefer between hitting specific Flying type Pokemon like Zapdos or spammability/utility in match-ups where SD LandoT is less directly productive. I prefer Stone Edge right now in theory, but again need to give it more of a go in practice.

This set is probably pretty good alongside other physical attackers like Urshifu and Kartana, who do not appreciate Buzzwole and Tangrowth. It is absolutely situational, but most posts here for LandoT will be as it is a mostly "solved" Pokemon.

With the all-spammable Earthquake and U-turn tag along with 145 base Atk stats, it functions as well as other choiced physical breakers. Unlike others, it does not take Spikes/Toxic-spikes upon entry and provides 2 natural immunity which is ground and electric which makes Landorus-Therian has its own niche among the physical choiced breakers. Simply exquisite and splash-able~

Supplements mons like SubCM Spectrier, Subs up on Hippowdon that run EQ + Toxic or just get a Toxic on them, Toxic non steel birds, Toxic the buzzwole and slowbro that always switches in, Smack down for steel birds and threaten Molt/Zap a bit more, etc. Better against fatty cores. Adamant for stronger hits against Clefable, Pex, and friends. Not to be used as a defensive countermeasure like Defensive variants. Spread Toxic around to help other mons.

Sub Bulk Up Lando-T takes advantage of many of the common checks to Lando to setup. Steel Birds, Hippos etc.

Max HP + Max SpD allows Lando to both shore up it's SpD stat, but also strengthen both its substitutes and physically defensive prowess. EQ + Fly was chosen for a STAB combo which isn't resisted by much. Fly allows you an extra turn of Leftovers, but also to hit Grass / Bug types like Buzzwole and Tang which resist EQ.

Lando-T is such a threatening mon that you often can just click sub to start with in favorable matchups. That being said, this set struggles to get through Zapdos. Overall, very fun to use, and can just autowin games if you have the right matchp.
Last edited: Dec 12, 2020

is an old classic, but this can still work in the current metagame, as it is able to break past many threats with its enormous base attack of 145 and its great typing in ground and flying. While it doesn't face many weaknesses, it still gets aimed by plenty of Water- and Ice-types. However, this set can function on Screen-support given by Regieleki, Tapu Koko, or Alola-Ninetales, so it has a better day on the battlefield.

This set contains Rock Polish and Swords Dance, as its 2 Setup moves of choice, Rock Polish is to help out Lando-T with its speed stat, whereas Swords Dance helps it out to have more breaking power. When Lando-T uses Rock Polish and an opposing Pokemon comes in to attack it and hits it with a super effective attack, it gets on top of that a Weakness Policy-boost, which helps Lando-T a lot, so it gains an attack-boost by 2 stages, which is basically a Swords Dance-boost. Lando-T turns into a very deadly sweeper and it can decide to Swords Dance or to Rock Polish again later at a very comfortable position in the game.

Furthermore, it has Stone Edge to hit Flying-types such as Zapdos, Tornadus-T, Pelipper, Moltres, and Corviknight, while it is also able to hit levitating Pokemon like Latios, Latias, and Hydreigon with Stone Edge as well. The last slot is its STAB move in Earthquake, which hits extremely hard after a Swords Dance-boost and it can claim a lot of OHKOes on many non-grounded Pokemon with Earthquake.

In overall, this set functions well on Screens-support and aims to claim kills in the mid-game or late-game and with an Swords Dance-boost it can net plenty of Pokemon with an OHKO and due to Rock Polish, its first move in the set, it can outspeed plenty of faster, dangerous threats to it such as Choice Scarf Kartana and Jolly Excadrill in sand stream.
Last edited: Dec 9, 2020


General idea
Here we have an offensive Landorus-T, but with the added bulk provided by AV in order to be able to offensively check some special attackers while being able to dish out enough damage.
StoneQuake combination is here to have some coverage and power, whereas U-turn is here to keep the momentum. Knock Off is here to have both power and utility thanks to the lack of Megastones and Z-crystals in the OU environment.
Look at these calcs:

Team(mates) support
Wish and Aromatheraphy support is always appreciated in order to get rid of burns.
In return, this Landorus-T provides U-turn suppoert and a good offensve check with two immunities and Intimidate.
Last edited: Dec 9, 2020 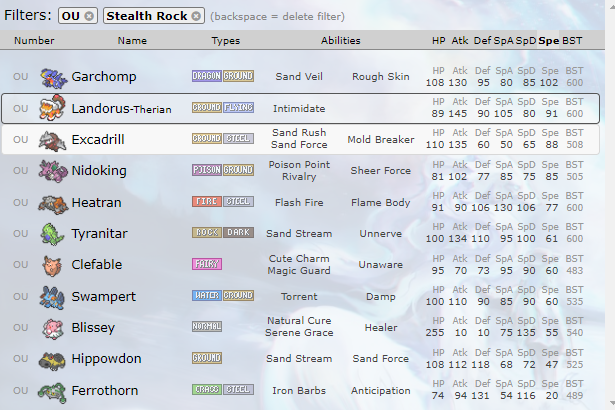 Garchomp is the only OU mon with access to Stealth Rock faster than Landorus-Therian, so you can stop your opponent's rocks, put your own and explode. Mirror lead can be a pain.

*Apologies if it is not sufficiently different from the forbidden set. In this case I will take Gravity.
You must log in or register to reply here.
Share:
Reddit Pinterest Tumblr WhatsApp Email Link