Metagame Pawniard is Broken and Should be Banned From LC

Disclaimer: I didn't know where to put this thread, so I put it here. Hopefully it's fine. Also, there is a lot of text here. I suggest you read everything but I have a TL;DR at the end of the post. All calcs are with standard Eviolite Pawniard.

Hello everyone, and please hear me out. So I have been playing LC for a decent while, and I'm subscribed to numerous competitive Pokemon channels, so I have some experience and know what I'm talking about. Basically, Pawniard is actually broken and should be banned from LC. I see him all the time and I feel that there's barely any counter-play. I know this is a bold claim to make, but I have certain points I would like to share to everyone else along with solid proof/calcs. Of course there are much more experienced players than me, so I would greatly appreciate if you would comment on your opinions about this topic. I would like to hear the opinions of others who agree and hear the reasoning for those who disagree. (I'm expecting most people to disagree, maybe you can change my mind or something...)


First off, if you take a look at Smogon or Pokemon Showdown, you'll notice that Pawniard is viable in LC, PU, and even NU. What?! I know there are other Pokemon like this such as Ferroseed, but a Pokemon who is viable in PU should not be in LC, considering it's a whole tier above. However, Pawniard is also viable in NU, which is two tiers above LC! 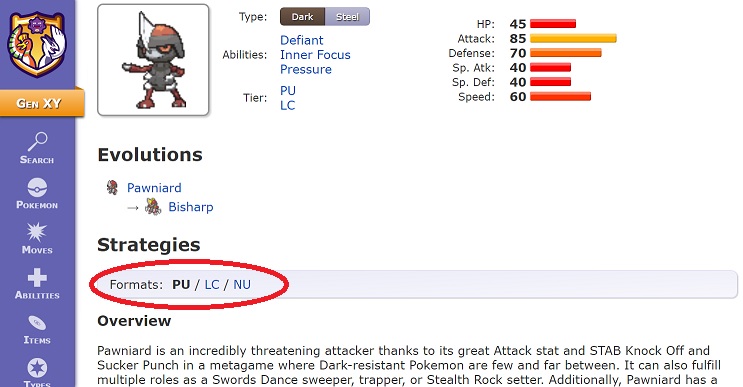 To add on to this, Pawniard has an extremely high usage in both LC and PU. If you look at this Smogon page, you can find the % usage of every Pokemon in every metagame, based on ELO, since August 4; which is pretty accurate to when I posted this thread. You can check the LC and PU if you want, but I'm putting in the stats for Pawniard below: 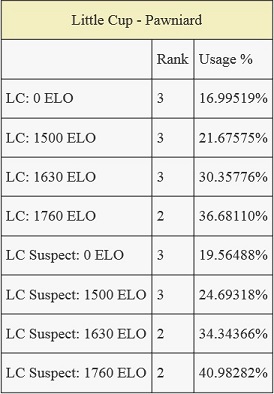 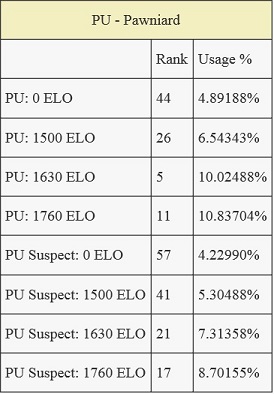 ​
What you need to know is that the cutoff point for a Pokemon to be in a tier is 3.41%. For example, if a Pokemon is used on 4% of OU teams, it is considered OU and is banned from any tier below OU.


Now for the actual battling. One major problem, similar to the Salamence ban from UU, is that it is extremely difficult to figure out what set Pawniard is running. Not necessarily with moves, but with items and EVs. It can be running the Standard Eviolite set, a tankier Eviolite set, Life Orb, Choice Scarf, and even Choice Band. Therefore, it's extremely hard to play against any Pawniard because you don't know it's item. You can switch into your wall to tank a Knock Off expecting it to be Eviolite just to find out that it's actually Life Orb/Choice Band. You can switch into your revenge-killer to try to KO it, but it's actually Choice Scarf and OHKOs you first. In order to find out it's item, you have to use Knock Off, which does extremely little damage because of Pawnaird's typing. This makes the battling very complicated and stressful, and this is just for Pawniard. Then you have the other 5 Pokemon to worry about. Normally, Pokemon in LC have around 2 set options, but Pawniard can have 4 or 5. What I'm trying to say is that Pawniard gets too many set options, which makes counter-play very situational.


Another problem is that Pawniard does not suffer from 4th moveslot syndrome. For those who are not familiar with this term: if a Pokemon has 4th moveslot syndrome, it has so many great moves but can only use 4. A great example was Greninja back when it was in OU, as this was really the only claim for people who didn't want to ban him. Greninja has Hydro Pump, Scald, Dark Pulse, Ice Beam, HP Fire/Grass, Gunk Shot, Low Kick, Extrasensory, and U-Turn; but he can only use four of those moves. A current example is Gliscor, who has Earthquake, Knock Off, Substitute, Protect, Toxic, Swords Dance, and Roost - but again is only allowed to use 4 of these moves. But what about Pawniard? Well, Pawniard doesn't even need 4 moves; he only needs freaking 3: Knock Off, Iron Head, Sucker Punch. That's it! The last move depends on what item it's running (Swords Dance and Brick Break for Life Orb/Choice Scarf, and Stealth Rocks for Eviolite), but it doesn't need these options.

This leads to my next point, which is that Pawniard does too much damage with these moves, especially Knock Off. I'm not going into too much detail with the exact damage on every Pokemon, but I'm sure that many of you who play LC have seen Pawniard's damage output. With Life Orb and even Eviolite, Pawniard's Knock Off 2HKOs pretty much anything that doesn't resist it. The same thing applies to Iron Head, which 2HKOs most Pokemon that resist Knock Off. However, the main problem here is with Knock Off. Knock Off is an extremely powerful and popular move in LC because many Pokemon run Eviolite, and knocking that off takes away a huge amount of bulk. Knock Off is also supposed to be a utility move, as it's used specifically for this purpose. However, with Pawniard, Knock Off is now a primary damage-dealing move that destroys everything, with the side-effect of taking away an item. As you can see here, this is extremely unbalanced. Pawniard gets too much reward just by spamming Knock Off because it does tons of damage and gets rid of items, which is extremely important in LC and detrimental to a lot of walls in LC as well. My point being that Pawniard is way too reliable while only using Knock Off because he does too much damage with it and gets too much of a reward, which creates an unhealthy relationship between the two.

Another issue is dealing with hazard control when facing an enemy Pawniard. Pawniard gets Stealth Rocks, and most teams with Pawniard have supports like Onix and Drilbur who get access to Stealth Rocks. However, getting rid of hazards, whether in Rapid Spin or Defog, is too risky and dangerous against an enemy Pawniard. Pawniard gets free +2 attack if you Defog hazards on it or when it switches, which means you're going to have to sack something (+2 Pawniard OHKOs/2HKOs most of the tier). Furthermore, Pawniard 2HKOs most relevant Rapid Spinners with Knock Off and gets rid of their item. This makes it so that your Rapid Spinner will probably not do its job anymore because now it has below 50% health and without Eviolite. Calcs against the relevant Rapid Spinners and Defoggers are shown below. The Defog calcs have Pawniard at +2, since the Defogger just used Defog against Pawniard's Defiant:


And that's what I have to say. The TL;DR below sums up this thread pretty well, but Pawniard is just too reliable in both LC and PU and Knock Off is broken on him. I'm really stressing the Knock Off here: it does create an unhealthy state in the current meta. Pawniard should be banned from LC and take the same route as Misdreavus. It won't affect the PU tier because Pawniard is already extremely strong in it. There are other Pokemon that I can complain about, namely Mienfoo and Fletchling, but neither of them are viable in PU, and you can check the usage statistics for them. Now, I'm not trying to hate on Smogon rules or the Little Cup tier. I'm just showing why I think Pawniard is broken in LC. Again, I want your opinion on this, whether it is support or criticism. Sorry if this was really long, but I had a lot to say. Thank you for reading!


TL;DR:
PAWNIARD SHOULD BE BANNED FROM LC FOR THE FOLLOWING REASONS:

ill think about it