Project Player of the Week

this is the hard drive

Apologies nalo gang, inspite of the goat Gibraltar slayer getting the most votes this week , he has not responded to my pms 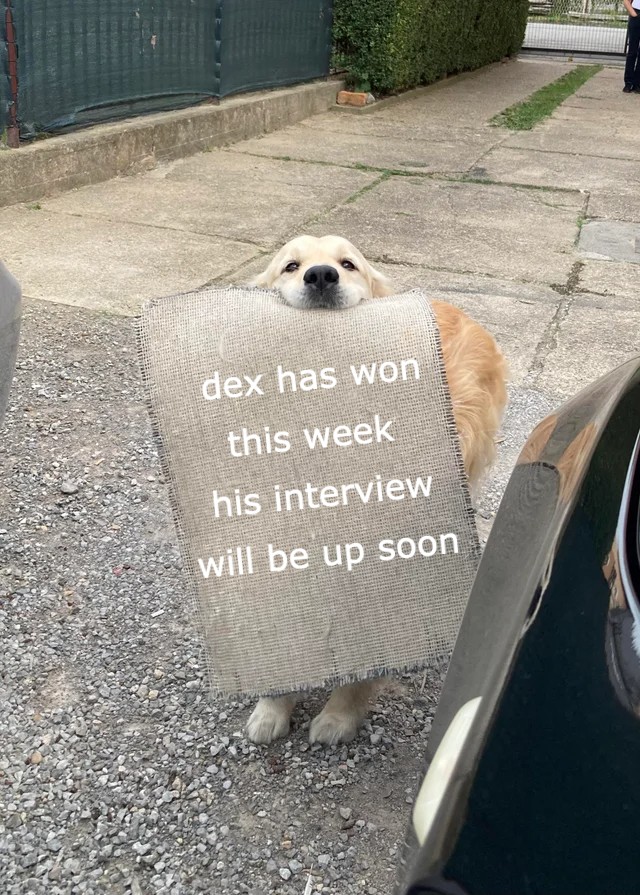 The government is now ready to answer your questions

our player of the week is !!

gm dex. The anti catboy association congratulates the government for taking up this interview. How has your day been so far?

It’s been alright! Got up pretty early cause I’m moving across the country.

ah good luck with that !! seems pretty scary to me tbh because i get carsick easily '-'

Alright well, tell me and the community a bit about yourself via a brief introduction, both on and off smogon. Name, age, favorite color, whatever you would like to say!

I’m dex, I used to be called dex18. The name comes from a homebrew dnd rule my dad used that required 18 dexterity to dual wield. I’m 22, my favorite color is purple, my favorite food is sushi, and my favorite Pokémon are sandslash, swablu, and spiritomb.

thats pretty cool !! How did you get into pokemon ? What made you interested in the competitive scene?

I was super into Pokemon as a kid, I remember asking my dad for a ds and Pokemon diamond and instead he got me a game boy and red, blue, yellow, gold, and silver. I was hooked since then. I got into competitive mons when I was in high school and I stumbled across showdown, though I didn’t start using smogon until the pandemic because I was bored as all hell and CAP looked fun. I stuck around in the competitive scene cause SHSP actually made the mistake of drafting me in CAP snake draft and the friends I made there (quziel, tnm, shsp) got me to want to stay and participate more.

What drew you to CAP in particular? What do you reckon is your favourite part of the process ?

Honestly I’m not sure what drew me exactly. I found the whole concept of CAP to be really interesting and I was definitely over eager in my first project, which was Miasmaw. My favorite part of the process used to be typing, but I’ve honestly become a much bigger fan of stats. It’s the easiest way to leave the most notable mark on the mon.

What are your thoughts on the current meta? Do you have any preferences in playstyle(s) overall ? on a similar note , what mons do you think are great picks rn ?

I think the current meta is in a pretty fun place, you can get away with running off meta shit cause there’s just so many different threats in the metagame. As a player, I lean towards offense in general, whether that be bulky, hyper, or weather. I honestly think that HO is really strong right now, not because of cawmadore specifically, but I think cawm+lucha+goltres covers a lot of stuff, so I’d say hawlucha is a great pick atm that’s a tad underrated. Outside of that, hail is obviously quite strong, and I think ferro should see some more usage as well.

I think the diversity is one of the reasons many people enjoy the tier :]
can you share a particular team you are proud of?

https://pokepast.es/7bbe46ebba23793d this team is easily the highest level of building genius I will ever reach. I built it semi jokingly for maroon for cappl, then he dominated with it. The team is pretty straightforward HO. Lead screens azelf, the matchup fish double dance miasmaw, meteor beam astrolotl to cover the sun matchup, GGWP aurumoth, tanga berry malaconda to catch dragapult uturning on it, and obviously the star of the show, Chinese clefable. What are your thoughts on this successful edition of ladder tour? What other tours are you looking forward to in the future? Any long term goals ?

I was so, so happy that the ladder tour worked out! It was great seeing so many people suffer on the ladder like you and I have. It also saw the rise of the cap god poopidoopi, which has got to be my biggest success. I’m looking forward to the next team tour, which are always the most fun, and I’ll be hosting the next SS CAP Ghosting tour, which will take place after playtest. I hope to keep hosting tournaments, eventually deposing tadasuke as a tournament host and taking all his schmeckles

mamasuke will be relieved of her son's responsibilities

what are your general tips towards getting better at the game?

Honestly, enter tournaments. It takes a couple tours of getting absolutely smacked by better players to improve. Also, team tournaments are the absolute best place for new players to learn. I would not be good at the game unless Jordy butted into all of my building sessions to call me an idiot.

What was your favourite tour experience so far ? Any cool people youd like to s/o ?

As always, I’ll shout out shsp for getting me into the cap metagame in the first place. What an absolute g that guy is. I did fairly well in winter seasonal while exclusively bringing matchup fish teams, which was funny. I also enjoyed beating Gibraltar slayer with three different rotom forms in seasonal then weather ball stratagem hail and terrain extender lele sun in Swiss.
I also really enjoyed teaming with voltage, awesome guy. Some of my favorite past teammates are quziel, tnm, snake, am, and maroon.

Thank you for this wondeful interview ! Anything else youd like to say to the fans ?

literally me in real life

Estronic said:
who is your favorite gptl that is involved in cap (answer wisely)
Click to expand...

Lumari, her contributions to the CAP process are always high quality and put the other GPTLs to shame.

most underrated mon in the meta rn?

What are some underrated and overrated mons rn in your opinion?

Will we win cyclohm cup? :flushed:

You've probably already told me but what do you study in uni and what's the best/worst parts about it?

What's the ugliest mon in your opinion?

What on earth possessed you to amqc all those cap analyses?

When are you going to rise up and overthrow Tada from every position he holds?

What's the appropriate punishment for UwUing unironically and/or posting catboys?

How do we kill waifubot?

Earthflax said:
most underrated mon in the meta rn?
Click to expand...

Ferrothorn is heavily slept on. The mon is really, really good right now. I also think SD Rillaboom should see some more play, the drop off of Tomohawk and zapdos has given it the chance to be threatening again.

Rosemary bread hands down. Goes with everything.

Rize of the Fenix, easy

you ever seen a spread invests in every stat not named ttar? Also I love that you use a -SpD nature but boost the SpD back up with the assault vest. Truly brainy.


D2TheW said:
What are some underrated and overrated mons rn in your opinion?
Click to expand...

I already said underrated, but for overrated I think water shifu is actually not that good. Running it limits your weavile counterplay, and it isn’t too hard to punish shifu. I also think buzzwole sucks ass but I think I’m just bad at using it.

D2TheW said:
You've probably already told me but what do you study in uni and what's the best/worst parts about it?
Click to expand...

I major in electrical engineering and I minor in cognitive science. For my major, I love the physics side of it, not so much the circuitry side. For my minor, I'm honestly convinced it's all good. I particularly like learning about the neuroscience behind cognitive development.

... but honestly the American university system is really fucked up.


D2TheW said:
What's the ugliest mon in your opinion?
Click to expand...

Stakataka and it's not even close


D2TheW said:
What on earth possessed you to amqc all those cap analyses?
Click to expand...


D2TheW said:
When are you going to rise up and overthrow Tada from every position he holds?
Click to expand...

This has already occurred, tada is a powerless figurehead.


D2TheW said:
How do we kill waifubot?
Click to expand...

At this point, it's already snowballed past the point of being killable. We just gotta lay over and accept it.

In terms of music taste, I really am all over the place but I definitely like Psychedelic and Folk the most.
Big time toonz guy right here:
Live Well by Palace
Lovers Rock by TV Girl
Lilly by Toro Y Moi
Suddenly by Drugdealer
Toy's Story by LAUSSE THE CAT
Green Eyes by Wavves
Roddy by Djo
No Wonder I by LAKE
Post Humorous by Gus Dapperton
Kubadiver by Zuli Jr.
Rapp Snitch Knishes by MF Doom
My Girls by Animal Collective
Sedona by Houndmouth
And I have so many more, lmk if you want my playlist

Edit: I realized I forgot my literal favorite song of all time. This has been my favorite song for about 4 years now, it's that good.
Saturday by Real Estate
Very much worth a listen.
Last edited: Sep 21, 2021