RunWithTheScizors said:
Unless someone already made this post, we have our next untiered Pokémon:

In Platinum version, all three rods can be used to catch it, so it should stay as is on the list.
Click to expand...

This Bulbapedia article says Feebas can be reeled with any rod in all 3 versions.

sumwun said:
This Bulbapedia article says Feebas can be reeled with any rod in all 3 versions.
Click to expand...

Interesting... I used this site.

Self explanatory, only gets hidden power, weak stats, loses to basically everything of the same level

Can someone explain to me why Yanma is anywhere above E other that "durr i guess it has 125 Special Attack and is BL on Smogon so it must be good"? I recently used that piece of trash and let me tell: for someone that used unown in gsc and ditto in rb, Yanma is the worst Pokémon I've ever had the displeasure to use. I'm sure that whoever made this thread never used said bug 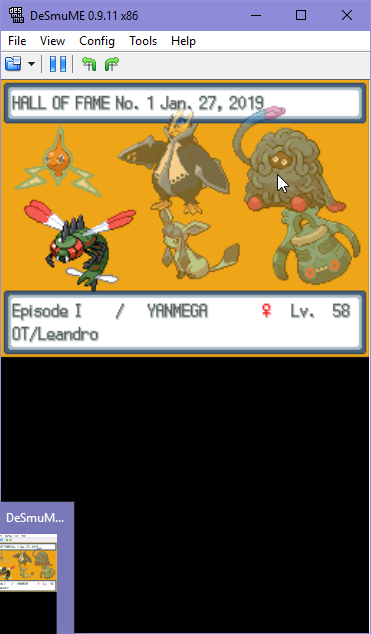 Let's go to the facts one by one that "define" a Pokémon's viability in dissecting this rotten corpse:


Conclusion: Yanmega is sheer garbage and I do not recommend anyone using it unless they REALLY want to. As this list is supposed to represent a fast run of the game, my claim still stands. On mercy, I'd say put it in E but it's truly a terrible Pokémon enough to F. If anyone wants, I may give insights on the other Pokémon or on the runs I've made in DPPt, as I disagree with most of the placements in there.

Don Honchkrorleone said:
Conclusion: Yanmega is sheer garbage and I do not recommend anyone using it unless they REALLY want to. As this list is supposed to represent a fast run of the game, my claim still stands. On mercy, I'd say put it in E but it's truly a terrible Pokémon enough to F. If anyone wants, I may give insights on the other Pokémon or on the runs I've made in DPPt, as I disagree with most of the placements in there.
Click to expand...

Interesting. As I'm planning to start a Pt run this week, I'd love to hear your thoughts on it if possible.

I've been playing through Platinum and I've been using Swinub/Mamoswine for the last quarter of the game. I would like to contest its placement in the E rank, which I find to be too low, even given that it's not available until after the sixth gym. It seems to have extremely good matchups against most lategame trainers and its 130 base Attack stat + STAB EQ and Ice Shard cannot be overlooked.

Availability: Route 217 and Acuity Lakefront, between the sixth and seventh Gyms. You'll catch it as a Swinub, which in just a couple of levels evolves into Piloswine. With a Heart Scale handy you can get Mamoswine at level 36.

Typing: Ice/Ground gives it rather poor defensive typing in many cases but an immunity to Electric. However, Ice/Ground is very good offensively because of the great coverage options it offers.

Stats: 130 base Attack is extremely good, one of the best in the game. 80 Speed is a bit low but not horrible, especially considering that Mamoswine hits fairly hard with Ice Shard. Decent physical bulk, not so much special bulk.

Movepool: STAB Earthquake at level 40 + STAB Ice Shard right from the get-go is the main bread and butter. NeverMeltIce allows a boost to Ice Shard. Mamo can also learn Rock Slide/Stone Edge via TM. Mamoswine doesn't have a huge amount of options as to moves, but it doesn't need many considering its very good coverage.

https://bulbapedia.bulbagarden.net/wiki/Mamoswine_(Pokémon)/Generation_IV_learnset
Major Battles:
Candice: Okay matchup if you have Earthquake
Galactic Grunts: Combination of EQ/Ice Shard OHK/2HK most Galactic Grunt Pokemon
Cyrus: Good against Weavile and Crobat. Can 2HKO Honchkrow.
Volkner: Generally a good matchup, but watch out for Focus Blast on Raichu and Fire/Steel moves on Jolteon and Electivire (Mamoswine can generally take a hit from the latter two)
Aaron: Ice Shard allows 2HKOs on some of Aaron's Pokemon.
Bertha: See above.
Flint: Mamoswine is able to outspeed and OHKO several Pokemon on Flint's team with Earthquake.
Lucian: Not as good of a matchup as the other E4 members, but still usable.
Cynthia: Wins against Garchomp 1v1 in many instances. Also has good matchups against several other mons on her team.

Final Comment: Mamoswine definitely deserves at least D if not C. Despite its late appearance, it has many great matchups against the fairly packed last third of the game. If one is willing to wait until after the sixth gym to catch Swinub, they will be rewarded with a very powerful physical attacker with good type coverage.

Is there a list of Pokemon that haven't been tested?

Towards the end of my Platinum run, I decided to pick up a high-level wild Tentacruel right before the Pokemon League and was quite happy with its performance. It set up Toxic Spikes against everyone except Aaron, which helped weaken some important foes like Garchomp, Magmortar, and Milotic. It was also great for baiting out Earthquake, which helped Staraptor come in for free and stack attack drops with Intimidate. Most people would probably fill that last slot with Giratina or Azelf, but I was pretty happy with Tentacruel given how little I invested in it.

If anything, I think the gap between Giratina and Tentacruel is probably too wide currently. They're fighting for the same teamslot (namely, the one that gets freed up in the lategame when you're done using Bibarel), and in my opinion, poisoning 12/26 opponents in the Pokemon League is at least as valuable as brute-forcing things with a fat, moderately strong Pokemon like Giratina. Notably, it allowed me to deal poison damage to Espeon and Alakazam while shuffling between Houndoom and Tentacruel, eventually putting them in Sucker Punch KO range. It also bought me a lot of time to heal while fighting Milotic. Tentacruel isn't as good as Giratina, obviously, but not the the extent that Giratina should be A while Tentacruel should be E.
You must log in or register to reply here.
Share:
Reddit Pinterest Tumblr WhatsApp Email Link