Heropon said:
So the streamer will soon get to Zacian, so we will finally have Zacian's base stats ?!
Click to expand...

A range, at least, when the Streamer is going to show it's stats

Elkos said:
If the speed is already +3 then it probably doesn't have Sheer Force does it?
Click to expand...

I'm definitely interested in seeing what % chance it is.

Elkos said:
If the speed is already +3 then it probably doesn't have Sheer Force does it?
Click to expand...

Wouldn't the speed likely come from its ability? Or would Sheer Force negate Steam Engine?

Rarycaris said:
Wouldn't the speed likely come from its ability? Or would Sheer Force negate Steam Engine?
Click to expand...

Bruh, two abilities on one Mon?

Rarycaris said:
Wouldn't the speed likely come from its ability? Or would Sheer Force negate Steam Engine?
Click to expand...

Oh, for some reason I was thinking of the opponent having Sheer Force. Total derp, ignore me. :p

About time I shared my thoughts on SwSh, so here we go:

New Pokemon: mostly okay with them. Not enough of them though, as expected, and not enough Galarian forms either. 23 years of Pokemon now and still no damn dolphin Pokemon? Mind boggling. Dragapult, Frosmoth, Grimmsnarl, G-Weezing and Appletun are the cream of the crop in my eyes. I also like the design of Orbeetle, Copperajah, Obstagoon, Toxtricity, Falinks and Grabbloct. Fossils are a nice concept but seriously awkward to look at. Hatterene is slowly growing on me. Others like Eiscue and Coalossal are just fugly.

Metagame: was looking like Toxapex, Aegislash and Excadrill for days, but some of the new Mons have decent/good stats and movepools. Aegislash also got nerfed. I think Ground coverage looks pretty important. Also keen to play with some cool combos using Polteageist's Tea Time, Appletun's RIpen ability, etc. Blunder Policy seems pretty broken if you just spam OHKO moves like Fissure and either KO something or get an Agility boost. You Smogon banhammers won't like that at all! And Heavy Duty Boots finally giving some Pokemon some Stealth Rock reprieve?

Graphics: pretty darn awful. Looks like a HD version of Sun and Moon with some N64 graphics splashed in here and there. Characters are blocky, foliage is meh, swimming pokemon not making ripples, drawing distance seems short and things pop out of the ground. But this topic has been discussed to death. And SOME areas do look pretty. Just not the Wild Area so much.

Animations: Yikes. At least Gamefreak are leading by example and showing the world how to recycle?

Nitpicks: Fishing for a Pokemon in a stream and then suddenly the battle screen is a dirt field with no water in sight?? Lazy perhaps?

Difficulty level: seems a little too easy with no way of turning Exp Share off. And I'm not sure I like the fact that you can't catch certain levels of Pokemon unless you have certain gym badges. Seems like it's forcing you to play very linearly. And you'd hope you wouldn't find a high level shiny!

More metagame: I’m a little concerned about the seemingly skewed weather setters for this meta. Sand gets Gigalith, Tyranitar, Hippowdon, Sandaconda. That's 4. Hail gets Abomasnow and Vanilluxe. Sun gets Torkoal and Ninetails. Rain gets.....only Pelipper?? So rain, sun and hail REALLY need some new setters if we are able to use them competitively. Especially since there are so many Pokémon in the Galar dex with weather dependent abilities. Including Barraskewda. And yes I know other Pokemon might get Drizzle but looking at the new Pokemon there's basically only 2 new water types and neither look like rain setters. Maybe something like Vaporeon will get it.

datamine seems to have started over at vp

Discord Leader
^ This. I guess the wait is over. If you can't see the previously linked mini spritesheet due to network restrictions, here's another link: 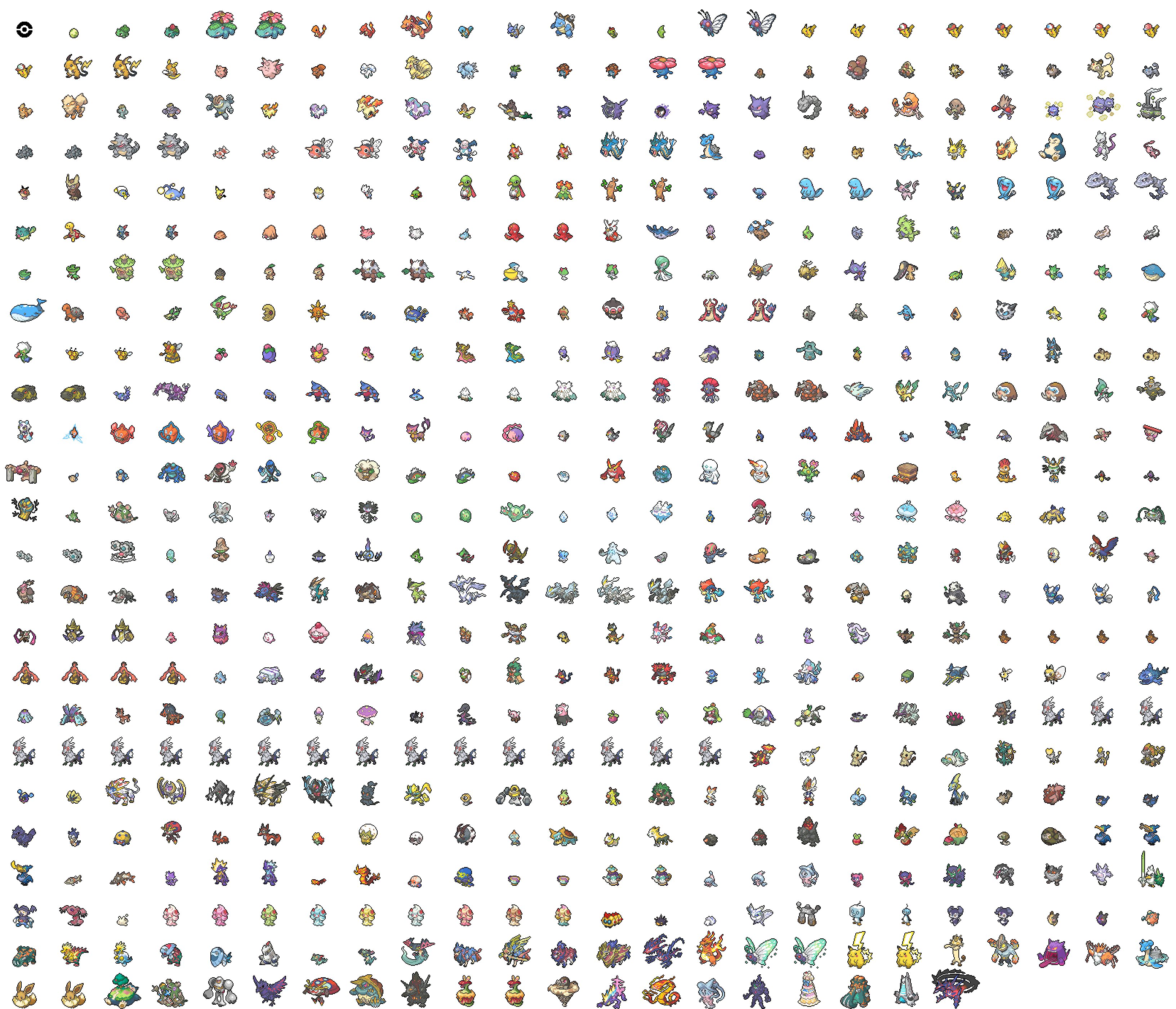 So the final dex is actually a little larger than 400, with several legendaries and mythicals being present.

The non-Kanto/Alola starters are still missing though.

So, Darmanitan's alternative form DOES have a Galarian form. Could this be Ice/Fire?

Oh cool, Melmetal did actually make it! (and has its own dynamax form apparently?) I was hoping they wouldn't leave him in Let's Go hell.

So many legendaries are back... And yet...

The mini-sprites of the Squirtle, Bulbasaur and the Alolan starter lines are also present.

Also, Necrozma and its fused formes are present but Ultra Necrozma is completely absent. While it makes sense as it needed a Z-Crystal, it's notable as it doesn't have a workaround.

And we did get another non-Gen 1/8 Gigantamax, yay?

Can we ... can we talk? So are there more Pokémon sprites then in the actual Dex?
So either post-game or/and events, right?

The broken-ass tea ghosts seem to have gender differences (two sprites each on the sheet).

BlueRay said:
Didn't some people Mew would be back? But I can't seem to find it and Mewtwo.
Click to expand...

That's right! Dunno about Mewtwo, but we KNOW Mew is going to be in the game, but it's not present in that sheet.

Siggu said:
That's right! Dunno about Mewtwo, but we KNOW Mew is going to be in the game, but it's not present in that sheet.
Click to expand...

They're both in it, look better.

Marshadow made it?! Praise Arceus! Or Eternatus? Whichever works, I was holding out hope for precisely this outcome!

Now when home comes out I can do another mono-ghost run. Yesssss.