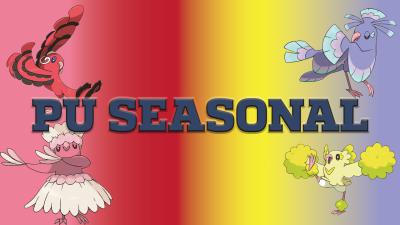 Welcome to this SM PU Circuit Seasonal! Entering in this seasonal earns you points for an overall PU leaderboard and will go towards your chances to win the coveted PU Circuit Ribbon!

kink vs toinha - kink is epic in other tiers, and has not disappointed me yet. decent edge
hamhamhamham vs HJAD - I don't have a reason to predict against HJAD yet, even though hamhamhamham will be probably as difficult of an opponent if not more challenging than jonago was. small edge to HJAD because he is the favorite still.
Pepeduce vs zben - Pepeduce is supposed to be good, and zben I just simply do not know very well. he could be good but i just do not know so, small edge to Pepeduce
LordST vs Teddeh - This is Teddeh's hardest match in his run so far. LordST has proven to be one of the best winners bracket players at this point, but being vs Teddeh makes it hard to get bolded since Teddeh is a PU open finalist. Small edge to Teddeh, but if he doesn't try LordST will exploit that and win, or LordST could just completely prove me wrong and just play better. Again though, logically Teddeh should have the edge.
Bouff vs lockjaw - I think this series will be close. lockjaw is on the pu circuit sheet with some points, while Bouff is just known to be a good player. Giving the small edge to lockjaw because he has proven tour success in this tier, but I can easily see Bouff winning too.
The Thunderbirds vs gum - I have zero reason to not bold gum here. I know gum to be one of the best players in PU, and even tho he will not agree with me and tell me I am overhyping him, it is just big facts and I think gum will be in the winners bracket majority of this tour.
Pohjis vs Skipkan - okay by far skip has had the most impressive pu seasonal run in this tour so far, beating multiple notable players. He has the small edge here even though Pohjis is pohjis. I think pohjis can win, but I cannot bold his name here since skip has proven to be the player to beat this tour. Pohjis will have a chance too if skip brings the wrong thing to win matchup-wise, as skip has been going for matchup-wins this tour. It has been working.
Raiza vs LuluDzn - I know Lulu is good, so i can definitely see this being close. However, I also know Raiza is one of the most dangerous players in the winners bracket now, and I would only bold few people over him. Decent edge here.

robjr vs Many - one of the closer games in the loser's bracket this week, I still think robjr has a decent edge as he has proven himself in the past, and also in the present by beating Rexus last week. Many needs to be on top of his game, but if he is he could cause an upset.
Lambovino vs TJ - this already happened but i would've picked this anyways because TJ is really good and has proven it this tour too.
Taskr vs PTF - I love PTF however he got the best player in the loser's bracket, Taskr. I fully expect Taskr to go to at LEAST semis in losers bracket, if not farther.
tlenit1 vs vaboh - yea tlenit1 will be more likely to win this he is too good , there are a couple people I would bold over him but not vaboh. pretty strong edge.
Megazard vs randomnick - Megazard brought heat and played well last week, i expect great things
zoowi vs (nichiru vs yandaud) - small edge to zoowi, i'm fought him a couple times and have been impressed
Sensei axew vs hjhjk - Sensei has been working really hard this tour and from the games i've played with him he should have the edge here. I hope to see Sensei Axew go really far this tour.

good luck to all!

So drops just hit and some stuff moved around. This round will be based on the previous meta before the shift, so that means including froslass and quagsire while excluding torterra.

Please play all matches in the Gen7 UU format to accommodate. You can expect that the drops will be legal in the next round.

great games man, i hope u make a strong run

Won in three good games against my good friend Taskr.

we live because we were born and haven't died yet

I won in three games vs Pohjis, with luck on my side g2.

Won in 3 ggs, i battle in smogtours, the replays are public anyways