Moderator
Hey pals, today I wanted to take an honest look at the structure of CAP's team tournaments, and open up discussion regarding the policies surrounding them. As of now, I don't believe there has been any serious public discussion on this topic, so by breaking new ground we have a lot of room to work with in terms of innovating and solidifying a coherent structure for CAP's team tournaments.

The main issue I believe merits an extensive discussion at this time is that of CAP's winter team tournament, the CAP Snake Draft. While I want to be explicit in saying we don't necessarily need to replace it at all, I want to open up discussion on whether or not the community would like to see it replaced with a different team tournament format this year. This is prompted by Smogon's official tournament scene ditching Smogon Snake Draft and replacing it with the Smogon Champions League. Since CAP is unaffiliated with official Smogon metas, this shift isn't necessarily a mandate for how to run our own tournament policy, however, after speaking with many of the managers for last year's CAP Snake Draft, it appears there are some glaring issues with the nature of the format itself. The most notable of those issues is the incredible amount of luck that impacts drafting strategies. Managers have no control over their placement in the draft order, and with the fact that Snake Drafts simply allow the manager to pick a player without any form of bidding, drafting a solid team often comes down to luck of the draw. It can be argued that the increased level of nuance involved with auction-based drafts would be preferable to something with a lower skill ceiling like Snake Draft, since managers have more room to make intelligent decisions and be rewarded for them. With this in mind, I'd like to open up discussion on a few paths forward from here. Keep in mind that this is not an exhaustive list, and if you have a different idea or any sort of amendment to make for items on this list, please let us know in this thread.
As I said before, these are only a few of our options moving forward. Please feel free to voice your support for any of the above formats, or suggest an alternative course of action. I'd like to keep discussion on this open for a week, assess the community's consensus, then proceed with a more in-depth talk about how to put our plans into practice.

Moderator
Throwing some support behind a standard auction. Hybrid doesn't really appeal to me all that much or all that well: it strikes me as still having a lot of the issues with the initial snake draft format I'd prefer we get away from, and I'm not sure how the auction phase plays out. If there are examples of drafts that have been done like this, I'd be really curious to see them. World CAP would be incredibly fun, but I'm far from sold on trying to set that up without a really solid prep phase- what teams are included, getting an idea of how many signups from what areas, what teams would have prospective managers and the like. I'm not opposed to the idea, but I'd imagine its the most work of the possible options. A regular auction, though a bit more bland, is a tried and true idea that enables the formats themselves to be more of the centerpiece, especially as I support the proposal to focus more on less developed or less common metagames than the traditional ones (SM) in CAPPL.

This isn't gonna be formatted too greatly because I'm burned out from writing 5 analyses and 3 college essays.

Gonna start this off with the ideas I am opposed to: I vehemently oppose World CAP because of a lack of players. The format that best suits World Cup - whether it's all CG or a mixture with Old Gens is to have pools, and quite honestly, I don't think we could even fill up 6 complete teams. India, Latin America and the East/West US could compete no problem, while Europe is in an odd position of either playing for Team France and excluding everyone else (this is assuming Jhoffler and Jordy don't come back from the dead yet again). This also leaves Australians outside of the tournament as well as any other odd countries - if someone is from Asia and/or North Africa, what then? Surely, a plan to connect the countries could work, but then you still can't connect everyone. I can think of 2-3 Australians who would be willing to play and could connect with the side of Asia, but assuming we add 3 SS 1 SM 1 ORAS 1 filler slot or just 8 players, you still need at least 2 subs; every country cannot produce 8 players that have to be spread between 4 tiers (read: gens if need be). The very short notice means that you can't even assemble players from outside the tier's constraints.
ANOTHER HUGE PROBLEM is the existence of superteams. Say I make a team of Europe and the UK lads are allowed to join because, well, they wouldn't be able to play otherwise. In this scenario, France is its own team so Atha, Maxouille etc are doing their own thing. I now am able to run TNM/Jordy/Offler/stresh as a core and have 4 wins guaranteed every week while I ride the bench. Even if I were to then get some lesser known players who I just hand teams to, having 50% of the team tournaments be decided by something not even the TDs can change is not fun in the slightest and demoralises the playerbase in the long-term. This would make an already heavily imbalanced tour even less fun if you can't play for a team and/or you get smashed early on.
Snake draft is also out of the question for me. We all saw how big of a failure this tournament is, shafting most players that find themselves in the middle as they have to settle for 1st tier players that the first two managers didn't get but can't double down like the last pick does and pinch the pool. OU and the other main tiers dropped it off because managers could avoid self-buying and then uncontested buy the best players no matter what - CAP has an even smaller pool of players, so if 6/10 best players sign-up to manage and then NONE of them buy themselves, it means first pick is impossibly strong. Last year's Snake had some managers trolling and we still saw how flawed the system is. No more.
No lie there is 24 pages linked by Tada and I refuse to read a single word, but I saw the word "TRAPS" capitalized so whatever format that is, I'm behind it.

I don't want to have the two tournaments be the exact same but with a slightly different coat of paint in the form of what tiers are being played, but I wouldn't complain if we did another standard auction draft tournament. It's used a lot because it works. But for me, Hybrid draft is where it's at as it combines the positive aspects of snake (doing your homework and finding a hidden gem) and standard auction (keeps you on your toes).

Thank you for your time, if you'll excuse me I'll go back to using an abacus to figure out how we can min-max the stats stage.
Last edited: Thursday at 9:18 AM

This is gonna be a three-liner so forgive, but a standard auction CAPPL-style tournament seems ideal. There is a reason why the PL tournaments are so popular, and at this point I don't see much merit or enjoyment from mixing it up for variety's sake. I think with smaller playerbases like CAP, these kind of team tours are just more fun and develop the meta better.

I’m gonna play devil’s advocate here a bit and say that we should keep Snake Draft. While I don’t think that transitioning to two auction drafts is by any means a bad thing, I think that the snake draft format uniquely gives opportunities to newer players due to less static teams. What I mean by this is that the snake draft format encourages team diversity by increasing the chance people don’t just get the same friends on each team. It’s kind of a weird thing to advocate for, but I don’t think I would’ve gotten a chance to play if the first team tour I signed up for was CAPPL as opposed to Snake Draft. Snake Draft is inherently a more friendly format to new players.

I’m not opposed to changing it to another auction draft, however. I think the average quality of each team is higher with an auction draft, and it definitely results in more “balanced” teams. I don’t see too much wrong with changing it, though I would prefer to keep Snake Draft.

I think I differ a bit in saying that the World Cup format is probably doable. Every team tour attracts people from outside the community to play in it, and the same would probably be true of World Cup. I still prefer the other two options, however.

oh, i'm in a field of dandelions

dex said:
very team tour attracts people from outside the community to play in it, and the same would probably be true of World Cup.
Click to expand...

The argument that we don't have the playerbase for WCAP is pretty shortsighted imo. WCs tend to attract a ton of players outside of the tier itself; you usually need only about 2 or 3 mainers to form a legitimate team (see: basically every PUWC team, LCWC Italy, East, and Brazil). To show that we do in fact have the playerbase to at least somewhat make a WCAP work, I made this very clean graphic that divides the Swiss R4 players into possible WC teams. 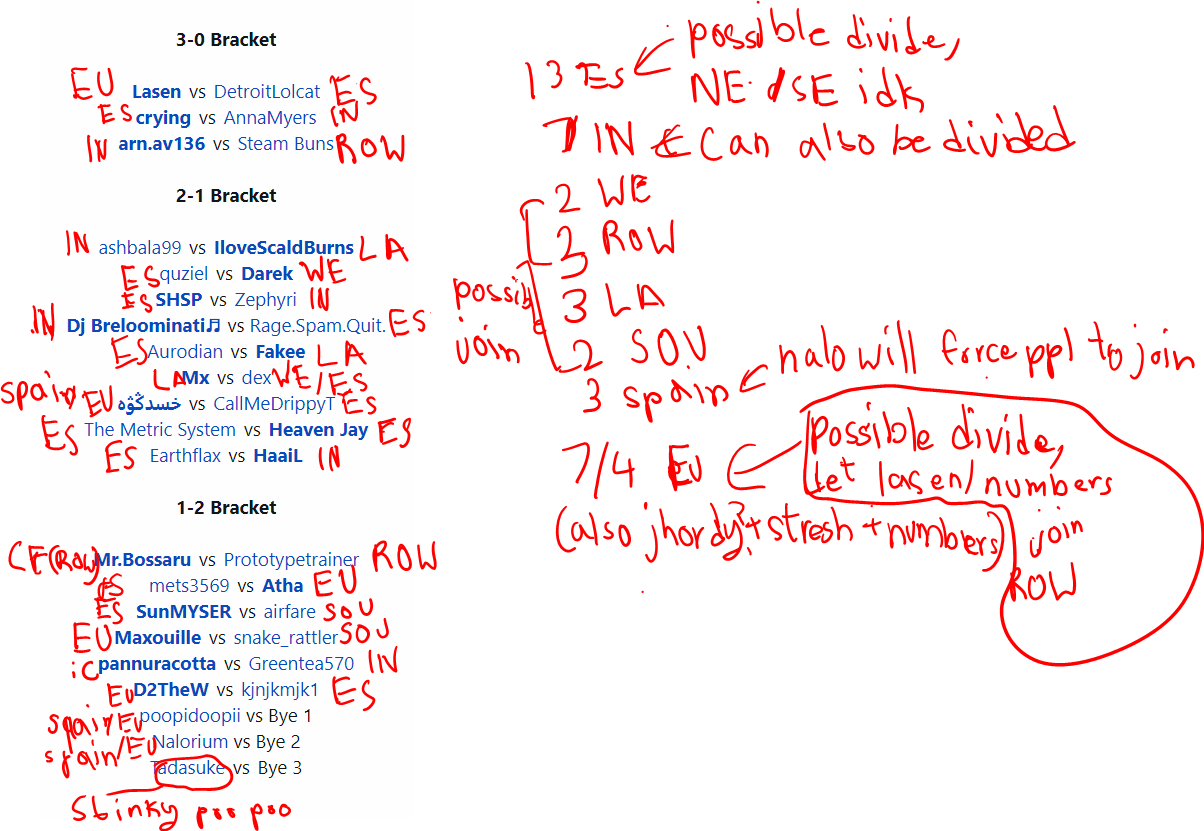 ES=US East, IN=India, WE=US West, LA=Latin America, SOU=US South, Spain=Spain, EU=Europe
The graphic above shows that making somewhat competitive teams for a World Cup is possible, at the very least. However, if this isn't enough to convince the community that a WC is feasible, I strongly advocate sending out a WCAP survey, similar to this census survey created by the 1v1 community, in order to gauge the practicality of a WC, based on hard facts.
Last edited: Yesterday at 12:49 AM
You must log in or register to reply here.
Share:
Reddit Pinterest Tumblr WhatsApp Email Link