Hello guys! I have really wanted to make a good OU team for a long time and after months of failing to do so, I think I finally built a decent one. I wanted to build a rain offense team with the addition of Mega Pinsir since it breaks down many of the archetypes that shut down rain teams such as Ferrothorn, Chansey, and bulky waters. Most of the other members of the team are rain team staples but all of them including have also been very useful. So, here goes the team!

Politoed @ Damp Rock
Ability: Drizzle
EVs: 248 HP / 164 Def / 96 SpD
Calm Nature
- Scald
- Toxic
- Encore
- Rest
What's a rain team without a Politoed? The MVP of my team, one of the strategies involving my team is to preserve this Pokemon to make the most out of Rain. Rest is for longevity as it is the only recovery it has. Toxic for bulky mons as well as those pesky Rotom-W that switch in.

Ferrothorn @ Leftovers
Ability: Iron Barbs
EVs: 252 HP / 88 Def / 168 SpD
Relaxed Nature
IVs: 0 Spe
- Stealth Rock
- Leech Seed
- Gyro Ball
- Power Whip
An incredible defensive supporter, it as a lot of tools in its arsenal. It sets up rocks for my team, pivots on strong physical attackers (with an Iron Barbs bonus damage), and whittle down bulky opponents with Leech Seed. Gyro Ball and Power Whip damage what it needs to, though I think Power Whip can be replaced.

Tornadus-Therian @ Life Orb
Ability: Regenerator
EVs: 76 Atk / 216 SpA / 216 Spe
Naive Nature
- Hurricane
- Superpower
- U-turn
- Taunt
Tornadus-T is powerful threat in the rain team. Perfect Hurricanes are awesome to spam. Superpower for Chansey and Tyranitar. U-Turn and Taunt are very cool as usual. I really like this guy as I can also use him as a lead to prevent that predictable Politoed lead as well as preventing sweepers to set-up and hazard setters to do their job.

Kabutops @ Life Orb
Ability: Swift Swim
EVs: 252 Atk / 4 Def / 252 Spe
Adamant Nature
- Waterfall
- Stone Edge
- Swords Dance
- Aqua Jet
Here goes my rain sweeper. It only shows up when the oppoing team is worn down and it has all the tools to do it. I've experienced a lot of success with Kabutops as its power and speed are incredible under the rain. I'm very tempted to put Rapid Spin here for Mega Pinsir but Swords Dance is awesome and I'm never willing to give up Aqua Jet.

Pinsir @ Pinsirite
Ability: Hyper Cutter
EVs: 252 Atk / 4 Def / 252 Spe
Jolly Nature
- Swords Dance
- Return
- Close Combat
- Quick Attack
The star of my team and I love Mega Pinsir. Without it, it feels like making just another rain team. As said before, Mega Pinsir is a fantastic wallbreaker. Not only that, I've also experienced my Mega Pinsir sweep the opposing team even before Kabutops has a chance to come in thanks to Swords Dance and Aerilate Quick Attack. The only downside for this guy is its double weakness to Stealth Rock.

With this team, I made it past the 1695 OU benchmark for the first time which is pretty much an achievement for me. 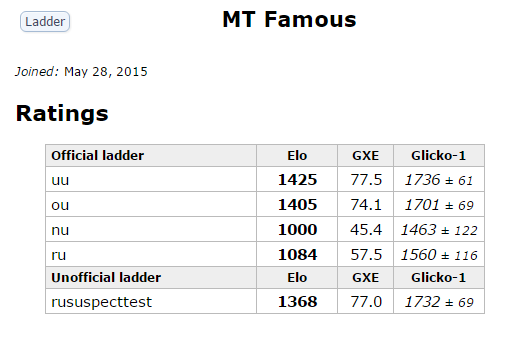 Threatlist
Hazards: Without any form of hazard removal, Mega Pinsir is very weak to it limiting the number of times it can switch it.
Rotom-W: This pesky guy keeps on getting free Volt Switches on my team. With resistances to Water and Flying moves, this guy has a lot of opportunities to come in on my team thanks to its good bulk.
Thundurus: Although Rain-boosted Aqua Jet can take this out, priority Thunder Wave is just an slap to the face to my offensive mons.

Thanks for the read guys and I hope you can rate it. I want suggestions especially on the hazard removals (everything seems too good to replace). I will accept all suggestions and I wish all of you a pleasant day!
Last edited: Oct 3, 2015

Use rapid spin over sd on kabutops. Not the most reliable spinner, but it's still something.

hi, nice team. The first thing I noticed is the fact you're running a rain team with Tornadus-T + MPinsir which is quite unnecessary because they both fill similar roles (smashing opposing rain checks like Venu / Ferro) and so I recommend changing Tornadus-T to Latias. Latiashelps with Electric types and Charizard Y should it get sun up against your Politoed pretty much forcing you to sac something everytime, this also lets you keep SD Kabutops as your main late game cleaner and it brings Healing Wish support to your team which is really appreciated by Rain mons because they can be pressured really quickly. Another change I would make is Chople Berry > Leftovers on Ferrothorn as this provides a well needed Mega Alakazam check that lures it in thinking it can pick off Ferrothorn for free, because Mega Alakazam is a huge threat to rain teams because of its ability to Trace Swift Swim and outrun your entire team, while also being able to nearly OHKO everything apart from Politoed, which can only fight back with a weak Scald.

That's all and I hope I could help!

Latias seems like a neat idea especially with Defog there to aid Pinsir as well as having another Volt Switch resistance. I gotta give it a try. Thanks for the suggestion! :)
You must log in or register to reply here.
Share:
Reddit Pinterest Tumblr WhatsApp Email Link