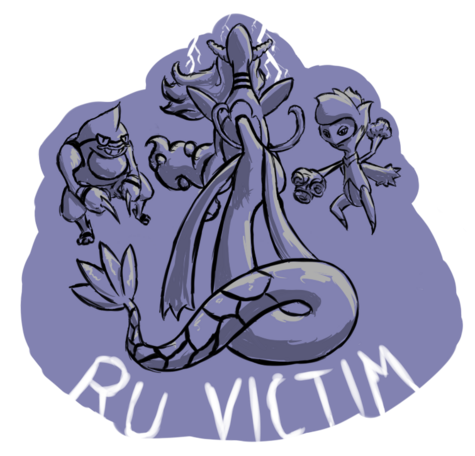 Metagames are dynamic, ever-changing, and constantly subject to change. However, there are always key Pokemon which must be prepared for and acknowledged during team building. This project is a great way for the community to come together and find ways to tackle these threats and develop a greater understanding of the tier as a whole.​
Rules:

1. When nominating your check/counter please take into consideration this defintion from The Smog:

Pokémon A checks Pokémon B if, when Pokémon A is given a free switch into Pokémon B, Pokémon A can win every time, even under the worst case scenario, without factoring in hax.

Pokémon A counters Pokémon B if Pokémon A can manually switch into Pokémon B and still win every time, even under the worst case scenario, without factoring in hax.

There are some parts of those definitions that may be confusing to the unfamiliar, so now I'm going to make sure we're all on the same page. "Hax" does not mean cheats or codes used to win. "Hax" means, loosely, things that have a chance of happening but usually don't, for example, critical hits (under most circumstances), Ice Beam freezing, and Fire Blast missing. This means that we don't take into account these types of things when we analyze if one Pokémon checks or counters another. Despite this, it's unwise to declare that one Pokémon checks another when the victorious Pokémon relies on hitting Focus Blast three times in a row, or something like that. Basically, you're often okay ignoring hax unless something that doesn't have a high chance of happening must happen in order for a Pokémon to check or counter another.

There are some things, like flinching, which you would normally consider to be hax but aren't always so. For example, Jirachi has a 60% chance to flinch a slower opponent with Iron Head, so in this case, flinching is not hax because it happens over half the time. For things such as missing or secondary effects, such as a Scald burn or Special Defense drop from Seed Flare, that have a decently high chance of happening, you need to think about them when you analyze checks or counters. Even though they might fit the standard definition of hax, they happen often enough for you to expect to see them in real situations somewhat commonly. There's no official or best guideline, but in my opinion, if some form of "hax" has a 30% chance or higher of happening, you should keep it in the back of your mind because it's not a negligible occurrence.
Click to expand...

2. You may NOT post Shedninja
3. Only post sets and Pokemon viable in RU. Try to stick to Pokemon on he Viability Rankings, however exceptions can be made on rare occasions.
4. Reservations are allowed, however if you don't complete your post within 24 hours someone else is free to take your Pokemon.
5. If someone posts an unviable set / mon, do not reply to their post. If someone does this I'll take care of it.
6. Post calcs if necessary.

Standard LO Shaymin as a Counter, it's able to switch into Milo for completely free, guaranteed OHKOing it with Seed Flare after SR while being able to heal off any chip with Synthesis and take away a possible Scald burn with Natural Cure if it switches out.

gravity is a theory

comfey comes into any move, cms on its face and taunts it so it can cm more times bc scald does 0 at +1 and more. it also comes with the benefit of being an incredibly cute mon.

Doesnt need alot of explanation tbh, since milotic doesnt have icebeam, M Amphy can switch into scald freely and tbolt is 2hko guaranteed and has a 50/50 roll while rocks are up.

Gets free recovery on Scalds to keep healthy after LO recoil and keep pivoting on the match. Also it pressures Milo + Lix cores and has a very good speed tier.

Roserade can reliably switch into Milotic's only attacking move and easily outspeeds and OHKOs the spread posted with Leaf Storm with no prior damage, as a bonus, it can run Natural Cure to cure any potential Scald burns, or use Milotic as Spikes fodder.

Metagames are dynamic, ever-changing, and constantly subject to change.
Click to expand...

"Metagames are dynamic, dynamic, and dynamic"

Jellicent counters as it outspeeds and taunts, and cannot be touched thanks to water absorb. Might not kill right away but will get there eventually.

It's pretty established by now that the standard trapper araq set designed to trap bulky waters loses to the most common bulky water, Milo, due to lack of PP and thus the best you can do is just web it. Not anymore.

Tsareena can come on scald taking around 17% and knock off Milotic's leftovers. Synthesis provides Tsareena with longevity, allowing it to check Milotic throughout the match and stay healthy. With Power Whip being boosted by Meadow Plate, Tsareena can OHKO Milotic and even if it gets burned it still can 2HKO Milotic.

• you guys have a week to post your submissions •

gravity is a theory

comfey is able to switch into any move at full health (though keep in mind ssss has a small chance to ohko after rocks) and scare it out with draining kiss (cause you recover more damage than noivern does with regular hurricane) or even use it as setup fodder. additionally, by using this pokemon over other noivern counters, you ensure your team always wins the cuteness contest.
Last edited: May 5, 2018

Choice Scarf Tyrantrum functions as a good offensive check, as it outspeeds and KOes Noivern with three of its four moves and can even handle a Supersonic Skystrike if need be.

M Amphy is a good offensive check to noivern, gets guaranteed kills with dragonpulse and can take hits if its necessary.

Porygon 2 can tank all Noivern's attacks pretty well. Even if it can't recover(when Noivern uses Taunt), one Ice Beam is enough to defeat Noivern.

One of a couple mons faster than Noi naturally and resists its main flying stab while easily OHKOing.

• you guys have a week to post your submissions •

Outspeeds and OHKOs with Hurricane, most Virizion can do is 2HKO with Stone Edge which gives Noivern a second chance to OHKO if it misses the first time.