This thread is for those who have earned a COIL rating of at least 2900 in at most 70 games on the Monotype suspect ladder to post evidence of their reqs so that they'll be eligible to vote on the legality of Magearna once the suspect period is over.

To show your reqs, please take a screenshot including the following things:

If you take a large screenshot, please put the image in hide tags to keep the thread clean.

Do not send your vote until after the suspect ends. You will be tagged at that time.

In the midst of Orre

s/o to Bondie for making the laddering sessions entertaining as hell; we're still both washed up though lol Thanks to harpreet for making this fun. also vincune meta is disgusting

no light at the end of my tunnel

Confirming as The Ozarks

Too much hax on ladder :/

https://prnt.sc/g6f9gv For some reason my computer covers up some of the top half of my screen

Confirming as Flying ain't a joke

Got #1 in this Suspect and the Medicham one. #1TrueCrew 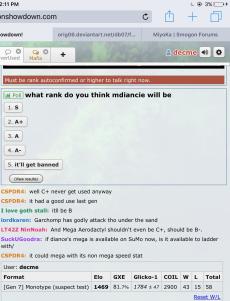