When the pot calls the kettle black it doesnt mean the kettle isnt in dire need of a clean.


Tobes said:
You don't get to complain about degenerative diseases when you've been so cancerous these past few months.
Click to expand...

Like for instance, I think we could definitely just dump the term "cancer".

Also kinda wanted to add that absolutely the hardest time to deal with the RNG is after you've been on a roll and then you go through a shit period.

Rooting for Soulwind cause of how he's smashed the rby in the last two rounds.

Lavos said:
This community is infected to its roots with a degenerative disease that grows stronger over time but stops short of killing its host.
Click to expand...

...though I actually feel sorry that Roro winning would mean SW losing again but I guess that's what happens when two great players clash.

Dreams are born from chaos.

Get that trophy Roro!

Roro you can do this!

Lavos said:
The foulest insults you hurl with intent to wound will calmly settle at the earth before my feet, and the venom you spit will bring all the pain of a warm summer breeze. You are less than anything you can conceive, while I carry on, brimming with joy distilled from detachment.
Click to expand... 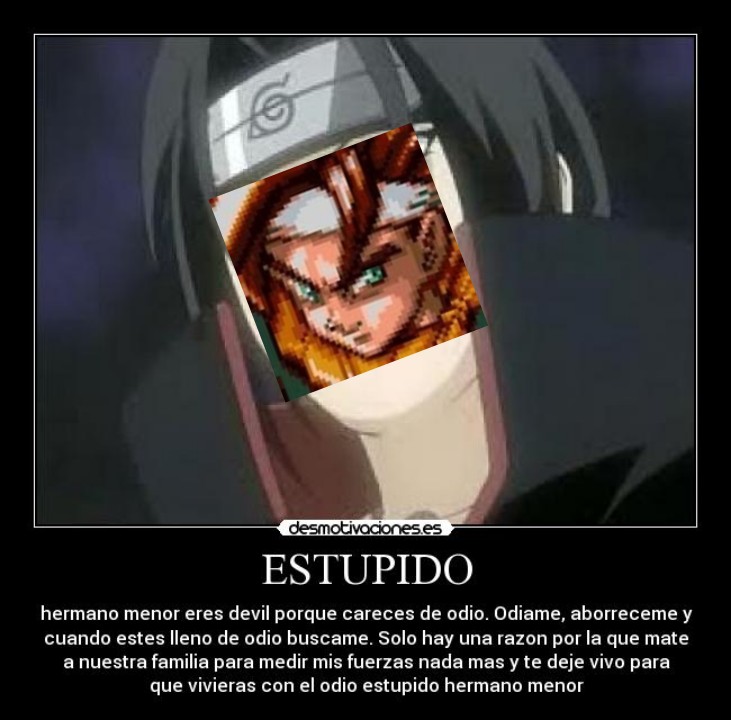 RoA Leader
Just wanted to say that those semifinals games were of excellent quality -- very well played to all four of you. The last couple games of the Lavos McM series were kinda lame but it happens sometimes. Pretty much every other game was great, especially the GSC. ABR v SW was great too. Hoping the finals are just as good!

Lavos said:
"Unfortunate" doesn't begin to describe my series, this game rewards blind luck and nothing else, I am beyond convinced at this point. After getting completely tooled by scheduling with my opponent changing times on me last minute and refusing to provide confirmation prior to the day of the match as to play times, losing this way somehow felt even worse than I had thought possible. My preparation was superior, my play was superior, and I lost, so I don't see a reason to continue engaging in an activity where what is within my control is overwhelmingly outweighed by what is not.

I am done with competitive Pokemon, and you won't get a fond farewell. This community is infected to its roots with a degenerative disease that grows stronger over time but stops short of killing its host. Tournaments used to have a competitive spirit at their heart, this has been transplanted and replaced with an artificial organ that feeds on vitriol and mockery from insecure little boys that heckle by the sidelines and tear each other to shreds over scraps of attention. The environment we fostered has trapped us all like this in a vicious cycle, and escaping it requires acceptance of the harshest reality we all scramble to explain away, that none of the countless straining efforts we put ourselves through here will ever amount to one single shining glimmer of significance. I would make this the end, but World Cup is still ongoing, and I would never leave so many great friends out to dry, so I'll suffer through a few more games for them.

One last thing before I leave you all to react with disdain, ridicule, and self-righteous fervor, before you do everything in your power to minimize my words and thoughts, box them up and shove them to some cobwebbed corner of your memory, and hope they disappear forever as a stain on your finite time ground to dust. From this moment on, nothing you say matters to me. The foulest insults you hurl with intent to wound will calmly settle at the earth before my feet, and the venom you spit will bring all the pain of a warm summer breeze. You are less than anything you can conceive, while I carry on, brimming with joy distilled from detachment.
Click to expand... 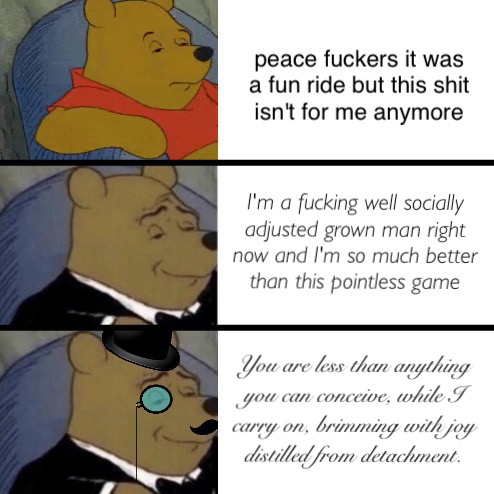 Lavos said:
Tournaments used to have a competitive spirit at their heart, this has been transplanted and replaced with an artificial organ that feeds on vitriol and mockery from insecure little boys
Click to expand...

what is this even supposed to mean LOL

TheJ3estPenguin said:
what is this even supposed to mean LOL
Click to expand...

the man has attitude issues and I understand people who dislike him, but he's not exactly wrong. we're watching a top 4 of absolutely insane quality and there's approximately five people acknowledging that and celebrating all the absolutely insane players and games vs. a couple billion jumping on the latest memeable event - his own post in this case.

you can be the best ever and people will still immediately flick from "wow you're literally the best ever good work" to all out clowning on you as soon as you put a foot wrong. there's a fuckload of criticism from every possible direction when you're under the spotlight, this community genuinely doesn't make it easy to be at the top because you have hundreds of randoms watching every move you click and ready to leap at the chance to call out your misplay. I don't blame the guy for having a breakdown, it's stressful. You can pour your heart and soul into a tournament, get 44 points in cups, go out in semifinals 3-2 due to poor luck, and the amount of people who will openly appreciate your performance is still a drop in the ocean compared to all the randoms who will laugh at you. Even the winners get uninspired gassing much more often than they get sincere congratulations. People don't spectate pokemon out of love for the game anymore, they spectate pokemon for the drama between the players involved. And Lavos gave you drama alright, I hope you're happy with the forum likes you all earned from it, to some they're worth more than witnessing the best games of GSC this community has ever seen.

Of course, this post is massively hypocritical of me, as is Lavos's. Neither of us are known for being particularly respectful or positive. But the point stands, doesn't it? Wouldn't this community benefit from having more genuine positivity and appreciation towards all of its great players? Let the plays do the talking rather than the people, celebrate the winners rather than making fun of the losers. Posts like Earthworm's are great to read.

SoulWind, you're fucking amazing. It was a joy to watch you in SPL9 and it was a joy taking absolute hands from you in some RBY Cup a year or two back, I was stunned by how good you are at the tier despite not playing it all that often. You have given me more than a few great moments on this website and I always look forward to watching your sets. Thank you.

McMeghan, your attitude is genuinely inspiring - you've given me a lot of open and sincere appreciation throughout SPL10, completely unlike any other interaction I've had on this site before, and your winpost for these unfortunate semifinals was as graceful as it could be. If I behaved like you do I'd he a lot happier, and if everyone behaved like you do, this community would truly be a better place. You're an incredibly gifted player as well, please keep doing what you're doing.

ABR, teaming with you on my first ever official teamtour influenced me heavily, I owe so much of how I handle self-analysis and self-improvement in this game to your philosophies, and I really respect the confidence in backing up all of your beliefs - some of which I disagree with, but that's only natural. Your SPL9 is still the best individual effort I've ever witnessed in this game, the amount of behind the scenes contributions that you gave to the team deserves so much recognition. You're a true pioneer and champion. Thank you.

Lavos, it's a shame that it had to end like this. I understand and empathize with you. You're one of the most talented players I know, not even just in pokemon, and it's sad losing such an incredible element of the tournament community - not that I can blame you for choosing to do this. I hope that wherever you go you can find mental peace and an environment that allows you to improve on your attitude. Thank you for demonstrating just what level of consistent dominance people can achieve when they combine talent with hard work - as far as I'm concerned, your name is permanently engraved in smogon history as one of the best.


Thank you for the incredible show so far, not only to those four, but to all 16 playoff participants, this was hands down the best playoffs of any individual tournament I've seen yet. Hoping the final lives up to the rest of the tournament.

I wanna throw up whenever I see the words ‘competitive’ and ‘Pokémon’ used in the same sentence.

Rooting for McMeghan. Oddly enough, I’d like to see SoulWind get over the hump and win it all too. Sucks to know that I still have a heart.

this thread is one of the saddest displays i have seen
i too have seen lavos say bad things on the tournament server
but maybe instead of spreading more toxicity we should reflect on what he had to say?
even if he was part of the problem does that make him any less right?
why is the first reaction to kick someone while he is down?
why not try to break the cycle?
behind every screen is a real human
my words might not mean much
but i hope that people can see what they are becoming
goodbye lavos thank you for the excellent games

Rooting for the one who ended lavos.

Amaranth said:
the fact that one of the best players in the history of this website just had a big mental breakdown and everyone's immediate reaction is to clown on him rather than appreciating what he has done for the game is probably what that means
Click to expand...

How many of us have actually "done [anything meaningful] for the game" anyway? Lavos hasn't done much, he's known primarily simply for being a good player of multiple generations and he's always been a bit of a pompous jerk about it to boot. He brought this on himself.

I've been doing this shit since dude was in diapers, never given a shred of the respect he was anointed with despite my consistent... well, at least above-averageness if not greatness (from being Top 4? in CLST/Sneak 1 15+ years ago to even recent SPL/WCoP play), and you don't see me doing much more than being aggravated at the game itself for cursing my RNG. People just kinda suck in general even before you throw in the competitive aspect, which inherently pushes people toward being combative instead of supportive of and cooperative with one another, and yet this community doesn't even register on my radar of worst competitive gaming communities. There's no point in complaining. That's why I primarily talk myself up instead.

Lavos needs a therapist yo, get well soon.

it is honestly impressive that your post about lavos was almost only about yourself.