After 2 months of several hours of Pokémoning, we get to the part everyone has been waiting for. First of all, I'd like to thank our hosts and sheet helpers (especially emma) that made this tournament run as smoothly as it did. I'd also like to thank Brumirage for taking up the art for these playoffs and flawlessly killing it.

My congratulations to everyone who actually made it! Boomers and zoomers alike, you have done quite an amazing run and you should definitely be proud of it. If winning the prestigious pink trophy isn't motivation enough for you to win the playoffs, we are also offering (courtesy of Zarel) the winner a pick of either a custom avatar or the ability to claim an inactive PS! username.

Last but not least, if you are unfamiliar with Smogon Tour's format, from this round forward each pairing will face off in a best of three series in the SS, SM and ORAS tiers. The higher seed picks the first tier that will be played, with the loser of the first game picking the following tier. Win 2 out of 3 and you are one step closer to being crowned the winner! 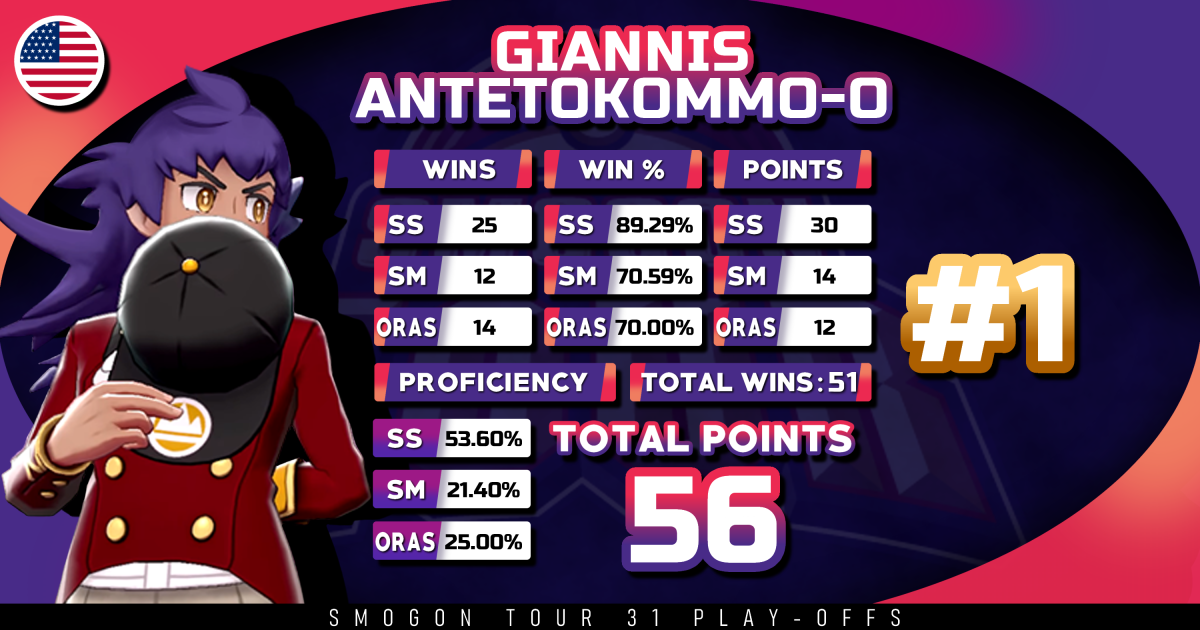 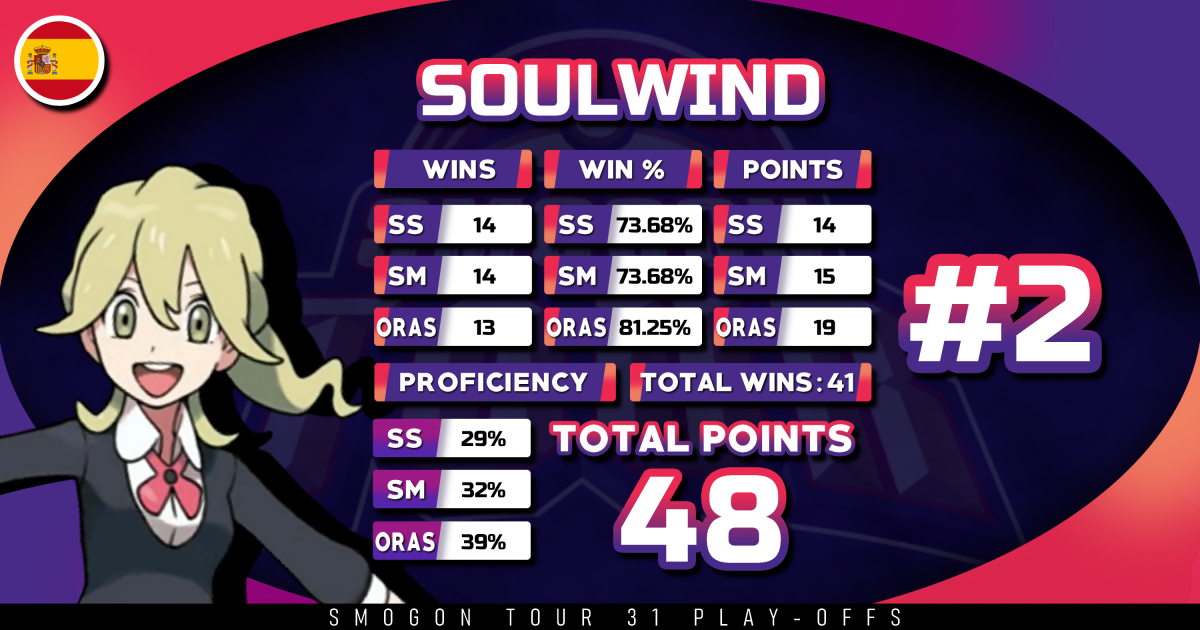 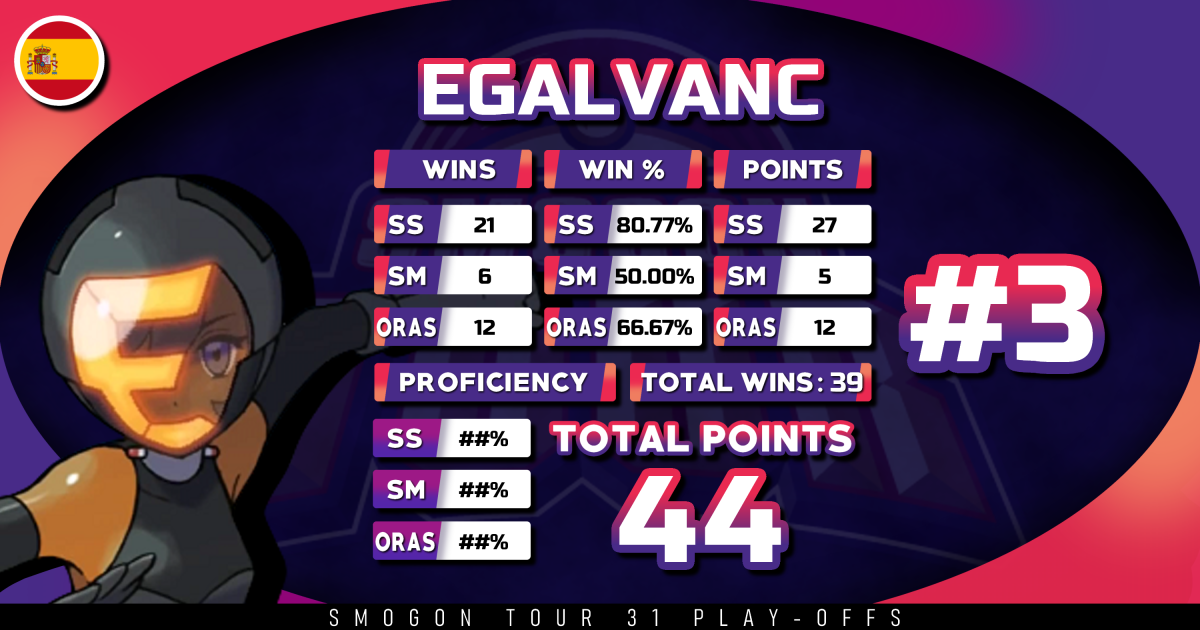 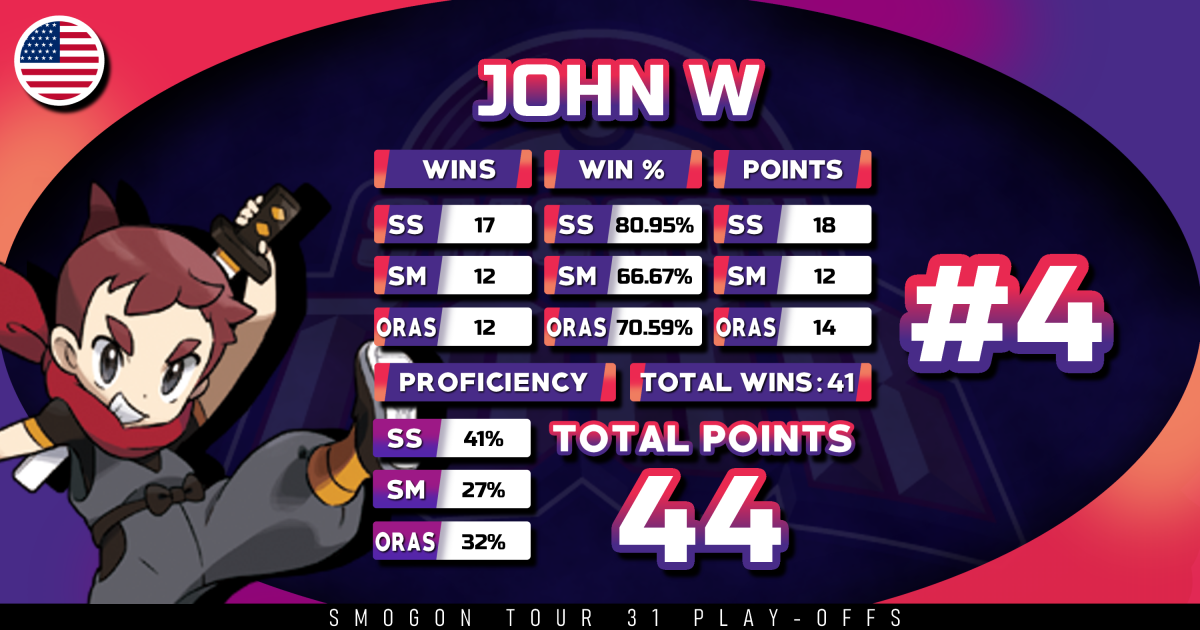 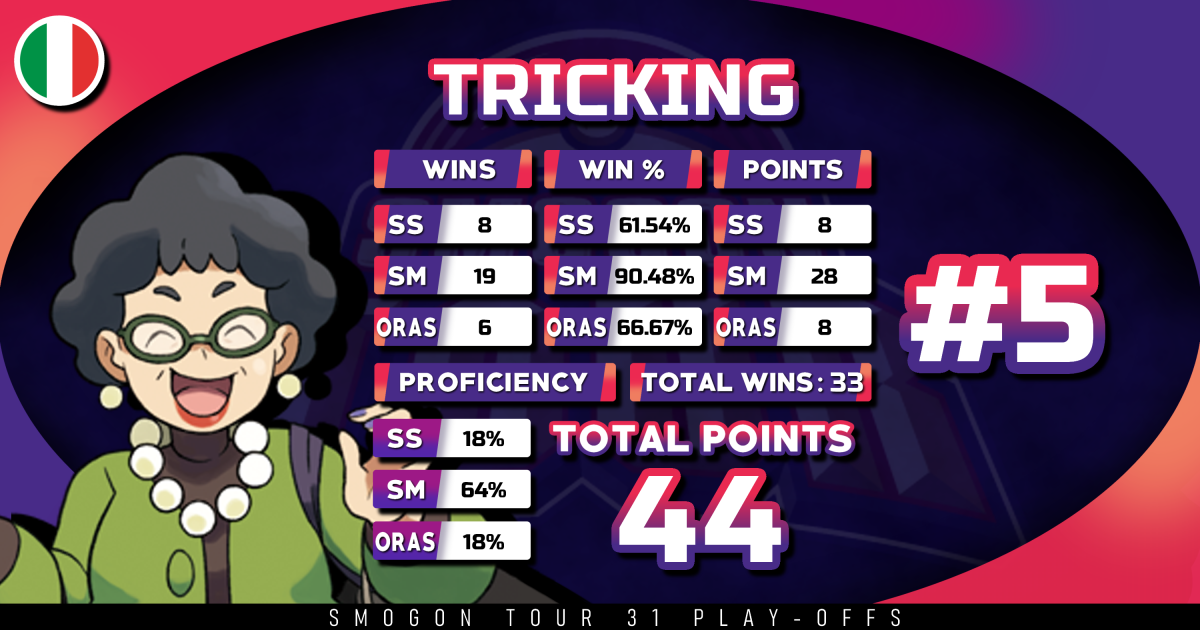 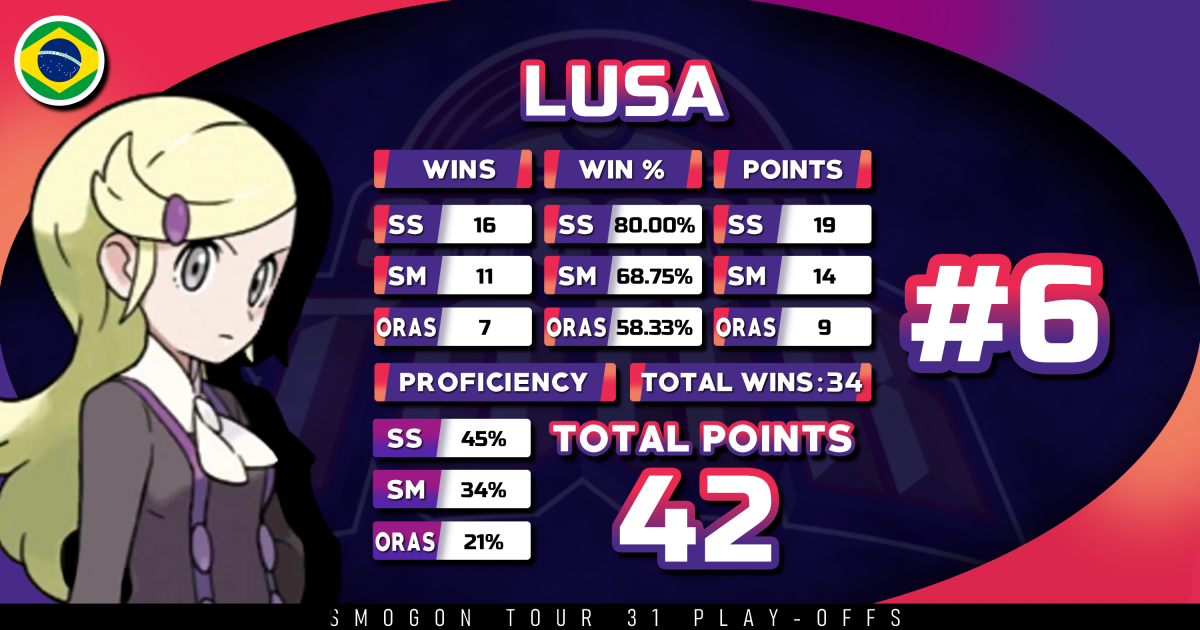 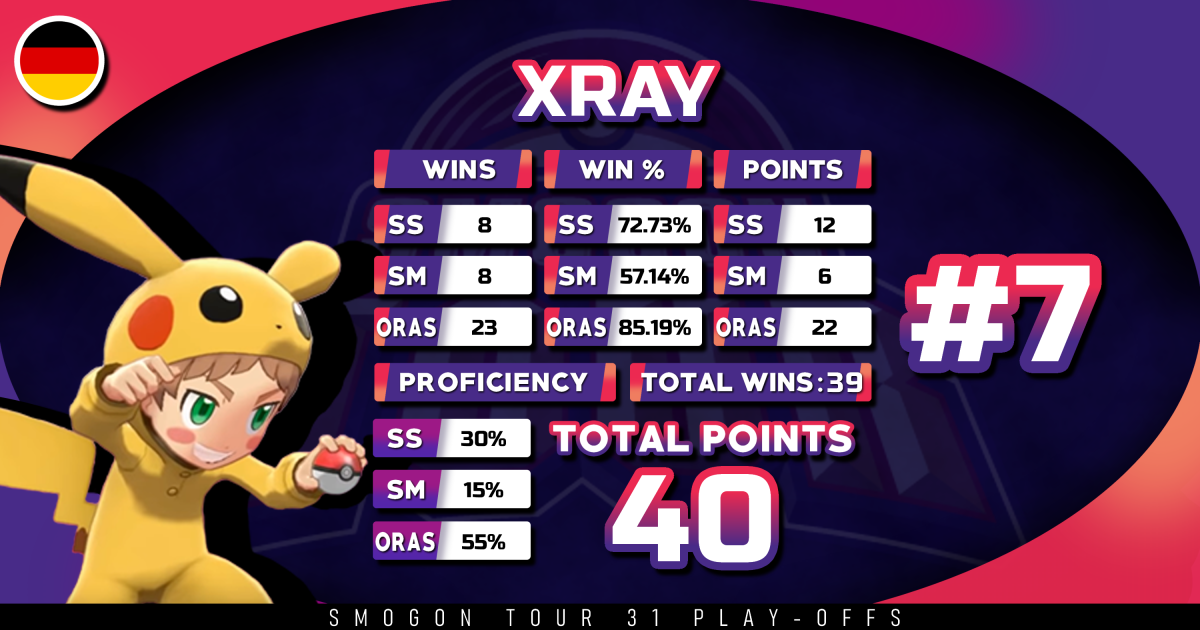 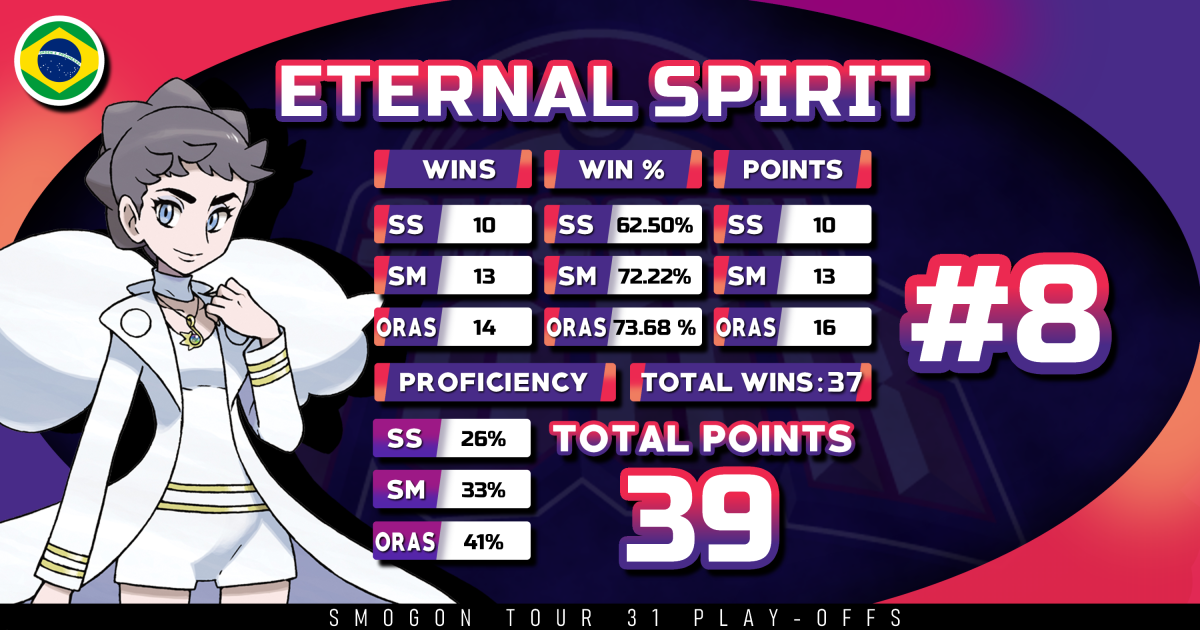 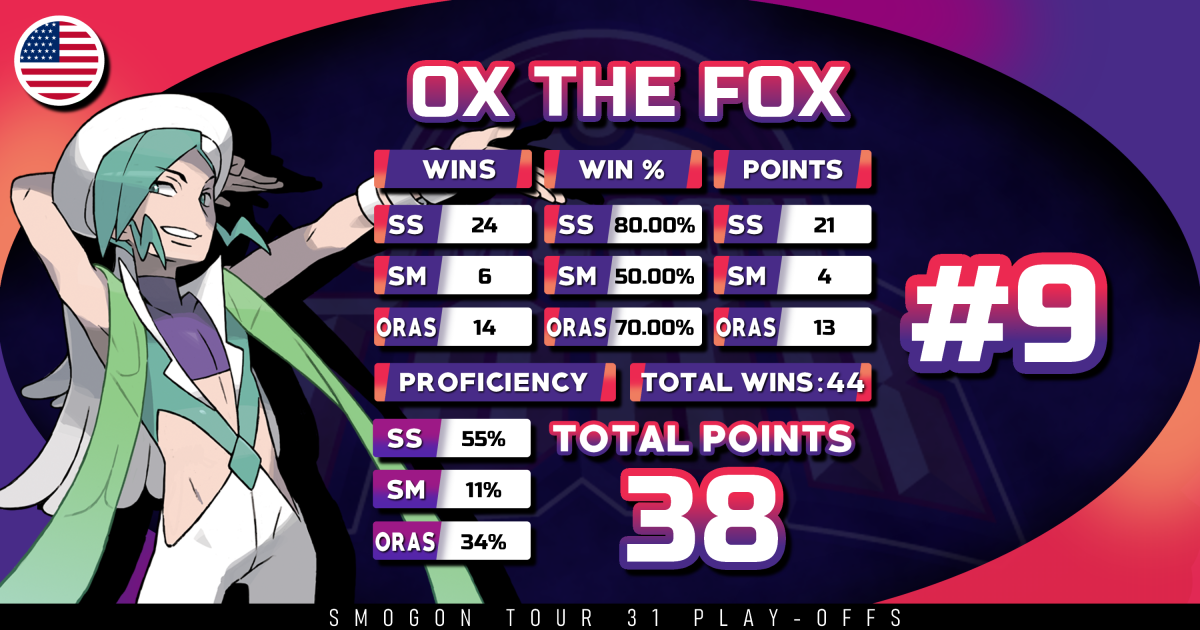 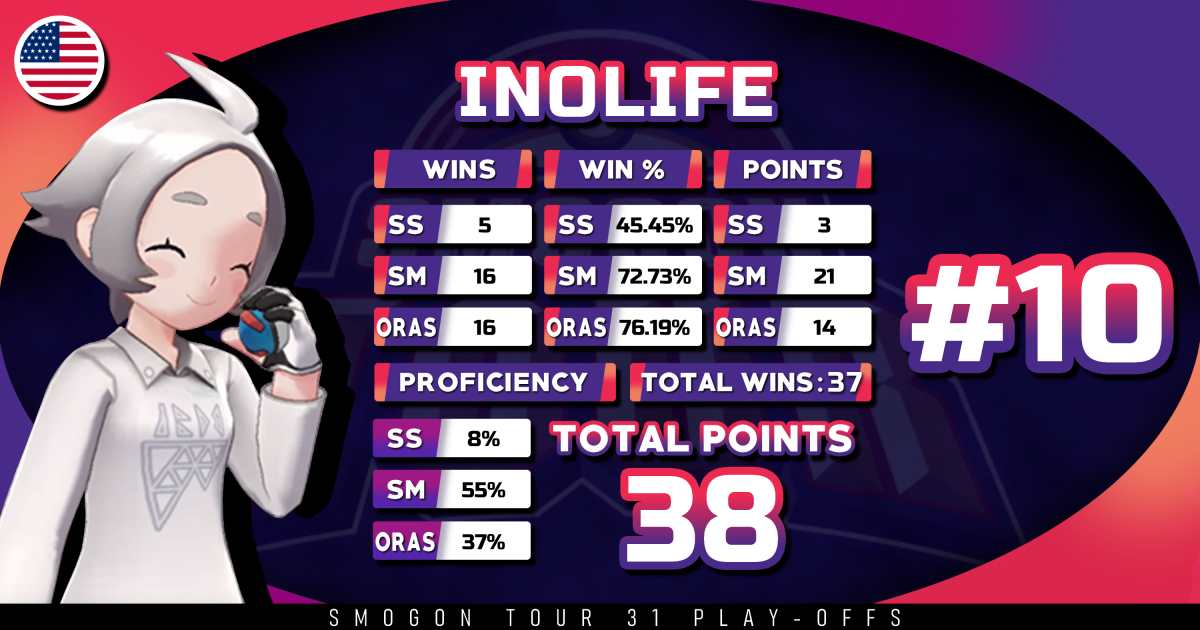 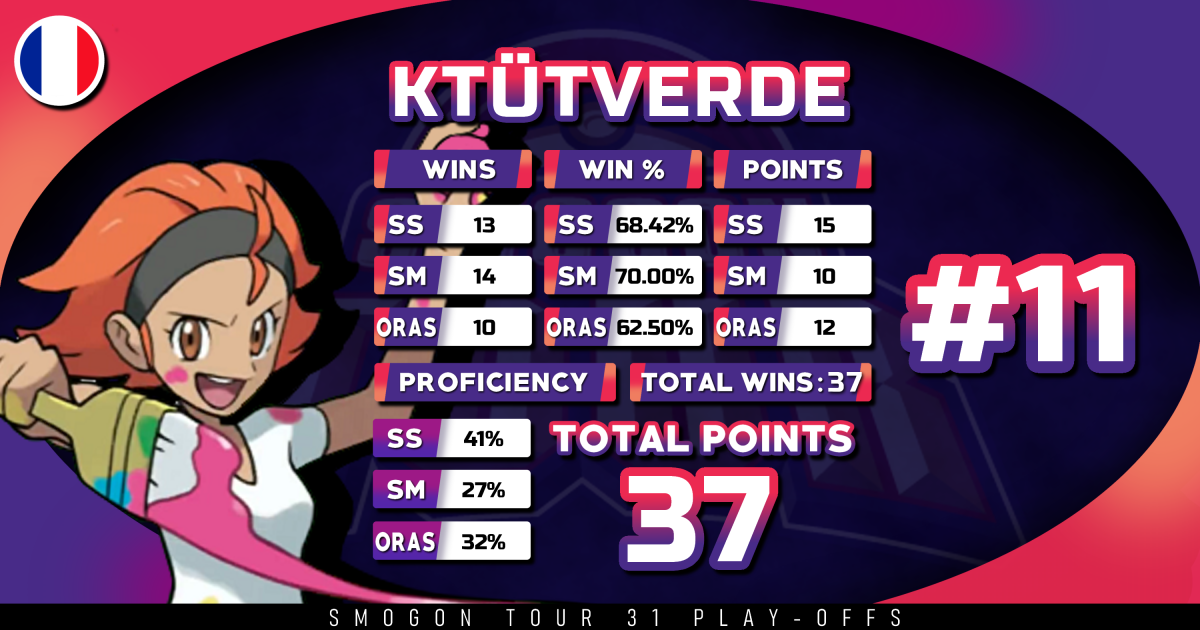 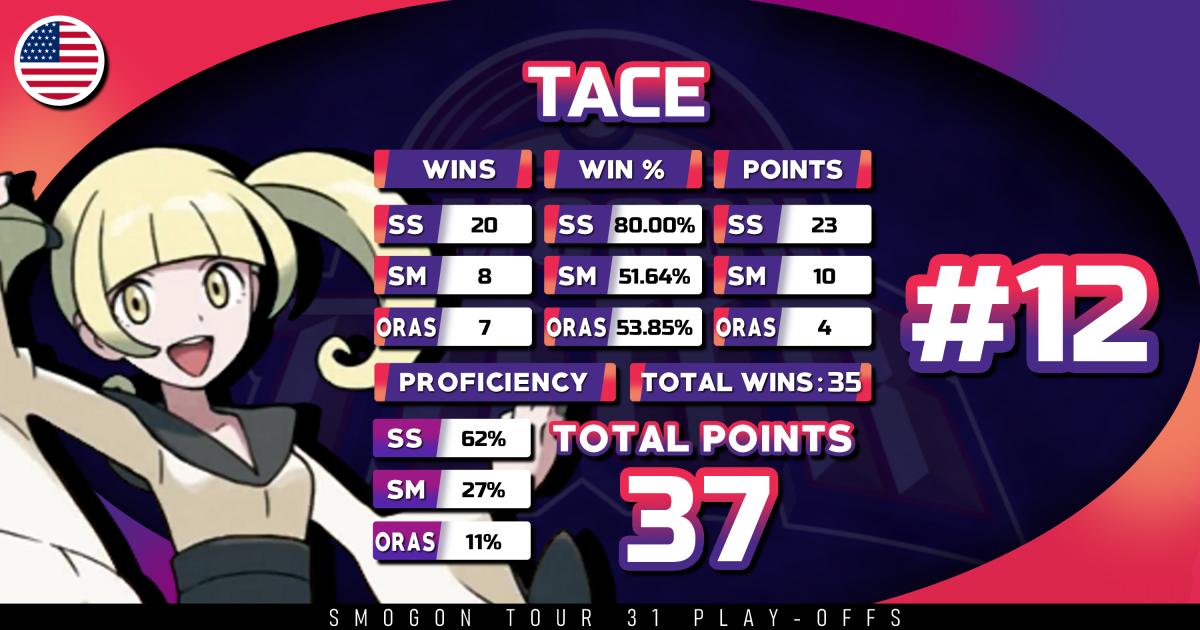 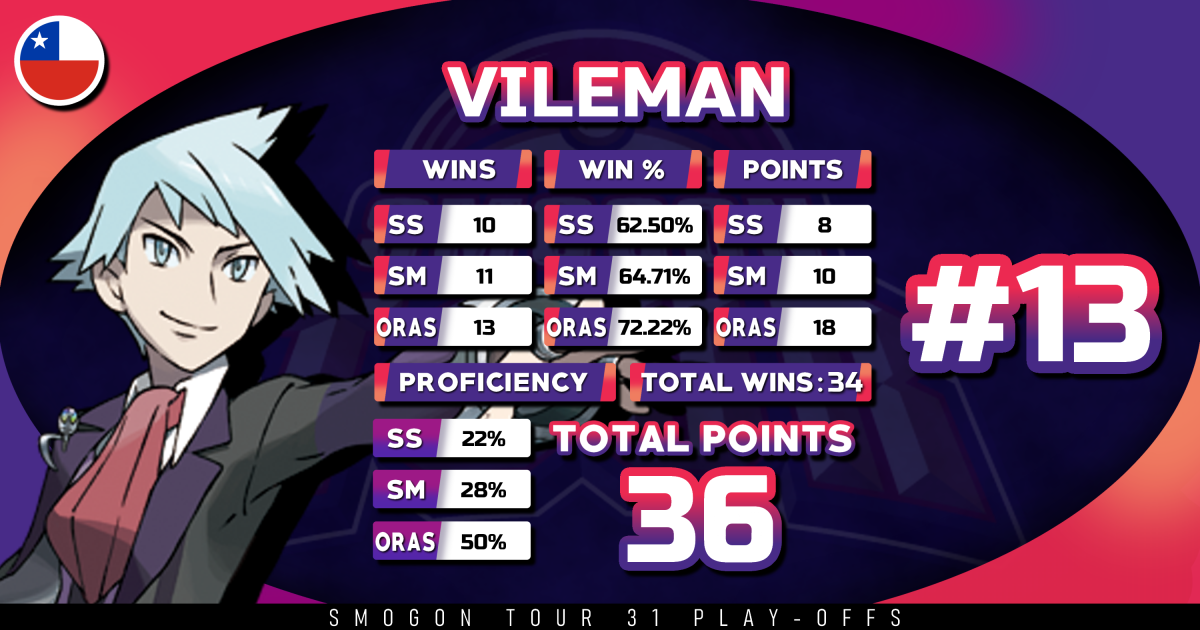 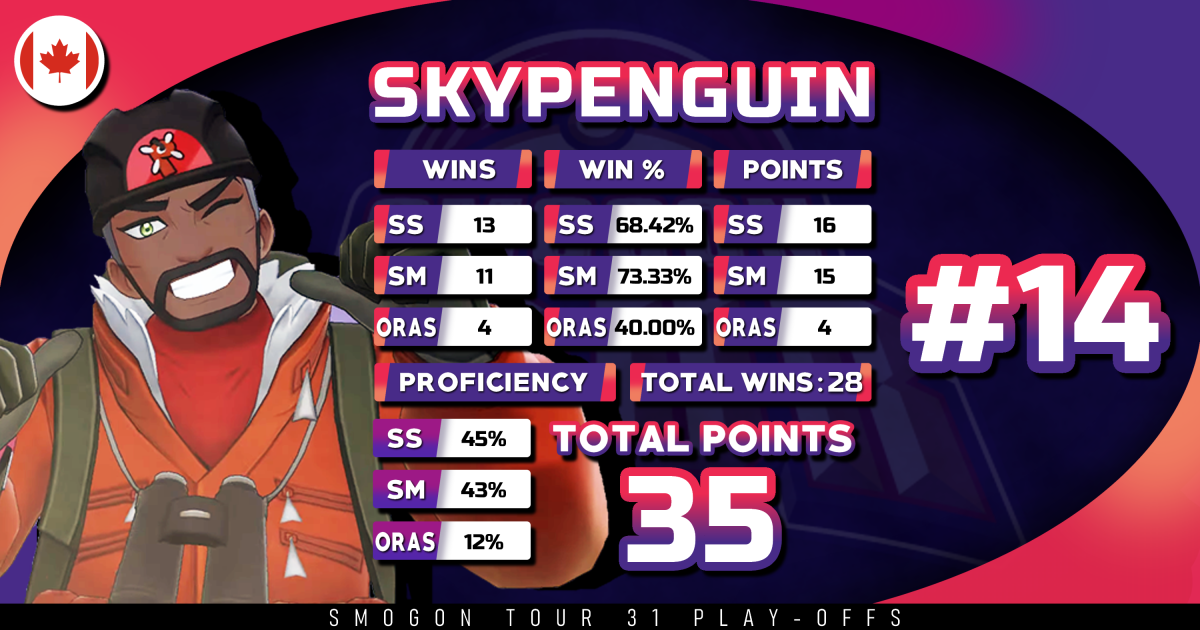 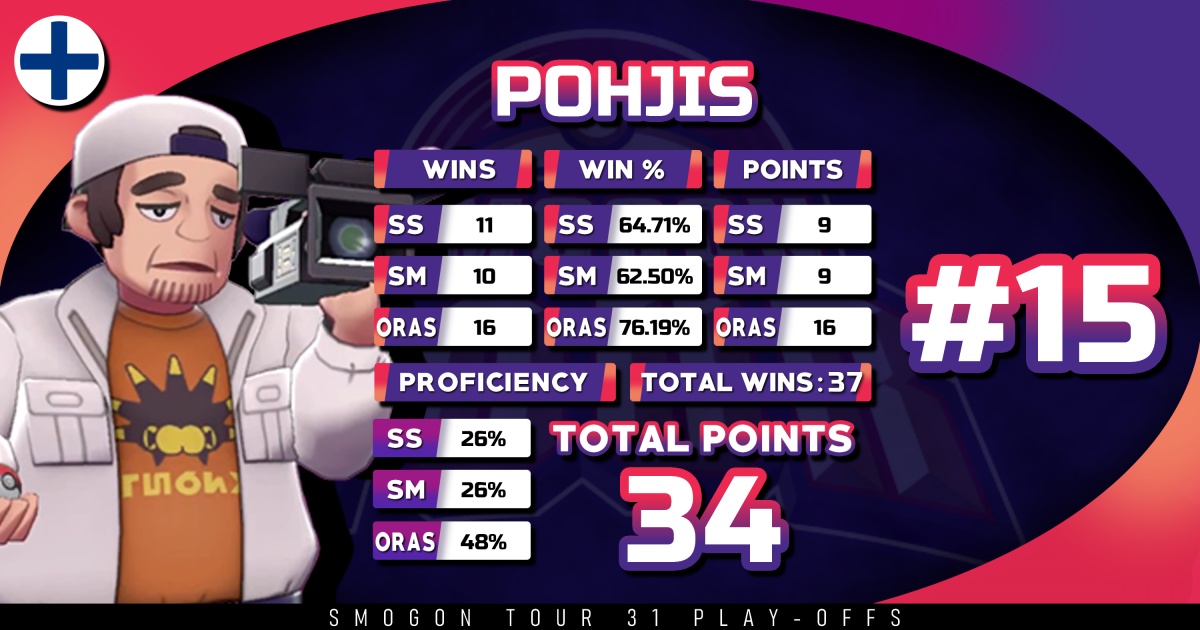 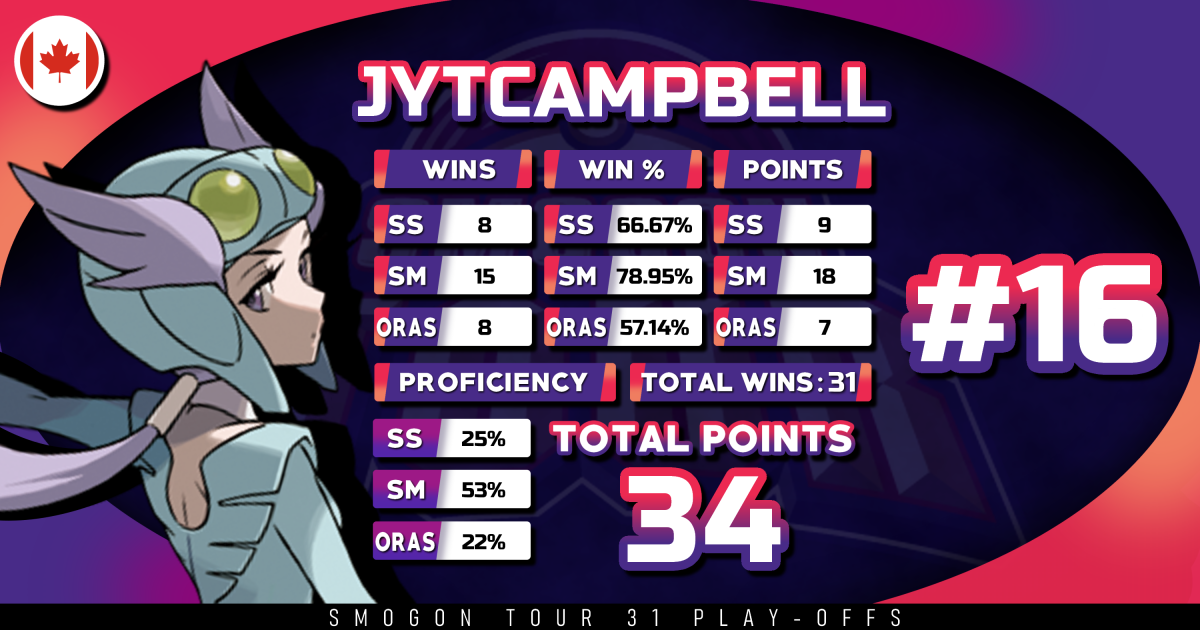 With the help of MiniArchitect and Blazenix​
Last edited: Jun 4, 2021

happy to see a lot of friends in here but especially rooting for joshy john xray gama vileman and tace. gl to everyone :)
Last edited: May 9, 2021

He wants to be smogon greatest,
There's just one thing he needed,
He will never give up, never rest,
Till he gets the pink trophy!

Trying time and time again,
From gens 4 to V triple I,
Makes the playoff every time,
But is always denied!

(A game so screwed,
He loses even if his opponents threw)

The final of season 30, is coming quick
To beat Empos all he needs
But the medi starts to kick
And then the axle mosa cleans

(A game so screwed,
I lose even if my opponent threw)

(A game so screwed,
I lose even if my opponent threw)

Edit: I figure you people don't want to look at a what I assume to be about a 30 line post, so I reformatted, wy even though no one asked for it
Last edited: May 13, 2021

Rooting for egalvanc he's going to win stour and wcop!

Rooting for giannis and skypenguin

NU Leader
Really great playoff pool, you guys owned me pretty hard this season and I'm excited to see what happens here. Gonna have to root for my friends Giannis, Tace, and Vileman, but it'd be great to see one of the veterans take home what they deserve (xray/sw/johnw/pohjis/tricking have all made it far before).

rooting for egalvanc, the best pokemon player ever

Arctic is not spelled "Artic" :/

1. Giannis Antetokommo-o (SS, SM) vs. 16. Pohjis (ORAS)
big fan of both. i think giannis is one of the stronger SS players right now, and while he has seemingly improved his SM and ORAS, i am not sure by how much. pohjis is a very well rounded and strong player in basically any tier he touches, but with regards to these three tiers, i think he is actually one of the best ORAS players in general. he's been consistently good at it for a long time now, but i think he flies under the radar due to not playing SPL... anyway, i think giannis is favored in SS and pohjis is a bit more favored in ORAS. SM is a toss up to me. i am not too familiar with pohjis's SM play, and i am not sure how much giannis has improved his SM since last stour. i am giving giannis a slight edge here due to the amount of time and effort he has put into this season overall and perhaps the new support from great northeast SM players like ABR... who knows. very close one, easily the highlight series.

2. SoulWind (SS, SM, ORAS) vs. 15. Jytcampbell
jyt is a solid player in all three of these tiers, whereas soulwind is a great one, especially in SM and ORAS. i think the SS matchup is reasonably close, but i would still favor soulwind based on overall skill and experience. in ORAS in particular i think sw has been really ahead of the curve for a long time now, being one of the main people to cement webs as the very dominant playstyle it was before this last SPL. i'm interested to see what he brings now that that trend has died down a bit.

3. Tricking (SS, SM, ORAS) vs. 14. Skypenguin
not too much to say here. i think skype is a good player and he has used some interesting tech choices, but tricking is just one of the best, especially in SS and SM. maybe the ORAS game comes down to some goofy stuff, as i don't personally think the italians know what they're doing in that tier.

4. John W (SS, SM, ORAS) vs. 13. Vileman
two friends. i'm super happy vileman made it this far. i think it's shown how much he has grown as a player, but he is still not close to the level needed to beat john w. definitely the level needed to start in wcop though hmmm team LA hmmmm... anyway, john's a master at all three of these tiers. especially in SS, but i think his SM and ORAS are certainly at the level needed to win the entire tour. vileman is actually pretty good at ORAS in particular, and i wouldn't be too surprised if he took this one off john. i still favor john there, but by a smaller margin than the other 2 tiers.

5. egalvanc (SS, SM, ORAS) vs 12. Ktütverde
while i am favoring egalvanc in all three tiers, i am not doing so by significant margins. i think egal is a great player who is underrated due to his somewhat strange ways. still, i also think he can have some consistency issues. when you average out his ceiling and his floor, i still think he's better than ktut, another player known to be a bit wild and unorthodox.

7. xray (SS, ORAS) vs 10. iNoLife (SM)
can't say i'm too familiar with inolife, but it's still hard to not favor xray in SS and ORAS, especially ORAS. xray is THE best ORAS player and at least a very good SS player. he sucks at SM though i won't lie. just by Sheet Looking i can see that inolife has an impressive 21 SM points, so i slightly favor him there over xray who has never seemed to do well in that tier. i think if xray gets his SM up to the level of the other two tiers, he will be a contender to win the whole tour, especially given the huge edge he has in ORAS over virtually everyone here.

8. Eternal Spirit (SM, ORAS) vs 9. Ox the Fox (SS)
two certified clickers for sure. ox is a fantastic SS player and super dominant on the ladder, though he hasn't hit his stride in tournaments just yet. luckily for him, gama has seemingly broken his stride, so i think he can take SS. gama was one of the more dominant players in the late ORAS and entire SM era, and i'm pretty sure ox isn't the most comfortable with those tiers. maybe something has changed over the course of qualifying for stour, but i still slightly favor gama. i think this series is super close, with the margins being pretty narrow in all 3 tiers.
rooting for john or tace to win it all, good luck everyone n_n

ETERNAL SPIRIT MAGICIAN WILL TAKE TROPHY but in Portuguese