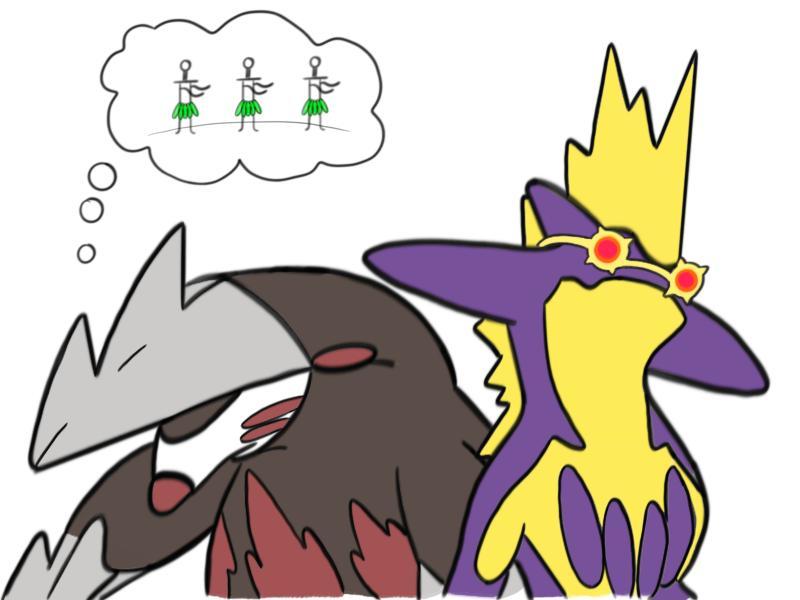 Banner by me :D

Introduction
Hi everyone! I was not a huge fan of gen8 (Z-moves are dumb), so its been around a year since I've seriously played anything more than unrated randoms. But, the pokedex getting reduced and the gimmicks getting axed (for now) was the perfect opportunity to return, so here I am. And boy am I rusty when it comes to building. That being said, I present to you one of the teams I've had more fun playing with that isn't super gimmicky. So far it's worked pretty well (went 26-4), but I've only reached the mid-1500s for what its worth. Importable at the end.

Started with the core of SD Excadrill and Specs Toxtricity, with Toxcricity breaking Corviknight and them both weakening bulky ground-types for each other. From there, I went with Sub-NP Hydreigon since both Excadrill and Toxtricity can handle fairies, and also it eats up most of the pokemon that come in to handle them. Guts Conkeldurr was kind of slapped on without much thought but its tanky and provides some degree of speed control. Seismitoad was added because Dracovish and it provides rocks, plus it gives this team some defensive presence. I opted for Scarf Gardevoir in the last spot for a revenge killer and the combination of fairy-typing and healing wish.
EDIT 1/13: Per suggestions, Hydreigon has been replaced by Mandibuzz for a more defensive presence.

The Underminer (Excadrill) @ Leftovers
Ability: Mold Breaker
EVs: 252 Atk / 4 Def / 252 Spe
Jolly Nature
Earthquake | Iron Head | Rapid Spin | Swords Dance
The starting point of the team, the main win-con, and just terrifying in general, we have Excadrill. EVs are here to maximize speed and power, and Leftovers are there for longevity. The lack of flying-types and bulky grass-types (HA Rillaboom when?) means Earthquake is a lot more spammable, and Iron Head smacks Fairies hard. Rapid Spin is here mostly for the +1 speed, but also has the nice utility of clearing hazards. At +2 the only slower thing that really handles it is Corviknight (who needs Body Press or Bulk Up to stop you), and if you get off a spin then offense kind of drops. This nickname was brought to you by Disney's The Incredibles (its a great movie and everyone should watch it).

*SCREAMS LOUDLY* (Toxtricity) @ Choice Specs
Ability: Punk Rock
EVs: 252 SpA / 4 SpD / 252 Spe
Timid Nature
Overdrive | Boomburst | Sludge Wave | Volt Switch
Toxtricity finds its place on the team as a way to handle Corviknight, serve as a secondary way to handle fairies, and also pivot. EVs are pretty standard, maximizing power and speed. Overdrive + Boomburst are the main attacking moves, thanks to Punk Rock's boost they hit really hard. Volt Switch lets Toxtricity get out on forced switches, although with the prevalence of Seismitoad and Excadrill it doesn't get used much (but if ground-types are dead I spam it). Sludge Wave is here to actually threaten fairies but is mostly filler since Toxtricity's movepool is barren. When it contributes it does really well, but its prediction reliant to say the least.

3fast5me (Conkeldurr) @ Flame Orb
Ability: Guts
EVs: 72 HP / 252 Atk / 184 Spe
Adamant Nature
Drain Punch | Mach Punch | Earthquake | Facade or Thunder Punch
Deer lord this thing hits hard. I run enough speed to beat out LO Clefable (who is difficult to switch into) which has also been clutch in 2HKO-ing Corviknight on the switch. Drain Punch gives you longevity and hits hard enough with Mach Punch here for speed control on faster threats. Earthquake lets you hit Aegislash and Toxapex, although its mostly here for Aegislash. The last slot is a toss-up between tearing through LO Clefable with 0 prediction or guaranteeing a 2HKO on Corviknight, I've been rolling with Facade and I've enjoyed it. Conkeldurr has won me about as many games as Excadrill, even without investment it can take a beating.

Frog and Toad (Seismitoad) @ Leftovers
Ability: Water Absorb
EVs: 252 HP / 252 Def / 4 SpD
Relaxed Nature
Scald | Earthquake | Toxic | Stealth Rock
Seismitoad is here for two reasons: Stealth Rocks and so Fishous Rend spam doesn't dismantle the team. Its also a solid pivot into unboosted physical attackers, thanks to its typing giving it only one weakness. Stealth Rocks are mandatory hazards that get chip on switch-ins. Scald burns everything in sight, and Earthquake gives you some offensive presence. Toxic helps wear down switch-ins like Rotom or opposing Seismitoads. I kind of wish Dracovish would get axed so I don't have to have a water absorb pokemon on every team to feel safe, so until then I patiently wait. "Frog and Toad" is a children's book series you should check it out.

Waifu4Laifu (Gardevoir) (F) @ Choice Scarf
Ability: Trace
EVs: 252 SpA / 4 SpD / 252 Spe
Timid Nature
Moonblast | Psychic | Healing Wish | Mystical Fire or Trick
Gardevoir is probably a really niche option but I think it rounds out the team well. It provides me with a stable revenge killer, reasonably powerful STABs, and Healing Wish to give Excadrill a second lease on life. Trace is the only useful ability but is clutch to steal Intimidate or Infiltrator. Common theme of dual STABs returns with Moonblast being the most spammable one. Healing Wish is the main reason Gardevoir is here; since I'm relying on my sweepers' typing to check certain threats, Gardevoir gives me more leeway in how I can play them. Last slot is kind of a toss-up; I've been going with Mystical Fire to be able to reliably damage steel-types, but Trick is an option to cripple opponents' defensive pokemon. Teleport is still fire.

- I don't have any real switch-in, though nothing really lets it in for free except for maybe Seismitoad (U-turn aggressively with Mandibuzz).

- Physical variants, especially those with speed, are somewhat troublesome. Mandibuzz handles basically all other variants.

) - Not so much a single threat but a core that gives me trouble, since mis-predicting with Toxtricity lets in some dangerous threats (and I always manage to guess wrong).


Considerations
As mentioned below, Rapid Spin and Defog are somewhat redundant so Rock Slide is an option on Excadrill. Shed Shell is an option on Toxtricity to avoid Dugtrio, while giving the option to switch moves. I have 0 idea how to deal with Rotom-Mow without rebuilding the team sadly. Any other suggestions people have are welcome.

Using Trace to copy Infiltrator and revenge kill Sub-Dragapult is a very neat strategy! Scarf Gardevoir really puts into perspective just how fast unboosted Dragapult really is- Gardevoir only outspeeds by 6 points. With that in mind, DD Dragapult (which I've been seeing more and more) kind of tears right on through your team. To that end, I think your suggestion to replace

Mandibuzz is a good one. You are right about the team being slow, but I don't think thats a huge issue. Excadrill can boost its speed, Conk has priority and Gardevoir is fast enough. Mandibuzz also gives you a source of U-turn, which I prefer to run if I'm going to be running Toxtricity. Toxtricity + Mandibuzz is a particularly fun core, and they cover each other's weaknesses fairly well.

Hope this helps. I'll try out using the team some more and let you know if my thoughts change.

(also, unrelated but I checked out your usage stats visualizer from your sig and its really neat, good stuff)

Heya! I agree with everything Chimp said, just want to expand on his ideas. First off, here's a standard Mandibuzz set that would work well for you.

I went with Foul Play here because it seems like a lot of big threats to your team are setup sweepers, and Foul Play will give you a chance to punish them. Mandibuzz also gives you a different source of hazard removal than Excadrill, so you could try this Excadrill set instead.

If you're willing to forego the speed boost, Rock Slide will give you a much easier time against Gyarados (who flat out dies if it tries to set up on you) and Corviknight, who you can now 1v1 once you hit +2 unless it runs Body Press.

Lastly, I personally recommend Facade on Conkeldurr. It hits nearly everything for insane damage, not just Clefable and Sylveon (still 2hkoing Mandibuzz for example). It's also a great safety pick if you don't know what may switch in.

Great job with the team!

nice team. the thing is:
jediment and chimp said everything.-remikkyu

Thanks chimp and Jediment for the suggestions! Shortly after posting I did a test run of the team with Mandibuzz and it definitely patches up most of the glaring holes in the team, OP has been updated to reflect those changes.

I'll give Rock Slide over Rapid Spin a go. My main hesitation is that VS offense Excadrill getting the speed boost can quickly turn the tide of a game (although I've had less and less opportunities to do so). Also if Corviknight doesn't run Body Press (or Bulk Up) then Brave Bird is at best a 5HKO which lets you get to +6 (and maybe even get off a Rapid Spin) at which point Iron Head is a 2HKO.
You must log in or register to reply here.
Share:
Reddit Pinterest Tumblr WhatsApp Email Link