WHY:
With a unanimous 4-0 vote, Genesect is now up for a suspect test! Long one of the most controversial Pokémon in AAA, its varied and difficult-to-predict offensive sets have made it a challenge to consistently answer defensively. Even moreso, its acceptable bulk, great defensive typing, and high Speed after set up make revenge killing it no easy task either. If Genesect is able to set up, it’s often off to the races.

The sheer list of viable abilities on Genesect speaks for itself. No Guard, Sheer Force (physical, special, and mixed), Magic Guard, Tough Claws, Tinted Lens, Guts, Primordial Sea, Serene Grace, and Galvanize all have merit, and depending on the set chosen and its specific coverage moves, its checks can vary wildly as well. It also has a Scarf Regen set to act as a fast and bulky pivot. Most offensive sets carry Shift Gear to give it terrifying Speed, and then choose from one of its 47 different coverage moves, including Zap Cannon, Blizzard, Leech Life, Iron Head, Blaze Kick, Flamethrower, Energy Ball, Thunder Bolt, Extreme Speed, Explosion, Steel Beam, and probably a few other moves I forgot to mention as well.

Genesect counterplay generally centers around two elements: identifying the set, and denying it a chance to Shift Gear. While I listed off 14 abilities and 47 moves, it can only run one and four, respectively, meaning that every set has its checks and counters. Heatran can handle most sets, save Tinted Lens and Primordial Sea. Other Fire-types like Cinderace and Volcarona can stomach any one hit and KO back, but need to be at high health to do so. Physical walls like Hippowdon can cover physical sets and special walls like Jirachi can cover special variants, but each fall to the other side. Passive walls struggle to handle it, as it is immune to poison, often does not care about burn, can out-boost the paralysis Speed drop, and can even recover against some like Blissey. A wide range of Pokémon can avoid the 2HKO from anything other than super effective coverage, but identifying what coverage it has, and firing back with enough power to KO, can be difficult.

Genesect, while great, is far from perfect. It struggles against several common Pokémon like Heatran, and since its STAB coverage is poor, is heavily reliant on the right coverage moves to sweep. On offensive sets it generally lacks recovery save Leech Life, making it difficult to set up or break multiple times. It often falls short of OHKOing threats not weak to its coverage, giving the opponent opportunities to hit back if healthy. No individual set is uncounterable with common Pokémon, nor particularly broken on its own, and it has rarely been impressive in the tour scene. However, none of that fully offsets the points listed above, making it a great candidate for a suspect test!

How (Suspect Details):
During a Suspect test, each player must climb the ladder until they've acquired the GXE necessary to participate in the voting. Primarily, everyone that participates needs to make an alt account following these guidelines:

With that all of that being said, it's suspect time! As usual, the actual voting will take place in the Blind Voting Forum, so posting anything other than proof of reqs and discussion isn't necessary.

only took us the entire generation to suspect it

Hey minor issue but when I tried to bring genesect’s ideal set to try it out it said I could only bring 4 moves, anyone know what’s up with that?

More seriously, genesect has always been one of those mons that can beat everything but never actually does. I still hold that it’s best current set is scarf regen because that one will always do something instead of blindly fishing for the perfect matchup. Will be interesting to see how the vote goes.

I was shocked to hear it was allowed in the first place. Heres to hoping it stays :^)

used this team, adapted from one of osake's OMPL teams.
idk where i stand but am probably leaning towards ban, this has a busted amount of set variety and obscene damage output on offensive sets like tinted and no guard, the ease with which it can run away with the game after a shift gear is kind of mad. if there's some catch-most check that i'm missing that makes it easier to handle then i'm not aware of it nor did i encounter it.

Moderator
in
s/o to UT for the busted team

Deleted all my teams last week while cleaning my PC and didn't have time to build a new team, so I used beauts sample (with bb over uturn on mandi, as there was a volca every two games)

Swiffix is right, that team (aka Genesect) is busted.
gg everyone just realized I forgot to post gg at the end of my games today, im so toxic plz ban

Genesect is only real if you let it be real in your heart. It senses your fear. Run. It shift geared

Lost a game due to my opponent making a massive outplay. They were losing, then they used an incognito tab to get to my nick and then forfeit my battle because I didn't register.
As for Genesect, I'm leaning towards no ban. 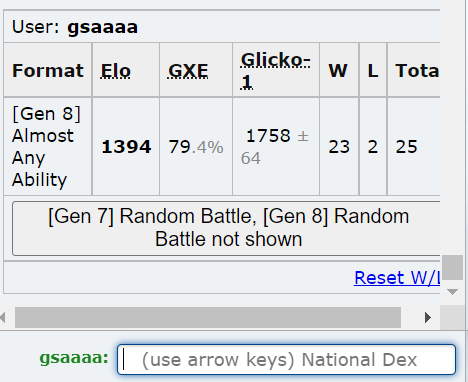 Divinity in the making

I don't like building for Genesect, it gives me a headache. I like bulletproof Heatran, but I would love to just not worry about that evil bug anymore.

But I don't think it will change the nature of most games, just pivoting into insane breakers, hoping your opponent doesn't have 1 of the 2 reliable answers to your specific mon, or that you just crit and win instantly.

I managed to get 6-0'd by lighting rod set up power trip corv, I will never recover from this

confirming as gsaaa swine, i used a combination of UT's rmt and the Ho the tea posted. not 100% sure how i feel about gene right now, but im leaning towards ban.

https://pokepast.es/337d81b7ff5718fe used this, might've been from ompl idr. leaning towards ban, randomly getting your fire punch rachi sniped by a +1 sflo blaze kick sucks, regenscarf is cool but i really dislike how fishy it can be used, not very competitive sometimes.

I am confirming as gsaaaprasn. I will be voting to ban Genesect
Last edited: Sep 20, 2022

Can't vote against the Prophecy

Isaiah said:
Just to address this, the set you posted is walled by unaware mandi, flash fire corv, etc. -> even pex and pert, usually cooked by shift gear gene sets, get some licks in
Genesect is dangerous for sure, but the set you posted isn't that scary
Click to expand...

FF Corv is bad. Pex and Pert are the main answers that is fair. These are all highly passive mons that limit teambuilding quite a bit

let me know if thats good ^^