Pretty based. Steel/Fairy is a well known godly defensive typing, and would essentially settle into the tier as a much more toned down version of Magearna. Its defensive utility is pretty rad, it blanket checks a large portion of the metagame too just based on the virtue of typing alone. Would easily become a top tier Pokémon, maybe even be TOO powerful.

We running out of ideas I see. I guess it is somewhat decent bulk? I can't really think of the merits of pure Fighting typing, and the lack of reliabke recovery makes me think AV would be the set of choice, making SR kinda moot. I don't even think it does much to hazard removal, especially if it is Corviknight. Pretty lazy buff if you ask me

I would be 1000% sold if this bad boy had U-turn. Right now I am pretty mixed. It's bulk, power and speed are all screaming "average" to me, nithing stellar on any particular front. Bug/Ground also faces the problem of oh no your Ground type can't even check Fire types? Not a very good look imo. Amazing buff for it in a vacuum but I think it just misses the mark on OU.

No hazard weakness + Rocky Helmet weakness while still doing everything it did before with Rock Head is very rad. Makes the Trick Room breaker a biger threat on Trick Room. It may even find itself on slow bulky teams due to its new found longevity. Thats about it. Do not expect it to be amazing, but if it wins it gets much easier to pilot on TR and very niche balance builds may have found a new breaker. On god, I'd add Sneak as well, or some speed so it sees use outside of TR.

Easily the worst Pokémon on this list. As an offensive threat, is isn't one. As a defensive Pokémon, it doesn't actually add much specific utility nor does it check a specific high profile offensive threat that overwise cannot be blanketed by the usual suspects. It baffles me that people are even hyping this Pokémon up.

Will also give BT89 the credit for this sub as they gave me the idea. So anyways, Aromatisse with this typing would act as a solid CM sweeper immune to Toxic and Taunt thanks to Aroma Veil while also having decent coverage in Mystical Fire and Moonblast being just overall a solid STAB move while it also gets Draining Kiss, so yeah this is solely being walled by Heatran. Still needs at least two boosts to setup (which ain't hard to get of course, but not that easy either if the opposite team has got some stuff to beat it like SpD Landorus-T or enough offensive pressure to wear it down). Another set worth highlighting is probably Nasty Plot, as while it's easier to wear down if not running Draining Kiss (which might be the way to go on this set), also helps it to take down Heatran more easily with +2 Thunder and can sweep against unprepared teams, sounds like it'd be the way to go as your fairy type alongside Sylveon and Latias overall, so I'm quite confident on this sub overall, even though it's mine.

Not a bad sub by any means, it's just quite boring and probably not needed to be fair, like sure now it gets a solid ability, but like, as G-Luke stated, this mon is so bad into defoggers it's not even funny, so it might prefer Assault Vest, in which case you might wanna run another AV user, just don't see it hitting OU and not even getting into B ranks (probably not even C+ if you ask me, it's just really niche).

Solid sub to be fair, great typing and not bad movepool by any means is actually quite nice, like sure it ain't hitting OU but it's a fun sub. Not sure if I'm voting for it though, but I'd like to see it on a re sub slate.

Magic Guard is Rock Head but better, and now it basically can go wild into fat and obliterates shit as it always does. Trick Room might also see a resurgence as others pointed out while it might see some usage on heavy VoltTurn-based balances so it can get into the field with ease, though I'd probably try it on Trick Room.

Honestly, the more I look at it, the more I start disliking it, but I still think Neutralizing Gas on it is quite sick, as gives it some sort of niche. It'd definitely have preferred U-turn or some utility move over Leech Seed though, this mon's just mid and this buff doesn't fix that at all.

Very fat calm mind wincon with a toxic and taunt immunity as well as a fantastic typing.

As a whole, doesn’t really take trick room to any new heights it didn’t have before, but thanks to its newfound immunity to the espionage gravel it can be used as a slow powerful breaker outside it.

My sub. The idea was a hazard setter that forced damage with circle throw. Granted spikes would probably be more powerful on this kind of sub.

I see where this is going, but realistically for a ngas mon Geezing would be more practical.

The new slate will come soon, so please be patient. Thank you! ^^

5 days as per usual

Guess Ill start it off then

Given my disagreements with ImpSquare over pivoting lando, it is with a heavy heart that I must admit that the standout on this slate for me is Mence. 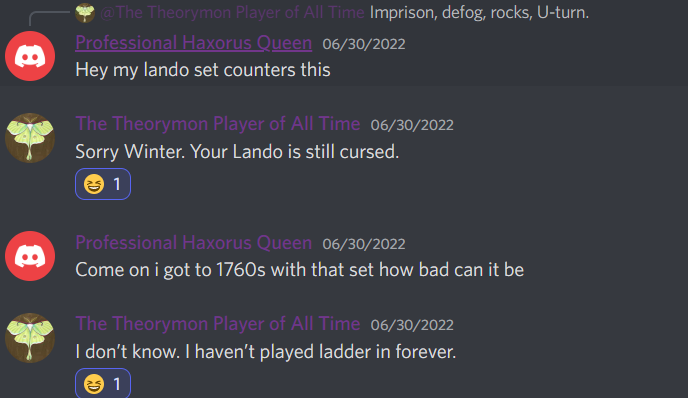 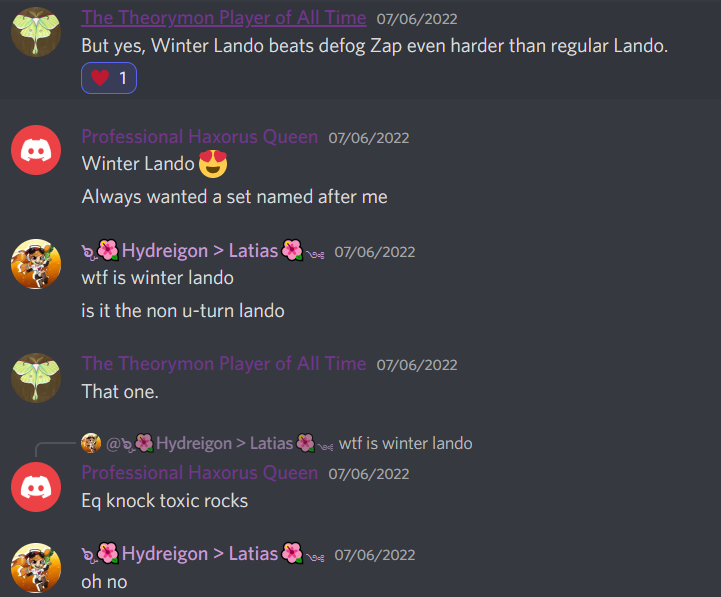 I think giving Mence U-Turn would allow its defensive sets to put in more work in the meta, while also giving CB sets a reason to be used. I famously dont vote in this mod, but if I did, I would be voting for Mence this slate as my serious pick.

For my not so serious second pick, there can be no option other than

thoughts on the rest of the slate:

Sounds a tad busted with that speed tier, but given the lack of SD and Brave Bird, I think it'll still be manageable. CB sets with Head Smash might be very good as nukes, however locking yourself into a STAB move just gives hax a free turn to set up. Idk, this one could go either way, could be amazing, or the lack of good flying STAB (dual wingbeat is ass dont @ me) and setup could hold it back more than anticipated.

Sub Jungle Healing CM Scald is probably an unset but that all Im gonna run.

MAN this thing is gonna win and I cant even be mad about that, Hurricane/flame/roost/(defog/u-turn) sets sound so fucking fun

All in all, a great slate imo. Jungle Healing Cune is the weak point for me, but even that sounds fun. And if theres any one thing to take away from this post, its that you should run Winter Lando ™ and praise me everytime you beat something you probably shouldnt.

I don’t really pay attention to Pets Mods, only SS Theorymons, so I will just give my two cents cause this looks like fun.

Jungle Healing sounds heat but it doesn’t solve all of its issues, (Pex, Being overwhelmed too quickly, vulnerability to Knock, etc)

Nah, Sheer Force boosted attacks off this things’ new 107 SpA would be too broken considering its speed tier and coverage. Plus it is overall not frail with 85/80/80 natural bulk. I don’t think anything other than Blissey is taking kindly to Dragon/Flying/Fire coverage. Pass.

We already have a fat DDancer in Dnite and it doesn’t compare to Multiscale. Defog U-Turn sounds interesting but it has to sacrifice alot of potentially useful moves like Flamethrower. Pass.

More speed control is always welcoming. Sky high base 140 Atk legit could make this a top threat and our best option for rkilling. I could imagine Stone Edge/Dual Wingbeat/U-Turn/and EQ, Rocks, or Roost. It has my vote.

Completely blanks Pex, checks Watershifu, and now speed ties with Zarude. SD CC OHKOs Chomp with rocks up. Sucker Punch to blank faster stuff. Ice Punch for Sylveon and Lando. EQ to completely blank Pex. Toxicroak’s new speed tier and its defensive typing leads to it getting more setup opportunities while also just being cool. It has my vote for sure.

idk.. sounds cool but cune has to give up on tect most likely..... while this would give it increase recovery and it could make it a very good heatran counter alongside that and have utility throught the game. Honestly i can see a niche this can have over fini as a CM user


uh... its pretty good... i think 10sp. attack was overkill but yeah... hurricane + flame hits a lot and it doesnt care about recoil that much especially with draco being the main one that isnt effected by sheer force. It is rocks weak so it has to give up turns roosting but i think if it was just that without +10 sp. attack it would be good but managable.

salamence now has 115/80/80 bulk which is pretty good... and the 3 attack mence from UU i think can see some usage. This also helps DD salamence in that its easier to setup. IDT u-turn is useful at all in my opinion what so ever.

this allows archeops to be good speed control esp with boots and 3 attacks in DWB, eq and stone edge which allows it to hit a lot of the meta. 130 speed is pretty good in that it allows it to beat torn-t, weavile, coba, raikou, starmie, and tie with koko. Dazzling also protects it from aqua jets from urshifu-r, bullet punch from scizor, and ice shard from weavile which is pretty good. THis seems like a pokemon who use strong attacks to threaten the teams but idk...

105 speed with a new 120 BP stab which allows it to hit a lot of mons harder. SD 3 attacks with gunk shot, close combat, or knock off and ice punch can allow it to threaten a lot of teams that lack toxapex. It has a lot of potential on rain teams thanks to dry skin able to negate the LO recoil.

currently plannig on toxicroak and archeops