1. Cam vs. 9. Accelgor: Hard one to call, but I'm going with the upset pick here. Cam's series was the definition of solid. He overcame getting webbed g1 by leaning on trusty Noivern + Haxorus builds in game 2 and 3 and slowly choking GW out with his favorable matchups. I think there's definitely a way for Accelgor to take advantage of Cam's more conservative builds so far, but I'm basing this prediction mainly on their individual motivation levels. Accel needed some really significant luck to squeak past Amane in the first round. Additionally, I know that I would be decompressed as hell after winning UUPL like Accel just has and that's causing me to give a slight edge to the #1 seed.

3. solonor24 vs. 6. Xiri: Another close series that should be very exciting to watch. Both users rolled up with some neat teams in round 1. Solo taught me there's apparently a Pokemon called Frosmoth, while Xiri rolled up to g2 with what was presumably a SubSD Pangoro. With the help of some aggressive plays and one or two lucky breaks, solo won rather handily. Meanwhile, Xiri's series was filled with some weird plays on both sides. This'll come down to the effectiveness of some of solo's aggressive moves, but I believe that Xiri's experience and unpredictability of his own will allow him to take this one.

4. pokeisfun vs. 5. Highways: As opposed to the past where you knew what you could expect from pif, he has become a nightmare to prep for in SS. He's branched out to using and building some very effective bulky offenses, but the risk of running into a really nasty stall that only he can come up with remains. His SS UU metagame knowledge is second-to-none as evidenced by putting a spotlight on mons like Stunfisk-Galar. Highways played a solid but not very remarkable series in round 1 and I don't know too much about him as a player overall.

It's really sad that I have to face off with Sabella as his enthusiasm for this tier during UUPL is a big reason why I started getting involved in this gen. He's also been super helpful throughout all stages of this tour by providing ideas, teams and support so it's a shame one of us has to go out.

Can people please post when theyll be playing, pretty sure a ton of people want to view these high level UU games

SOMALIA said:
Can people please post when theyll be playing, pretty sure a ton of people want to view these high level UU games
Click to expand... 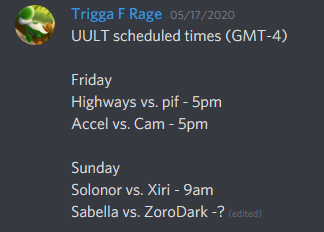 We usually pin times for tour games in the #tournament_discussion channel of the UU Discord, so you or anyone else can keep an eye out for this sort of thing.

SOMALIA said:
Can people please post when theyll be playing, pretty sure a ton of people want to view these high level UU games
Click to expand...

I will be playing Saturday probably morning est

Lost in a really disappointing way because the game would still be very open, but it's just the game we play I guess. Thanks hs solonor24 Sabella CBU for all the help with prepping, and my Brazilian friends for the support.

Hoping either solo or sab win it now

Highways said:
Lost in a really disappointing way because the game would still be very open, but it's just the game we play I guess. Thanks hs solonor24 Sabella CBU for all the help with prepping, and my Brazilian friends for the support.

Hoping either solo or sab win it now
Click to expand...

Yes definitely disappointing, I was lucky where it mattered in the last game. You played better than me, at the very least in the third game if not all, and will win more games in the future...good job to your friends too for fairly good prep overall

Cheers pdt and martha for helping and a sabella for testing teams.
sorry to be anticlimactic and choke a game i should have comfortably won

Moderator
won in 3 ggs, hope we get to link up again for another tour

won vs zoro gg bro. please dont watch g3 man im so bad for that one

between heaven and earth

won vs solo in 3. Shoutout Viv and Juuno testing with me an endless amount of games with that third team and helping me get it right. Sorry for ABR moments =/

ggs man. was a good run, wish i had played some of those turns different but hey what can u do.It's all apart of the learning experience ig. Shoutouts Accelgor Anish Highways Ramolost for the test games, and shoutouts to everyone else who gave me moral support.

Cant really be to upset with any of the people remaining to win, they are all deserving. I gotta root for Accel tho, its your time my guy

won! with quite some luck g2

between heaven and earth

Held this off until after Rain vote. Deadline is Sunday 14th June! Good luck! ​

Lost. Thank you to all the people that tested with me the through the tournament.


Won! With some fortune

Thank you to:
I had more supporters but these were the ones who gave me tests and stuff (plus Somalia because he gasses me up a lot)

Since this is ladder tour, shoutout to some of these lesser known guys on the ladder - they could have easily won the tour too if they wanted to participate: